Fran Smith is a writer, editor, writing coach, and communications consultant. Her work has appeared in O, The Oprah Magazine; Redbook; Salon; Good Housekeeping; Prevention; Health; the Los Angeles Times; USA Today, and dozens of other publications and websites. She has won many awards for medical reporting, health care investigations, and feature writing, and shared a Pulitzer Prize as a reporter at the San Jose Mercury News. Fran co-authored the first reporters' guidebook published by the Association of Health Care Journalists, and she is a frequent speaker on the power of storytelling, health care writing, and effective communications. A history buff, she is also the author of Breaking Ground: The Daring Women of the YWCA of the Santa Clara Valley, 1905 - 2005. (YWCA: 2005). She lives in New York.Sheila Himmel is a Psychology Today blogger and co-author of Hungry: A Mother and Daughter Fight Anorexia (Penguin, 2009). She is a contributor to Restoring Our Bodies, Reclaiming Our Lives: Guidance and Reflections on Recovery from Eating Disorders (April 2011). Sheila writes for publications ranging from the New York Times to Eating Well to IEEE Spectrum: The Magazine of Technology Insiders. Her work has appeared in USA Today, the Washington Post, the Robb Report, M Magazine, and the online magazine Obit. As a restaurant critic of the San Jose Mercury News, Sheila won a James Beard Foundation Award for feature writing. She won awards from the Association of Food Journalists and the Associated Press News Editors Association, and uncovered fraud at a prominent Silicon Valley restaurant, revealing its longtime substitution of pork for veal. She lives in the San Francisco Bay Area.Activist, anthropologist, author, caregiver, ecologist, LSD researcher, teacher, and Zen Buddhism priest -- Joan Halifax is many things to many people. Yet they all seem to agree that no matter what role she plays, Halifax is consistently courageous and compassionate. Halifax runs the Upaya Zen Center in New Mexico, a Zen Peacemaker community she opened in 1990 after founding and leading the Ojai Foundation in California for ten years. Her practice focuses on socially engaged Buddhism, which aims to alleviate suffering through meditation, interfaith cooperation, and social service.As director of the Project on Being With Dying, Halifax has helped caregivers cope with death and dying for more than three decades. Her book Being With Dying helps clergy, community activists, medical professionals, social workers and spiritual seekers remove fear from the end of life. Halifax is a distinguished invited scholar of the U.S. Library of Congress and the only woman and Buddhist on the Tony Blair Foundation's Advisory Council. She resides in Santa Fe, New Mexico. 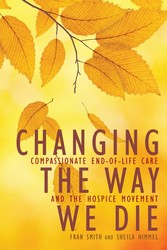