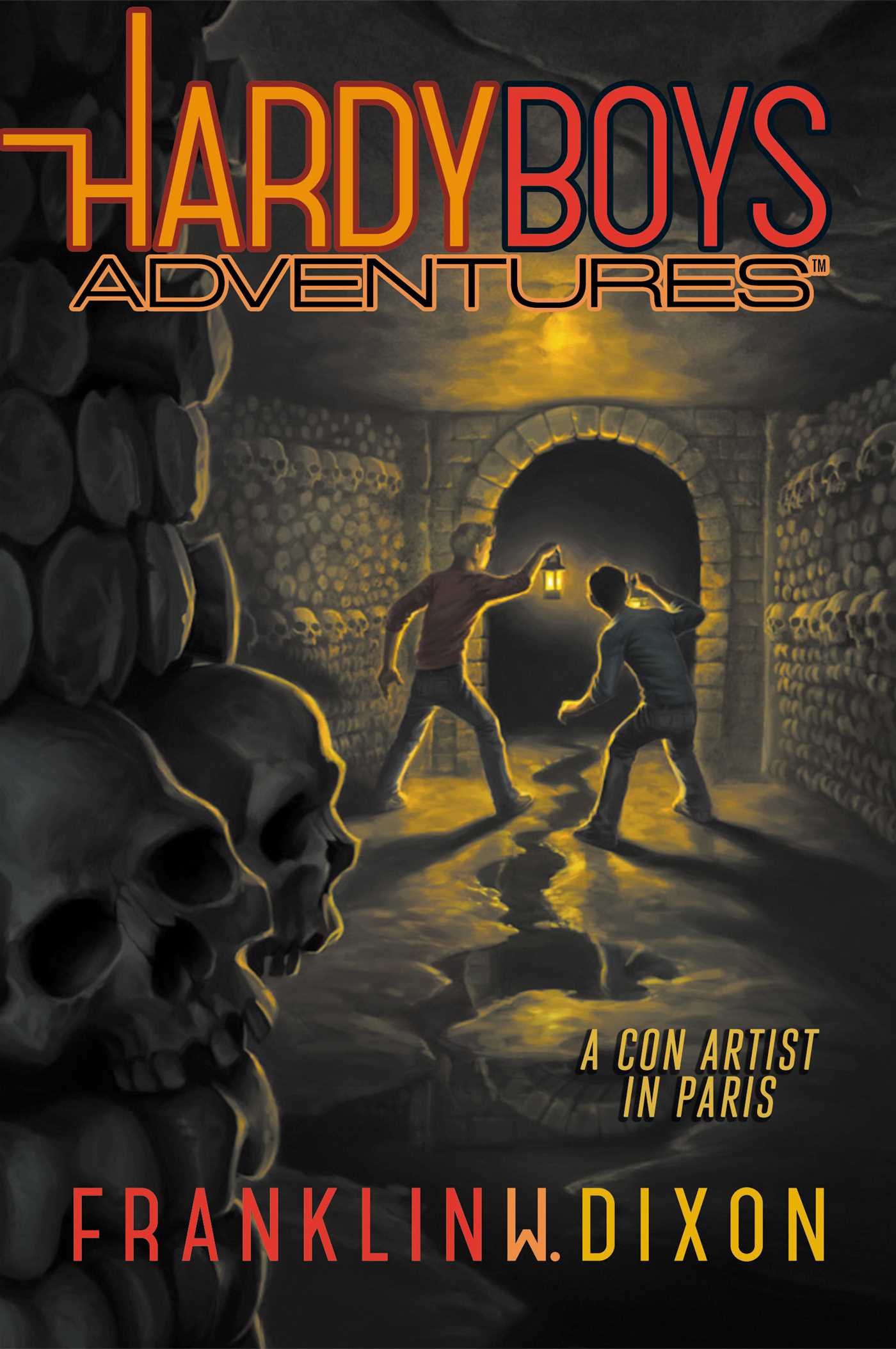 A Con Artist in Paris

Brother detectives Frank and Joe follow a crooked trail of artistic deception in the fifteenth book in the thrilling Hardy Boys Adventures series.

The Hardy Boys are visiting Paris! Joe is excited to check out all the street art he’s heard about. And Frank can’t wait to go to all the museums he’s researched.

On their very first day in the city, the brothers are woken up early in the morning by fireworks. But these are no ordinary fireworks. They are a part of elaborate cover for the heist of a priceless artifact. What’s worse, the theft seems to have been orchestrated by Joe’s favorite street artist, an unidentified outlaw and activist that goes only by the name Le Stylo. Everyone seems sure that it’s him, but the Hardys are suspicious. From everything they know about Le Stylo, the crime is out of character. Sure, he makes a habit of provoking the authorities, but he’s an activist; not a thief. Could the artist known for his mystique have been framed? Frank and Joe are determined to find out.

A race to find the real thief has Frank and Joe following clues that lead them all over Paris, where they hobnob with rich art patrons, travel in a car that can only be described as a small Batmobile, and explore the extensive Catacombs under the city. Deep in the world of artistic deception, the boys have to wonder, are they in over their heads?

A Con Artist in Paris 1 EEK! FRANK
THE FIRST THING I SAW when I stepped onto the streets of Paris was a giant rat.

“Sweet!” my brother Joe shouted, whipping out his phone to snap a picture of the impossibly large rodent climbing into a sewer in the middle of France’s capital.

“I’ve never seen someone so excited about a rat before,” I said. “Or seen a rat wearing a red beret and a burglar mask, for that matter.”

Lucky for us, this rat was a five-foot-tall cartoon character running off with a baguette, stenciled on the wall of a boulangerie—that’s French for “bakery.” The artist had layered three different stencils on top of one another so the rat, the baguette, and the beret and mask were all different colors.

“All right! We haven’t even been here five minutes and we’ve already seen a piece by Ratatouille. He’s one of the coolest artists working the streets of Paris,” Joe gushed.

Our detective dad, Fenton Hardy, had been invited to speak at the annual International Professional Association of Detectives (IPAD) convention, and he’d invited us to tag along for a little sightseeing. We probably could have told all those professional investigators a thing or two about detecting ourselves—I mean, we are the world’s foremost underage amateur PIs. Well, at least the foremost in Bayport, our hometown, where we have a well-earned reputation as teenage detectives extraordinaire. Detecting runs in our blood, apparently. IPAD wasn’t interested in what Fenton’s kids had to say, though, so we got a week off to explore one of Europe’s most beautiful cities.

Not even a sleepless nine-hour red-eye flight across the Atlantic could press the snooze button on my excitement level. All that classic art! Architecture! History!

“A brand-new piece by Cosmonaute!” Joe had his phone aimed across the cobblestone street to a simple tile mosaic of a UFO landing on the top story of a brick building that had to be hundreds of years old. “I don’t think anyone’s even posted this one yet.”

The artist had climbed all the way up to the top of the building and glued the square tiles to the wall in the shape of a flying saucer made out of old eight-bit video graphics, like the ones from the very first arcade games.

Joe looked stoked as he uploaded the picture to his Instagram account, adding the hashtags #cosmonaute #streetart #paris and #streetarthuntparis so other street art “grammers” from around the world could see it too.

“I can’t believe people come to a city with a world-class museum like the Louvre just to take pictures of cartoon rats and spaceships.” I rubbed my confused, jet-lagged eyes. “Here we are in one of the most historic places on earth, surrounded by amazing landmarks, and all my brother wants to see is the graffiti and arcade spaceships.”

“It’s not just graffiti, dude,” he said seriously. “It’s street art. People like Ratatouille and Cosmonaute are creating original works of art, and they’re using the environment around them to tell a story at the same time. There’s an international pop art renaissance going on, and Paris is its epicenter.”

My brother’s head was big enough already without me complimenting him, but I was impressed with how much thought he’d put into it. I was usually the one lecturing him on things like art appreciation!

“I get it, but we’re in Paris! Some of the most treasured masterworks ever created are here. Van Gogh, Monet, Picasso, Dali. They all lived and painted right here.”

“Well, Snooty McArtFace, Ratatouille painting himself all over Paris turns the whole city into an interactive museum, and you don’t have to wait in line or go to a hoity gallery to see it,” Joe retorted. “Besides, some people think artists like Le Stylo are masters.”

“I . . .” I shut up is what I did. “You got me there. I can’t talk smack about a guy who got away with turning the most famous clock tower in the world into a smartwatch.”

Le Stylo’s handle meant “The Pen” in French, and he’d been making international headlines for all the crazy places his outlaw art installations had appeared. Like the time he projected digital numbers and icons over the Big Ben clock tower in London and then changed the sign so it said iBen as a commentary on historical preservation in a tech-driven society.

The whole world was Le Stylo’s canvas, and he used it for activism, too. The saying that inspired his name—the pen is mightier than the sword—also inspired his art. His antiwar stencils of soldiers wielding his signature feather fountain pen instead of guns had appeared all over the world on government buildings, police headquarters, and even in war zones.

“My favorite is when he used suction cups to scale that mirrored office building in Texas wearing a mirror-covered jumpsuit so no one would see him,” Joe said, referencing Le Stylo’s protest of a big oil spill the year before.

“Stenciling a flock of oil-covered pelicans crashing into that big oil CEO’s window took talent and guts,” I agreed, wondering how terrifying it must be to climb a skyscraper like you were Spider-Man. That kind of daredevil stuff was definitely more up Joe’s alley.

“I heard he donates all the money from his paintings to charity,” Joe shared. “I bet Vincent van Gogh didn’t even do that.”

“He might have if he hadn’t died penniless and unknown,” I informed my brother.

“Stylo’s definitely got VVG beat in the popularity-while-alive contest,” I observed. “It’s amazing how someone can turn themselves into just about the world’s most popular artist without anyone discovering their real identity.”

Le Stylo wasn’t just an artist/activist/prankster. He was a mystery. And no one appreciates a good mystery as much as a Hardy boy.

“I can’t wait to check out the exhibit with his new work at that Galerie Simone place near the hotel,” Joe said. “That’s one hoity gallery I don’t mind waiting in line for.”

It was a different place near the hotel that I was excited to wait in line for. A medieval royal palace filled with over 650,000 square feet of France’s most priceless treasures.

A Con Artist in Paris