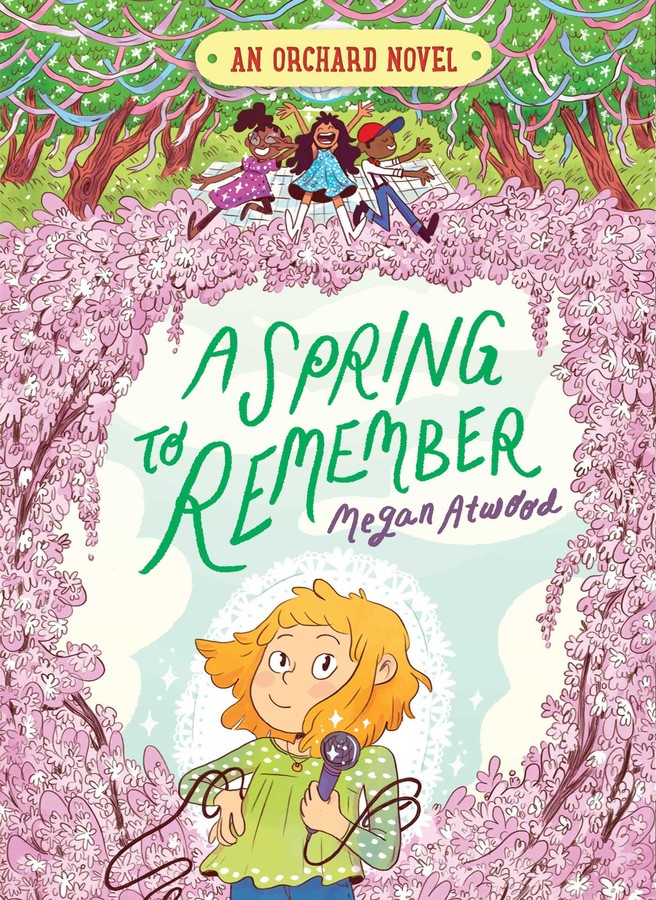 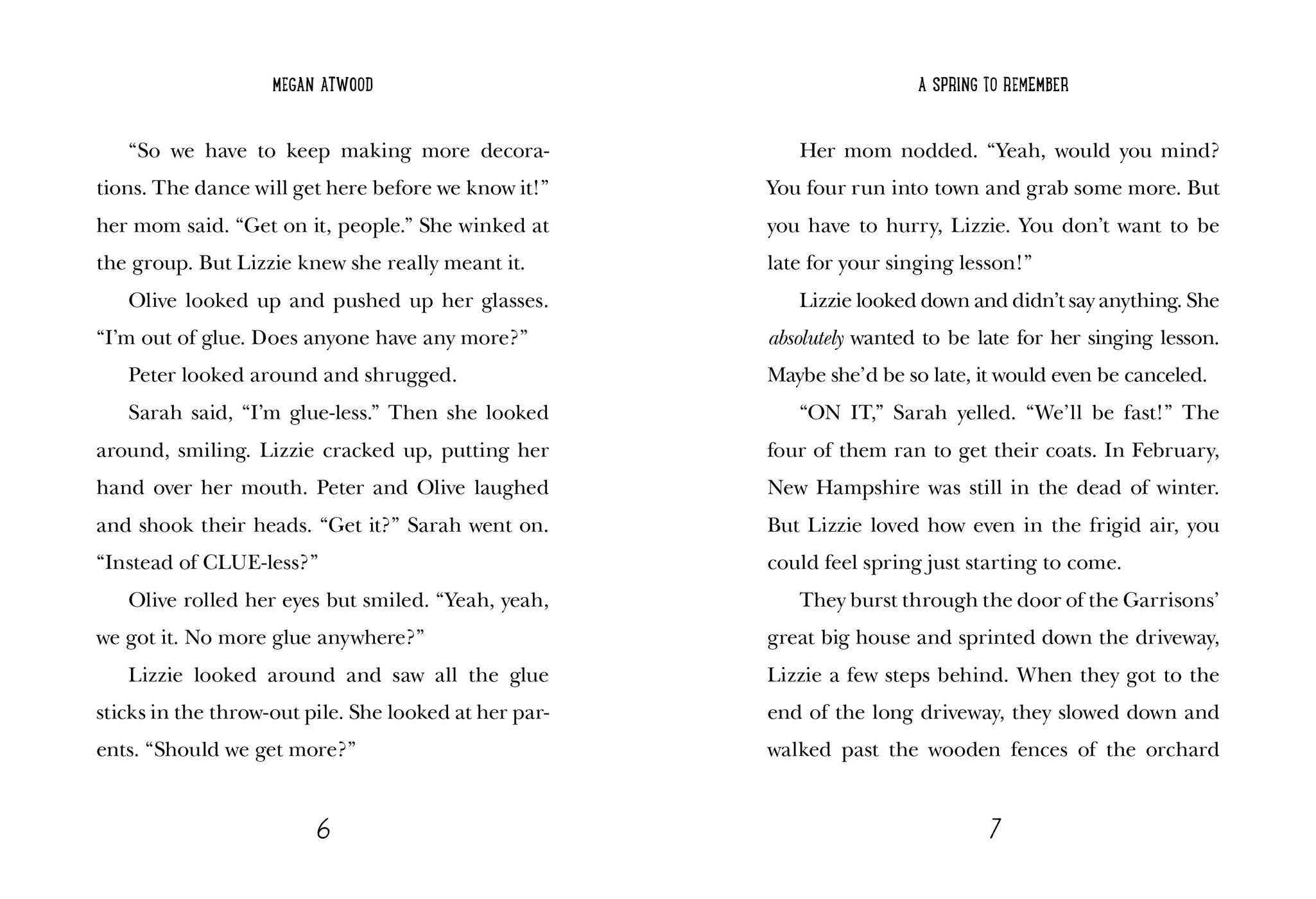 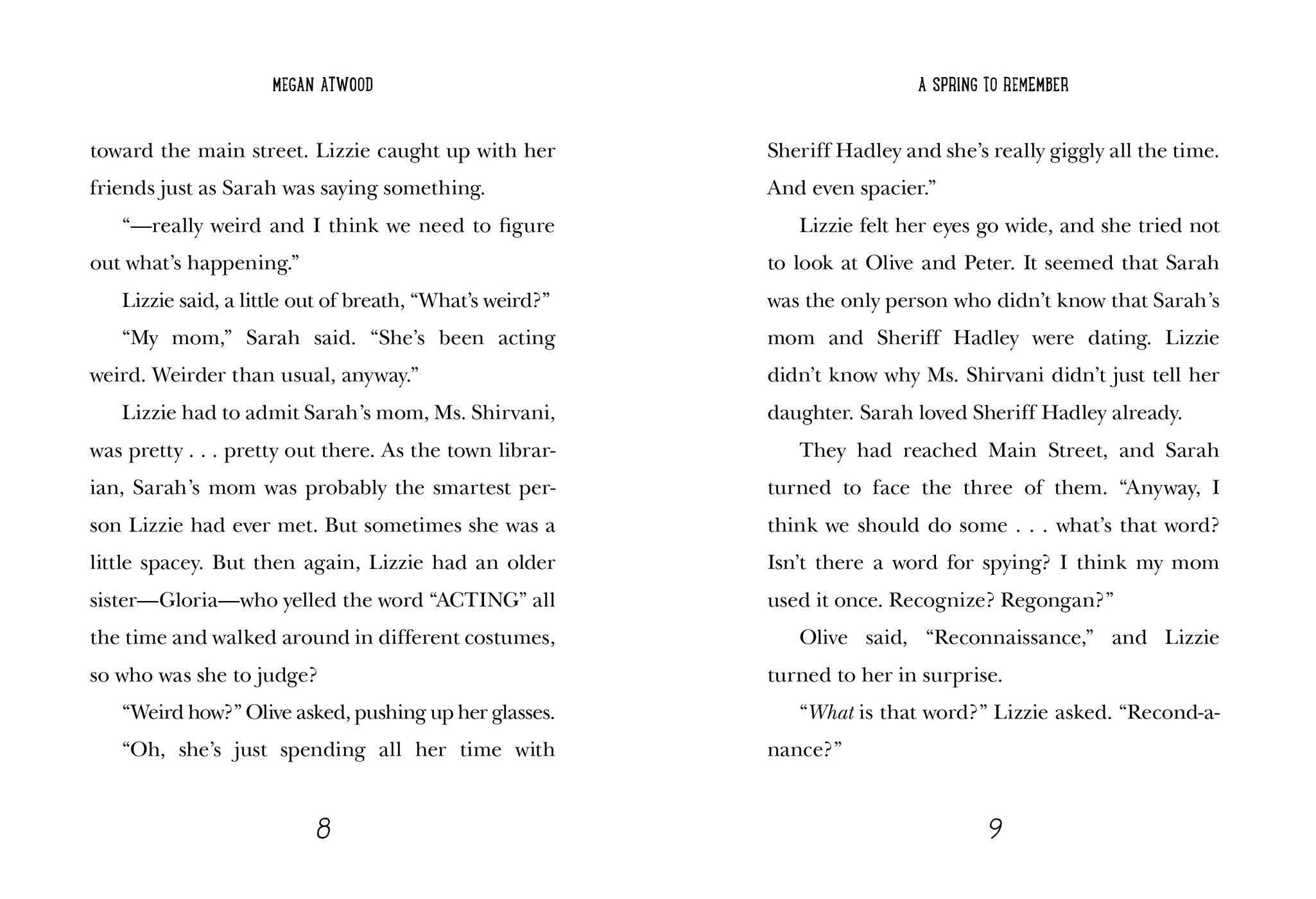 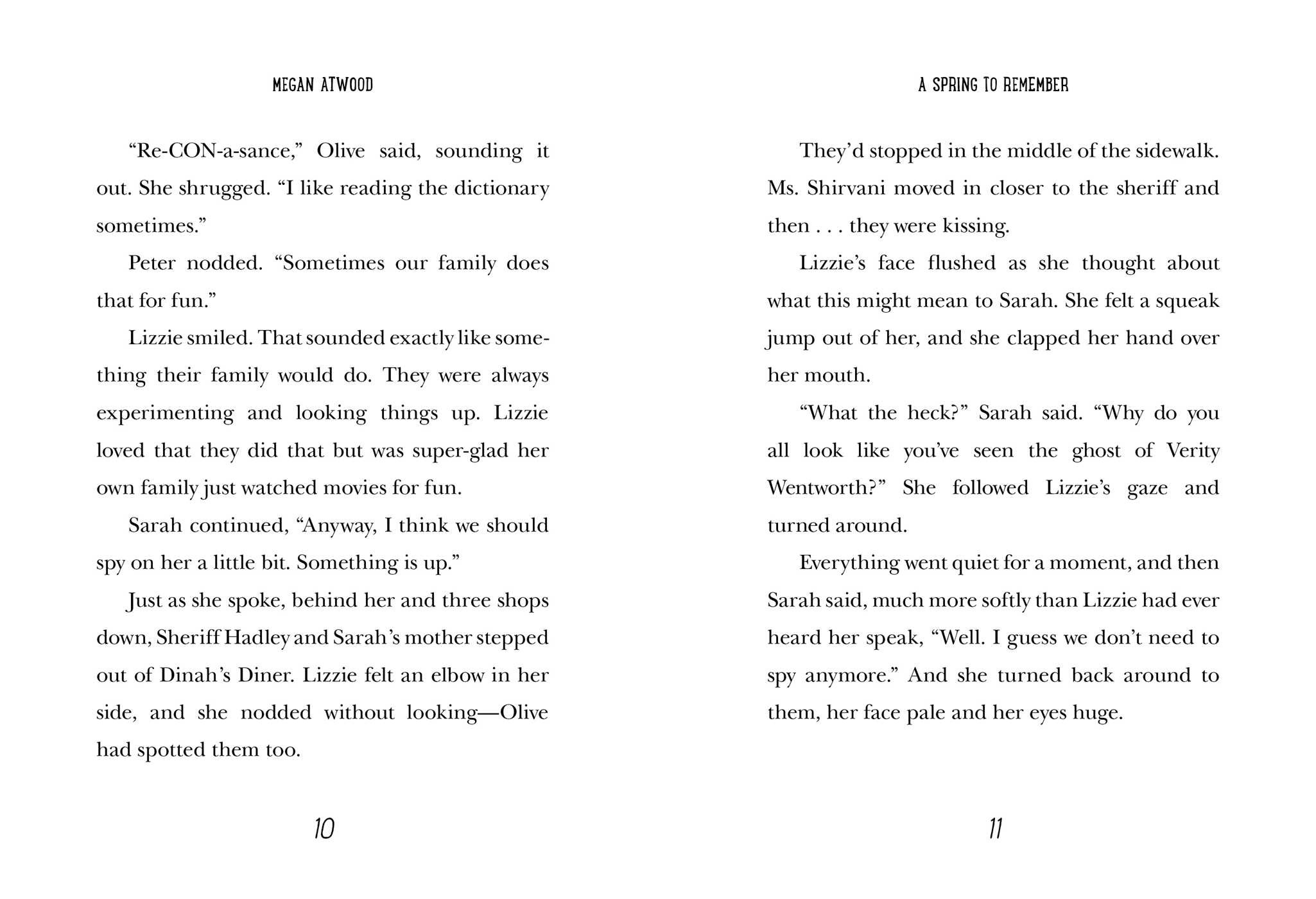 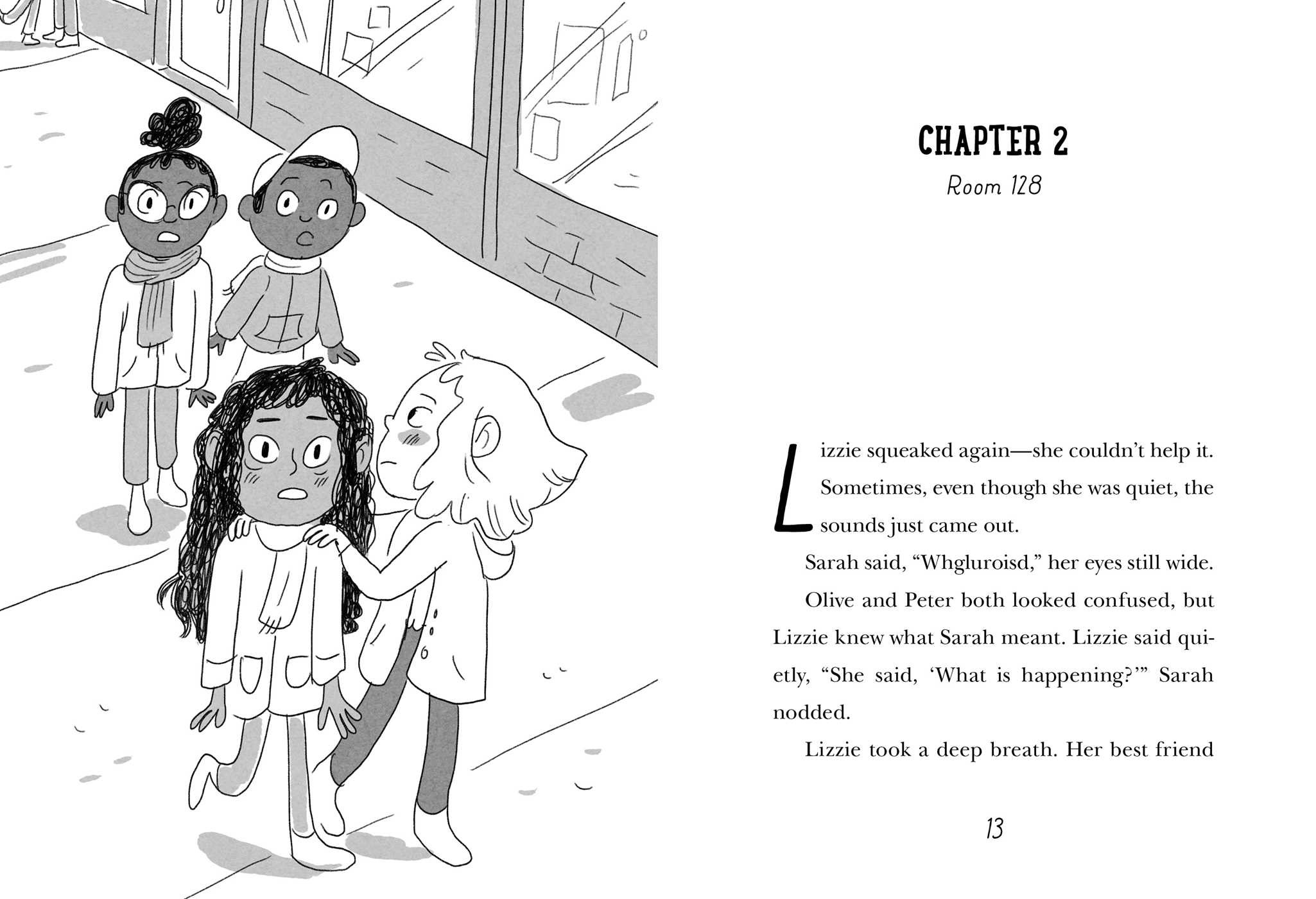 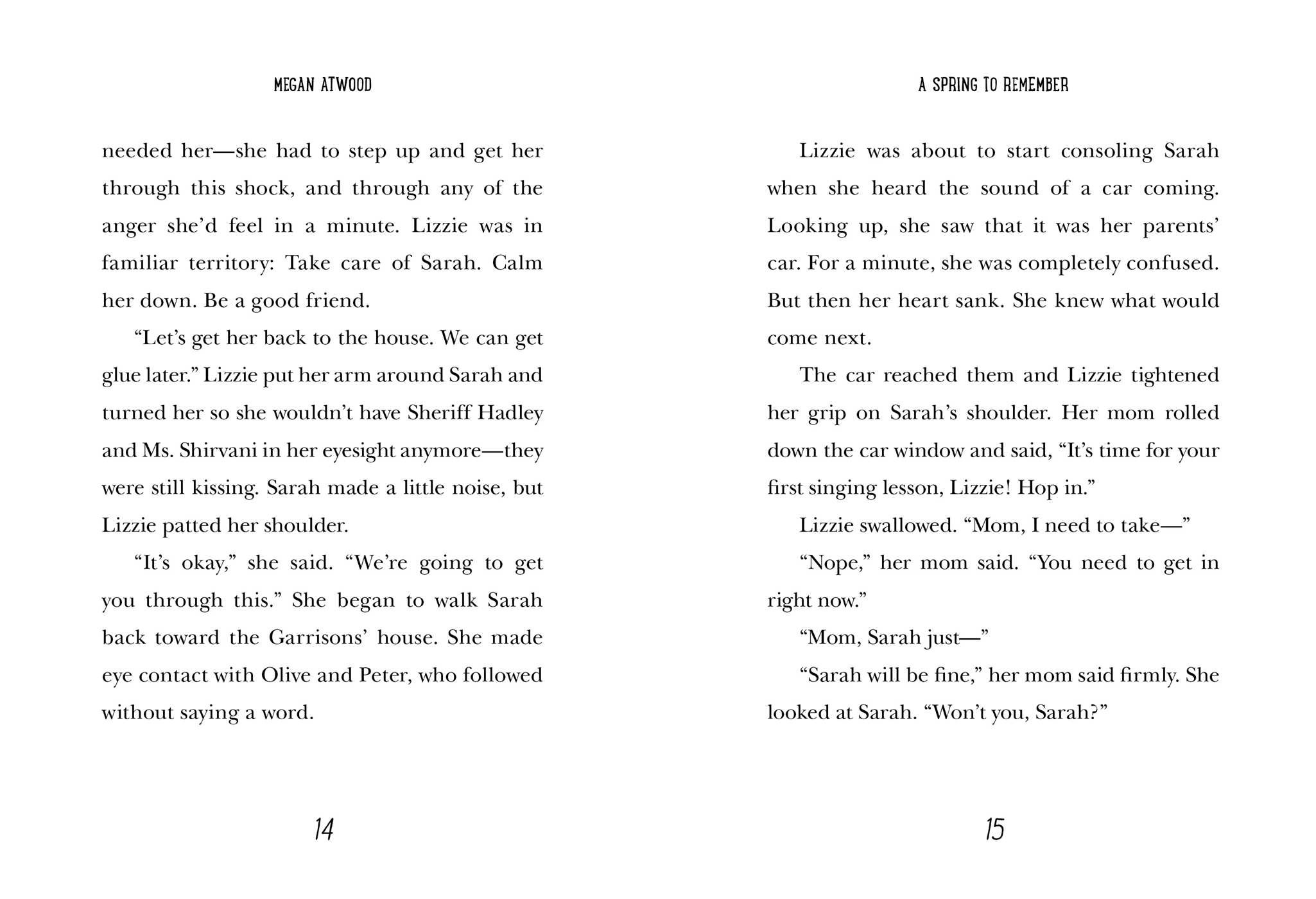 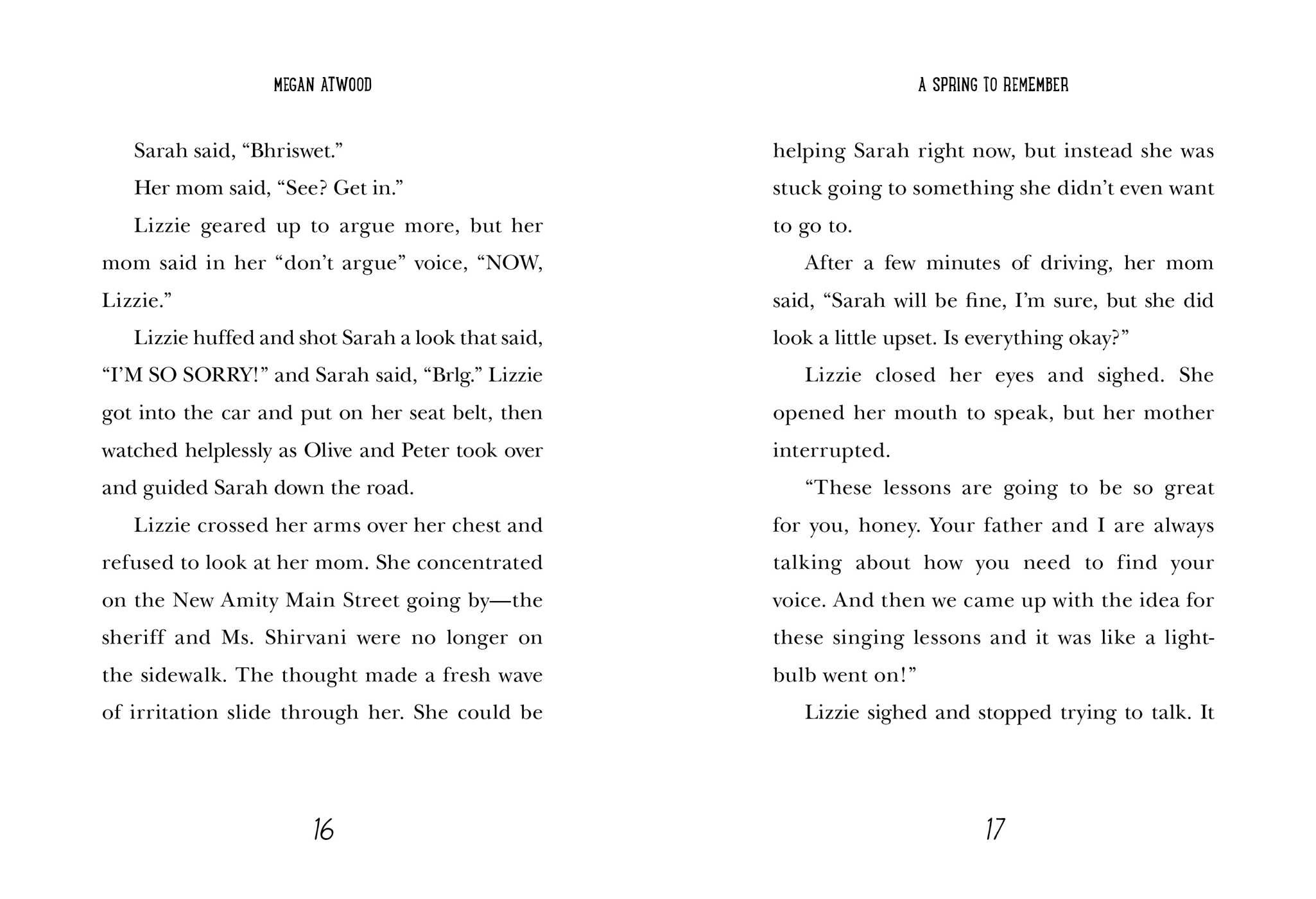 A Spring to Remember

Spring has sprung and the orchard crew tries their hand at matchmaking in this final novel of a sweet series about the bonds of friendship.

The orchard is putting on a Valentine’s Day dance! And the town is once again totally involved. Lizzie and her friends have been tasked with decorations. When all four of them go into town to buy them, they see Sheriff Hadley and Sarah’s mom kissing beside a building! Sarah is shocked. But she’s the only one. Lizzie tries to comfort her but then to her surprise, Sarah is thrilled! She’s so thrilled in fact, she wants to hurry them along. She wants a proposal. And she wants the gang’s help to get it. Lizzie is unsure—she thinks people should be able to do what they want. But Sarah is her best friend, so…

Meanwhile, Lizzie has been taking singing lessons. She hates them—she’s really not that good. But her parents decided she needed to “find her voice” and thought this was a great way to do it. Lizzie doesn’t want to hurt their feelings so she doesn’t say anything.

Sarah gets the gang to scheme ways to hint to Sheriff Hadley and her mom that they all know they’re together and they want them to get married. Now Lizzie’s really uncomfortable. Why doesn’t Sarah just talk to her mom? To make matters worse, her friends come up with an idea of a romantic moment at the Valentine’s Day Dance that involves a proposal and…a singing Lizzie.

Can Lizzie find the courage to put a stop to all this? Or is she going to face her worst nightmare?

A Spring to Remember CHAPTER 1 Right in the Kisser
Lizzie sneezed, sending glitter swirling through the air to land all over her family’s big dining room table. When she opened her eyes, the whole Valentine’s Day Orchard Dance Decoration and Party Crew—or so they’d taken to calling themselves—were staring at her. Granted, it was just her parents and her three best friends in the world looking at her. But having everyone’s attention was not Lizzie’s thing. Her face got hot.

“Sorry,” she said quietly, and rubbed her nose.

Her dad grinned. “I think even your sneezes are sounding more musical!” He nudged his wife, and Lizzie’s mother smiled big.

Lizzie pretended she didn’t hear them. They were talking about the singing lessons they’d made her sign up for—to find her “voice,” they said. Lizzie thought the lessons were a terrible idea and felt just fine keeping quiet.

“The Valentine’s Day Orchard Dance Decoration and Party Crew forgives you!” Sarah, one of her three best friends, said.

Her other best friend Olive said, “You have glitter on your nose, Lizzie,” and pushed her glasses up, getting glitter on her own nose.

Before Lizzie could say anything, Peter—her other other best friend—snorted at Olive, and the two of them shared some look that Lizzie couldn’t understand. They were twins and they were always doing that. But Sarah finished Lizzie’s sentences all the time, so she knew the feeling, at least.

Peter asked Lizzie’s parents, “So, in the fall the Garrison Orchard does a whole fall thing with a pumpkin patch and haunted house—”

Peter shot her a look, and Sarah looked down sheepishly. Peter and Olive had moved fairly recently to New Amity, and Lizzie and Sarah had immediately wanted to be friends with them. Well, Lizzie had. Sarah was a whole different story, but she’d come around. Peter had started off super-shy—almost as shy as Lizzie—but after a bit of a harrowing ordeal, he’d really come out of his shell. And part of that was pushing back at Sarah’s always interrupting. Sarah could be . . . well, Lizzie would call it “enthusiastic.”

Peter went on, “And in the winter, you have the sleigh rides and the whole holiday display and the party and you sell things in the shop. . . .”

Olive said, “Don’t forget the ice cream stand and all the tours and stuff in the summer.” She didn’t even look up when she said it. She was drawing a heart with glue and concentrating hard.

Peter sighed. “I’m getting there, Olive!” Lizzie smiled, and now it was her and Peter’s turn to share a look. As the two quieter ones in the group, they often got talked over. Or “reminded” of things.

“And the ice cream stand and all that in the summer. But in the spring, it’s just the Valentine’s Day Dance? Is there anything else we’ll be doing?” Peter asked.

Lizzie loved that he’d said “we.” Nothing made her happier than sharing the orchard—her home—with the friends she loved. She knew the answer, but she let her parents do the talking.

“You’re asking why we’re only doing a dance on Valentine’s Day and nothing else until summer, when every other season is a huge production? Good question,” Lizzie’s mom said. “And the answer is . . . by this time in the year, we’re pretty tired.” She laughed, and Albert snorted. “And we need just a little break. So we make one BIG event in the spring, or sort of spring. This is kind of our last hurrah until the summer stand and veggies, and the whole town comes to say goodbye until then, basically. Goodbye to the big productions, anyway.”

“And then we sleep for days,” Lizzie’s dad finished, grinning.

“So we have to keep making more decorations. The dance will get here before we know it!” her mom said. “Get on it, people.” She winked at the group. But Lizzie knew she really meant it.

Olive looked up and pushed up her glasses. “I’m out of glue. Does anyone have any more?”

Peter looked around and shrugged.

Sarah said, “I’m glue-less.” Then she looked around, smiling. Lizzie cracked up, putting her hand over her mouth. Peter and Olive laughed and shook their heads. “Get it?” Sarah went on. “Instead of CLUE-less?”

Olive rolled her eyes but smiled. “Yeah, yeah, we got it. No more glue anywhere?”

Lizzie looked around and saw all the glue sticks in the throw-out pile. She looked at her parents. “Should we get more?”

Her mom nodded. “Yeah, would you mind? You four run into town and grab some more. But you have to hurry, Lizzie. You don’t want to be late for your singing lesson!”

Lizzie looked down and didn’t say anything. She absolutely wanted to be late for her singing lesson. Maybe she’d be so late, it would even be canceled.

“ON IT,” Sarah yelled. “We’ll be fast!” The four of them ran to get their coats. In February, New Hampshire was still in the dead of winter. But Lizzie loved how even in the frigid air, you could feel spring just starting to come.

They burst through the door of the Garrisons’ great big house and sprinted down the driveway, Lizzie a few steps behind. When they got to the end of the long driveway, they slowed down and walked past the wooden fences of the orchard toward the main street. Lizzie caught up with her friends just as Sarah was saying something.

“—really weird and I think we need to figure out what’s happening.”

Lizzie said, a little out of breath, “What’s weird?”

Lizzie had to admit Sarah’s mom, Ms. Shirvani, was pretty . . . pretty out there. As the town librarian, Sarah’s mom was probably the smartest person Lizzie had ever met. But sometimes she was a little spacey. But then again, Lizzie had an older sister—Gloria—who yelled the word “ACTING” all the time and walked around in different costumes, so who was she to judge?

“Weird how?” Olive asked, pushing up her glasses.

“Oh, she’s just spending all her time with Sheriff Hadley and she’s really giggly all the time. And even spacier.”

They had reached Main Street, and Sarah turned to face the three of them. “Anyway, I think we should do some . . . what’s that word? Isn’t there a word for spying? I think my mom used it once. Recognize? Regongan?”

Olive said, “Reconnaissance,” and Lizzie turned to her in surprise.

“What is that word?” Lizzie asked. “Recond-a-nance?”

“Re-CON-a-sance,” Olive said, sounding it out. She shrugged. “I like reading the dictionary sometimes.”

Peter nodded. “Sometimes our family does that for fun.”

Lizzie smiled. That sounded exactly like something their family would do. They were always experimenting and looking things up. Lizzie loved that they did that but was super-glad her own family just watched movies for fun.

Sarah continued, “Anyway, I think we should spy on her a little bit. Something is up.”

Just as she spoke, behind her and three shops down, Sheriff Hadley and Sarah’s mother stepped out of Dinah’s Diner. Lizzie felt an elbow in her side, and she nodded without looking—Olive had spotted them too.

They’d stopped in the middle of the sidewalk. Ms. Shirvani moved in closer to the sheriff and then . . . they were kissing.

Lizzie’s face flushed as she thought about what this might mean to Sarah. She felt a squeak jump out of her, and she clapped her hand over her mouth.

“What the heck?” Sarah said. “Why do you all look like you’ve seen the ghost of Verity Wentworth?” She followed Lizzie’s gaze and turned around.

Everything went quiet for a moment, and then Sarah said, much more softly than Lizzie had ever heard her speak, “Well. I guess we don’t need to spy anymore.” And she turned back around to them, her face pale and her eyes huge.

Megan Atwood is a writer, editor, and professor in Minneapolis, Minnesota, whose most recent books include the Dear Molly, Dear Olive series. When she’s not writing books for kids of all ages, she’s making new friends, going on zombie hayrides, and eating as much ice cream as she can. And, always, petting her two adorable cats who “help” her write every book.

A Spring to Remember

More books in this series: An Orchard Novel