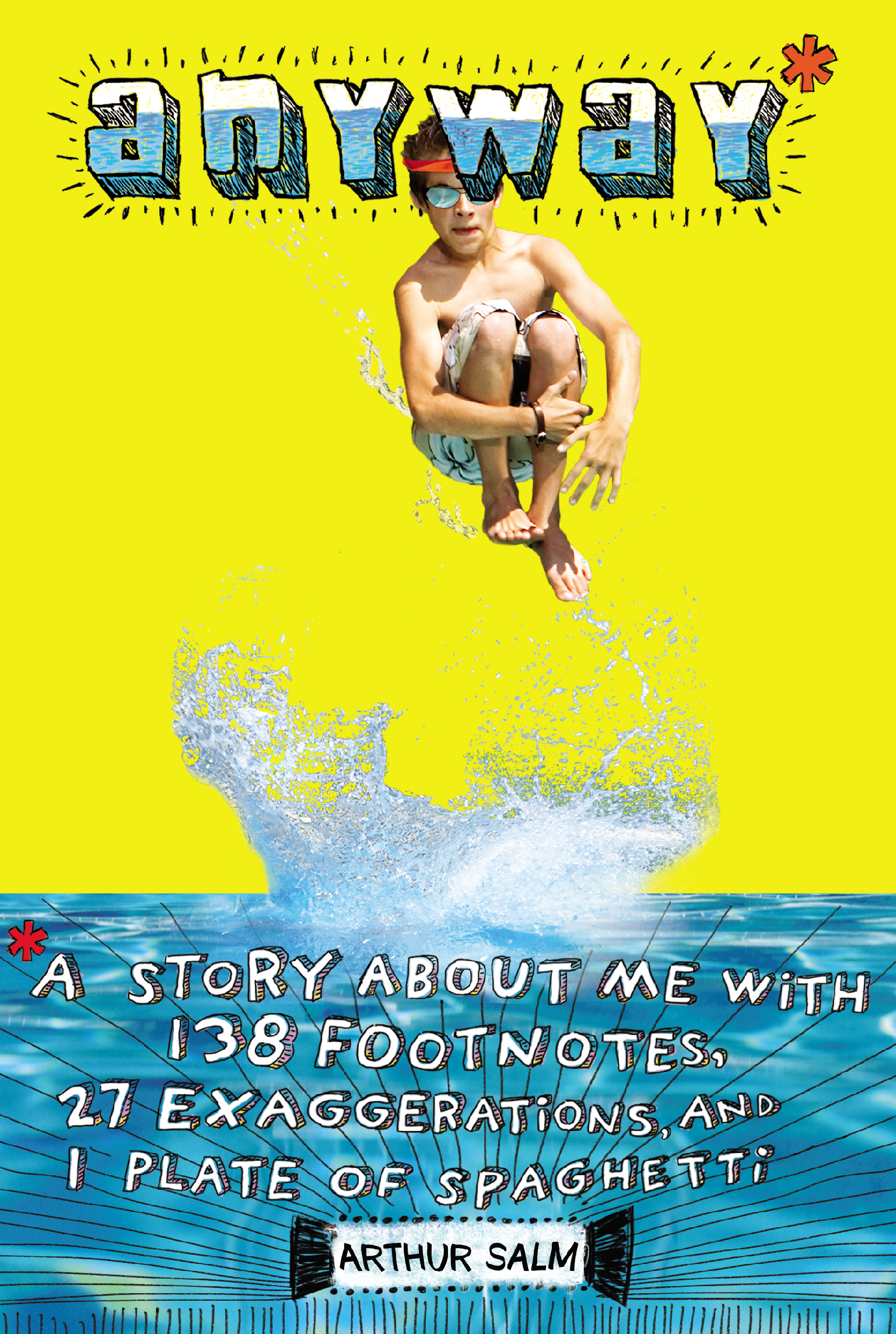 *A Story About Me with 138 Footnotes, 27 Exaggerations, and 1 Plate of Spaghetti

Reinventing yourself takes humor, heart, and a TON of footnotes!

Max is a good kid—but you wouldn’t know that if you met him at the boring family camp his parents dragged him to over the summer. There, for a few exciting weeks, Max reinvents himself as “Mad Max” and gains a bad-boy reputation for being daring, cool, and fearless.

But when Max returns home, he finds it’s easier to be fearless with strangers than it is among friends, and he is not particularly proud of the way his behavior over the summer hurt people. Can he find a way to merge his adventurous alter ego with his true identity as a good guy?

Peppered with humorous handwritten footnotes and doodles throughout, Anyway* perfectly captures the viewpoint of a young teen doing his best to find his place in the world—and an ideal balance between wise guy and wimp.

All right, I’m going to tell you this story, and you tell me if you think it’s funny. I don’t, or at least I didn’t at first. But then, I’m the one who sat on the plate of spaghetti.

Anyway, I’m Max. A good kid. Except for the time I decided I didn’t want to be a good kid anymore. That’s still going on, kind of.

I just have bad luck with spaghetti. One time I made some to surprise my parents, and it was the most horrible stuff I’ve ever tasted in my life. They tried to be polite and eat a little of it, but as they chewed they got these really weird looks on their faces and finally they just spit it into their napkins. My mother said, “Max, what did you do to it? All you have to do is put it in boiling water.” I said, “You mean the water has to boil first?” My father took out his phone and said, “Pizza or Vietnamese?” I said, “Pizza.” They both said, “Vietnamese.” I said, “Okay, but with egg noodles,” and they got those same weird looks on their faces and said together, “No noodles!” So it was a Vietnamese with brown rice night. Not all my stories have happy endings.

Here’s how it started. A few months ago, just before I finished seventh grade, my parents got it into their heads that after school was out for the summer, we had to go to this weeklong family camp in the mountains, just the three of us. They showed me a booklet with pictures of a swimming pool, a gigantic dining hall with a monster fireplace and picnic tables loaded with food, a lake with kayaking and fishing (although my parents made sure not to say the word “fishing” ), volleyball courts—about everything you could think of.

“It says there are lots of youth activities,” my mom said. The camp really didn’t sound too bad, except for the cabin I’d have to share with my parents, and the almost all-day drive to get there. My dad likes to get on the freeway and just go, but my mom is always wanting us to go off on little side trips to see stuff. She says it’ll only take a few minutes.

My brother Ben’s nineteen and in college now, so he gets out of stuff like that.

I’ve been fishing exactly one time in my life, when this YMCA day camp took us deep-sea fishing. We had to get there so early, the sky was still black. I didn’t even know how to bait a hook. A counselor said he’d show me everything, but the boat wasn’t even out of the harbor before I started to get seasick, and I basically barfed for the whole four hours. In the middle of it all, I was sitting on a bench with my head between my knees, trying to figure out if moaning helped or made me feel worse. I was also trying to decide whether I was ready to throw up again. A kid sat down next to me and put his head between his knees too, and I thought, At least I’m not the only one. But what he was doing was getting his sack lunch from under the bench. He unwrapped a baloney sandwich and took a big bite. Then he looked over at me. He was chewing with his mouth open. “You look like you’re gonna barf again,” he said, and he was right.

Car trips are more fun with Alice, but she wouldn’t be coming either.

“Besides,” she says, “we’re on vacation. What’s the hurry?” They can get pretty mad at each other, especially if we’ve been in the car for a long time. I’m always on my dad’s side, because the stuff my mom wants to see is never interesting, and half the time we can’t find it, anyway. And the half the time we do find it, we get lost trying to find our way back to the freeway.

I could tell they’d pretty much made up their minds about the summer camp. And once I found out that we’d be back before Sara Chen’s party, I said sure.

I should tell you that even though it’s fall now and I’ve started eighth grade, I’m still only twelve, because my birthday’s not till November. That means I’m about the youngest one in my class. As you probably know, that sucks. My parents’ friends and my aunts and uncles use the word “tween” a lot. I think they just like saying it, usually right before they tell me how much I’ve grown. As if that was news to me. As if I didn’t measure myself against the bathroom door every four or five days.

My parents were always telling me not to say “sucks,” so I finally stopped saying it around them. That’s something I learned from Alice: If you’re going to break a rule, do it when nobody’s around.

Five feet, inch, as of thirty seconds ago.

“How do you like being a tween?” they ask, and I tell them I don’t know. Then they ask how school is and I say fine, and they ask what grade I’m in and I say eighth, and they say, “Wow! Max is an eighth grader!” And I mean, they all say these same things, word for word.

Anyway, I’d blown it bad when Sara, who’s been a friend of mine since forever, walked up to me right before history class, just a couple of weeks before school was out for the summer, and asked if I wanted to come to her party at the end of July. I said, “So, you’re going to be thirteen, huh?”—even though nobody in the known civilized universe has a girl-boy birthday party after around second grade.

Sara wrinkled her nose and tilted her head and stared at me, like she knew I was an alien but couldn’t figure out which planet I was from. Then she laughed and slugged me in the arm. I acted like it didn’t hurt, which it did because Sara is a pitcher in a girls’ fast-pitch softball league.

Of course, “Oh” wasn’t very cool either, but I was concentrating on getting away from her so that I could rub my arm. So I wasn’t being exactly brilliant. But you have to give me a break, because an awful lot of information had been downloaded into my brain in the last few seconds: 1) the party invitation; 2) pain from my left arm; 3) embarrassment at my stupid answer; and 4) noticing Sara’s long, very shiny, very black hair, which before I’d always just kind of looked at but now I was liking a lot, and suddenly feeling very uncomfortable about her standing so close.

There’s an official book called 178 Stupid Things to Say to Kids that the government hands out to everyone who manages to live to age twenty-one.

There was definitely going to be a bruise, which would require a better explanation than “A girl hit me.” I eventually came up with two: a) “McNaught pushed me into a locker,” which would work because Wiley McNaught hates me, and everybody knows it; and b) just shrugging and saying “I don’t know” real casually, as if getting bruises was no big deal to a guy like me.

You’ve probably picked up on part of my problem already. I start out trying to tell somebody something, like I’m going to tell you about how I sat on the plate of spaghetti, but I get sidetracked because one thought leads me to another and then another. This drives my mom and dad crazy. They’ll pester me to tell them something about my day at school, for example. Then, when I do, I end up talking about stuff that, I admit, doesn’t have much to do with what I started out talking about. I can see them getting impatient. My mom gets this really fakey smile. My dad will start glancing down at the newspaper he’s holding. Finally one of them will say, “Max, can you just get to the point?”

It wasn’t my fault. You’ll see.

I just realized that her fakey smile looks exactly like the fakey smile I have in all my school pictures.

Anyway, it was going to be a long drive to the camp. As I was helping my dad put our stuff in the car, I started wondering about the kids who’d be there—how I’d get along with them, if any of them would turn out to be good friends, things like that.

Then I got this idea. Nobody at the camp will know me, or know anything about me. Why do I have to act like I always act? Why do I have to be me? Max, the good boy. Max, the guy nobody pays much attention to. I mean, why can’t I go up there and make myself into a completely different person?

My dad slammed the trunk closed just as my mom walked out the front door and said, “Okay, let’s go!” That meant it was time for my dad and me to go back into the house and sit down on the couch. My mom walked back in and said, “What’s wrong?” Then she said, “Well, I may as well hit the bathroom before we go.” And off she went.

I end up having to say “Anyway” a lot.

He already knew exactly how it would all fit in the trunk. He says he lies in bed the night before a trip and works it out in his head like a giant puzzle. The one time I tried it, I found out that a lot of things aren’t the size I thought they were.

He looked at his watch and said, “Go!”

We waited. She came out of the bathroom. He looked at his watch again, and said, “We’re up to five.”

My mom walked to the front door again. “Are we going or not? Come on!”

We almost made it to the car, but my mom turned around. “Did you lock the back door?”

“Yeah, yeah. Let’s go!” He could see his victory slipping away.

“I’ll just check. That way I won’t worry about it.” And back into the house she went.

I elbowed my father. “Time?”

We stood there leaning against the car. 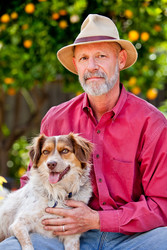 *A Story About Me with 138 Footnotes, 27 Exaggerations, and 1 Plate of Spaghetti