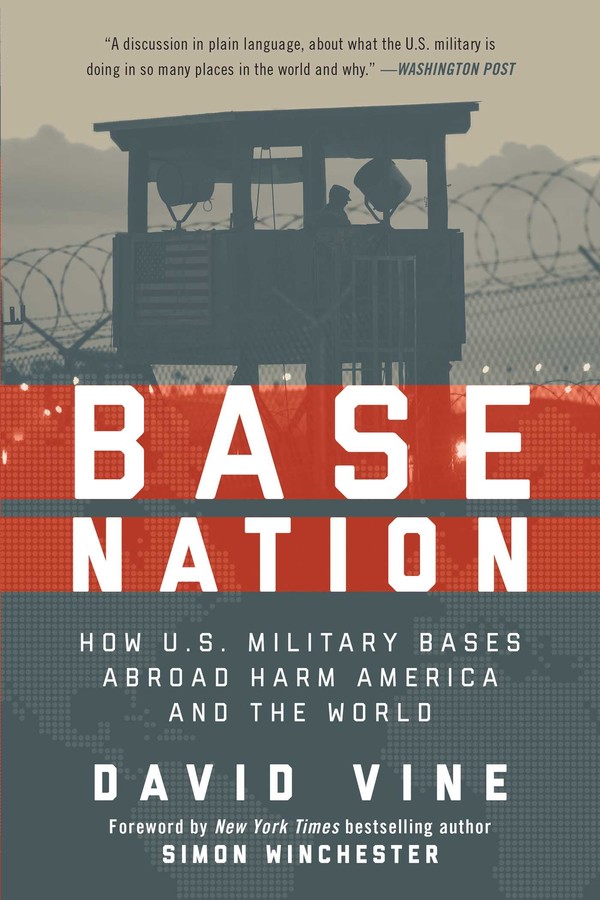 How U.S. Military Bases Abroad Harm America and the World

By Vine, David
Foreword by Simon Winchester
PRICE MAY VARY BY RETAILER

American military bases encircle the globe. More than two decades after the end of the Cold War, the United States still stations its troops at nearly a thousand locations in foreign lands. These bases are usually taken for granted or overlooked entirely, a little-noticed part of the Pentagon’s vast operations. But in an eye-opening account, Base Nation shows that the worldwide network of bases brings with it a panoply of ills and actually makes the nation less safe in the long run.
As David Vine demonstrates, the overseas bases raise geopolitical tensions and provoke widespread antipathy towards the United States. They also undermine American democratic ideals, pushing the United States into partnerships with dictators and perpetuating a system of second-class citizenship in territories such as Guam. They breed sexual violence, destroy the environment, and damage local economies. And their financial cost is staggering: though the Pentagon underplays the numbers, Vine’s accounting proves that the bill approaches $100 billion per year. For many decades, the need for overseas bases has been a quasi-religious dictum of U.S. foreign policy. But in recent years, a bipartisan coalition has finally started to question this conventional wisdom. With the United States withdrawing from Afghanistan and ending thirteen years of war, there is no better time to re-examine the tenets of our military strategy. Base Nation is an essential contribution to that debate.

“Who knew that we have more than eight hundred bases around the world? And what do our troops do there when they’re not busy intruding into other people's conflicts? Such questions lie at the heart of David Vine's remarkable, impeccably written, and clearheaded analysis of the costly madness that is America’s current colonial-military complex. His book is a marvel, and all in power should read it.”
—Simon Winchester, author of The Men Who United the States and The Professor and the Madman
“A useful call to examine a question that gets far less attention than it merits. . . . An entreaty for an explanation, a discussion in plain language, about what the U.S. military is doing in so many places in the world and why.”
—The Washington Post
“U.S. national security policy rests on the assertion that ‘forward presence’ contributes directly to global peace and security. In this powerful book, David Vine examines, dismantles, and disproves that claim. He demonstrates that America's sprawling network of overseas bases imposes costs—not only financial but also political, environmental, and moral—that far exceed what the Pentagon is prepared to acknowledge. Base Nation offers a devastating critique, and no doubt Washington will try to ignore it. Citizens should refuse to let that happen.”
—Andrew J. Bacevich, author of Limits of Power and Breach of Trust
“Just looking at the maps in David Vine’s thoroughly documented Base Nation will give you the chills—and seduce you into reading the book. He's performed a kind of modern day treasure hunt, finding and displaying our military forces all over the globe, and then thinking deeply about whether their far-flung presence will achieve or undermine the goal of fostering a peaceful and prosperous world.”
—Dana Priest, coauthor of Top Secret America
“While I may not share all of David Vine’s conclusions, Base Nation amply demonstrates what a growing number of people across the political spectrum are concluding: the foundation of our military belongs right here on American soil. In the U.S. Senate, I pushed for greater investment in our bases here at home where our forces have greater unrestricted training opportunities and can rapidly deploy worldwide better prepared for combat. Pentagon officials and members of Congress should pay close attention to Vine’s arguments in favor of reducing our foreign presence in the interest of strengthening the future security posture of U.S. military forces and the fiscal health of our nation.”
—Kay Bailey Hutchison, former U.S. senator (R-TX) and chair of the Senate Appropriations Subcommittee for Military Construction

How U.S. Military Bases Abroad Harm America and the World

By Vine, David
Foreword by Simon Winchester
PRICE MAY VARY BY RETAILER