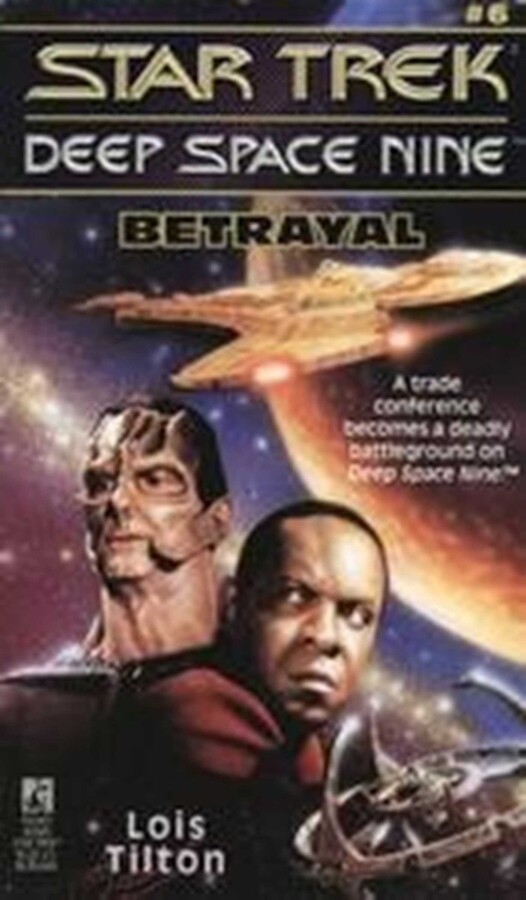 Ambassadors from all over the Federation have assembled on Deep Space NineTM for a conference that will determine the future of the planet Bajor. Keeping dozens of ambassadors happy is hard enough, but soon terrorists begin a bombing campaign on the station, and Commander Sisko's job becomes nearly impossible. Distracted by all of this, he's in no position to deal well with the arrival of a belligerent Cardassian commander demanding the return of Deep Space Nine to the Cardassian empire, but he must rise to the occasion if his station and Bajor are to emerge from the crisis intact.

"But I don't get it," Jake protested. "The Cardassians are gone now. The Bajorans won! They got their world back. So why are they still fighting and blowing things up?"
"That's what I'm trying to explain. Strange things can happen to people when they've spent their whollives fighting for a cause. Think about it: Now that you've won, who gets to pick up the pieces? Who gets to put them back together again? Who gets which share of what little there is left?
"They have peace now, but they can't quite remember what peace used to be like. Some of them have forgotten any other way of resolving a dispute. Violence can turn into a way of life. And, besides, only a minority of the Bajorans are involved in all this factional infighting. But the entire world suffers from their reputation. Too many people think all Bajorans are terrorists."
"So I guess the Kovassii wouldn't want Major Kira to meet them at the airlock, huh?"
Sisko tried to suppress his grin, but he knew that Jake's remark was only the truth. Major Kira Nerys, his first officer, was a Bajoran, not a Federation officer. Deep Space Nine was officially a Bajoran station, although it was under Federation administration, and the joint command reflected that complicated fact.
It was also true that Kira, before she had put on the uniform of an officer in the service of the provisional Bajoran government, had been an active member of the Shakaar resistance group, which was for all intents and purposes a terrorist organization dedicated to driving out the Cardassian occupiers by any means possible. No, the touchy Kovassii ambassadors certainly would not be pleased to discover that Major Kira was personally escorting them onto the station.
"The point is, Jake, this station is the one place that belongs to all the Bajorans, not just some group or order or faction. When the delegates come here, they're meeting at the nearest thing to a neutral zone in all Bajoran space. And what keeps it that way is the presence of the Federation. Our presence. If Starfleet were to abandon Deep Space Nine, the Bajorans might blow it apart fighting over which faction would assume control."
"Or the Cardassians would move in and take it over to get hold of the wormhole to the Gamma Quadrant," Jake added knowledgeably.
"Or the Cardassians would take it over, right. And what keeps them from doing that now? You know the station doesn't have the weapons to defend itself against Cardassian warship. But because we're here, the entire Federation is here, behind us.
"And that," he concluded, "is why I have to wear this damnable uniform and go to that airlock to bow and shake hands with the Kovassii delegation. Because I'm the official Federation representative and that's my job."
"Uh, Dad?"
"What?"
"Why the gloves?"
Sisko stared at the gloves. "Oh, right." As he started to pull them onto his bands he said, "It's a protocolthing with the Kovassii. They think displaying bare hands is offensive, for some reason." Flexing his fingers, he went out into the other room, about to leave, when he noticed the sputtering lights of the Cardassian-built food replicator.
"What's the matter with that thing now?" he muttered, coming closer and hitting the Reset control.
"No, wait! That's what I was going to tell you, the replicator's -- "
But it was too late. A foaming pinkish blob materialized on the tray, spattering Sisko's gleaming white gloves.
" -- fritzed again," Jake concluded unnecessarily.
Sisko took a deep breath but controlled his language in the presence of his son.
Just then his communicator beeped. "Commander? The Kovassii ship is expected to dock in ten minutes."
Sisko exhaled forcefully. "Be right there," he informed Ops. Then, to Jake, "Clean up that mess, would you? And I don't want you hanging around the Promenade with Nog, either. You have your n-space topography problems to finish, if I'm not mistaken."
"Yes, sir," said Jake unhappily as his father left their quarters.
Left alone, he brooded on his injustices. The replicator was broken again, so there wasn't anything to eat. This stupid station was full of Cardassian junk, and none of it ever worked right. And those topography problems were hard. He'd been going to ask Dad to help him with them, but Dad was never around long enough. He was, always in a hurry. There was always some stupid emergency.
And now no trip in the runabout. It wasn't fair.
I should have known I wouldn't get to go, he thought. Nothing good ever happens around this place.
But at least on the Promenade, there was usually some excitement. And kiosks where he could get something to eat. And if he was lucky, if he hurried, he might even run into Nog.