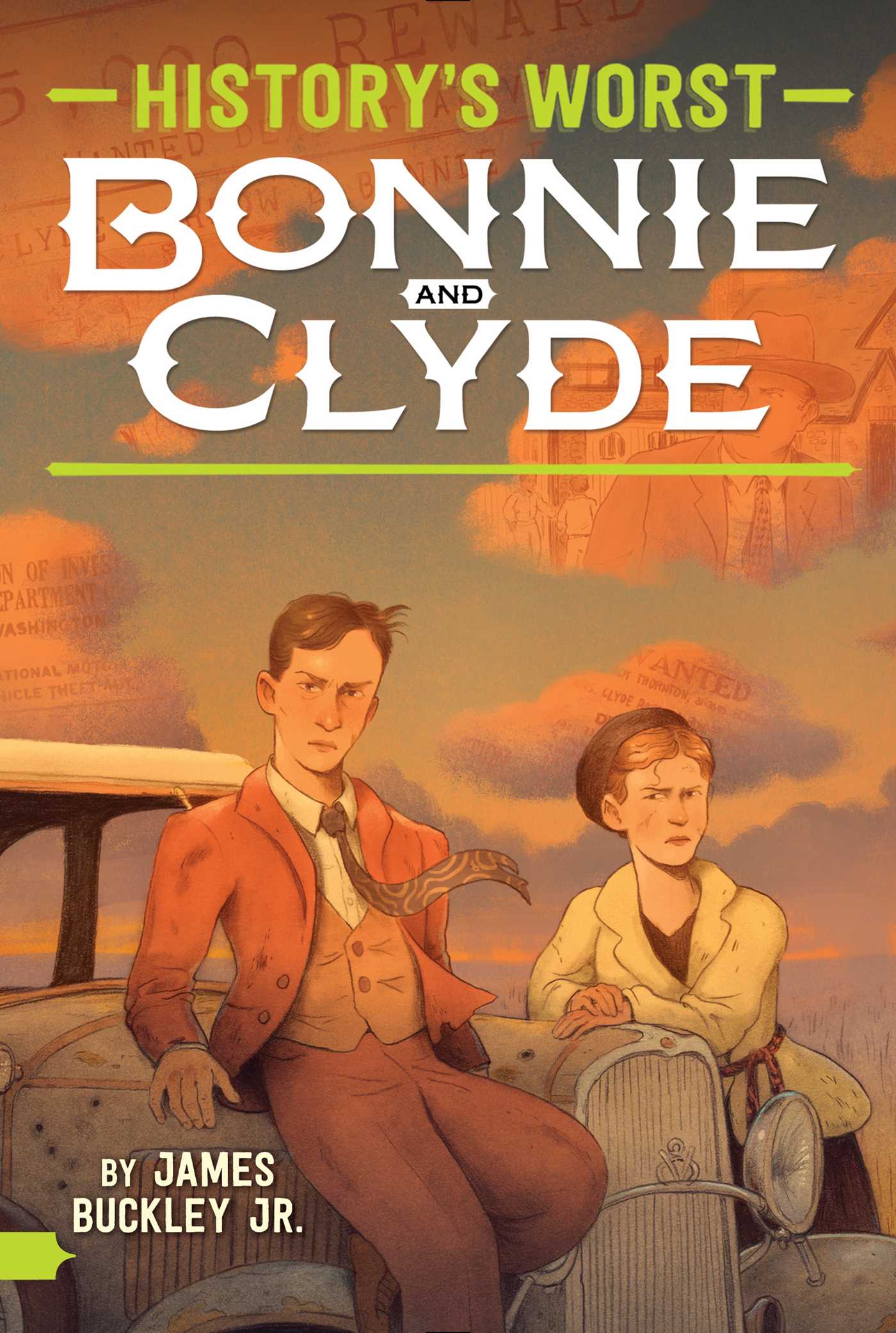 Get a behind-the-scenes glimpse of what it takes to be considered two of the worst figures in history, with the third book in this nonfiction series that focuses on the most despicable historical figures.

Bonnie Parker and Clyde Barrow are possibly the most famous and most romanticized criminals in American history. When the police found photos of them posing with guns and goofing around, they became media darlings. However, their fame was short-lived, and their lives would end in a violent police ambush.

Because the reality was very different. During their 1930s crime spree, the two young Texans and the rest of their gang lived a vicious life filled with narrow escapes, bungled robberies, injuries, and murders. And they weren’t the only gangsters operating at the time. Criminals like Al Capone, Charles “Pretty Boy” Floyd, and “Ma” Barker grabbed their own share of headlines, but in the end it was Bonnie and Clyde who really captured the public’s imagination. A lot of that was because of Bonnie herself. The cute, blonde criminal was unique at the time.

There is no question that their story continues to fascinate writers, musicians, visual artists, and filmmakers. But is that fascination justified? Or are we confusing the movie images with reality and ignoring the ugly truth of their story?

Bonnie and Clyde 1 BUD
This story starts in Texas. Now, that’s a big place, so to narrow it down, take a drive south along a road from the big city of Dallas to a tiny little bit of nothing called Telico. It’s very small now and was even smaller then, just around the turn of the twentieth century.

Henry and Cumie Barrow, a young couple in love, had married in 1890 and decided to take up farming, as so many did in the wide-open spaces there. In their first years they began to raise crops such as cotton and corn. When the farm did not produce, Mr. Henry Barrow hired himself out to work on other folks’ farms. His wife, Cumie, sixteen when they married, ran the house, which, in the way of things back then, was soon filled with kids.

Cumie was just nineteen and married three years when the couple’s first child, Elvin, came along in 1894. In the decade that followed, the Barrows had two more sons and a daughter.

It was a hard life, but manageable for the most part.

One of the stars of this story, Clyde Barrow, came along on March 24, 1910. At least that’s what it said in the Barrow family Bible, which to a Texas family was more official and reputable than anything from a government office. There were no doctors around to fill in any paperwork—a midwife was on hand, but that was about it. Most reports say he was born in 1909, but later researchers have never been able to turn up anything official for either date. (The FBI added their own bit of myth, calling him Clyde Champion Barrow on its Wanted posters. Clyde’s family, including sister Nell, said his middle name was Chestnut.)1

Two more kids followed in the now very crowded Barrow household. Among the five Barrow siblings, the second-most notable was Ivan, known by one and all as Buck. Clyde got a nickname of his own: Bud. Together, Buck and Bud would become partners in crime and constant companions.

By the time of Clyde’s arrival, the Barrow family all lived in a three-room house (most histories call it a “shack”?2). There was no running water and no electricity. This was not unusual, even in the early 1900s. Electricity didn’t really arrive in most rural areas for decades. The bright lights of the big city of Dallas, however, shone in the far distance, both literally and figuratively.

The children were not at all interested in becoming farmers like their parents. But Cumie worked hard to make them go to school and to do chores around the farm. With such a large group of siblings (the seventh and last Barrow child, Marie, was born when Clyde was almost eight), finding people to play with was no problem. Nearby farm families provided other playmates for the young Barrows.

Cumie also was a devout Christian. She believed that one should do everything that Jesus and the Bible and her church said to do. And when the kids didn’t do what either Jesus or Cumie said, she was ready with a switch. She aimed at their legs most often.

The children also spent chunks of time visiting or even living with their uncle, Frank Barrow, Henry’s brother. He lived on a larger farm in Corsicana, Texas.

A DOUBLE HIT TO FARMERS

The early 1920s were very difficult for farmers in Texas and across the Midwest.

The first reason was economic. World War I had ended in late 1918. During the war, prices for most farm crops such as wheat, corn, or cotton had risen dramatically. The government was buying a lot and that kept prices high. Farmers were doing well generally. However, once the war ended, those prices fell quickly. By 1920 and 1921 many farmers were struggling to make ends meet.

In Texas in particular, another reason was environmental. A beetle called the boll weevil had infested the cotton crop there. It destroyed acres and acres of farms, ruining some farmers. The effects of the weevil spread throughout towns that depended on cotton, and many families were left in poverty.

The Barrow family’s farming fortunes would soon turn, too, in part for these reasons.

Clyde had it pretty good in Telico, for all its shortcomings. He had friends and plenty to do. He went to school but never did that well, nor did he seem to care much one way or the other. Buck, Clyde’s older brother, stopped going to school when he was about eight. Like their father, he never really did learn to read or write.

Clyde had work to do on the farm, but it left him time for fun, such as riding the calves or playing cowboys and Indians.

He didn’t seem particularly aimed for a criminal life. A story told by his sister Marie years later was a rare example. It seems that the candy store owner caught Clyde trying to walk out with a handful of sweets. To prevent the youngster from eating any evidence of future crimes, the owner “made Clyde whistle every time he came into the store.”?3 It was hard to whistle with a mouth full of swiped candy.

His sister Nell reported that her older brother once almost drowned in a river. “He was perfectly limp by the time we got him on the bank,” she wrote.?4 But he revived and together they promised to hide the incident from their parents, so they would not forbid them further swimming adventures.

But those were rare dramatic incidents in a seemingly quiet life.

By the time Clyde was about thirteen, most of his older siblings had moved up and out to Dallas to make their way in the world. Due to falling crop prices and the increasing lack of family help, the Barrows found that running the farm was becoming harder and harder. Henry had found part-time work in a brickyard, but it was not enough. They made the hard decision to move. Henry and Cumie upped stakes with their three youngest kids and left their small farm. Next stop: the big city, or at least near enough to one.

James Buckley Jr. is a prolific author of nonfiction for young readers. Bonnie and Clyde joins a long list of his biographies that cover Adolf Hitley, Milton Hershey, Betsy Ross, Jesse Owens, Muhammad Ali, and Roberto Clemente, among many others. Other recent books include titles on the International Space Station, the Moon, snakes, insects, firefighters, history, and sports of various kinds. That latter subject is a big part of his work, following on a career in sports journalism with Sports Illustrated and the National Football League. He is the owner of Shoreline Publishing Group, a book packager based in his home of Santa Barbara, California, where he lives with his wife and two teenagers.