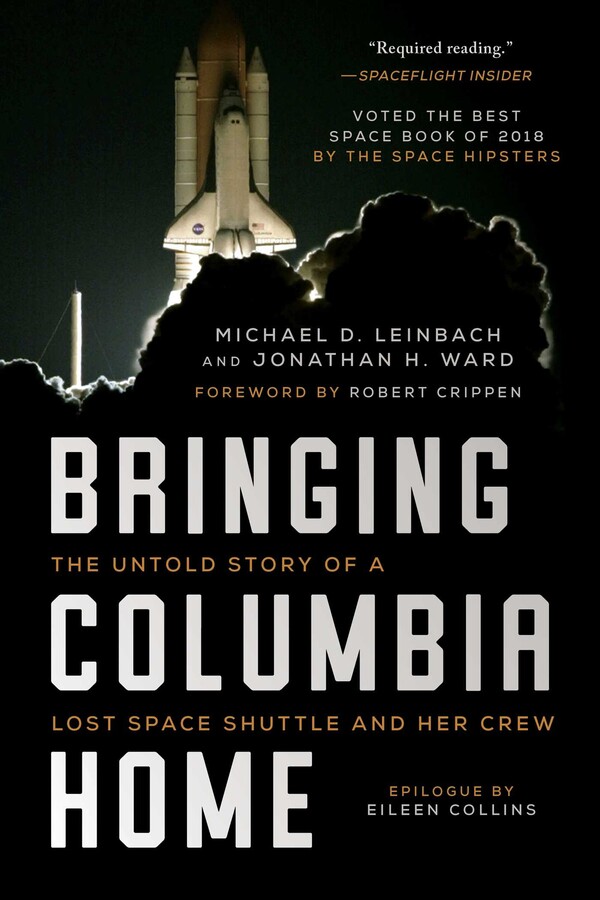 The Untold Story of a Lost Space Shuttle and Her Crew

Voted the Best Space Book of 2018 by the Space Hipsters

The dramatic inside story of the epic search and recovery operation after the Columbia space shuttle disaster.

On February 1, 2003, Columbia disintegrated on reentry before the nation’s eyes, and all seven astronauts aboard were lost. Author Mike Leinbach, Launch Director of the space shuttle program at NASA’s John F. Kennedy Space Center was a key leader in the search and recovery effort as NASA, FEMA, the FBI, the US Forest Service, and dozens more federal, state, and local agencies combed an area of rural east Texas the size of Rhode Island for every piece of the shuttle and her crew they could find. Assisted by hundreds of volunteers, it would become the largest ground search operation in US history. This comprehensive account is told in four parts:

For the first time, here is the definitive inside story of the Columbia disaster and recovery and the inspiring message it ultimately holds. In the aftermath of tragedy, people and communities came together to help bring home the remains of the crew and nearly 40 percent of shuttle, an effort that was instrumental in piecing together what happened so the shuttle program could return to flight and complete the International Space Station. Bringing Columbia Home shares the deeply personal stories that emerged as NASA employees looked for lost colleagues and searchers overcame immense physical, logistical, and emotional challenges and worked together to accomplish the impossible.

Featuring a foreword and epilogue by astronauts Robert Crippen and Eileen Collins, and dedicated to the astronauts and recovery search persons who lost their lives, this is an incredible, compelling narrative about the best of humanity in the darkest of times and about how a failure at the pinnacle of human achievement became a story of cooperation and hope.

Michael D. Leinbach was the last launch director in the space shuttle program at NASA's John F. Kennedy Space Center, responsible for overall shuttle launch countdown activities until the end of the program in 2011. In November 2004, Leinbach was awarded the prestigious 2004 Presidential Rank Award. He lives in Scottsmoor, Florida.

Jonathan H. Ward works to bring the thrill of the space program to life for the general public as a Solar System Ambassador for the Jet Propulsion Laboratory and as a frequent speaker on space exploration topics to interest groups and at regional conferences. He is the author of two previous books on space exploration. He lives in Greensboro, North Carolina.

Voted the Best Space Book of 2018 by the Space Hipsters

"In Bringing Columbia Home, Mike Leinbach and Jonathan Ward have vividly captured the intensity of those very difficult days. They tell the story with compassion but without pulling any punches. The book also reminded me of the spirit of the American people who selflessly worked together to help NASA in its hour of greatest need. It’s a message we all need to remember these days.—Scott Kelly

“A gripping account of a fatal tragedy and the impressive and deeply emotional human response that ensued.”—Kirkus Reviews, *starred review*

“Gripping and dramatic . . . It’s an important and fascinating chapter in space history, and it finally gets the full treatment it deserves. As told by someone who was involved in the effort from the beginning, it’s also a deeply personal and moving story.”—Booklist

“Fast-paced and affecting . . . It is a moving and sometimes uncomfortably close account. . . . The unadorned, multisensory narration richly depicts the emotions and everyday acts of heroism of all involved.”—Publishers Weekly

“A grimly captivating new history of the loss of the space shuttle Columbia. . . . Leinbach and Ward set their account apart from other 'Columbia' books by following the story from its central tragedy to its almost unthinkably sad immediate aftermath. . . . Despite the dramatic tragedy at the beginning of the book, it's the quiet stories of perseverance and camaraderie [in the recovery effort] that will linger longest with the reader.”—Christian Science Monitor

“How glowing is our praise of this book? It simply cannot be higher. This book needs to be required reading in high schools and colleges across the United States.”—Spaceflight Insider

“Bringing Columbia Home explains a disaster in the Texas skies—and how thousands on the ground helped. . . . [It] shines brightest in telling the story of the search-and-recovery effort.”—Dallas News

"Bringing Columbia Home is a compelling, personal story about the Columbia accident and the efforts to recover—both the debris from the shuttle, and from the accident itself. It’s a reminder that, as we look at the big-picture policy perspective of human spaceflight, it’s also a very personal matter for those who put their lives on the line to fly, and those who support them."—Space Review

“The book Bringing Columbia Home presents vivid details of the preparation and the aftermath of that fateful day when Columbia exploded. I am so grateful that the heartwarming story of the people of East Texas rallying to help the grim search has been brought forth by Michael Leinbach and Jonathan Ward. It is a remarkable account of what a team of professionals with an untrained but willing army of volunteers could achieve.”—The Honorable Kay Bailey Hutchison, Senator for Texas, 1993-2013

“Mike and Jonathan have done a brilliant job capturing the depth of emotion and human engagement of what has been covered by others only as a technical investigative treatment. In doing so, they have made the story very personal for the thousands of people who invested themselves in this critical chapter of space exploration history. This is a valuable contribution about a defining moment that demonstrates NASA's resolve and the selfless generosity of the American spirit.”—Sean O'Keefe, former administrator of NASA

“Mike and Jonathan have written an important book about the greatness of the United States and the American people in responding to a national tragedy. This book brought back many memories—and some tears—as I recalled the selfless cooperation of countless agencies and the outpouring of support and prayers from the nation’s citizens, all aimed at getting NASA and the Space Shuttle flying again.”—Jerry L. Ross, former astronaut, retired USAF Colonel, and author of Spacewalker: My Journey in Space and Faith as NASA's Record-Setting Frequent Flyer

“Spaceflight is an inherently risky business. I had more than my share of close calls in my career. But the Apollo 1 fire and the Challenger and Columbia accidents were grim reminders that we sometimes have to pay a very dear price in the cause for human advancement. In Bringing Columbia Home, Mike Leinbach and Jonathan Ward tell the remarkable story of what NASA and the American people did supremely well after a crisis: supported each other through difficult times, tirelessly looked for solutions, and then moved forward to accomplish bold goals. This engaging and inspiring book reminds us of what Americans look like at their best—cooperative, compassionate, and committed.”—James Lovell, former astronaut and coauthor of Apollo 13

“I was privileged to call Columbia my home in space for eighteen days. Thanks to this moving and heartfelt story, now I know how many thousands gave their all to bring this storied ship and her crew to an honored rest.”—Tom Jones, former astronaut and author of Ask the Astronaut and Sky Walking: An Astronaut's Memoir

“Bringing Columbia Home is about tragedy and how tragedy is overcome. Leinbach and Ward have written an intensely compelling book with life lessons for everyone in the space community and ordinary life. It is an intensely human and technological drama.”—Hugh Harris, former director of public affairs, NASA Kennedy Space Center

“Bringing Columbia Home is a wonderful contribution to spaceflight history, a previously untold story of heroism related responsibly, compassionately, and accurately. The depiction of the entire NASA family's participation in the recovery and investigation is touching and respectful. People are going to love this book.”—Susan Roy, author of Bomboozled: How the US Government Misled Itself and Its People into Believing They Could Survive a Nuclear Attack

The Untold Story of a Lost Space Shuttle and Her Crew