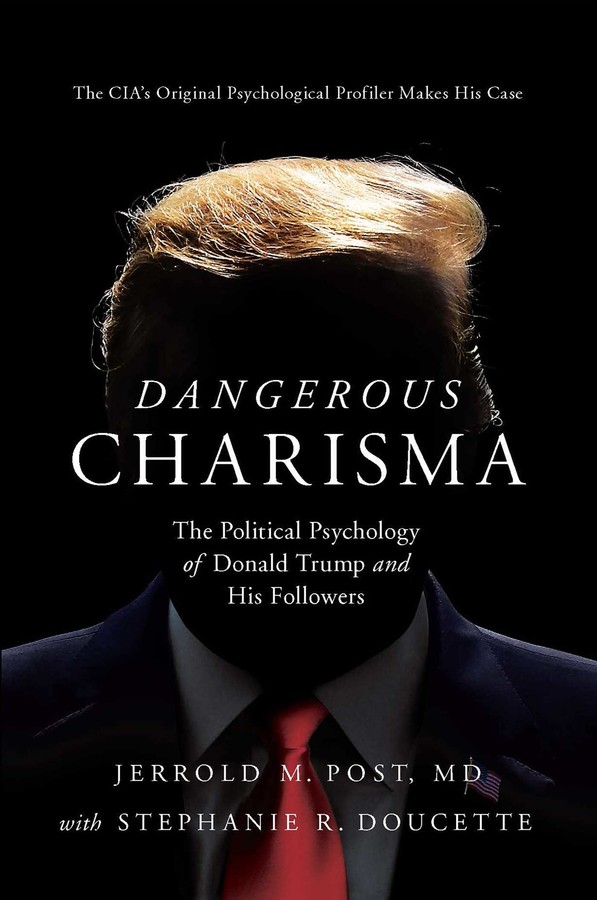 The Political Psychology of Donald Trump and His Followers

By Jerrold Post and Stephanie Doucette
PRICE MAY VARY BY RETAILER

The long-time head of psychological profiling at the CIA puts President Trump under the psychiatric microscope, examining the unique connection between Trump and his base.

Offering an in-depth psychological and political portrait of what makes Donald Trump tick, Dangerous Charisma combines psychoanalysis with an investigation into the personality of the current American president. This narrative not only examines the life and psychology of Donald Trump, but will also provide an analysis of the charismatic psychological tie between Trump and his supporters.

While there are many books on Donald Trump, there has been no rigorous psychological portrait by a psychiatrist who specializes in political personality profiling. As the founding director of the CIA’s Center for the Analysis of Personality and Political Behavior, Dr. Post has created profiles of world leaders for the use of American presidents during historic events. As once stated by Jane Mayer of the New Yorker, who characterized Dr. Post as “a pioneer in the field of political personality profiling,” “he may be the only psychiatrist who has specialized in the self-esteem problems of both Osama bin Laden and Saddam Hussein.”

In this new book, the psychiatrist who once served under five American presidents applies his expertise to profiling the current resident in the White House, with surprising and revelatory results.

Jerrold M. Post, M.D., is considered the founding father of political personality profiling, having served a 21-year career with the CIA as the founding director of the Center for the Analysis of Personality and Political Behavior. Following his CIA career, he became Professor of Psychiatry, Political Psychology and International Affairs at George Washington University. He is a magna cum laude graduate of Yale College and received his M.D. from the Yale University School of Medicine. He received postgraduate training in psychiatry from Harvard Medical School and the National Institute of Mental Health. Dr. Post is the author of fourteen books in the field of political psychology, most recently Narcissism and Politics: Dreams of Glory from Cambridge University Press. Over the course of his career, Dr. Post has been interviewed on CNN, ABC, NBC, FoxNews, MSNBC, CNBC, and has made frequent appearances on CBS's Hardball with Chris Matthews and CNN's The Situation Room with Wolf Blitzer, as well as ABC's Nightline, CBS's Face the Nation, and ABC's Good Morning America.

Stephanie Doucette is the Director of Research at Political Psychology Associates, Ltd. She has conducted research on the psychology of political leaders and on the changing psychological face of terrorism in collaboration with Dr. Post, and has co-authored scholarly work with Dr. Post on the subject published by the Oxford University Press and elsewhere. Ms. Doucette earned her B.A. in international affairs, with a minor in psychology, at The George Washington University, and earned her M.A. in security studies from Georgetown University, with a concentration in terrorism and sub-state violence. Her research has focused on the psychology of female and adolescent terrorists.

"Post is a pioneer in the field of political-personality profiling."

"A damning study of Trump's mind that goes a long way toward explaining some damnably odd behavior."

"Dozens of books about Donald Trump have been published in 2019, but few are as clinically analytical as Dangerous Charisma by Jerrold M Post, the man considered the founding father of political personality profiling."

"This incisive analysis of illness and leadership is nothing short of a tour de force."

– Bert Park, M.D., author of The Impact of Illness on World Leaders (praise for Jerrold Post)

"This book is a breakthrough in the study of political leadership. Combines medical, political, and psychological analysis in a highly original account of the effects of aging and illness on political leaders in various times and cultures. It should be read by scholars and citizens alike, not least by those in power."

– Robert J. Tucker, author of Politics as Leadership and Stalin in Power, 1928-41 (praise for Jerrold Post)

"A sophisticated and knowledgeable treatment of a most complex and demanding subject. A book of top importance during an era when so many global and national leaders are subject to heavy stress and illness."

"A persuasive case for giving more attention to what to do when world leaders suffer serious ailments."

Jerrold Post has made it plain to those of us in government that the health and stability of heads of other nations may have as much to do with our national security as weapons and armies. Now he and Robert Robins bring that notion to a wider audience in a readable and important book.

"Presents numerous fascinating examples of how such diverse leaders as Winston Churchill, the Shah of Iran, Menachem Begin, the recent Soviet gerontocracy, Mao and Deng, and several American presidents have had their ability to lead diminished to the point that they became dangers to their nations. Highly recommended."

"A highly useful account of what is special about illness and incapacity in political leaders. A substantial contribution on a complex and fascinating subject."

The Political Psychology of Donald Trump and His Followers

By Jerrold Post and Stephanie Doucette
PRICE MAY VARY BY RETAILER