By Kara Lee Corthron
PRICE MAY VARY BY RETAILER

From the award-winning author of The Truth of Right Now comes a stunning, grounded fantasy in the vein of Dread Nation that follows a black teen as she finds her place among a family of women gifted with magical abilities.

In the Jim Crow South, white supremacy reigns and tensions are high. But Evalene Deschamps has other things to worry about. She has two little sisters to look after, an overworked single mother, and a longtime crush who is finally making a move.

On top of all that, Evvie’s magic abilities are growing stronger by the day. Her family calls it jubilation—a gift passed down from generations of black women since the time of slavery. And as Evvie’s talents waken, something dark comes loose and threatens to resurface…

And when the demons of Evvie’s past finally shake free, she must embrace her mighty lineage, and summon the power that lies within her.

1 Savior
HERE’S THE THING ABOUT ME: I ain’t normal. Never have been, never will be. So? That’s my private business and nobody else’s. I got no interest in drawin’ attention to myself for any reason other than my good looks and memorable personality. They don’t understand what I did yesterday, so they’re makin’ a big fuss. I hate it, but what am I sposeta do? Refuse a newspaper interview, with my mother so proud she’s finna combust?

“Can you remember what you were thinking when you first noticed that something was wrong?” a young reporter asks me. If I didn’t know better, I’d think he was in high school too.

“Nothin’,” I say. “I could just tell it was gonna fall, so I had to get them outta the way.” This is silliness. Who wouldn’t have done what I did?

He asks a few more questions; then he makes me pose for a photo with the family. The Pritchards. They flash toothy smiles at me, their savior. Had I not been there yesterday when a big ol’ oak tree was about to fall on them and their new, shiny T-Bird convertible, we would not be sittin’ here all sweet and harmonious.

The flashbulb blinds me, and I’m finally free to go. Mr. and Mrs. Pritchard thank me once again. Their toddlers run circles around us, and Mrs. Pritchard’s fat with another one on the way. T-Bird ain’t exactly a family car, but that’s none a my business.

“You should come over to our house for supper one night,” she offers. In a fraction of a second, Mr. Pritchard shoots her a look. Ain’t no way in hell he’s ever gonna let me step foot into his house. Not that I’d wanna go. Plus, white people can’t cook.

“Thank you, but I’m just glad y’all are safe,” I say in my good-girl voice with my forced good-girl smile. I leave the newspaper office’s steps with Mama beamin’ beside me.

“Imma stop sayin’ it, but I am so proud a you, baby. You’re so brave and selfless.”

“Honestly, I just didn’t have time to think,” I say.

“That means savin’ folks is just who you are then. Don’t lessen it. This is a great thing you done.”

We get to the bus stop and wait.

“Whatcha wanna eat tonight? I’ll make whatever you want, and you don’t even have to help me.”

“Maybe chicken and dumplin’s,” I tell her.

“Shoulda known. I was guessin’ you’d say shrimp and grits, but chicken and dumplin’s woulda been my second guess,” she says.

I mighta said “shrimp and grits,” but the last time I asked for it, she complained about the rising price of certain kinds a fish, so I thought it was off limits.

She bumps me with her shoulder, and I can’t help but grin. It’s a weird affectionate thing she used to do when I was little.

Mama doesn’t know the whole story, though. I’m not a hero.

It’s the end of a mostly mild spring. There was no storm or high winds. No reason for a giant oak like that to just plummet to the ground. I was foolin’ around cuz I got mad. I’d ridden my trusty Schwinn into a neighborhood I didn’t recognize. Hadn’t meant to, I just wasn’t payin’ attention. I stopped to figure out where I was and how I ended up there when a man approached me.

“Who do you belong to?” he asked, givin’ me the dirtiest look.

“No one. I just got lost,” I explained, backing me and my bike away from him.

“I suggest you get unlost ’fore you catch some real trouble,” he barked, and then he marched across the street to the car where his wife and kids waited for him. The wife was hollerin’ at the little ones to get in the car, but they didn’t pay her no mind.

When he got to the driver’s-side door, before gettin’ in, he said something to the woman, and she got closer to him. They talked for a few more seconds—I was too far away to hear what they said—and the wife looked over at me, shakin’ her head in disgust. Like the very sight a me was ruinin’ their whole day.

That ol’ oak tree was big enough and near enough that I thought, Wouldn’t it be somethin’ for these folks to have an accident right now?

It was a quick thought, and I don’t think I meant it, but it didn’t matter. A sharp headache ripped through me, and the tree started rockin’ at the bottom of its trunk. And it kept on rockin,’ harder and harder. Couldn’t believe my eyes. I tried to make it stop, but then I heard the unmistakable creakin’ sound of wood startin’ to snap.

I ran over and shoved the family outta the way. All of ’em. And then the tree came down, crushin’ that shiny new car.

Once they got over the initial shock, the kids started cryin’ and screamin’, and their parents tripped over each other thankin’ me. I made the mistake of tellin’ ’em my name, which is how the newspaper found me.

So yeah. Sure. I guess I saved the Pritchards from certain death. But nobody knows I tried to kill ’em first. 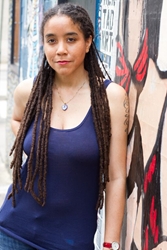 Kara Lee Corthron is an author, playwriter, and TV writer based in Los Angeles. She’s the author of The Truth of Right Now, winner of the Parent’s Choice Gold Award. Her plays, including What Are You Worth?, Welcome to Fear City, AliceGraceAnon, and Holly Down in Heaven, have been performed across the US, and she writes for the TV thrillers You (Netflix) and The Flight Attendant (HBO Max). She’s a multiyear MacDowell Fellow and a resident playwright at New Dramatists.

“A lyrical novel about a young Black woman discovering her power.” —PopSugar

“The exploration of home, and the reflection on how a place where you can’t be safe can nevertheless be called home, is powerful. A compelling story of first love and battling racism with a magical twist.” —Kirkus, starred review

“A well-told, fast-paced story about a teenage girl coming of age, while coming to terms with her family’s legacy.” —SLJ, starred review

“Corthron brings her writing talent to the realm of YA with a powerful story about a magic-wielding Black teen in the Jim Crow South...Corthron inventively explores America’s heinous racist history while telling the story of a Black teen grappling with a hostile culture on top of ordinary teenage growing pains, like a first crush. Readers swept up by Justina Ireland’s Dread Nation series will gravitate to this historical fantasy, almost as if by magic.” —Booklist

“The legacy of slavery, the persistence of racism, and the intergenerational trauma experienced by Black women and girls are explored with a deft hand. . . . Evvie’s narration is bold and self-assured.” —BCCB

By Kara Lee Corthron
PRICE MAY VARY BY RETAILER