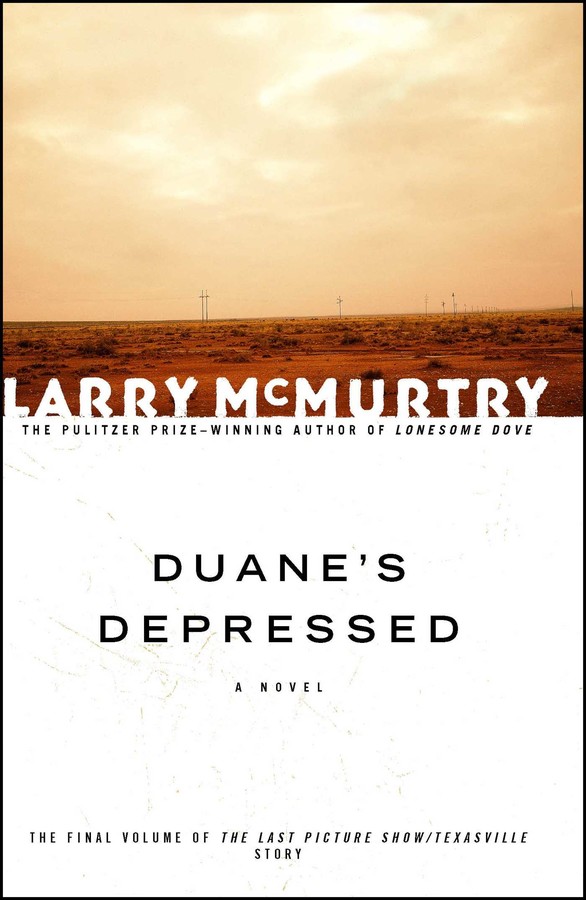 Funny, sad, full of wonderful characters and the word-perfect dialogue of which he is the master, McMurtry brings the Thalia saga to an end with Duane confronting depression in the midst of plenty.

Surrounded by his children, who all seem to be going through life crises involving sex, drugs, and violence; his wife, Karla, who is wrestling with her own demons; and friends like Sonny, who seem to be dying, Duane can't seem to make sense of his life anymore. He gradually makes his way through a protracted end-of-life crisis of which he is finally cured by reading Proust's Remembrance of Things Past, a combination of penance, and prescription from Dr. Carmichael that somehow works.

Duane's Depressed is the work of a powerful, mature artist, with a deep understanding of the human condition, a profound ability to write about small-town life, and perhaps the surest touch of any American novelist for the tangled feelings that bind and separate men and women.

Larry McMurtry (1936–2021) was the author of twenty-nine novels, including the Pulitzer Prize–winning Lonesome Dove, three memoirs, two collections of essays, and more than thirty screenplays. He lived in Archer City, Texas.

Publishers Weekly McMurtry at the top of his form.

The New York Times Book Review A worthy end to an important trilogy, one that captures vividly and movingly nearly half a century of life in a great swath of America.

Craig Nova The Washington Post Book World Duane's Depressed...defines the moment, and the consequences of it, when a man comes up against the confines of his life, both practical and spiritual, and decides that he has had enough...striking and moving.

SEE ALL
See more by Larry McMurtry
Thank you for signing up, fellow book lover!