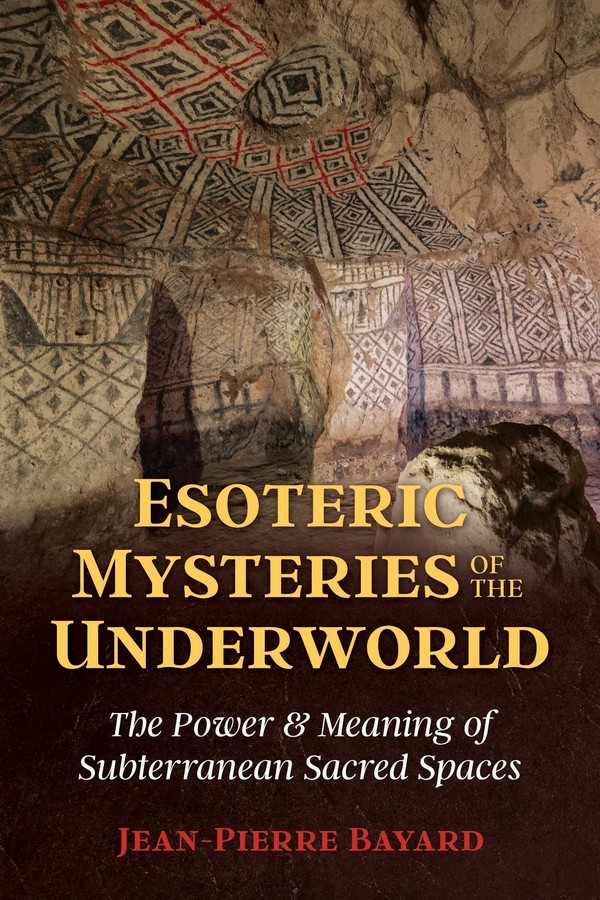 Esoteric Mysteries of the Underworld

The Power and Meaning of Subterranean Sacred Spaces

The Symbolism of the Underworld and the Cave

The infinite and untouched wealth of the world underground haunts the human imagination. This mysterious domain does not reveal itself to those who dwell above these deep, dark caverns whose strange, dull noises inspire dread and superstition. But if we go even a short way down into these “inferna immanis,” we are soon struck dumb with wonder: vast halls sparkling with crystals open up before our eyes. Before us lies a luxurious and fabulous landscape. It would come as no surprise if we were to encounter fairies here, the guardians of all this wealth.

Despite so much bewitching beauty, the reader will not find descriptions of caves to explore in this book. Nor will I speak of the troglodytes or the flora and fauna of the underground realms. My chief desire is to study all the manifestations of the underground fire, to interrogate these hell mouths in which giants have been interred and to examine sacred caves and labyrinths. I hope with this to show that aspect of initiation offered us by all the mythology and legendary tales of the world below.

Every human being is born from clay and to clay he shall return. The cave therefore is no longer perceived as a fay and enchanting place but rather the dark womb in which the genesis of the world takes shape. According to Ossendowski, this supreme center went underground some six thousand years ago, at the onset of the Dark Age. We are still living in an era in which all is becoming darker and more confusing; however, this Tower of Babel era will eventually end. In order to find this central point, and create clarity and radiant strength, the human being strives to communicate with Mother Earth.

This allows us to come into contact with the theme of the descent of the spirit into matter. One must possess great courage to approach this underground palace of the double axe. It is necessary to suffer, to undergo physical torments, to show proof of your valor to deserve the bliss that comes from finding personal fulfillment. The hero must descend into hell, the lower but sacred place and abode of shades. In the center of the earth he will find the subterranean fire. If he can cross through it without being burned he proves that he is worthy of returning to the surface of the world and to the light.

The initiation of Eleusis offers us this mystery that in Japanese mythology is found again with Izanagi. We also see the goddess Ishtar descending into the hells while the Ancient Greeks offer us a chthonian Artemis who guides humans through the terrors of the underworld. Hell is therefore not only the place of eternal suffering. Cicero tells us that near the Lake of Avernus, in the vicinity of Pozzuoli in Campania, the souls of the dead are evoked thanks to the many cavities that pierce the hills with their sacred groves. According to Strabo, the cave of Arechousia in Hierapolis, sacred to Cybele, was nothing other than the gate to the underworld. This passageway should be sought out as it not only allows the individual to reach the “middle hall” and enjoy its regenerative powers, but also puts him or her in contact with the souls of the dead--whose knowledge can be quite useful.

The human being is fully realized in the primordial lair. The dead body is buried in order to not delay the cycle of earthly lives, to activate his or her reincarnation, and to allow the soul of the deceased to avoid long periods of torment. There is a very specific ritual for establishing contact between the dead body and the earth mother. The crypt--which is the source of the word grotto--is associated with the underground chapel intended to serve as a tomb for the saints and martyrs of the early Church.

The spirits of the underworld do not remain inactive. Divine smiths create miraculous weapons in their underground smithies, and alchemists and hermeticists search there for the Philosopher’s Stone. The Neolithic cave became the site of prehistoric initiation and the cult of Eleusis. The Earth, the Great Mother Goddess, is paid her most enduring worship here, which can still be seen in the worship of the Black Madonna, the figure of the higher woman. In the curious Tomb of the Christian Woman at the Royal Mausoleum of Mauretania in Algeria, with all its underground chambers and cabinets of reflection we can feel the presence of Moses, Pythagoras, Triptolemus, and Orpheus, who after being immersed in the darkness, were reborn in the sparkling light of illumination, as Plato tells us in an allegory in the seventh book of The Republic and in Phaedrus.

But over the course of the chapters that make up this book, we will find stable values that still belong to this earth. Water plays a major role in human life. After the waters of our birth, green algae and baptismal water purify the spirit. The tree takes root in the great secrecy of the world below; it establishes communication between the earth and sky and makes possible the exchange of waves that remain poorly defined. We also find in the underground realms the Stone, whose magnetic and virginal life remains a witness to the past, the initial crystallization of the universe; the sparkling gem takes part in this sacred life.

But in the midst of these stones, the hermetic foreshadowing of the Black Madonnas, we find subterranean serpentine passageways. These “strait gates” allow the serpent to enter. Those tunnels that start in the banks of the Nile and extend toward the Libyan Desert are called “Passages of the Serpent.” Here is where the mysteries of the “cycles of necessity” unfold.

Jean-Pierre Bayard was a prolific esoteric scholar, authoring more than 50 books on subjects such as Rosicrucianism, secret societies, symbolism, and the spiritual aspect of Freemasonry. An active member of the Masonic Supreme Council of France, he passed away in 2008 in Angers, France.

Esoteric Mysteries of the Underworld

The Power and Meaning of Subterranean Sacred Spaces