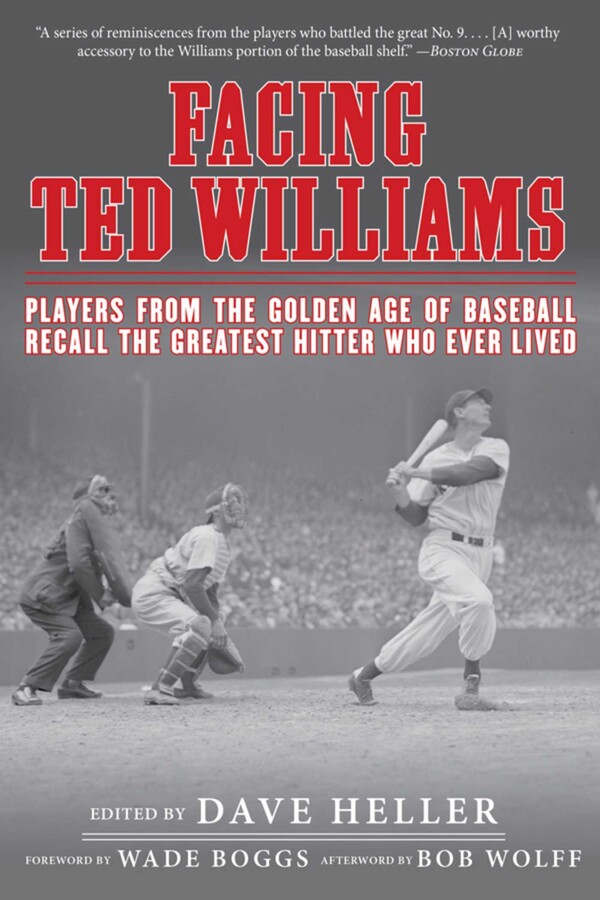 The Splendid Splinter,” Teddy Ballgame,” The Kid”no matter the nickname, Ted Williams was one of the most accomplished hitters in baseball history. He was the last man to hit .400 in a single season, a nineteen-time All-Star, a two-time MVP and Triple Crown award winner, and an inductee into the National Baseball Hall of Fame in 1966 . . . all while serving his country in World War II and the Korean War.

Far from a conventional biography, Facing Ted Williams aims to offer a different perspective with testimonials from teammates and opponents alike on how Williams was regarded among his peers. See Ted Williams through the eyes of pitchers struggling to put a fastball past his bat, the infielders and outfielders adjusting their positions in the hopes that they can fill the hole where a frozen rope might land, and the catchers as they strategize a Williams at-bat, pitch-by-pitch. Facing Ted Williams provides riveting insights from many baseball legends, including:

Bob Feller
Mudcat Grant
Bobby Richardson
Don Larsen
Bob Friend
And many more!
Whether you’re a Red Sox fanatic, a casual baseball fan, or perhaps just an admirer of the fabled war hero and slugger, this book is sure to be a fresh and compelling look at this classic baseball icon. Much like Williams himself, Facing Ted Williams is sure to be a home run for all walks of baseball fandom, so don’t swing and miss!

“Now we have something new: A series of reminiscences from the players who battled the great No. 9. . . . In Facing Ted Williams, Dave Heller did yeoman’s work tracking down a range of players, from perennial all-stars to guys whose cup of coffee in the Show was more like a shot of Joe. . . . [A] worthy accessory to the Williams portion of the baseball shelf.”
—Boston Globe

“There's a neat book out called 'Facing Ted Williams' that's worth checking out if you're a Red Sox fan, Williams fan or just a fan of players talking about baseball from the old days…a fun project by Heller, something different than the standard biography.”
—David Schoenfield, ESPN.com

“What was it like to pitch to the greatest hitter who ever lived? Now we know.”
—Dan Shaughnessy, New York Times bestselling author of Francona: The Red Sox Years

“…the soul of Facing Ted Williams is the stories, and those, like the sweet swing of a Ted Williams’ home run, are delightfully satisfying.” —New York Journal of Books

“A very enjoyable and revealing view—both literally and figuratively—of perhaps the greatest hitter of all time. Even ‘The Splended Splinter’ probably would have been impressed by Dave Heller’s prodigious amount of research.”
—Jack Cavanaugh, author of Tunny, Giants Among Men, and Season of '42

“In this ambitious and engaging project, Heller set out to get the truth straight from the players’ mouths. . . . What also emerges through Heller’s dogged efforts is a scrapbook-style look at the way the game was played in the 1940s and '50s…”
—Milwaukee Journal Sentinel

“As the author of several books on Ted Williams, with a couple of more in the wings, Facing Ted Williams is an idea I wish I’d had.”
—Bill Nowlin, author of So You Think You're a Boston Red Sox Fan? and co-author of Red Sox vs. Yankees

“A penetrating inside look at the 'Splendid Splinter' from those who played against him. Facing Ted Williams is a must-have for fans of baseball’s Golden Age.”
—Glen Waggoner, former editor for ESPN: The Magazine and author of Baseball by the Rules

More books in this series: Facing