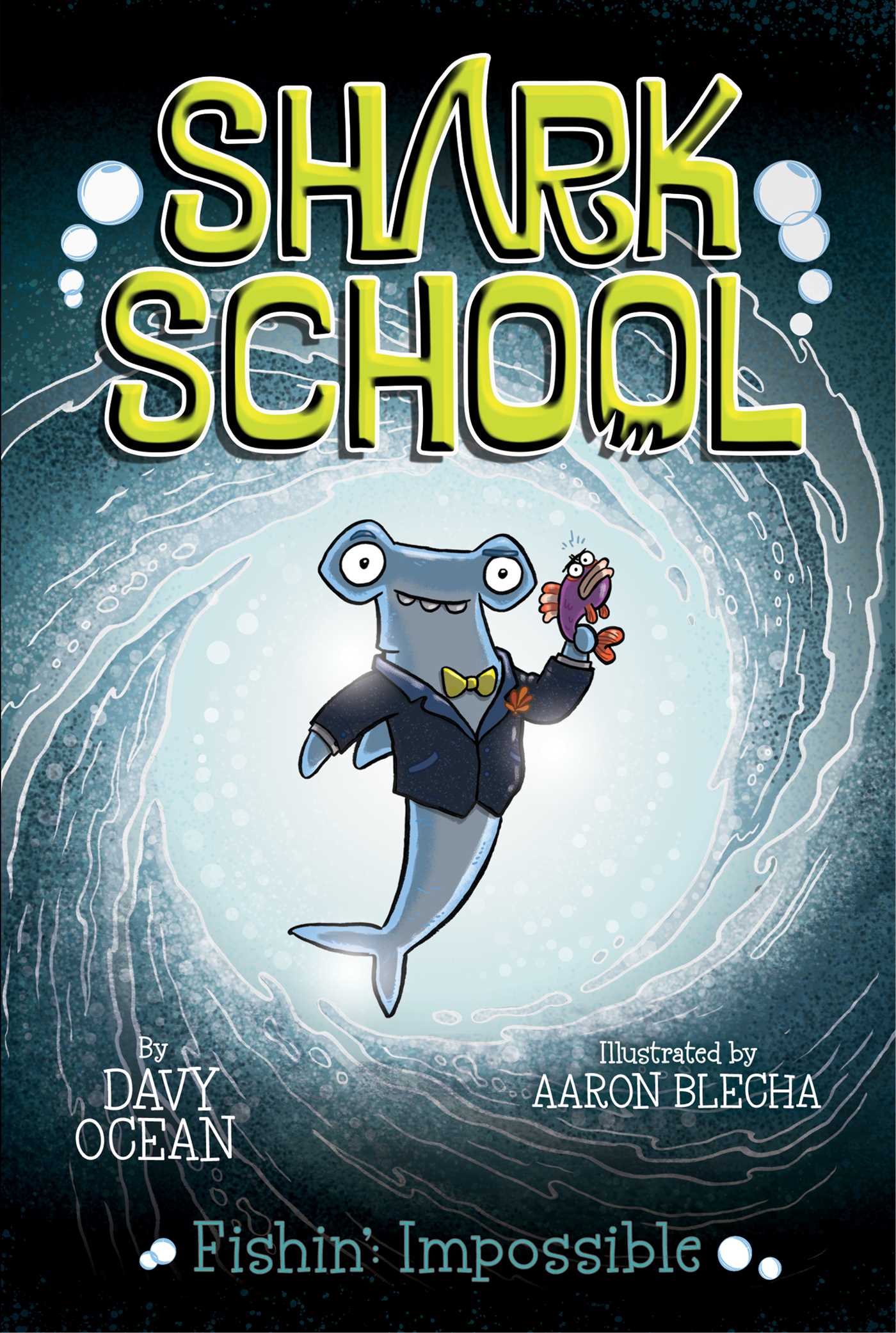 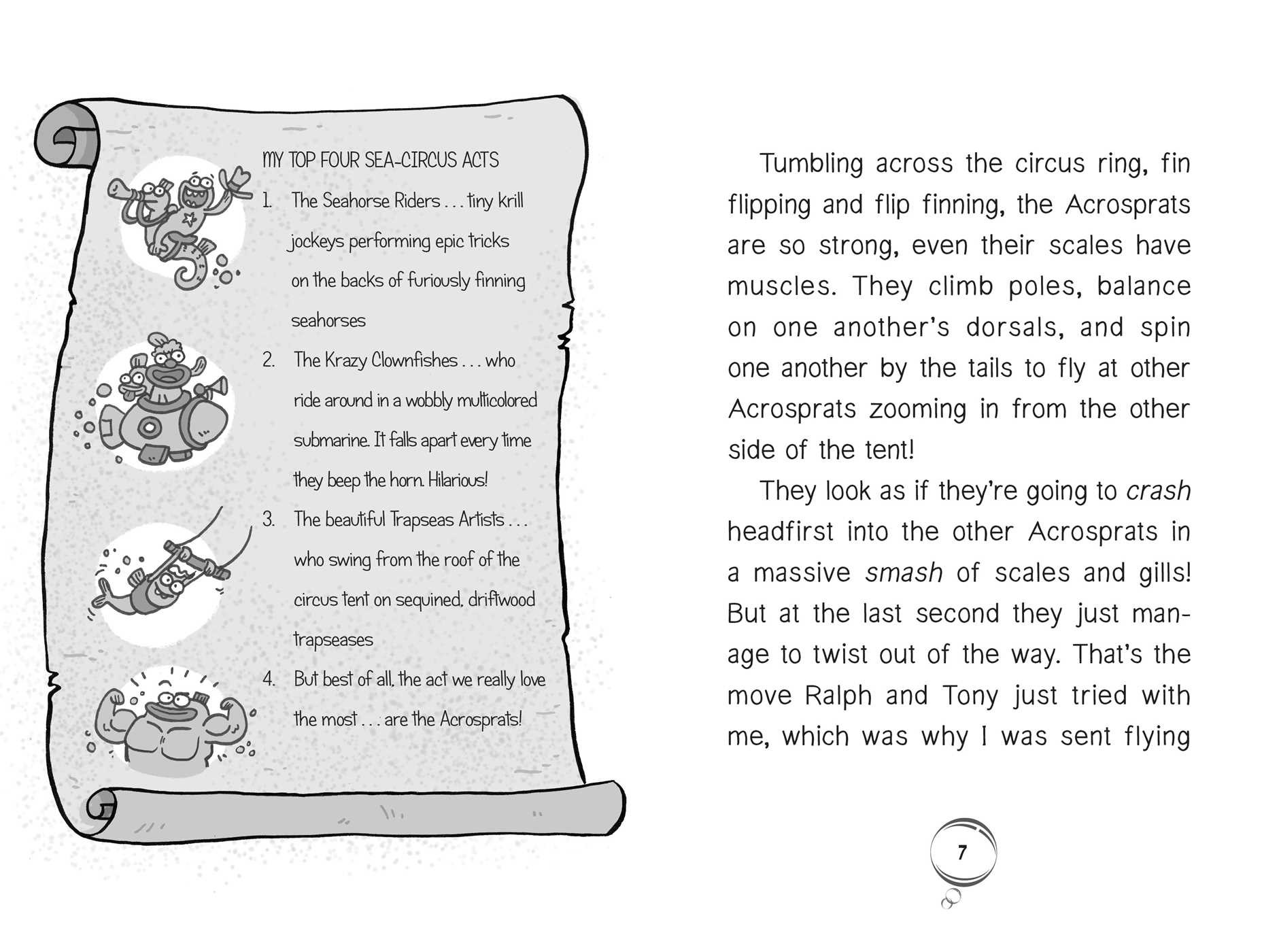 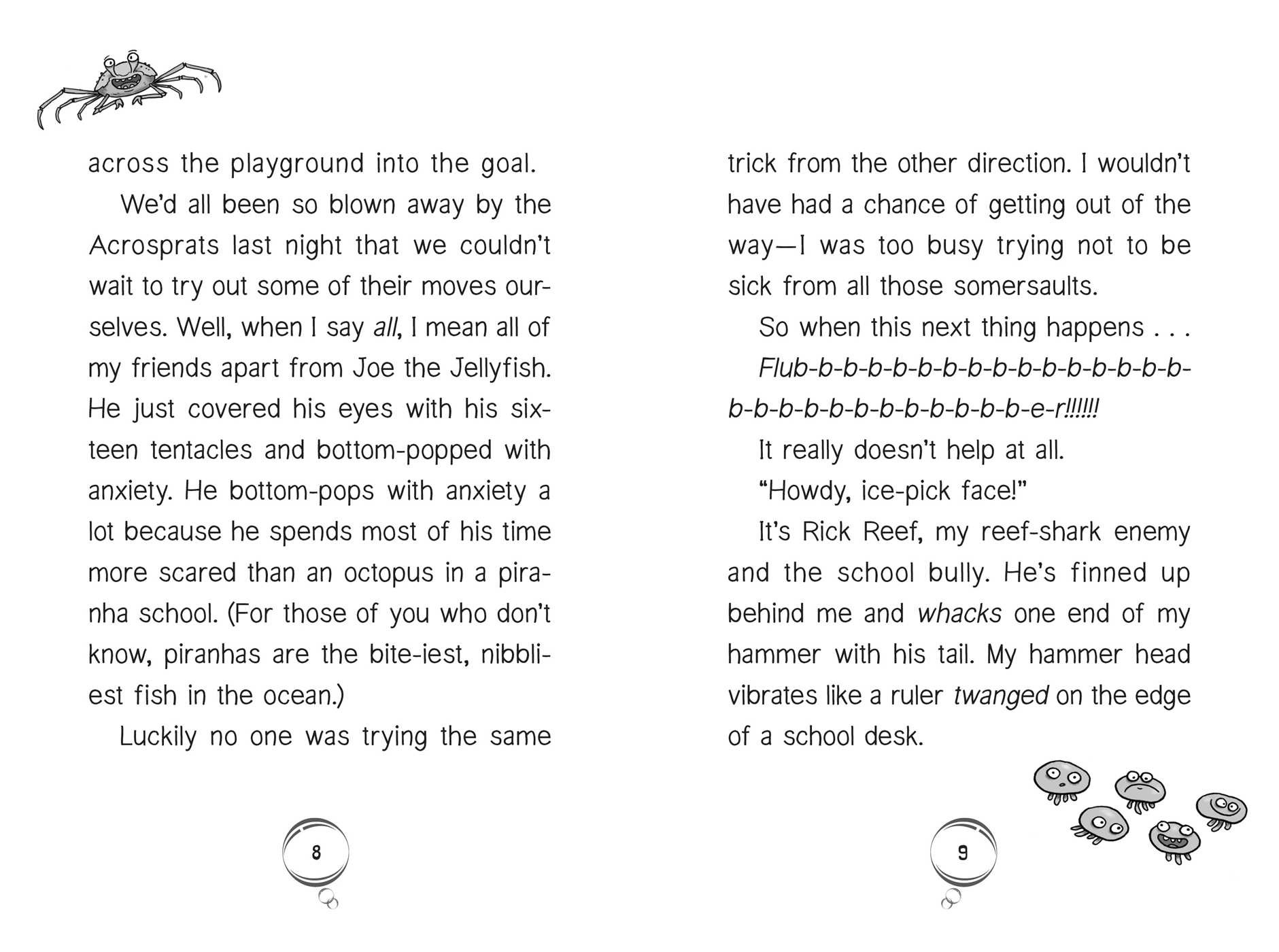 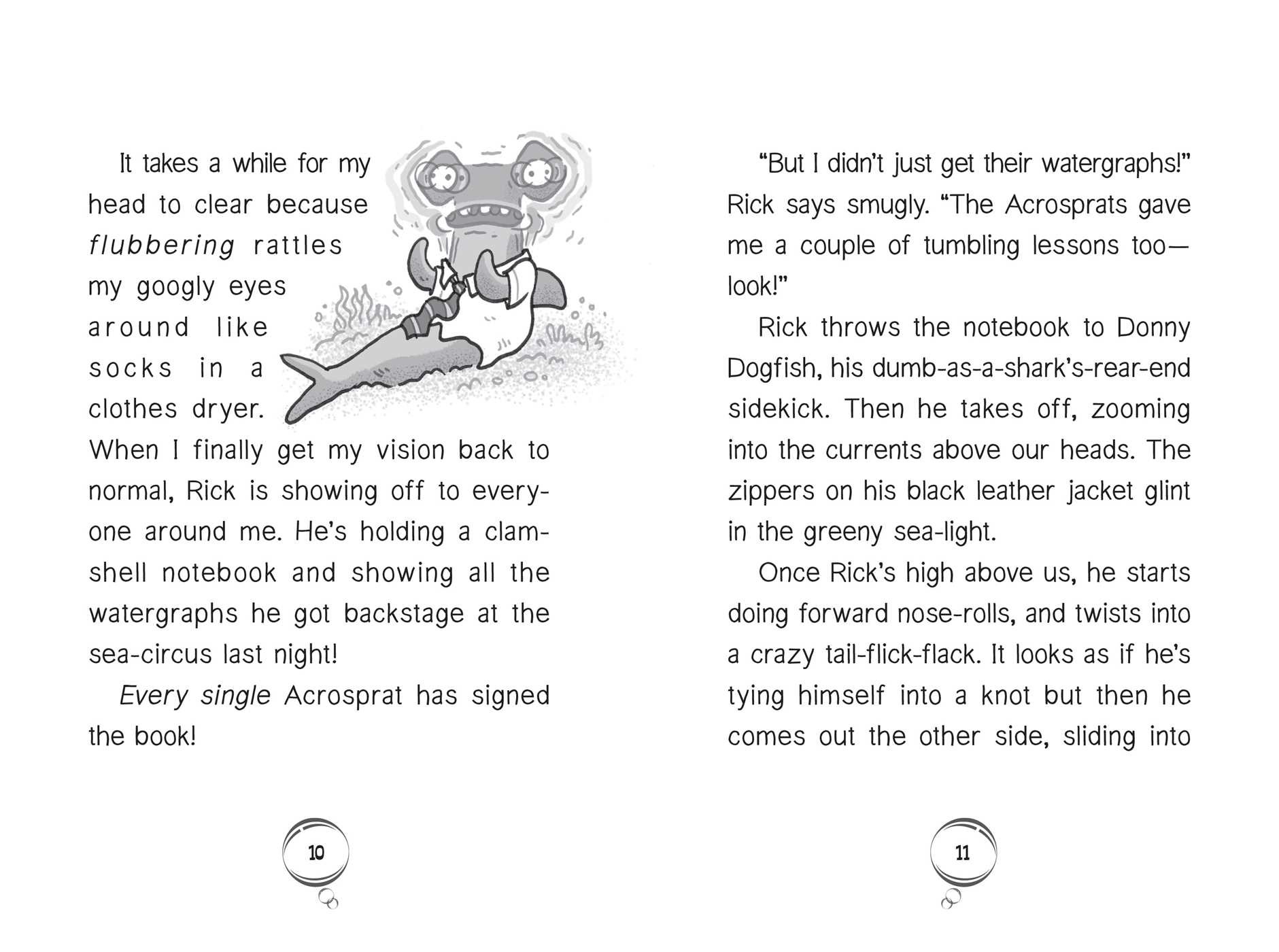 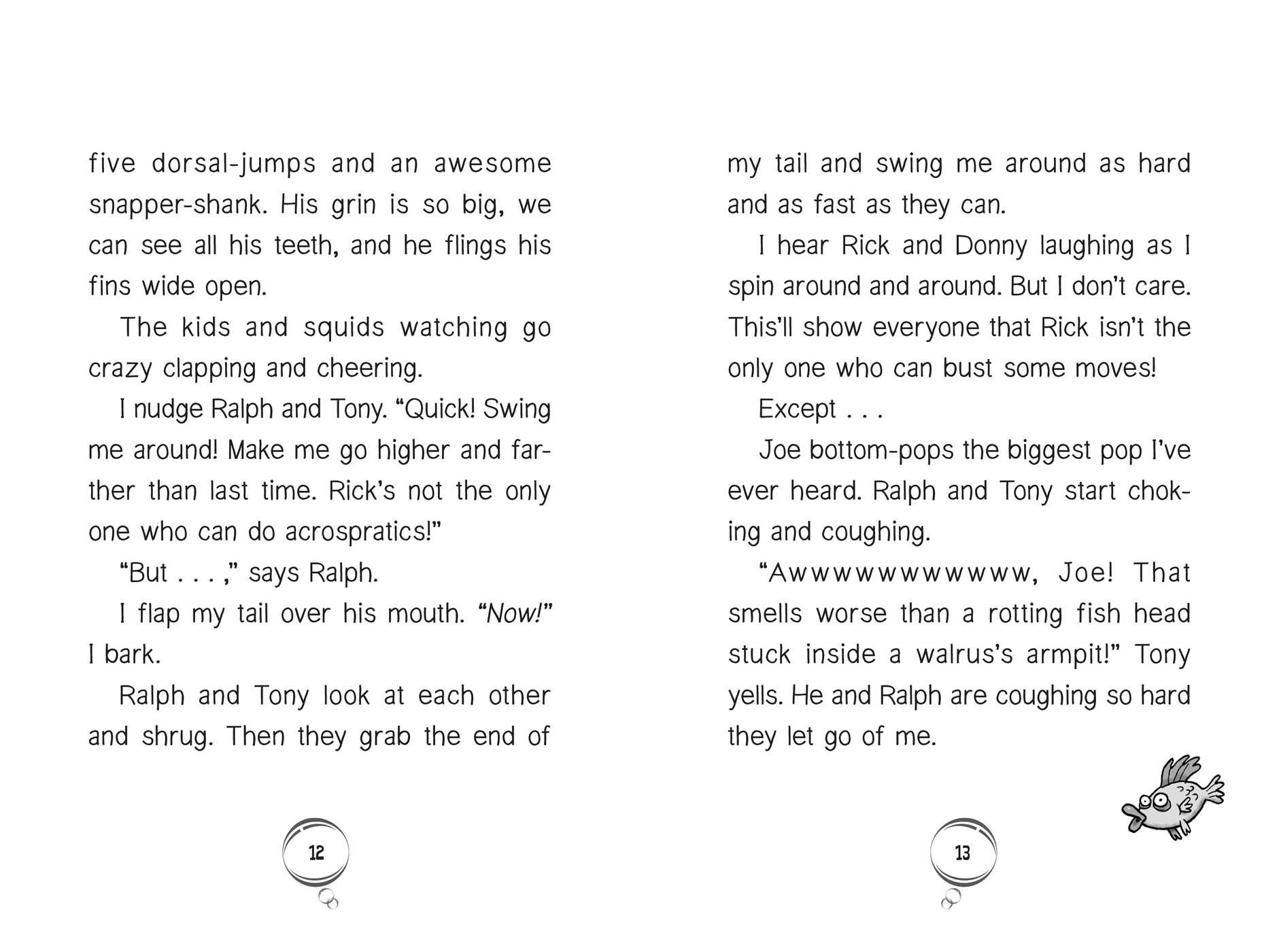 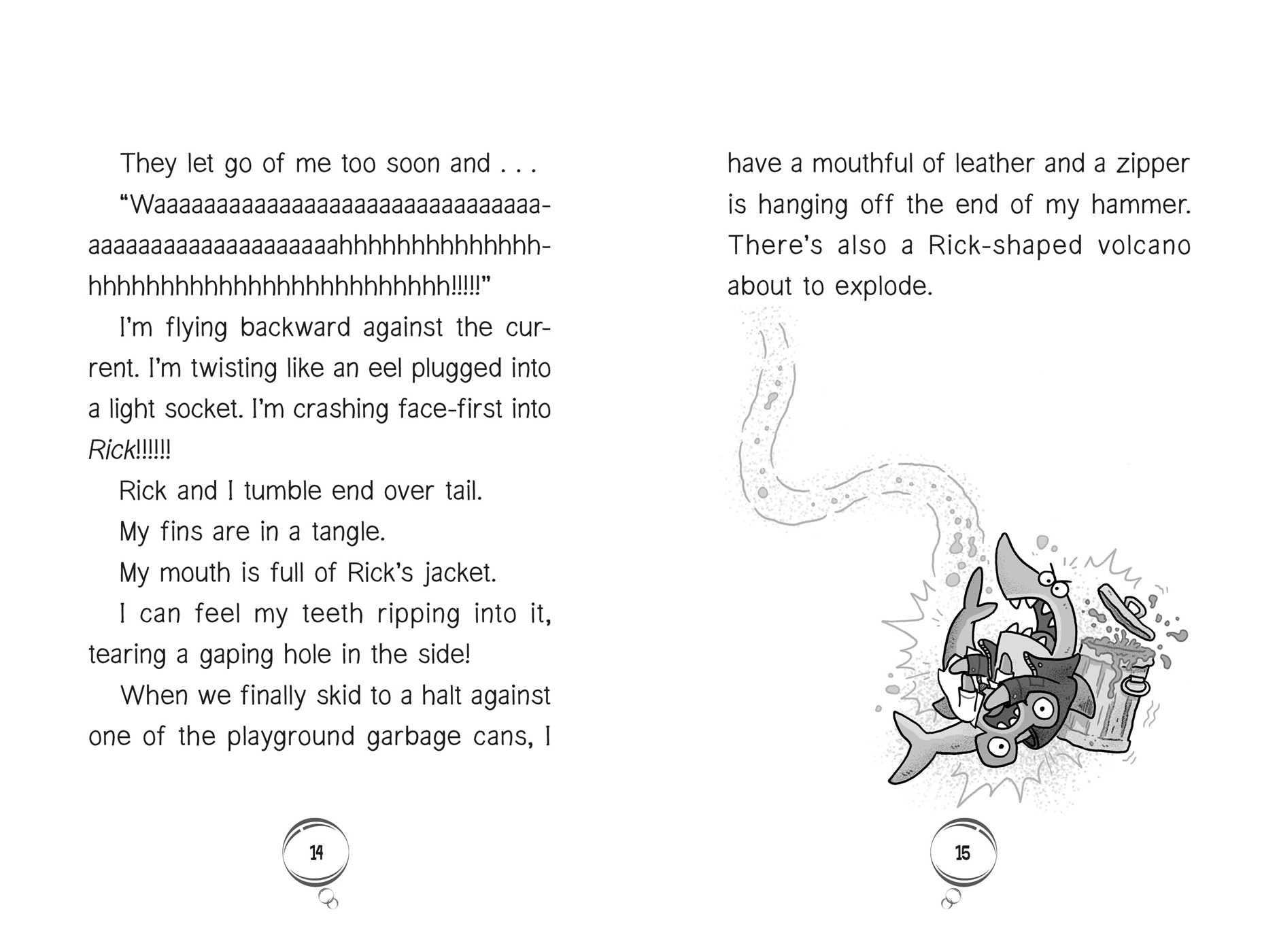 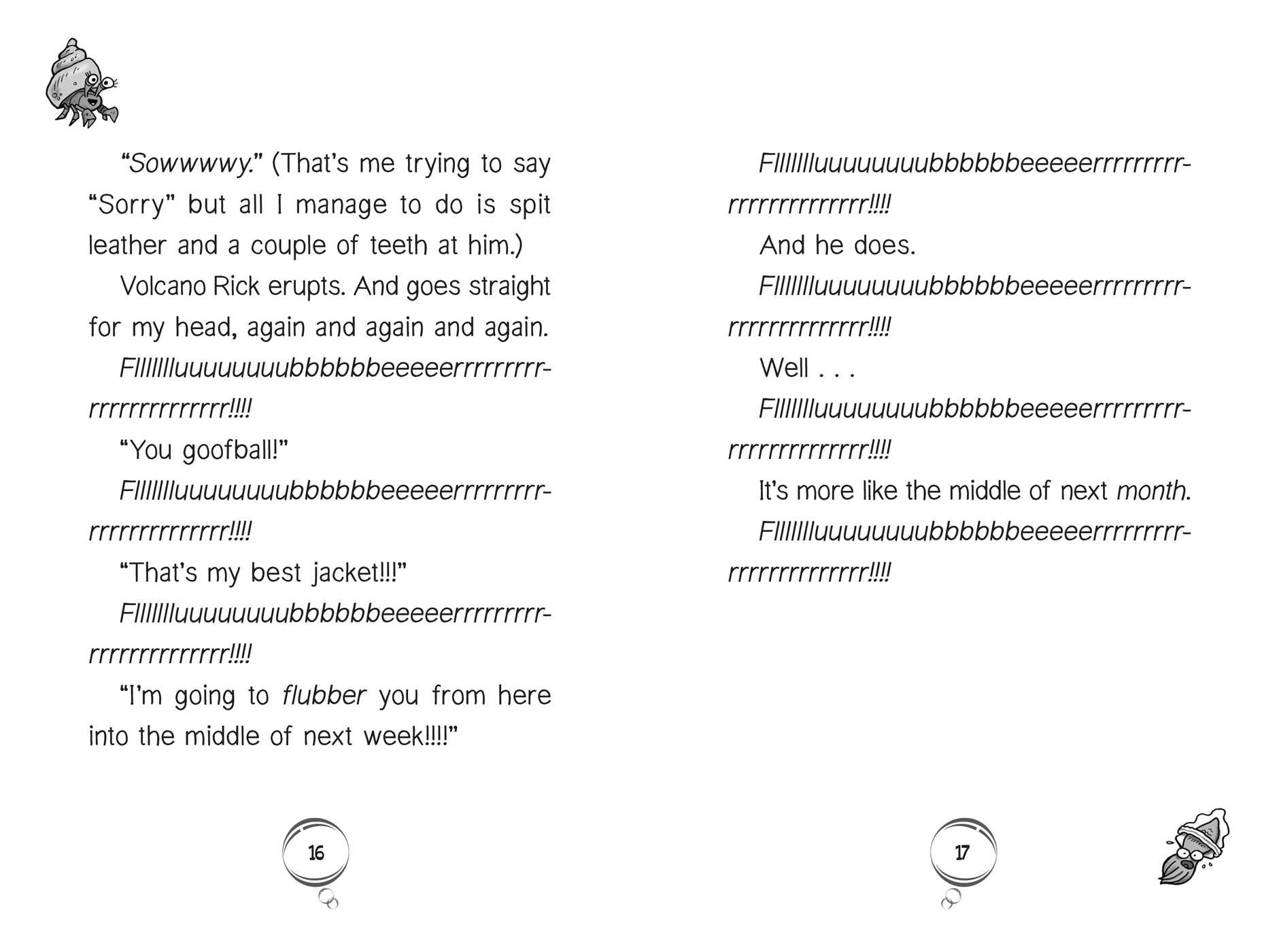 Harry does some deep sea detective work while investigating the fishy disappearance of his worst enemy in this eighth Shark School (mis)adventure.

Harry Hammer’s all-time favorite TV show is Mike Hammerhead, Shark Detective. The fin-tastic detective never fails to solve under-the-sea ‘who-dunnits’ and now Harry has found himself in similar water when he investigates the disappearance of his worst enemy Rick Reef. Has his nemesis gone missing or gone fishing?!

That is the sound of me being swung by the tail.

I’m a hammerhead shark. Which means I have a hammer-shaped head at one end, and a tail at the other. Which means I’m the dorkiest-looking shark there is, ever, in the history of shark (and that goes way, way, way back).

And that’s the sound of me flying across the school playground, over the heads, fins, and tentacles of the other kids and squids.

I bounce on the finball field straight into the goal, bulging in the net like a leggy air-breather’s catch.

I guess you want to know why this is happening to me.

As I lie here upside down, and feeling more than a little inside out, I’m asking myself the very same question.

But before I can find a proper answer, I’m being dragged out of the goal by my friends Tony the Tiger Shark and Ralph the Pilot Fish.

“Wow!” says Tony, turning me the right way up.

“Double wow!” says Ralph, straightening my school blazer and glancing into my mouth. He’s trying to see if my crash landing has dislodged any leftover breakfast from my teeth. Ralph is a pilot fish, and pilot fish love eating leftover food from sharks’ teeth. That might seem gross to you leggy air-breathers, but to me it’s the best way of having my teeth cleaned. At least I don’t have to do it half asleep at the mirror while my mom moans at me about the state of my bedroom.

So why was I being spun around and thrown through the sea like a rubber-headed javelin made of shark? It’s because the sea-circus has come to town and we all went last night. It was great.

2. The Krazy Clownfishes . . . who ride around in a wobbly multicolored submarine. It falls apart every time they beep the horn. Hilarious!

3. The beautiful Trapseas Artists . . . who swing from the roof of the circus tent on sequined, driftwood trapseases

Tumbling across the circus ring, fin flipping and flip finning, the Acrosprats are so strong, even their scales have muscles. They climb poles, balance on one another’s dorsals, and spin one another by the tails to fly at other Acrosprats zooming in from the other side of the tent!

They look as if they’re going to crash headfirst into the other Acrosprats in a massive smash of scales and gills! But at the last second they just manage to twist out of the way. That’s the move Ralph and Tony just tried with me, which was why I was sent flying across the playground into the goal.

We’d all been so blown away by the Acrosprats last night that we couldn’t wait to try out some of their moves ourselves. Well, when I say all, I mean all of my friends apart from Joe the Jellyfish. He just covered his eyes with his sixteen tentacles and bottom-popped with anxiety. He bottom-pops with anxiety a lot because he spends most of his time more scared than an octopus in a piranha school. (For those of you who don’t know, piranhas are the bite-iest, nibbliest fish in the ocean.)

Luckily no one was trying the same trick from the other direction. I wouldn’t have had a chance of getting out of the way-I was too busy trying not to be sick from all those somersaults.

So when this next thing happens . . .

It really doesn’t help at all.

It’s Rick Reef, my reef-shark enemy and the school bully. He’s finned up behind me and whacks one end of my hammer with his tail. My hammer head vibrates like a ruler twanged on the edge of a school desk.

It takes a while for my head to clear because flubbering rattles my googly eyes around like socks in a clothes dryer. When I finally get my vision back to normal, Rick is showing off to everyone around me. He’s holding a clamshell notebook and showing all the watergraphs he got backstage at the sea-circus last night!

Every single Acrosprat has signed the book!

“But I didn’t just get their watergraphs!” Rick says smugly. “The Acrosprats gave me a couple of tumbling lessons too-look!”

Rick throws the notebook to Donny Dogfish, his dumb-as-a-shark’s-rear-end sidekick. Then he takes off, zooming into the currents above our heads. The zippers on his black leather jacket glint in the greeny sea-light.

Once Rick’s high above us, he starts doing forward nose-rolls, and twists into a crazy tail-flick-flack. It looks as if he’s tying himself into a knot but then he comes out the other side, sliding into five dorsal-jumps and an awesome snapper-shank. His grin is so big, we can see all his teeth, and he flings his fins wide open.

The kids and squids watching go crazy clapping and cheering.

I nudge Ralph and Tony. “Quick! Swing me around! Make me go higher and farther than last time. Rick’s not the only one who can do acrospratics!”

Ralph and Tony look at each other and shrug. Then they grab the end of my tail and swing me around as hard and as fast as they can.

I hear Rick and Donny laughing as I spin around and around. But I don’t care. This’ll show everyone that Rick isn’t the only one who can bust some moves!

“Awwwwwwwwwww, Joe! That smells worse than a rotting fish head stuck inside a walrus’s armpit!” Tony yells. He and Ralph are coughing so hard they let go of me.

I’m flying backward against the current. I’m twisting like an eel plugged into a light socket. I’m crashing face-first into Rick!!!!!!

Rick and I tumble end over tail.

My fins are in a tangle.

My mouth is full of Rick’s jacket.

I can feel my teeth ripping into it, tearing a gaping hole in the side!

When we finally skid to a halt against one of the playground garbage cans, I have a mouthful of leather and a zipper is hanging off the end of my hammer. There’s also a Rick-shaped volcano about to explode.

“Sowwwwy.” (That’s me trying to say “Sorry” but all I manage to do is spit leather and a couple of teeth at him.)

“I’m going to flubber you from here into the middle of next week!!!!”