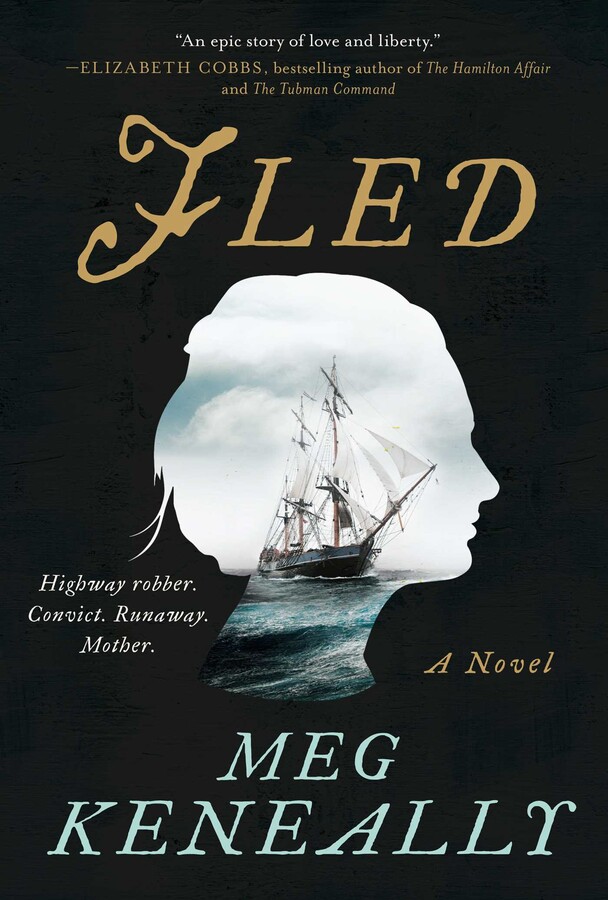 By Meg Keneally
PRICE MAY VARY BY RETAILER

The outlaw who became a folk hero for her daring sea voyage to escape oppression in the penal colony that was Australia—"Keneally's Jenny is a powerful personality" (Daily Mail). Soon to be a major movie.

Based on the life of an incredible historical heroine, Fled retells the story of a harrowing journey in search of love, justice, and freedom, told by the daughter of best-selling author Thomas Keneally (Schindler's List).

Jenny Gwyn has proven herself a survivor. Faced with destitution after the death of her father, she toughens her skin to become a highwaywoman in order to support her impoverished family. But one fatal mistake leads to her arrest, and the king’s justice demands her death. Rather than beg for mercy, Jenny condemns the system that would have her choose between obeying the law and dying, and breaking it for a chance to live. Her ferocity convinces the judge to spare her life, sentencing her and dozens of other convicts to a transport across the world to help settle England's newest colony in Australia.

After being contained on a filthy ship and selling her body for protection, Jenny is horrified to learn that her struggles have only just begun. The harsh landscape of Sydney Cove isn't welcoming to its new settlers with its arid climate and precious little fresh water, and despite the lack of shackles or bars, she and the others are still prisoners under the strict watch of Governor Edward Lockharty, and no amount of cunning can earn his favor. Jenny refuses to submit to the governor or to the barren land unable to support the growing population. Determined to find a better life for herself and her children, she braves the sea, and a journey of over three thousand miles in a small rowboat, for a chance at a future worth fighting for.

Based on the true story of Mary Bryant, an iconic figure in the foundation lore of Australia as Great Britain's penal colony, Fled is a sweeping, heart-wrenching account of one woman's life-long search for freedom.

Meg Keneally has worked as a journalist and radio producer. She is the co-author of The Soldier's Curse, first book in The Monsarrat series, which she wrote with her father, Booker-Prize winner Tom Keneally. Fled is her debut work. She lives in Sydney, Australia.

"Based on the true story of Mary Bryant, an iconic figure in the foundation lore of Australia as Great Britain's penal colony, Fled is a sweeping, heart-wrenching account of one woman's life-long search for freedom."—Fantastic Fiction

"A tragedy of epic proportions . . . It is a testament to Keneally's dexterity that she is able to bring Jenny into focus as both a historical figure and a stand-in for others like her without losing the thread of her narrative. The reader can't help feeling implicated as a spectator of unimaginable hardship."—The New York Times Book Review

"The pages fly by. Keneally's tale of this fierce, passionate, unstoppable woman will leave you breathless—and wanting more. An epic story of love and liberty."—Elizabeth Cobbs, bestselling author of The Tubman Command

"Meg Keneally's fast-paced Fled grabs you by the collar and yanks you through a riveting story of unexpected twists and turns that will leave you breathless. Jenny Trelawney Gwynn is fierce, brash, and independent. She may be an 18th century convict, but she's a heroine worthy of our 21st century #MeToo moment."—Stephanie Storey, author of Oil and Marble: a Novel of Leonardo and Michelangelo

"A real page-turner, this breathtaking yarn will keep you on the edge of your seat."—Dr. Jonathan King, author of Mary Bryant - Her Life and Escape from Botany Bay

"An irresistible feast of history, adventure, intrigue and tragedy. Epic yet tender. Authentic yet inspired."—Clare Wright, author of You Daughters of Freedom

"I was utterly absorbed—swept up and transported into convict life. Jenny Trelawney's struggles—her intelligence, courage, and grit—as well as Meg Keneally's beautifully understated writing, kept me up past bedtime night after night."—Jane Rawson, author of From the Wreck

“Meg Keneally’s Fled is a page-turning high seas adventure led by an unlikely and utterly compelling woman. Jenny Trelawney Gwynn is the just the sort of literary heroine the world needs right now. By turns a grieving daughter, a thief, a convict, a fugitive, a mother, a wife, and an 18th century pop culture icon, she proves herself equal to any man and superior to most. I was cheering for Jenny from the first page to the last."—Tiffany Quay Tyson, award-winning author of The Past is Never

"Fled is one of the most satisfying historical fiction accounts in recent memory, reminiscent of Peter Carey at the height of his powers . . . a triumph of feminist determination. If this is the standard Keneally is setting, it will be no surprise to see that famed surname etched anew on the nation’s literary awards."—Saturday Paper (Australia)

"A colorfully detailed showcase for the limits of courage, daring, and human resourcefulness. Keneally's Jenny is a powerful personality."—Daily Mail

"Phenomenal. . . . An extraordinary story that is almost too fantastic to be believed."—Booktopia

"Stunning . . . a wonderfully adventurous novel. . . . Woven with style, built on solid research and an insight into times past."—The Book Trail

By Meg Keneally
PRICE MAY VARY BY RETAILER