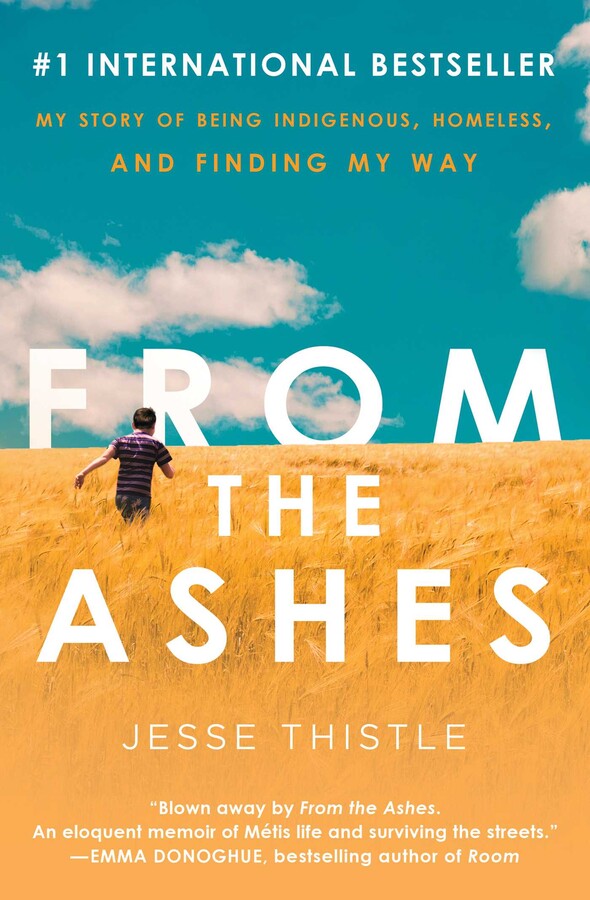 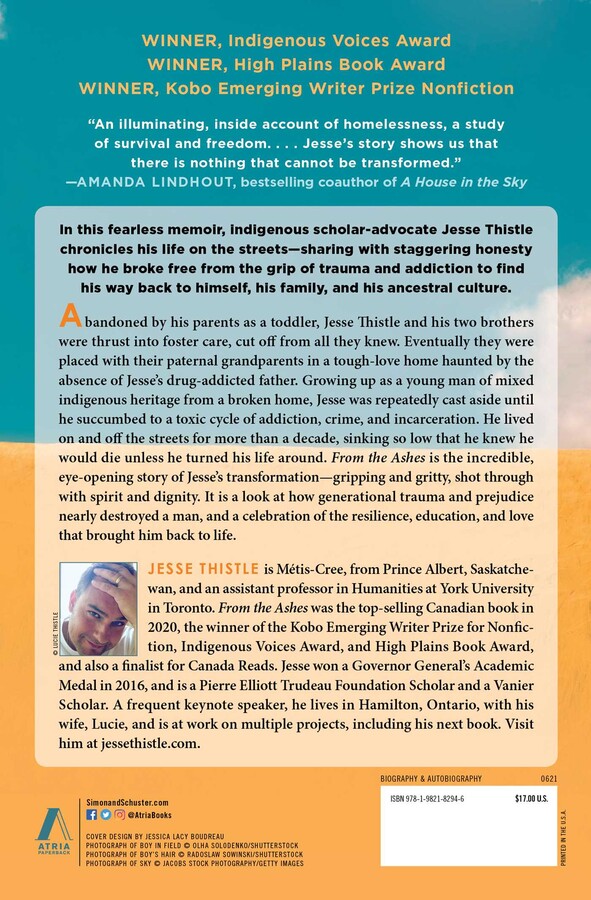 My Story of Being Indigenous, Homeless, and Finding My Way

By Jesse Thistle
PRICE MAY VARY BY RETAILER

This #1 internationally bestselling and award-winning memoir about overcoming trauma, prejudice, and addiction by a Métis-Cree author as he struggles to find a way back to himself and his Indigenous culture is “an illuminating, inside account of homelessness, a study of survival and freedom” (Amanda Lindhout, bestselling coauthor of A House in the Sky).

Abandoned by his parents as a toddler, Jesse Thistle and his two brothers were cut off from all they knew when they were placed in the foster care system. Eventually placed with their paternal grandparents, the children often clashed with their tough-love attitude. Worse, the ghost of Jesse’s drug-addicted father seemed to haunt the memories of every member of the family.

Soon, Jesse succumbed to a self-destructive cycle of drug and alcohol addiction and petty crime, resulting in more than a decade living on and off the streets. Facing struggles many of us cannot even imagine, Jesse knew he would die unless he turned his life around. Through sheer perseverance and newfound love, he managed to find his way back into the loving embrace of his Indigenous culture and family.

Now, in this heart-wrenching and triumphant memoir, Jesse Thistle honestly and fearlessly divulges his painful past, the abuse he endured, and the tragic truth about his parents. An eloquent exploration of the dangerous impact of prejudice and racism, From the Ashes is ultimately a celebration of love and “a story of courage and resilience certain to strike a chord with readers from many backgrounds” (Library Journal).

By clicking 'Sign me up' I acknowledge that I have read and agree to the privacy policy and terms of use. Free ebook offer available to NEW US subscribers only. Offer redeemable at Simon & Schuster's ebook fulfillment partner. Must redeem within 90 days. See full terms and conditions and this month's choices.
From the Ashes
Jesse Thistle
Reading Group Guide

This reading group guide for FROM THE ASHES includes an introduction and discussion questions. The suggested questions are intended to help your reading group find new and interesting angles and topics for your discussion. We hope that these ideas will enrich your conversation and increase your enjoyment of the book.

Jesse Thistle, once a high school dropout and now a rising Indigenous scholar, chronicles his life on the streets and how he overcame trauma and addiction to discover the truth about who he is.

From the Ashes is a remarkable memoir about hope and resilience, and a revelatory look into the life of a Métis-Cree man who refused to give up.

1. Consider Jesse’s childhood pain and constant longing for his parents’ love. How are hunger and longing significant to Jesse and his memories of his childhood? How do they shape who he becomes? How do these feelings transform throughout the memoir?

2. Consider Jesse’s taunts and anger toward his brother. What exactly does Jesse seem to hate? Why do you think Jesse rejects his heritage despite his longing? How can we make connections between his anger at his parents, his frustration with himself, and his rejection of his heritage?

3. Throughout the memoir, the power of choice, and the results of making the "right" choice, weigh on Jesse. In what ways does he seem to feel like he has no choice, like he must behave in ways he knows are wrong? How do others try to convince him that he does have a choice? What seems to fuel Jesse’s decisions throughout the book?

4. How can we consider Jesse’s actions as a function of the many traumas he’s faced? How did his brothers somehow heal from that trauma? What does the story suggest about the healing powers of reclaiming one’s heritage/becoming self-aware?

5. Why does it affect Jesse so much when Karen tells him he should be proud of his heritage? Why do you think he was scared to tell her at first? Why does it seem to be so significant to him that she’d say that and that her family took enthusiastic interest?

6. When Jesse and his grandmother go to shop at the Bay, she declares, “Our family built this country, Jesse.” How does her past and her story contrast with the common European understanding of Canadian history?

7. How do Jesse’s interactions with other minorities underline the themes of power imbalances throughout the memoir? What does the book suggest about how these communities fit into Canada as a nation?

8. Jesse describes his ancestors as the “forgotten people.” In what ways is he a “forgotten” person? How is his personal history and familial history forgotten? What mechanisms, structurally and historically, are in place to make a people forgotten, and how do they configure here? What other communities might be considered forgotten?

9. Consider when Priest tells Jesse that all convicts are “broken-hearted people hurt by life” and that it’s all just “love gone bad.” How is this true for Jesse? What in his life had broken his heart? How has love gone bad for him?

10. Consider how many help Jesse in his life, despite his issues. What does that suggest about humanity? How does their goodwill help him? Are their ways in which it hurts him? How are these acts inevitably complicated and fraught?

11. What role does identity, as well as its implications and roots, play in this memoir? How does Jesse’s identity change throughout? How does his understanding of who he is change? What impact did not understanding his identity have on him?

12. In Jesse’s dedication, he names several ways that Indigenous communities were affected by Canadian policies and colonial strategies. For instance, he discusses the Sixties Scoop, residential schools, and, in the body of the memoir, land wars and treaties. How does he make the connection between these policies and his own personal struggles? 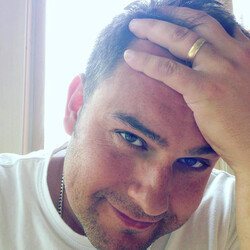 Jesse Thistle is Métis-Cree, from Prince Albert, Saskatchewan, and an assistant professor in Humanities at York University in Toronto. From the Ashes was the top-selling Canadian book in 2020, the winner of the Kobo Emerging Writer Prize for Nonfiction, Indigenous Voices Award, and High Plains Book Award, and also a finalist for CBC Canada Reads. Jesse won a Governor General’s Academic Medal in 2016, and is a Pierre Elliot Trudeau Foundation Scholar and a Vanier Scholar. A frequent keynote speaker, he lives in Hamilton, Ontario, with his wife, Lucie, and is at work on multiple projects, including his next book. Visit him at JesseThistle.com.

"An illuminating, inside account of homelessness, a study of survival and freedom...I found myselfing gasping out loud at parts, unable to put the book down. Jesse's story shows us that there is nothing that cannot be transformed." —Amanda Lindhout, bestselling co-author of A House in the Sky

"Blown away by From the Ashes. An eloquent memoir of Métis life and surviving the streets by con-turned-scholar Jesse Thistle." —Emma Donoghue, bestselling author of Room

"In this page-turner of a memoir—raw, honest, gripping, wrenching and inspiring—Jesse Thistle gifts us with an intimate and bracing look into the realities, traumas and triumphs of Indigenous life in today's North America." —Gabor Maté M.D., bestselling author of In The Realm of Hungry Ghosts: Close Encounters With Addiction

"From the Ashes makes a terrific contribution in that it brings to light the lived experience of Indigenous People in North America. Thistle makes an especially valuable contribution in today’s growing national conversation about the historic and systemic racism of Black, Brown and Native American peoples, the driving force behind the out-of-proportion rates of homelessness, police brutality, deficient healthcare, incarceration rates, uneven administration of justice, and inadequate education in our nation—all these issues are covered in glaring honesty and brutal truth. A must read for all Americans, but especially for educators, policy makers, and front line workers."—Dr. Sam Tsemberis, creator of Housing First, CEO of the Pathways Housing First Institute, and Clinical Associate Professor, UCLA Department of Psychiatry and Biobehavioral Sciences.

"A courageously heartfelt journey from profound self-destruction to redemption." —Kirkus

My Story of Being Indigenous, Homeless, and Finding My Way

By Jesse Thistle
PRICE MAY VARY BY RETAILER