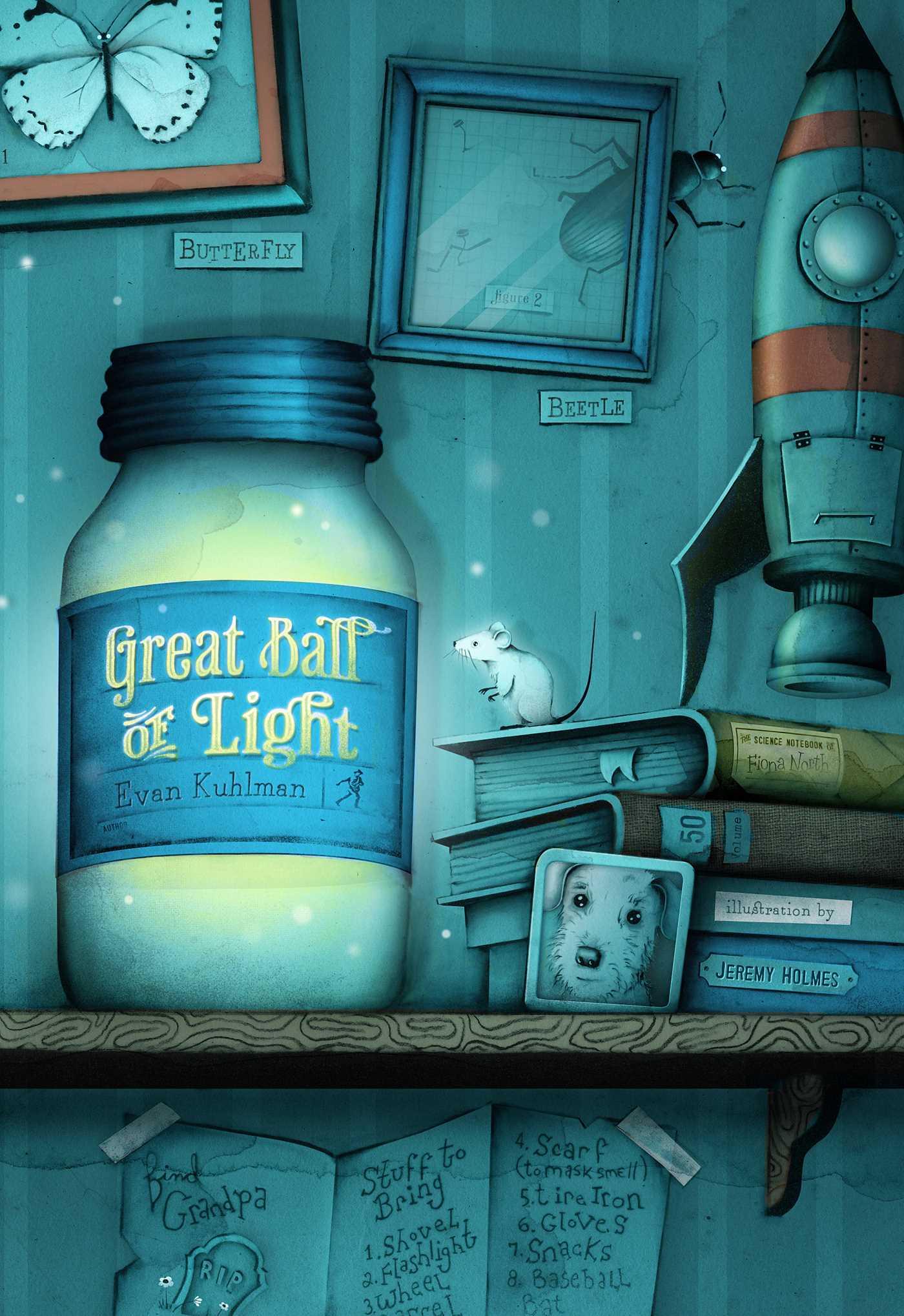 A pulsing ball of light gives two kids the astonishing ability to bring things back to life in this “eerie and hopeful” (Kirkus Reviews) and hugely fun look at what they’ll do to make their family whole again, from the author of The Last Invisible Boy.

After a lightning strike, when twin brother and sister Fenton and Fiona find a ball of light in their backyard, things get…weird. Especially when Fenton figures out it can bring things back to life. Everything from bugs, to trees, to their old dog Scruffy, to…well…people. Namely, their grandfather. Because they really do miss him, and more than that, their father and their grandfather have unsettled business to take care of. But be warned: bringing things back from the dead gets a little more complicated when they stick around.

Picture This . . .
It’s just past midnight, and my brother, Fenton, and I are pushing a wheelbarrow holding our undead grandfather, who we dug up at a cemetery a mile from our farm. There’s one of us on each handle—pushing a sort-of-dead guy is a two-kid job.

We are on a tar and gravel road, so pebbles crunch under the wheelbarrow’s wheel—maybe this will help you see it inside your head. We pass by houses and farms, some with unattended cows. Cows at night, with their dark eyes and splotchy designs, look like creatures from another planet.

Fenton and I stop pushing Grandpa Wade so we can rest.

“You’re such a girl,” my brother says to me. “I could have gone much farther before resting.” But he’s shaking blood into his arms just like I’m doing.

“And you’re such a donkey butt,” I say. I try to make a donkey sound but blow it. Mr. Ed with a bad head cold, let’s call it.

It had been cloudy all day, but when I check the sky I see stars glittering above us. We live in a small farm town, so nothing blocks our view of the sky. That night, the night Fenton and I commit grave robbery for the sake of our family, it seems like the stars are packed ten deep per square foot of sky.

“Stars,” my grandfather says, pointing at the sky with a crooked finger. He died three years ago in a car wreck, and by all rights he had given up his star-seeing privileges. But a miracle happened, and now he’s seeing stars again.

Watching Grandpa watch the stars, it hits me that I should never take anything for granted, like seeing stars fill up the sky on a warm night in May—and a hundred other things and people I love. Because one day it could all be gone, and if I’m waiting on a miracle to bring it back, I might be waiting for a very long time.

Evan Kuhlman is the author of Brother from a Box, the critically acclaimed The Last Invisible Boy, Great Ball of Light, and the highly lauded novel for adults Wolf Boy. He lives in Ohio. Visit him at AuthorEvanKuhlman.Wordpress.com.

Gr 4-6–What if you had the power to bring plants, animals, even humans back to life? Thirteen-year-old Fiona North and her twin brother Fenton are forced to confront this question when they discover a great ball of light during a storm. The pulsing, glowing light is extraordinary not just because it’s unique, but because it can bring things back to life or at least to “undeath.” The twins start with small experiments—dead insects and mice—but soon they can’t resist bringing back their dog and then their Grandpa Wade. But what do you do with an undead dog and grandpa? And what happens if the powerful ball of light ends up in the wrong hands? This science fiction story is set in rural Montana and begins with an attention-grabbing prologue, “A Handy Guide to Bringing Back the Dead (Take 1).” Fiona is a thoughtful narrator, although at times the story is held back by her slightly moralistic ramblings. Thankfully, the amusing characters, action, and humor keep the narrative engaging. Holmes’s sketchy black-and-white illustrations are dotted throughout, as though they were drawn by Fiona and taped into a journal. The dramatic ending may leave readers brimming with unanswered questions about the effects of the ball and the future of the North family. The descriptions of the undead are gross and humorous, rather than scary, making this a fun book for the younger zombie-loving set. Recommended for general purchase.–Amy Seto Musser, Denver Public Library

When a lightning strike near the dead maple tree seems to produce a ball of lightning, Fiona and her twin are certain something extraordinary is at hand.Sensible narrator Fiona North is nearly 13. At the urging of the less-cautious Fenton, she captures the ball of light in a canning jar. When the twins notice new growth on the tree, Fenton's interest at first is in fame and fortune, experimenting with various small dead creatures to determine the ability of the ball of light to restore some kind of life. The tree, impressively abundant, turns itself into a hybrid maple/apple. A beetle's missing leg temporarily regrows, yet other results are mixed. The dog is next, followed by Grandpa, whose reappearance they hope will enliven his depressed widow. Scruffy the dog and the grandfather remain partially decomposed, incomplete. Still, each thing brought back to life is changed, and not only from dead to undead. Fiona's explanation: Free will to choose the deepest self is available both in life and death. Though the family finds itself on the run after the accidental shooting death (and subsequent reanimation) of the father's fiancee, Fiona's analysis of their predicament remains optimistic. Kuhlman's voice for Fiona is both wry and earnest, the gravity of her philosophical musings balanced by un-self-conscious humor. Eerie and hopeful: family tragedy and reconciliation wrapped in a zombie encounter.

What would you do if you discovered a ball of light able to resurrect the dead? For Fiona and Fenton North, the answer is scientific experiments. First the 12-year-old twins resurrect insects and a worm, then a favorite dog, and finally their grandfather, a drunk who made their father’s life miserable but who is sorely missed by his wife, their grandmother, who has withdrawn from the world. Setting his story realistically in the present day on a farm in southern Montana and making the family’s fractured connections believable, Kuhlman also asks readers to accept a wide range of undeadness. A maple tree returns as part apple. The worm grows legs. The resurrected dog is mostly skeleton, lacking nearly all the affectionate and playful qualities he once had. Grandpa, at least, is better preserved. This faintly macabre story has plenty of humorous moments and will surely leave readers wondering about life and death and the stages in between.

This curious, haunting novel explores family redemption through lightning, zom- bies, and twelve-year-old twins who keep trying to fix everything even as it all spins out of control. It starts simply enough: Fenton, the bolder twin, grabs a mysterious ball of light, and the twins discover that it can bring dead things back to life. The kids move on fairly quickly from dead rodents and insects to the family dog, who does come back but isn’t really himself anymore. Nonetheless, Fiona and Fenton decide to bring back their grandfather, a controversial figure who in spite of his deep flaws is missed by his widow, if not his children. Grandpa is different once he revives (and, to be clear, this all falls into horrifying zombie territory with flesh falling off, exposed bones, and disgusting smells), a fact that doesn’t go unnoticed by his own son, who slowly warms to this man who was a drunken disappointment in life but seems genuinely contrite now. A startling additional death and reanimation don’t go as well, sending the family on the run; in the end, though, Fiona’s narration ends with a tentatively optimistic tone, with all undead and living people trying to use their time wisely, and the ball of lightning out of the family’s hands. The zombies and the sharp, specific discussions of the transient nature of life itself make this particularly suitable for those more intrigued than frightened by the gruesome and the fatal. For those, this is a gem of a philosophical, outlandish story, and Fiona’s narrative voice is intelligent, wry, and thoughtful.

During a lightning storm, twins Fenton and Fionaencounter a mysterious ball of light that can bring anything back to life: evenone curmudgeonly old grandpa. As readers follow the adventures and mishapsassociated with the power of resurrection, they are rewarded with humorousimagery, such as the twins wheeling their undead grandpa down the road.Sketches throughout add an additional layer to the story by mimicking Fiona'sjournal. The author has provided the twins with plenty of opportunities toreflect on tough moral issues. Some aspects of the story, though, are tooconvenient, and while Fiona's voice generally draws the reader in, at times shebecomes too preachy. The ending is consistent with the realistic tone of thestory, although too many plot elements were tied together in a short time span.Overall, this is a fun romp through the world of the undead, and young readerswill enjoy the imaginative possibilities