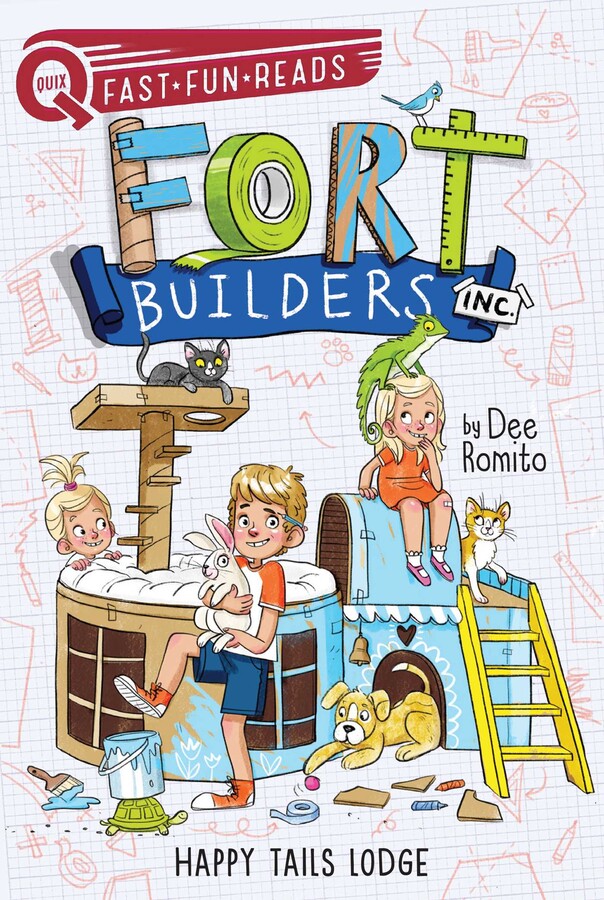 The enterprising kids of Fort Builders, Inc., are at it again. This time, the friends use their creativity and construction know-how to build a pet palace in the second story in the fun-to-read Aladdin QUIX chapter book series that’s perfect for emerging readers!

Jax and his twin sisters are getting kittens! The new four-legged members of the family will be coming home any day. And Fort Builders, Inc., has a new project…pet forts! Together, they know they can come up with the purr-fect hangout for the tiny felines. But they hit a major snag in their testing phase. None of the forts they test out is quite right. Can the team manage to build the best pet palace imaginable in time for the kittens’ arrival?

His twin sisters were even louder than usual.

He went to see what they were so excited about.

“Mommy said we can get a pet!” said Amber.

“And Daddy said we could get a pet too!” said Dove.

Jax laughed. “You know it doesn’t work that way, right? That still only means one pet.”

The girls didn’t pay any attention to him. They ran through the kitchen screaming about the two pets they were getting.

Jax followed them into the backyard.

“Are we really getting a pet?” he asked his parents.

“Yes, we are,” said Mrs. Crawford with a smile. “We decided you’re all old enough to help take care of one.”

“The girls want a kitten,” said Mr. Crawford. “What do you think?”

Jax pictured running around the backyard with a dog. But a kitten would be great too.

“Your sisters are very excited to name it,” said his mom. “I hope that’s okay.”

“Sure,” said Jax. Although he was a little disappointed that they didn’t ask him. They’d never had a pet before. It was kind of a big deal.

“Of course. Say hello to his mom for me,” said Mrs. Crawford.

Caleb Rivers was Jax’s best friend. He lived just two houses away. It didn’t take long to get there.

Caleb was sitting on the steps in his garage, tying his sneaker.

“Hey, Jax. I was heading to your house.”

Caleb had a houseful of animals. Two dogs, three cats, a bunny, a hamster, and five fish. Although the number of fish was always changing.

“Kittens are the best,” said Caleb. “But they’ll get into all kinds of stuff.”

The twins were always causing some kind of trouble.

“If your sisters climb up the curtains, knock things over, and chase each other around the house,” said Caleb.

“Yeah, I guess like your sisters, then,” Caleb confirmed.

Just then, their friends Kiara Pal and Eddie Bell rode up the driveway on their bikes.

A few weeks ago, they had all started a fort building company together: Fort Builders Inc. Whenever Kiara was visiting her grandmother down the street, they had an official meeting.

“What are you guys talking about?” asked Kiara.

“We’re getting a kitten,” said Jax.

“I have a really good kitten treat recipe,” added Eddie. “I can bake you some.”

Everything Eddie baked was delicious. Probably even cat treats!

“That would be great,” said Jax.

“Are you excited?” asked Kiara.

“Of course. I just feel a little left out,” said Jax. “The girls get to name it, and I’m sure it’ll sleep in their room. I’ll probably get stuck changing the litter box.”

“You could be in charge of brushing it,” said Caleb. “Especially if you get a long-haired cat.”

“You can pick out the toys,” said Eddie.

They were great ideas. But they weren’t big ideas.

“Thanks, but I’ll think of something,” said Jax. “Let’s start the meeting.”

Jax knew he’d figure it out. There’s always a solution if you look hard enough. But it was time to focus on Fort Builders.

Kiara and Eddie got off their bikes and hooked their helmets onto the handlebars.

Caleb stood up. “The Fort Builders Inc., team is all here. I call this meeting to order.” 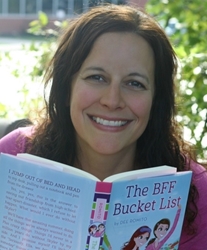 Dee Romito is an author and former elementary school teacher. Her middle grade books include The BFF Bucket List, No Place Like Home, Postcards from Venice, and coauthored Best. Night. Ever. Her debut picture book, Pies from Nowhere: How Georgia Gilmore Sustained the Montgomery Bus Boycott received a starred review from Booklist. She blogs about writing at WriteforApples.com and is co-advisor of Buffalo-Niagara Children’s Writers and Illustrators. While she does her best to be a grown-up most of the time, giggling with her BFFs is still one of her all-time favorite things. You can visit her website at DeeRomito.com.

Marta Dlugolecka (a.k.a. Marta Kissi) is a freelance illustrator living and working in London. She studied illustration and animation at Kingston University and then completed her MA at the Royal College of Art. Since, Marta has been working on various children book projects as well as covers and editorial pieces for both children and adults. In her work she likes mixing her love for crafts and model making with a little bit of digital magic, with hope to create images that are both fun and emotional.