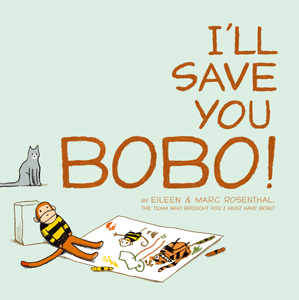 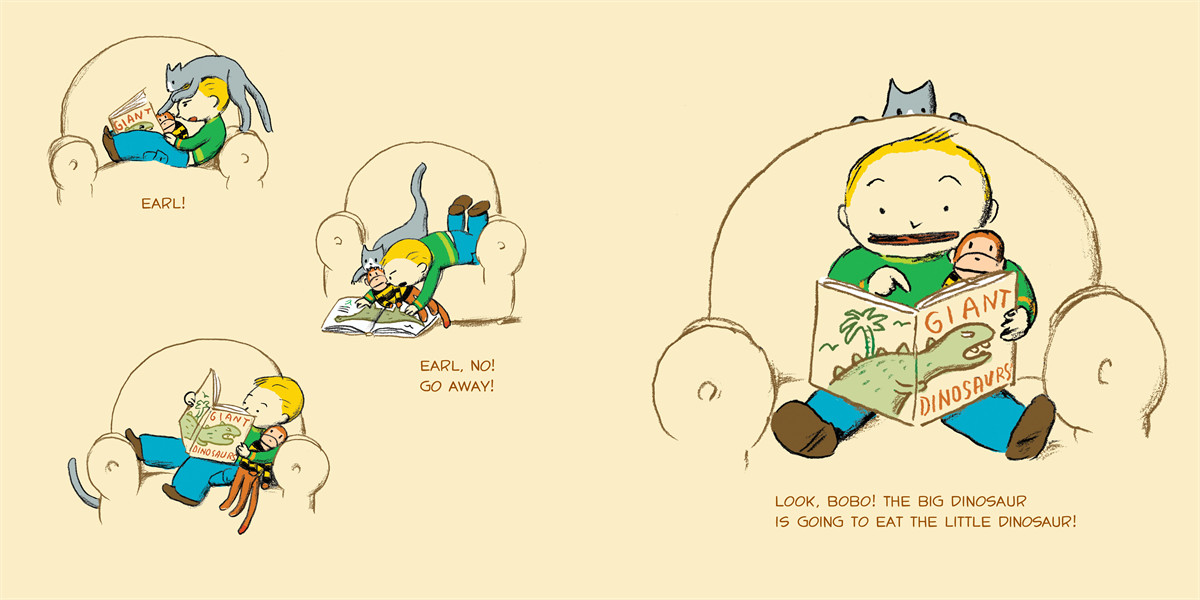 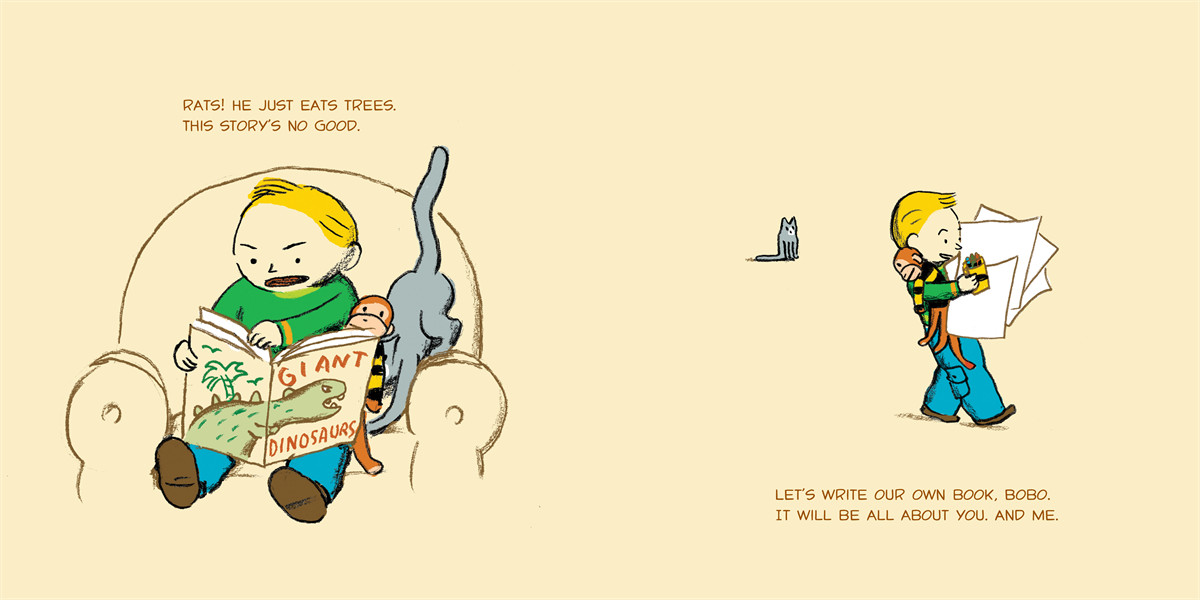 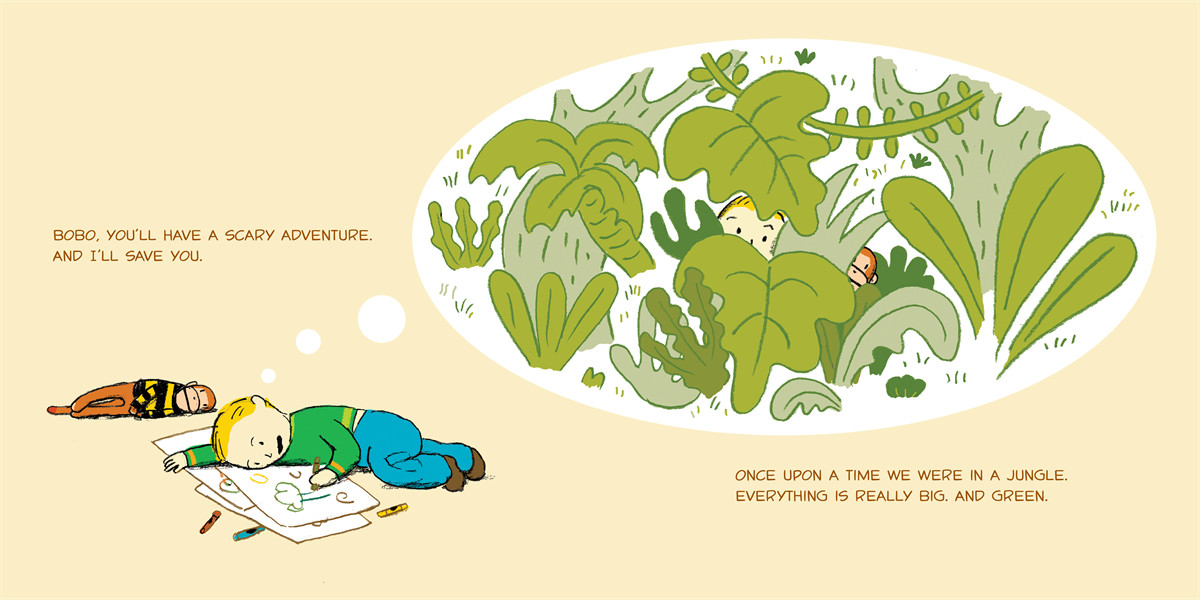 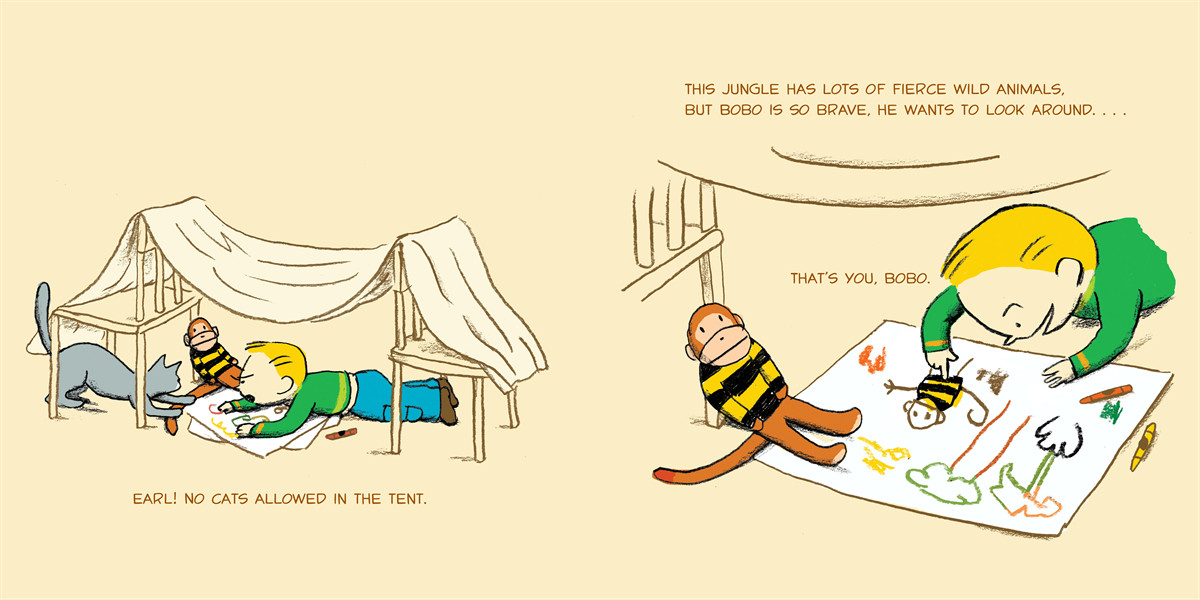 I'll Save You Bobo!

The irresistible stars of I Must Have Bobo! return in another everyday adventure in domestic disharmony!

But sometimes it only takes a small thing to realize that even sworn enemies have something in common. For instance: Bobo and Earl both have very snakey tails! Is that a truce? Don’t count on it. 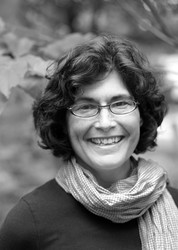 Eileen Rosenthal and her husband, Marc Rosenthal, enjoy working together (and even sharing)—unlike Willy and Earl. I Must Have Bobo! was their first collaborative project and Eileen’s picture book debut. Marc is also the illustrator of Alison McGhee’s Making a Friend. Eileen and Marc live with their family in the Berkshires. 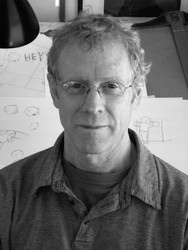 Marc Rosenthal is the New York Times bestselling illustrator of many books for children, including Small Walt by Elizabeth Verdick; the Bobo series by Eileen Rosenthal; The Straight Line Wonder by Mem Fox; and Phooey!, which he wrote. Marc’s illustrations can be seen regularly in The New Yorker, Time, Forbes, Fortune, The Atlantic, The New York Times, The Boston Globe, The Washington Post, and others. Visit him online at Marc-Rosenthal.com.

* "The war wages on! In this charming sequel to I Must Have Bobo! (2010), Willy and his pet cat, Earl, are still having trouble coexisting at home, and stuffed monkey Bobo is caught in the middle. All three characters fully inhabit their identities. Willy is emphatic and mercurial, excited about the jungle adventure he’s drawing (“And we have a tent!” he shouts gleefully) and irritated at Earl’s intrusions. Earl does as cats do, sometimes insisting on being in the middle of the action, at other times drifting into the background or tentatively exploring what Willy is up to. Bobo, inanimate, is just along for the ride. A joyful tribute to imagination and everyday domestic dramas."

* "Poor Willy just wants to read a dinosaur book with his beloved toy monkey. But, as in I MUST Have Bobo (Atheneum, 2011), Earl the cat just won’t leave them alone. When the book proves disappointingly sedate, Willy takes matters into his own hands and decides to write his own jungle adventure–with lots of danger to save Bobo from. As he narrates their imaginary exploits, Earl pesters and tries to steal the toy. With clever problem-solving, Willy uses his story to express his anger and desire for retaliation against Earl. Imagining the feline being devoured by snakes provides catharsis for Willy, and though their relationship remains the same he feels empowered enough to accept Earl as he is. There is no pat ending. Kids will relate to having someone in their life who just plain bugs them–whether pet, sibling, cousin, or friend. The charming humor in the Sunday-funnies-style illustrations perfectly enhances the story, and the art (not to mention Willy’s feisty personality) is reminiscent of Bill Watterson’s “Calvin and Hobbes” (Andrews McMeel). A first purchase."

"I’ll Save You Bobo!, written by Eileen Rosenthal and illustrated by her husband, Marc Rosenthal, is the stand-alone sequel to I Must Have Bobo! in which the same three characters—Willy, a boy who looks as if he could be a cousin of Ludwig Bemelman’s Madeline, with his big round head and primary-colored outfits; Bobo the stuffed monkey; and Earl the mischievous cat—act out the drama of trying to live peaceably under one roof. In both books, Willy must fend off Earl and his furtive efforts to snatch the monkey. In “I’ll Save You Bobo!” Willy wrestles with his emotions, particularly his rage at Earl, by writing books about the three of them getting trapped in a jungle with poisonous mushrooms, menacing tigers and an enormous green snake that in the end eats guess-who for dinner? Yes, Earl. The story sets the world right for Willy—that is, until Earl absconds with Bobo again in real life."
--The New York Times Book Review

"Earl the cat, Bobo the stuffed monkey, and Willy the towheaded boy are back. Last time out (I Must Have Bobo!, 2011), Bobo was lost. Now he is in peril, as Willy writes a jungle tale with Bobo as the reluctant hero. Throughout, Earl desperately tries to get their attention by doing everything from jumping on Willy’s head to infiltrating (and ruining) the tent Willy has constructed. A clever ending finally makes Willy sit up and take notice. The deceptively simple artwork is layered for fun and works in tandem with the deadpan text. This is one that’s enjoyable for both readers and listeners."

I'll Save You Bobo!