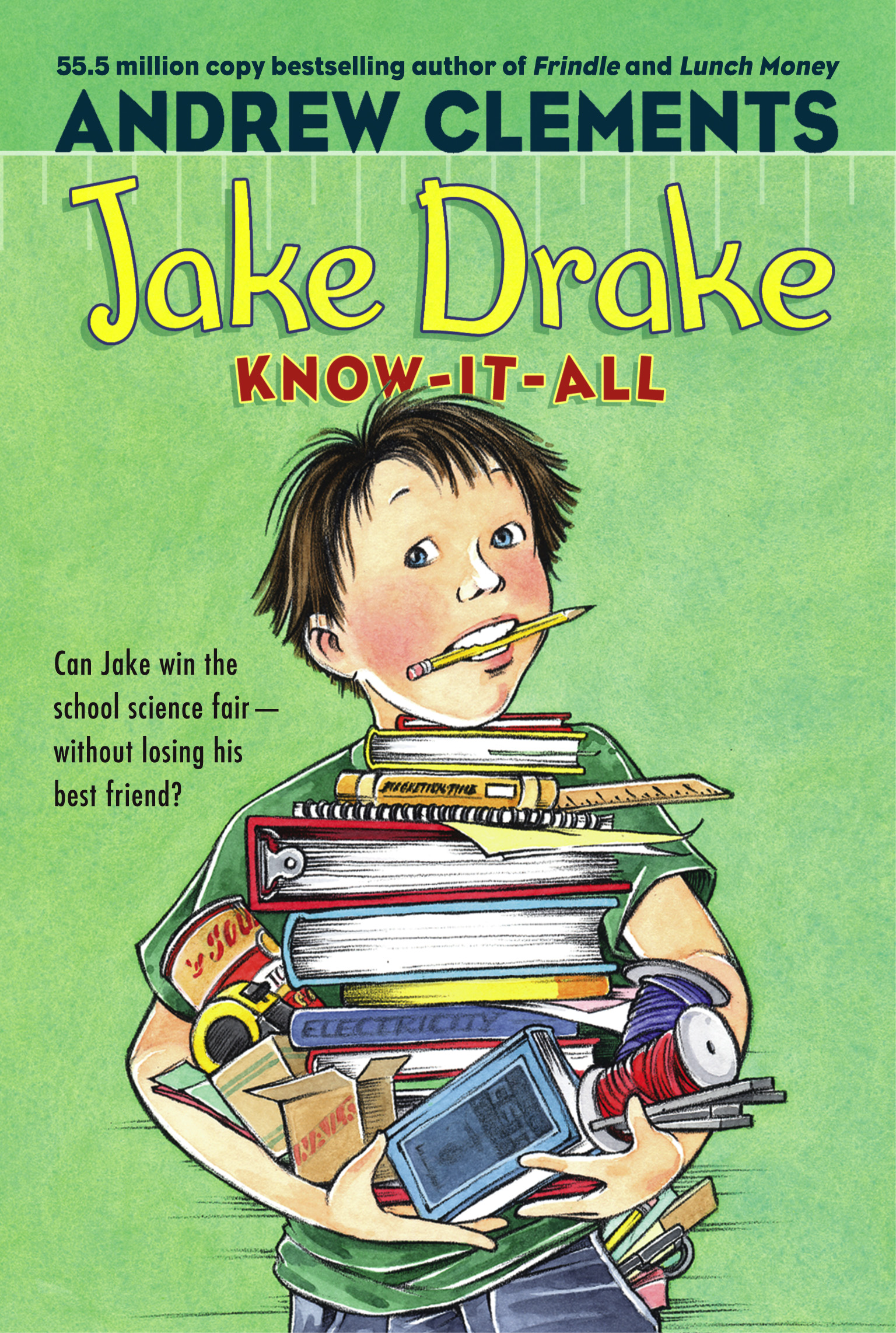 Jake Drake is excited about Despres Elementary School's first science fair. He wants to win the grand prize: a brand-new Hyper-Cross-Functional Bluntium Twelve computer system. And he really wants to beat the third-grade know-it-alls, Marsha McCall and Kevin Young.
The trouble is, to beat the know-it-alls, Jake has to become a know-it-all himself. And he may just lose more than he wins.

Chapter One: The Catch

I'm Jake, Jake Drake. I'm in fourth grade, and I'm ten years old. And I have to tell the truth about something: I've been crazy about computers all my life.

My first computer was an old Mac Classic with a black-and-white screen. I got to play Reader Rabbit and Magic Math. I got to draw pictures on the screen, and I played Battle Tanks. And that was before I could even read.

Then our family got a Mac with a big color monitor. And I got to play Tetris and Shanghai and Solitaire and Spectre. Then I got a joystick for Christmas when I was four, and so did my best friend, Willie. Whenever Willie came to my house we played computer games together. It's not we like played computers all the time, because my mom made a one-hour-a-day rule at my house. But Willie and I filled up that hour almost every day.

Then the computers started getting superfast, and I started messing around with Virtual Drummer, and then SimCity, and SimAnt, and PGA Golf, and about ten other games. And then the Internet arrived at my house, and all of a sudden I could make my computer do some pretty amazing stuff. It was like a magic window.

I'm telling all of this because if I don't, then the rest of this story makes me look like a real jerk. And I'm not a jerk, not most of the time. I just really like computers.

When I started kindergarten, there was a computer in our room. When the teacher saw I was good on it, I got to use it. I even got to teach other kids how to use it. Except for Kevin and Marsha. They didn't want me to tell them about computers or anything else.

Like I said before, I'm ten now, so I've had some time to figure out some stuff. And one thing I know for sure is this: There's nothing worse than a know-it-all.

But some kids, they have to prove they're smart. Like, all the time. And not just smart. They have to be the smartest. And that's what Marsha and Kevin are like.

Marsha McCall and Kevin Young were nice enough kids back in kindergartenas long as I didn't try to tell them anything about the computer. Because when I tried to show Kevin how to make shapes with the drawing program, he said, "I know that." But I don't think he really did. And when I tried to show Marsha how to print out a picture of a kitten, she said, "I can do that myself."

But a lot of the time Kevin and Marsha were pretty nice because kindergarten was mostly playtime.

But when we got to first grade, school changed. All of a sudden there were right answers and wrong answers. And Kevin and Marsha, they went nuts about getting the right answers.

Our first-grade teacher was Miss Grimes. Every time she asked a question, Marsha would start shaking all over and waving her hand around and whispering really loud, like this: "Ooh, ooh! I know! I know! I know!"

And while Marsha was going, "Ooh, ooh," Kevin looked like his arm was going to pull his whole body right out of his chair and drag it up to the ceiling, like his arm had its own brain or something.

It was pretty awful. But Miss Grimes, she liked it when Kevin and Marsha tried to be the best at everything. She liked seeing who could get done first with a math problem. She liked letting everyone with a hundred on a spelling quiz line up first for lunch or recess. First grade felt like a big contest, and Miss Grimes smiled at the winners and frowned at the losers.

When she asked the class a question, most of the time Miss Grimes called on Marsha first. If Marsha was slow or didn't know something, then Kevin got a turn. If Kevin messed up, then she would call on someone else.

And I think I know why Miss Grimes always called on Marsha and Kevin. I think it's because she's kind of a know-it-all herself. I bet she was just like Marsha back when she was in first grade.

Second grade wasn't much better. The only good thing was that my second-grade teacher wasn't like Miss Grimes. Mrs. Brattle didn't want school to be a big contest. So she hardly ever called on the know-it-alls.

All year long, Mrs. Brattle kept saying stuff like, "Kevin and Marsha, please look around at all the other students in this class. They have good ideas, too. Just put your hands down for now."

That didn't stop Kevin and Marsha. The "ooh-oohing" and the arm waving never let up.

But last year, when I was in third grade, that's when things got out of control. And I guess it was partly my fault.

And Mrs. Snavin, my third-grade teacher? She had something to do with it. And so did the principal, Mrs. Karp.

And so did this guy named Mr. Lenny Cordo over at Wonky's Super Computer Store. He had a lot to do with it.

And this was the catch: Before Mr. Lenny Cordo could give me this wonderful thing that I wanted so much, I would have to do something.

I would have to turn myself into Jake Drake, Know-It-All.

"A cut above the usual beginning chapter book."