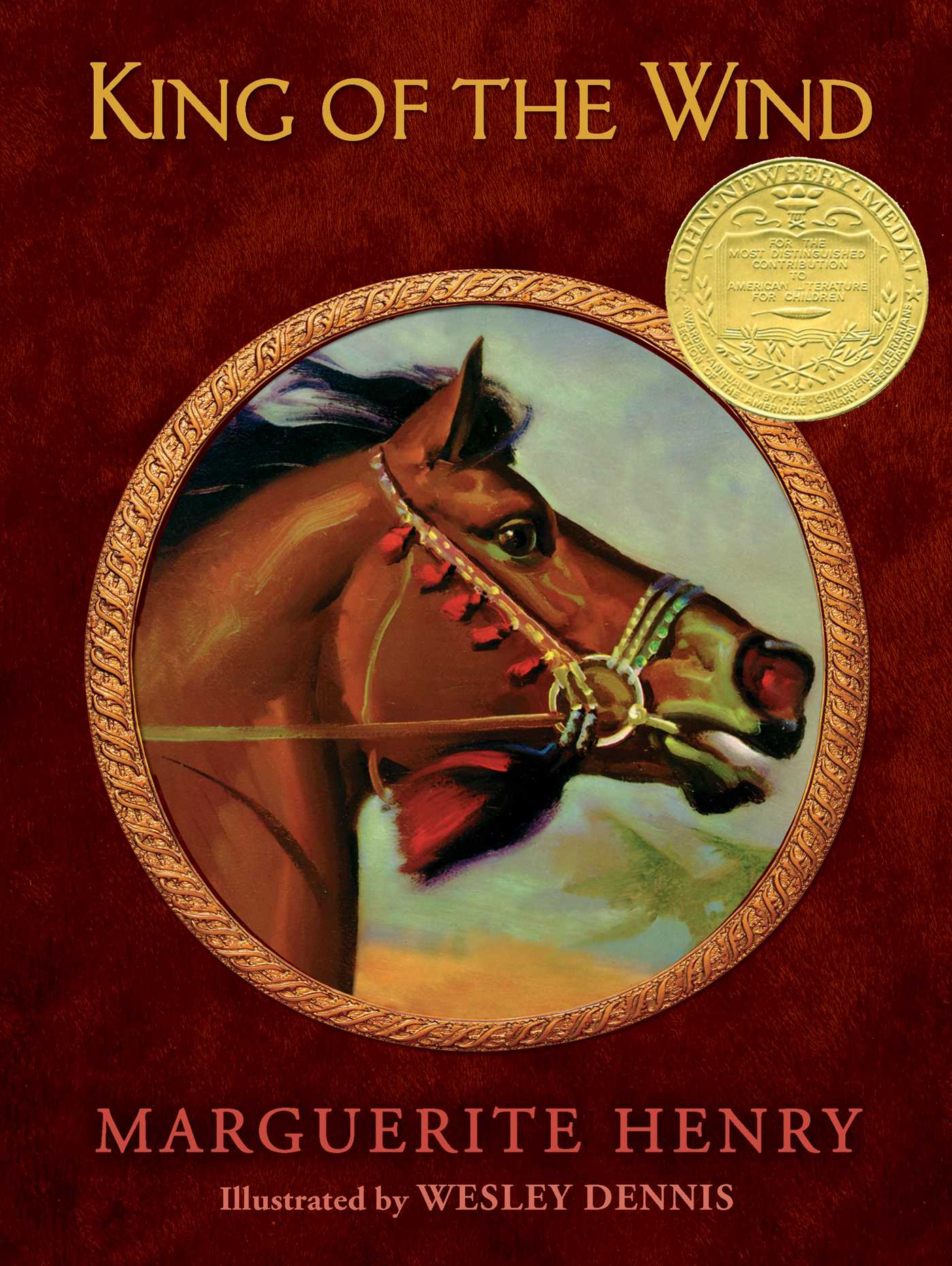 The Story of the Godolphin Arabian

The legendary history of thoroughbred heritage is artfully depicted alongside a tale of remarkable friendship between a boy and his horse in this classic story that won the Newbery Medal, now in a gorgeous hardcover gift edition.

He was named “Sham” for the sun, this golden-red stallion born in the Sultan of Morocco’s stone stables. Upon his heel was a small white spot, the symbol of speed. But on his chest was the symbol of misfortune. Although he was swift as the desert winds, Sham’s pedigree would be scorned all his life by cruel masters and owners.

This is the classic story of Sham and his friend, the stable boy Agba. Their adventures take them from the sands of the Sahara to the royal courts of France, and finally to the green pastures and stately homes of England. For Sham was the renowned Godolphin Arabian, whose blood flows through the veins of almost every superior thoroughbred. Sham’s speed—like his story—has become legendary.

1. The Fast of Ramadan
IN THE northwestern slice of Africa known as Morocco, a horseboy stood, with broom in hand, in the vast courtyard of the royal stables of the Sultan. He was waiting for dusk to fall.

All day long he had eaten nothing. He had not even tasted the jujubes tucked in his turban nor the enormous purple grapes that spilled over the palace wall into the stable yard. He had tried not to sniff the rich, warm fragrance of ripening pomegranates. For this was the sacred month of Ramadan when, day after day, all faithful Mohammedans neither eat nor drink from the dawn before sunrise until the moment after sunset.

The boy Agba had not minded the fast for himself. It was part of his religion. But when Signor Achmet, Chief of the Grooms, commanded that the horses, too, observe the fast, Agba’s dark eyes smouldered with anger.

“ It is the order of the Sultan! ” the Signor had announced to the horseboys. And he had cuffed Agba on the head when the boy showed his disapproval.

Of the twelve thousand horses in the Sultan’s stables, Agba had charge of ten. He fed and watered them and polished their coats and cleaned their stalls. Best of all, he wheeled the whole string into the courtyard at one time for their exercise.

There was one of the ten horses to whom Agba had lost his heart. She was a bay mare, as fleet as a gazelle, with eyes that studied him in whatever he did. The other nine horses he would lead out to the common water trough to drink. But for his bright bay he would fill a water cask from a pure spring beyond the palace gates. Then he would hold it while the mare sucked the water, her eyelashes brushing his fingers as she drank. For long moments after she had drunk her fill, she would gaze at him while the cool water dribbled from her muzzle onto his hands.

It was the mare that worried Agba now as he worked to fill in the time until the hour of sunset. The courtyard was already swept clean but Agba pushed his palm-leaf broom as if he were sweeping all his thoughts into a little mound for the wind to carry away.

At last he hung his broom on an iron hook, alongside an endless row of brooms, and went to the mare. Her stall door was closed so that the fragrance of late clover would not drift in to prick her appetite. He found her asleep, lying on her side, her great belly distended by the little colt soon to be born. Agba noticed, with a heavy feeling in his chest, that the fast was telling on the mare. He could read it in the sunken places above each eye, in the harshness of her coat.

But soon the fast would be over. It was the last day of the month, and even now the sun was sinking below the gray-green olive trees that fringed the courtyard.

There was no sound anywhere, not from the palace walls beyond, nor from the quarters over the stables where the horseboys lived. The whole world seemed to be holding its breath, waiting for dusk to fall. Small voices of insects and birds were beginning to pierce the quiet. Twilight toads piping on their bassoons. Crickets chirping. Wood doves cooing. And afar off in the Atlas Mountains a hyena began to laugh. These were forerunners of the darkness. It would be only a short time now.

Agba turned toward the east, his eyes on the minaret of the mosque. It was a sharp needle pricking the blood-red reflection of the sun. He gazed fixedly at it until his eyes smarted. At last a figure in white robes emerged from the tower. It was the public crier. He was sounding his trumpet. He was crying four times to the four winds of heaven. The fast of Ramadan was at an end!

The air went wild with noise. Twelve thousand horses recognized the summons and neighed their hunger. The royal stables seethed like an ant hill. Horseboys swarmed out of the corridors and into the courtyard. From the hoods of their cloaks, from waistbands and vests, they took dates and raisins and almonds and popped them noisily into their mouths. They stripped the grapes from their vines. They ate with boisterous abandon. Some plunged their faces into the troughs and sucked the water as if they were horses.

Agba did not join the other horseboys. He returned to the mare. Moving slowly so as not to frighten her, he reached under the saddle hung on the wall and found the water vessel he had filled and hidden there an hour ago. He poured the water into a basin and waited for the mare to awaken.

As if she had heard in her dreams the sound made by the water, she woke with a jerk and struggled to her feet. She came to Agba and drank. Then she raised her head, letting the water slobber from her lips.

Agba waited motionless, knowing she would want more and more. Her deep brown eyes studied him as if to say, “You are the source of all that is good.”

A great happiness welled up inside Agba. He nodded, seeming to understand her thoughts, then waited while she drank again and again.

When Agba came out of the mare’s stall, the other boys were beginning to lead their horses to the common trough to drink. He must hurry now if he hoped to get his corn ration first. He picked up a bag made of hemp and ran through a maze of corridors and down a steep staircase to the underground granary. At the entrance stood Signor Achmet, Chief of the Grooms. Signor Achmet was dark and bearded. In his right hand he carried a knotted stick, and from the sash at his waist hung a hundred keys. When he saw Agba, he gripped the boy’s shoulder with fingers as strong as the claws of an eagle.

“Why do you not eat with the other slaveboys? ” he asked in his cracked voice. Then with a sharp look he released Agba and began peeling an orange with his fingernails. His beady eyes did not leave Agba’s face as he ate the orange, making loud sucking noises to show how juicy and good it was.

The boy’s eyes flew to the Signor’s.

“Is tonight her hour?”

“Tonight, then,” the Signor said, as he wiped his mouth on his mantle and began fumbling for the key to the granary, “tonight you will not go to your quarters to sleep. You will move the mare into the brood-mare stable. You will remain on watch and call me when she is ready to foal. The all-seeing eye of Allah will be upon you.”

Agba’s heart fluttered like bird wings. The Chief of the Grooms was letting him stay with his mare! He forgot all the cuffs and sharp words. He bowed low, impatient to hear the sound of the key turning the great lock, impatient for the creaking of the door and the mingled odors of corn and barley.

The key scraped. The door creaked open. The warm, mellow smells leaked out.

Signor Achmet stood aside. Agba slipped past him into the darkness. Quickly his sensitive fingers sought the good, sound ears of corn. He filled his bag with them. Then he turned and fled up the stairs.
Marguerite Henry

The Story of the Godolphin Arabian