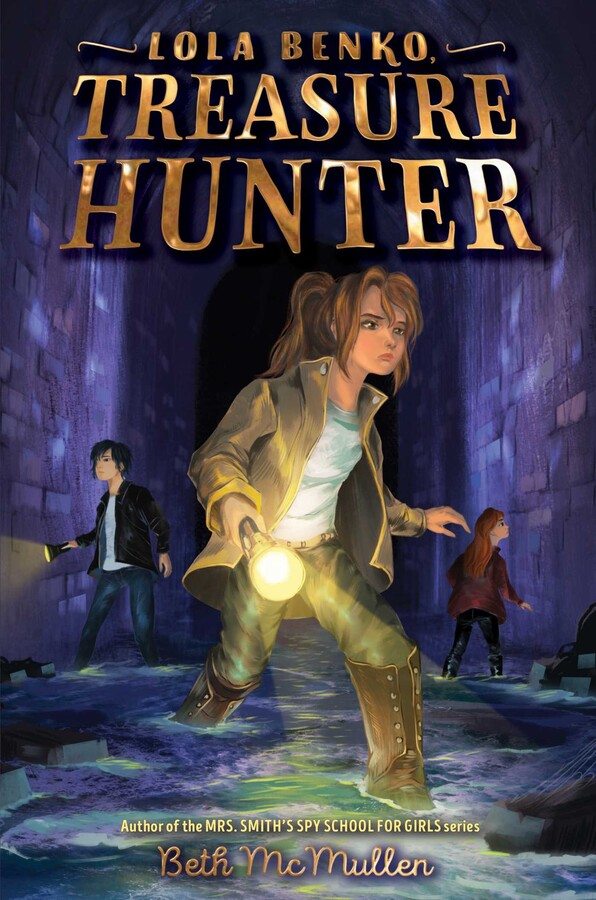 Indiana Jones meets The Lost Property Office in this action-packed mystery about a young girl searching for her father from the author of Mrs. Smith’s Spy School for Girls—the first in a new series!

Having a world-traversing archaeologist dad means twelve-year-old Lola Benko is used to moving around and not putting down roots anywhere. But every day and every hunt for something hidden is an adventure, and no matter what, she and her dad are an unbeatable team.

Then her father disappears. The official story is that he was caught in a flash flood, but Lola’s research shows the day in question was perfectly pleasant. And it will take more than empty reassurances from suspect strangers for Lola to give up on her dad. She has a feeling his disappearance has to do with a mythical stone he was studying—a stone so powerful, it could control the world. But in the wrong hands, it could end it, too...

With the help of some new friends at her school, it’s up to Lola to go on the most important hunt of her life.

Chapter 1: Eight Months Ago—Prague, Czech Republic CHAPTER 1 EIGHT MONTHS AGO—PRAGUE, CZECH REPUBLIC
FROM THE OUTSIDE, MY LIFE probably looks pretty good. I travel around the world with my archaeologist father searching for lost things. Not like misplaced keys or that library book you swear you returned. No, Professor Lawrence Benko is a treasure hunter. You know, Montezuma’s gold or the plunder of the dreaded pirate Blackbeard. That kind of stuff. Last year we spent four months searching for the priceless Sword of Honjo Masamune, lost during World War II. The search turned out to be a wild-goose chase and a total bust. But every once in a while, the esteemed professor finds what he’s looking for. That’s when you read about him in the news or see him on television.

So what is traipsing around the world after my dad really like? Well, at twelve years old, I live out of a suitcase and have extra pages stapled into my passport because I used up the regular ones. I’ve been on all the continents except for Antarctica, and that is only because there are not many treasures buried in the ice. I’ve been to eleven schools in seven years, which means I know kids all over the world, but I have no real friends because who wants a friend who just ups and leaves at the drop of a hat? I learned to read on a boat traveling down the Mekong Delta and to divide fractions on an archaeological dig in Mali.

Dad says I’m a tinkerer. My current specialty is whirligig wind spinners made from tin cans, wire, and springs. The tinkering comes from having lots of idle time moving from place to place. When my father is in hot pursuit of some missing thing or another and 100 percent focused on his work, I am responsible for entertaining myself. I’m good at being alone. I barely even notice it. Not much, anyway.

For instance, right now I’m parked in a small dusty apartment that has been our home for thirteen hours. We came from Estonia and before that Bucharest. Or Istanbul? I can’t remember. It all runs together. I’m staring out the window at two kids with backpacks down on the sidewalk. They are probably on their way to school. I notice them because one is laughing so hard at what the other just said, she doubles over to catch her breath. But I’m definitely not wondering what it would be like to have a friend who laughed at my jokes like that. No. I’m looking at the library across the street, so ornate and fancy it could be a royal palace. That’s what I’m doing.

This morning, Dad took off to meet the archivist before the sun was even up, something urgent about old records and fairy tales. He left a note reminding me to do my homework before getting distracted by other projects. And while I appreciate his effort, this new whirligig I’m building is made from Coke cans and sparkles like a disco ball. It is much more interesting than equations or vocabulary lists. Also, when Dad goes into an archive or a library, he doesn’t leave until they kick him out, which means I have plenty of time to do my homework before he gets back.

Except it turns out I don’t. It’s not even lunchtime when Dad crashes through the apartment’s front door, hair wild and arms helicoptering. He’s acting like he just got electrocuted. For the record, Dad and I look nothing alike. He’s tall and lanky with silver hair and I’m short and solid with frizzy brown hair. His eyes are green like a cat and mine are brown like a mud puddle. Except Dad says they are flecked with gold and beautiful. Whatever.

“Lola!” Dad shouts, his eyes frantic. “Things have just taken a turn for the extraordinary!”

“They have?” I’m about to cut an important piece of Coke can, but I pause. When Dad is excited, the best solution is to wait him out. It never lasts more than three or four minutes. I put down my tin snips.

“Indeed.” He’s breathless, gulping at the air. “Places to go, people to see, things to do. Come on. Pack up. Time to move.”

“But we just got here.” This is a quick change of direction, even for us.

He waves me off. “I know. I know. But things are happening. Stupendous things. Unbelievable things.”

Boy, he’s really excited. “Stupendous” isn’t an everyday word for Dad. “What are they?” I demand.

His expression falls flat. “I can’t tell you.” Great. Sometimes I can’t get him to shut up about whatever artifact he’s after and other times he’s silent as the grave. Is it too much to ask for a happy medium?

“Then you shouldn’t taunt me with ‘stupendous’ and ‘unbelievable,’?” I grumble.

Dad takes me by the shoulders. “I share your sorrow that we cannot stay longer in beautiful Prague, but I must take the tiger by the tail on this one. It requires a full-court press.” Dad loves a good idiom, but I’m still annoyed. Clearly he doesn’t care, as he spins around the apartment, picking up the few things we’ve managed to unpack and hurling them into our bags. It occurs to me Dad has not asked about my homework and that is always his first question. Something strange is definitely going on.

“Fine. But I need an hour to take this apart.” I point at the half-constructed whirligig. It’s my most ambitious creation yet, and there is no way I’m going to mess it up because Dad is having some sort of unexplained meltdown. “Where are we going anyway?”

Dad eyes the three-foot whirligig with suspicion, as if seeing it for the first time. “Well, I’m headed to Budapest. But you are going to San Francisco.”

I drop a coil of wire. “Excuse me? San Francisco?” Not that I don’t like San Francisco. I love it there. I stay with Great-Aunt Irma, who is the best, and her companion gray parrot, Zeus, who’s the best at being trouble. Irma always has three flavors of ice cream in the freezer and never nags me to brush my hair, although once Zeus tried to make a nest in there and I knew enough to take the hint. But the point is, Dad is dropping me like a hot potato. “Why?”

Dad flashes a pained expression. “Just for a few months.”

“Weeks? Is that better? I can’t say for sure, but it’s a necessary precaution,” he explains. “It might not be safe.”

“Perhaps that’s the wrong word? Well, in any case, not to worry. Everything is fine. It’s just Irma would dearly love to see you and I figured now that it’s almost summer, it would be a good time. Plus, I have things to do. They won’t be fun for you. Very boring. Dull. Boring and dull.”

“You said not safe.”

“You misheard me. And the whirligig will have to stay.”

I’m pretty good at being spontaneous. I mean, really. Look at me. But even I have my limits. “No. Way.”

“You can’t fly with it. It’s very… weird.” When I scowl at him, he retreats. “You know what I mean. They are picky about what you can bring on airplanes these days.”

“I refuse.” I cross my arms against my chest defensively.

Dad’s jaw tightens. In his head, he’s reeling through strategies to get me to comply with his wishes. It won’t work. He might as well give up now and save himself the time. I grimace, just in case my point is somehow unclear.

After glancing at his watch, he throws his hands up in the air. “Fine! I’ll ship it to you.”

I narrow my gaze. “You promise?”

“I don’t know what that is,” he replies, perplexed.

“Never mind, a regular swear is fine, I guess. Just don’t mess this up.”

Dad looks at me, but really he’s looking beyond me, seeing something in his mind’s eye. A memory maybe or something to come. Whatever it is, it haunts him. “In this situation,” he says gravely, “messing up is simply not an option.”

Three hours later I’m on a plane to San Francisco. 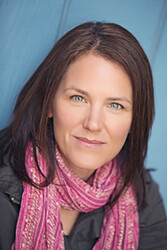 Beth McMullen is the author of the Mrs. Smith’s Spy School for Girls series; the Lola Benko, Treasure Hunter series; and several adult mysteries. Her books have heroes and bad guys, action and messy situations. An avid reader, she once missed her subway stop and rode the train all the way to Brooklyn because the book she was reading was that good. She lives in Northern California with her family and two cats. Visit her at BethMcMullenBooks.com.