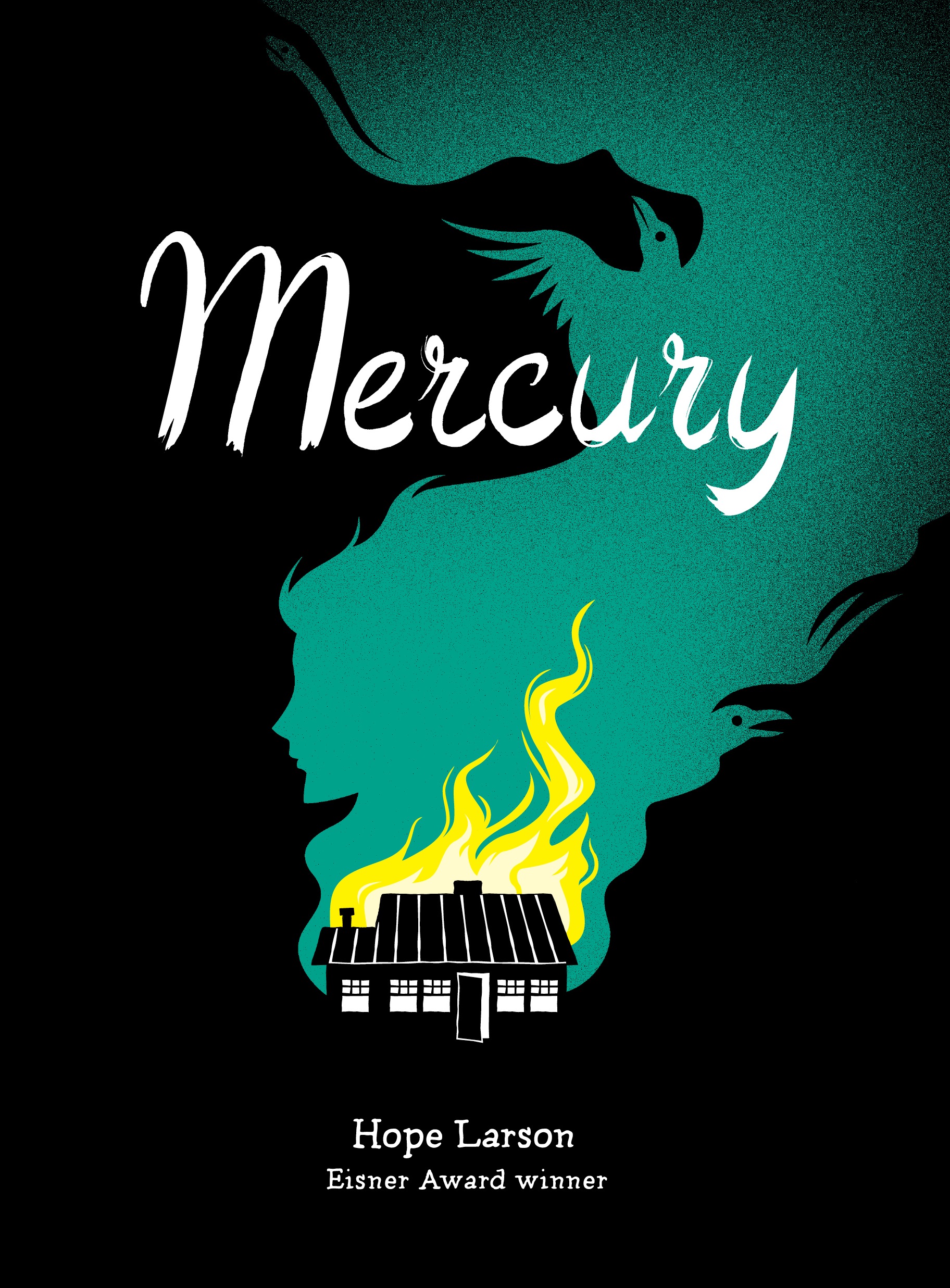 August 31, 5:15 PM, French Hill, Nova Scotia: A girl named Tara is running. She runs through her nice neighborhood and up a road to the burned ruins of what was once a beautiful house--her family's house.

August 31, 1859, French Hill, Nova Scotia: A girl named Josey is picking blackberries with her friend Connie. As the girls gossip, a handsome stranger knocks on the door of Josey's house. His name is Asa, and with his coming, Josey's life--and later in time, Tara's as well--is about to change forever.

Because there is treasure in the woods that belong to Josey's family. Gold--an untold fortune. Asa has a secret way of finding it, and his partnership with Josey's father could make them all rich. But there is darkness in the woods, and in Asa. And in the present day, Tara, Josey's descendent, is about to discover the truth about what really happened in the family's past.

Eisner award winner Hope Larson weaves together history, romance, and a touch of her trademark magical realism in this remarkable graphic novel of how the past haunts a teenage girl's present.

By clicking 'Sign me up' I acknowledge that I have read and agree to the privacy policy and terms of use. Free ebook offer available to NEW US subscribers only. Offer redeemable at Simon & Schuster's ebook fulfillment partner. Must redeem within 90 days. See full terms and conditions and this month's choices.
Mercury by Hope Larson
A Reading Group Guide

ABOUT THE BOOK
In 1859 French Hill, Nova Scotia, Josey Fraser has just met handsome Asa Curry, a man with a mysterious and traveled past. While quickly winning young Josey's heart, Asa reveals a secret ability to locate gold on the Fraser’s farm. Thrilled he has struck it rich, Asa is devastated when Josey’s father refuses to let him mine the gold. With his hopes of fortune dashed, Asa turns to desperate measures with tragic results. . . .

In the same town one hundred fifty years later, Tara Fraser is dealing with the aftermath of her house burning down, a house that has been in her family—and Josey’s—for generations. While her mother works in another city and Tara reacclimates to public high school, she discovers a pendant that turns out to be much more than a simple heirloom. As her ancestor’s mysterious past reveals itself, Tara’s story emerges with the promise of gold.

A compelling combination of history and romance, marked with Larson’s signature magical realism, Mercury is an extraordinary depiction of two girls tied by blood and separated by time.

ABOUT THE AUTHOR
Hope Larson is the author of Chiggers, Gray Horses, and Salamander Dream, which Publishers Weekly named one of 2005’s best comics. She won a 2007 Eisner Award, the highest honor for a comic artist. A graduate of the School of the Art Institute of Chicago, she wrote the script for Mercury while living in a little blue farmhouse in Hillsvale, Nova Scotia, and drew the pictures in her hometown of Asheville, North Carolina. Learn more about her at HopeLarson.com.


DISCUSSION QUESTIONS
1. Considering the gap of a hundred and fifty years between Josey’s and Tara’s lives, how are they similar in character and how do they differ? What do their actions—especially those of rebellion—say about them?

2.  Why is Josey so attracted to Asa, a man who proves himself unworthy of her affections?

3.  Compare the traumatic events in Josey’s life with those in Tara’s life. Is there something laced into their family’s lineage that causes such tragedies? Is it simply bad luck or is there something more supernatural at play?

4.  How would you characterize Tara’s relationship with her mother? How does their relationship impact the decisions each of them makes throughout the novel?

5.  To what extent does Asa have control over Josey? How does she respond to his influence? How does Asa’s death influence Tara and her family centuries later? What does this suggest about the power of good and evil forces over time?

6.  Why can’t Asa get to the gold while Tara is able to reach it in the end?

7.  In both words and images, Larson has incorporated layers of meaning in Mercury. What do these symbols mean and how do they enhance the storytelling?

8.  Who or what does the crow with a human face represent? Why does time not affect the crow?

9.  How and why do Josey’s and Tara’s romances turn out differently?

10.  What is unique about the women in the Fraser family? What unusual abilities do they possess and how does that affect the fate of their families?

11.  Why did the author select Mercury as the title of the book?

12.  Mercury is based on elements of Nova Scotian lore. What stories are tied to the place where you live?


WRITING AND RESEARCH ACTIVITIES
Ask students to work with a partner to draw a Venn diagram and to label one side “Josey and Asa” and the other side “Tara and Ben.” Have students brainstorm the similarities and differences between the two couples and their relationships. The students can present the information in a creative format such as a song or rap, a poem for two voices, a graphic drawing, or another outlet of their choice.

Tara loses everything she owns in the fire. Ask students to form groups of three or four and to research community resources available to help families who have lost everything to fires. Groups could be responsible for locating community resources for the following: clothing, food, small household items, personal toiletries, and other needs. Have students compile their research into a pamphlet to be made available through the local fire department for families who have lost homes to fires.

Ask students to select one of the major characters in the story and to keep a pictorial journal of the character’s thoughts and feelings of the events as they occur. The students may use any medium for their drawings. Upon completion, the journals should be displayed in the school library.

The author uses symbols to convey a deeper meaning in Mercury. What symbols does she use and what do they represent? How effective are the symbols in meeting their goals? Ask students to use a poster board to display the symbols used in the book; for each symbol students should write and attach one to two paragraphs explaining the symbol and responding to these questions.

The reader can make assumptions about what happens to Tara and Josey after the book’s conclusion. With a partner, students can brainstorm a list of unanswered questions and suggest probable answers. Then ask students to illustrate and write two to four pages answering the unanswered questions about Tara’s and Josey's immediate futures. Students can share their new pages with the class and post them within the classroom. 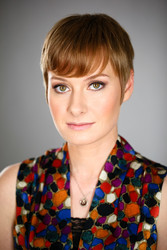 Hope Larson is the author of Who Is AC? and the author-illustrator of Mercury, Chiggers, Gray Horses, and Salamander Dream, which Publishers Weekly named one of 2005's best comics. She won a 2007 Eisner Award, the highest honor for a comic artist. She lives with her husband in Los Angeles. You can visit her at HopeLarson.com.

Hope Larson is the author of Who Is AC? and the author-illustrator of Mercury, Chiggers, Gray Horses, and Salamander Dream, which Publishers Weekly named one of 2005's best comics. She won a 2007 Eisner Award, the highest honor for a comic artist. She lives with her husband in Los Angeles. You can visit her at HopeLarson.com.

*"The beautifully rendered black-and-white drawings capture the gorgeous, magical, and mundane details of both time periods. The tales are by turns mystical, funny, suspenseful, and tender. Graphic novels make great fodder for voracious readers and offer encouragement to reluctant ones, and it is supremely satisfying to see yet another excellent girl-focused offering from Larson." --Quill & Quire, STARRED REVIEW