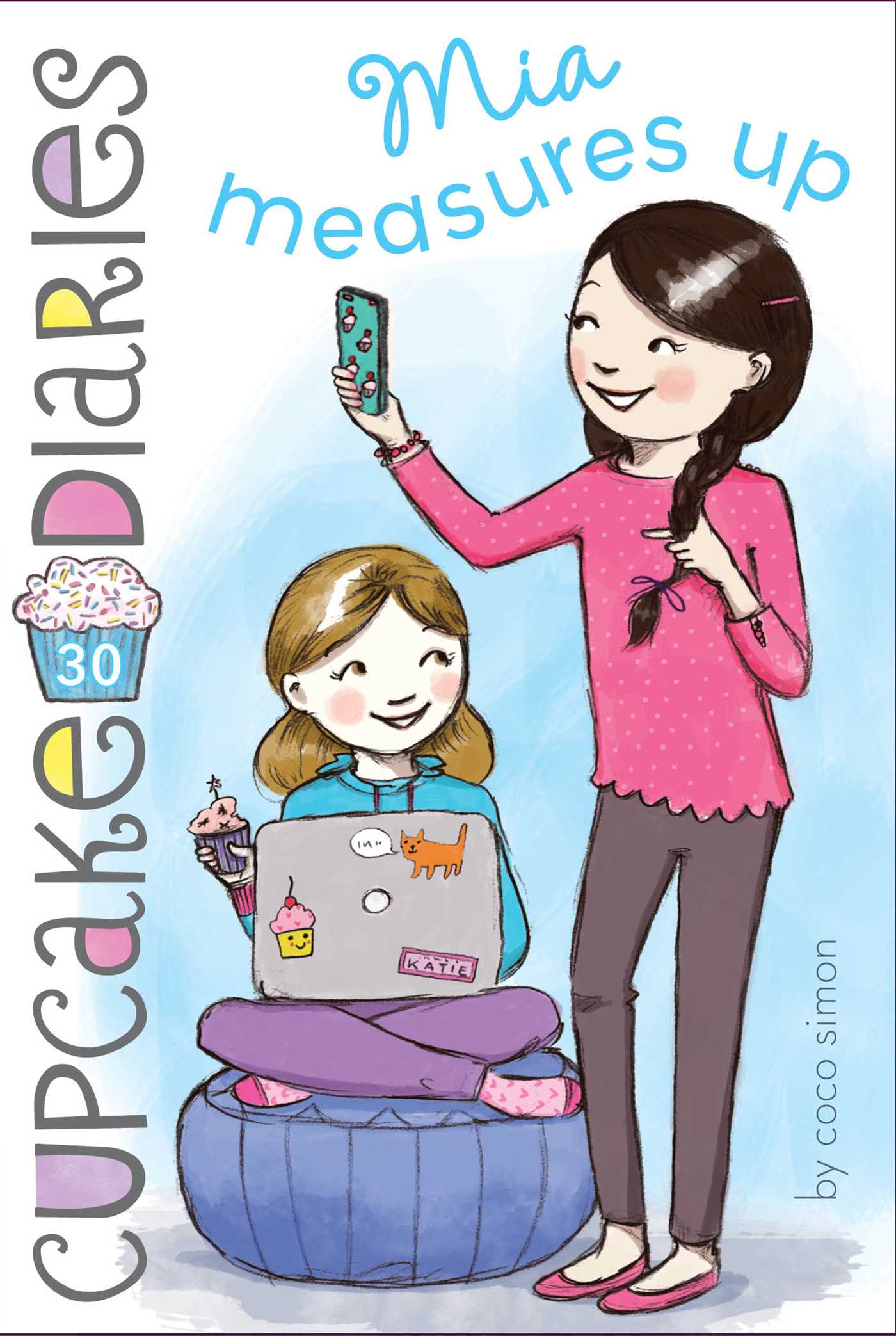 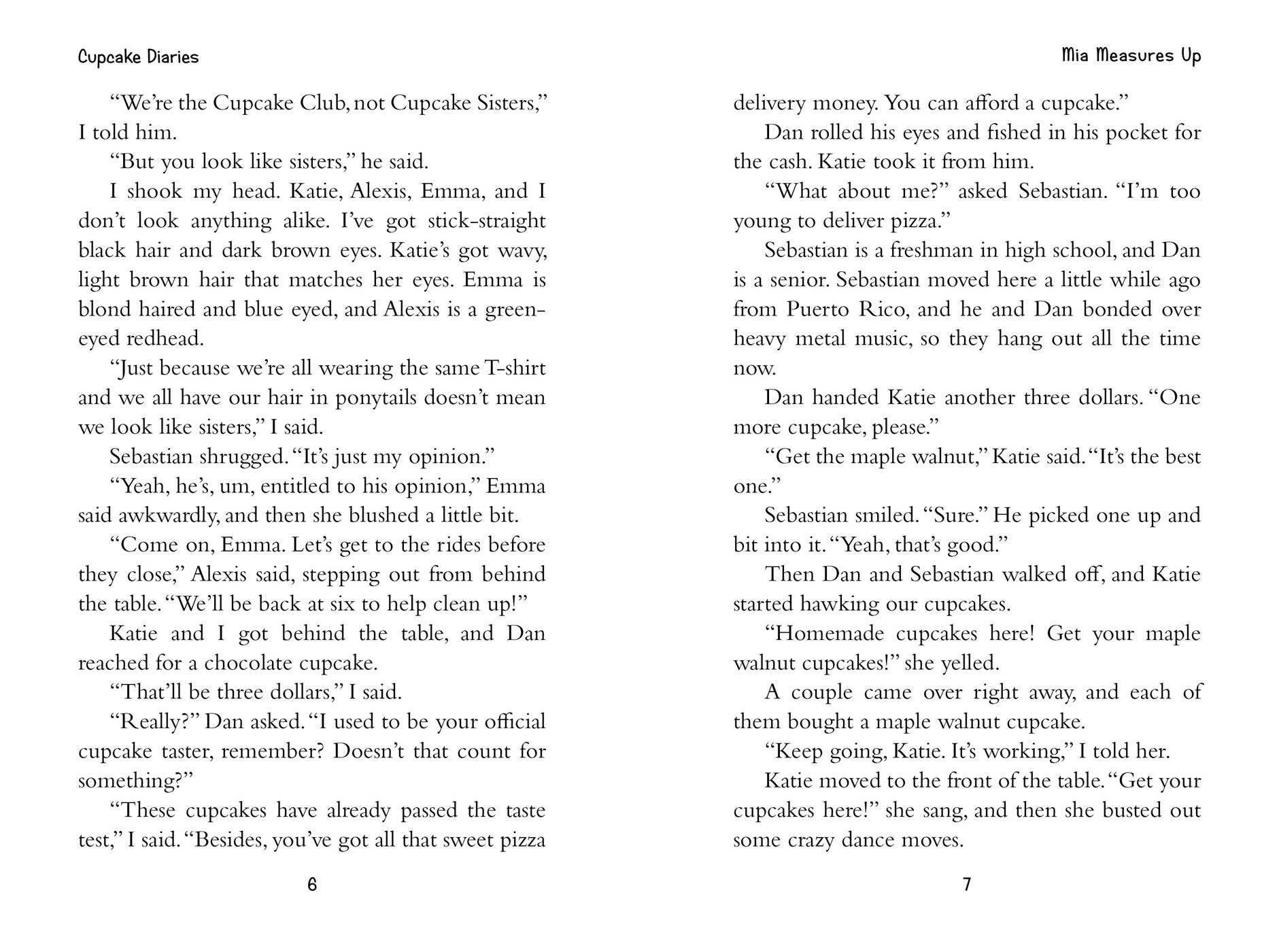 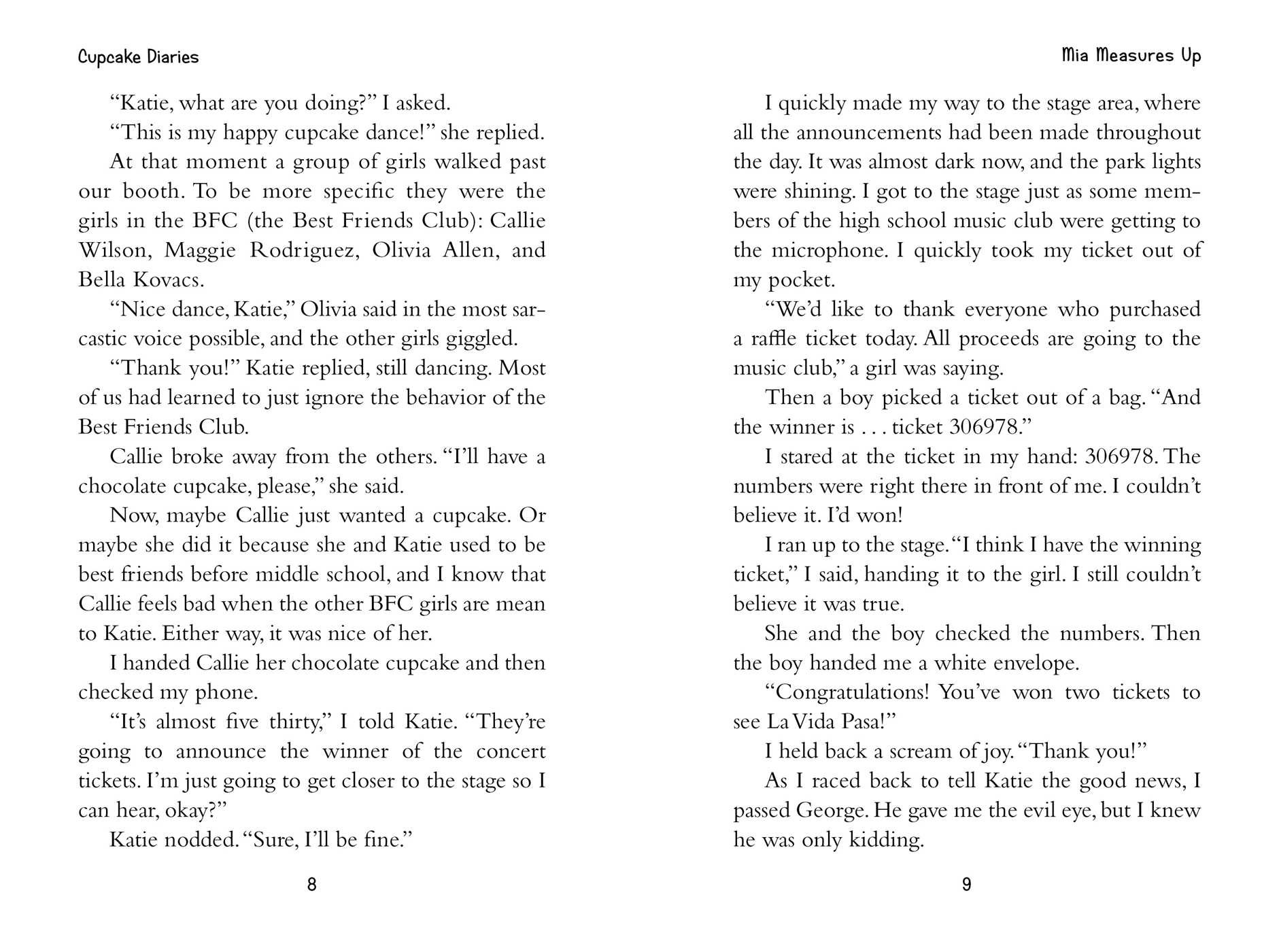 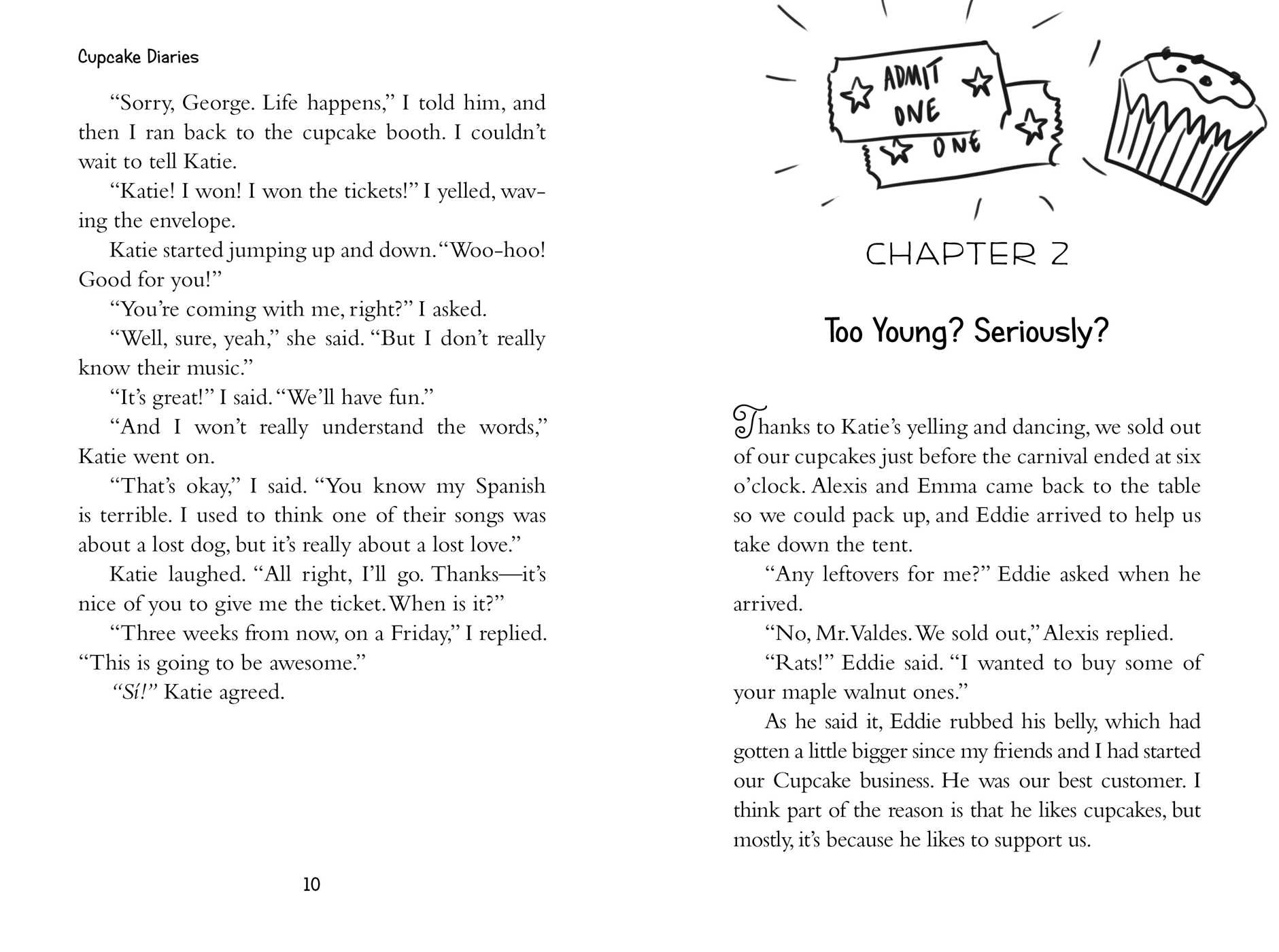 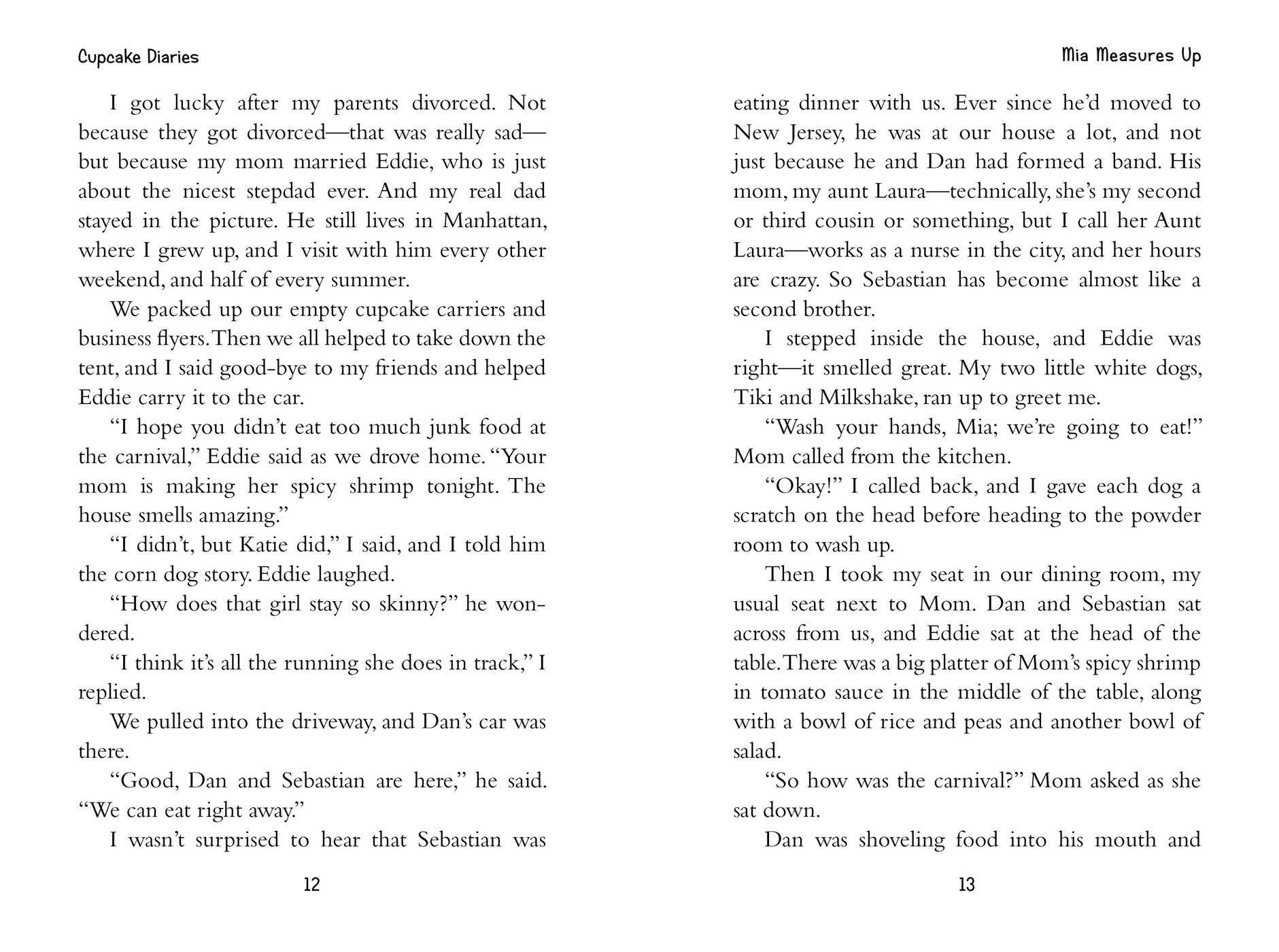 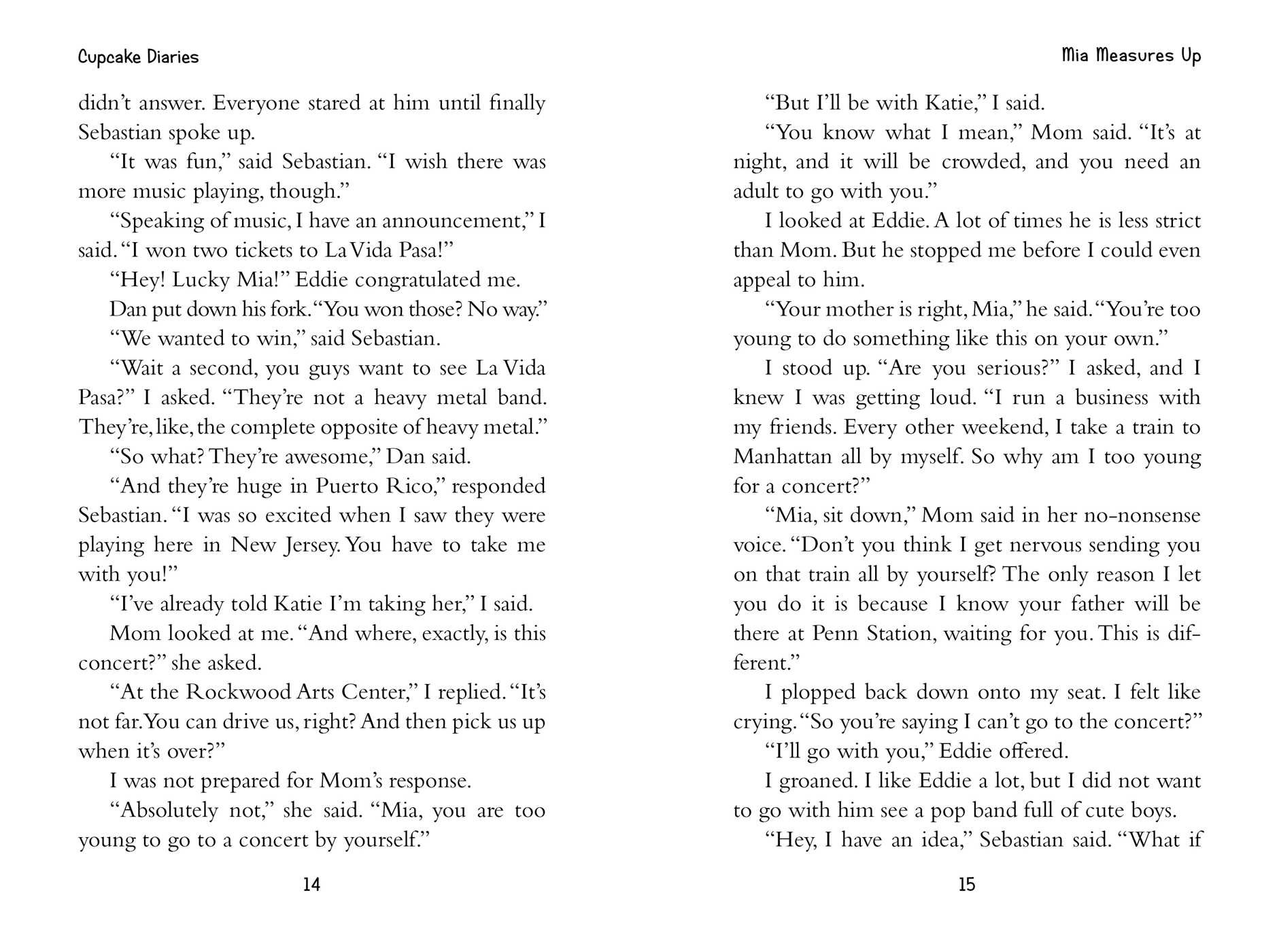 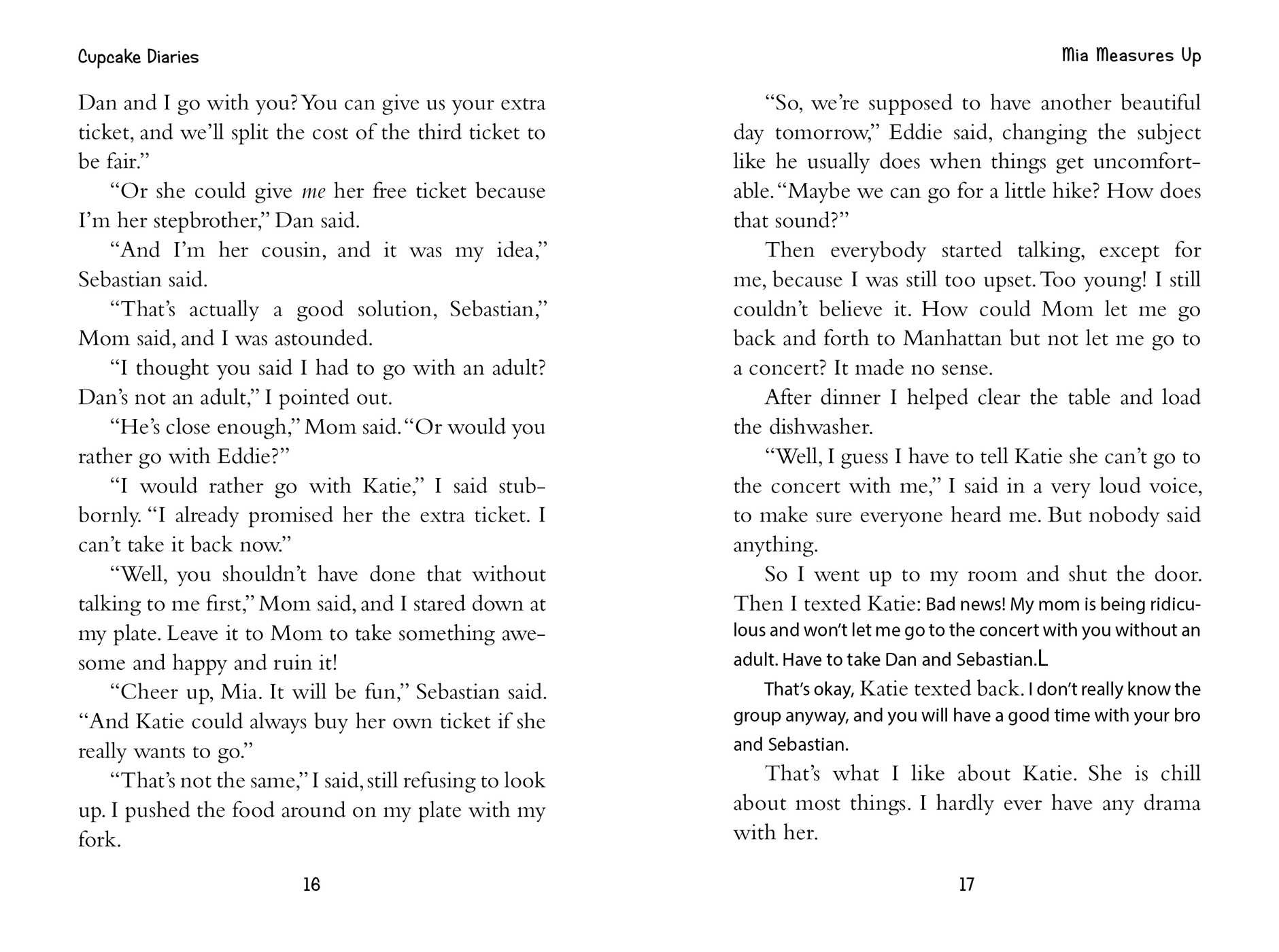 Mia is being cyber-bullied, and she’s determined to find out who is responsible in the latest addition to the Cupcake Diaries series.

Mia is upset when her parents tell her she’s too young to go to a concert without adult supervision. She’s old enough to help run a cupcake business! Why can’t her parents see that she’s also responsible enough to do whatever she wants? And just when she’s reached a compromise with her parents (her older brother Dan will go to the concert with her), Mia finds out she’s being cyber-bullied on social media. It’s the Cupcake Club to the rescue as they all help Mia solve her online bullying mystery!

CHAPTER 1 Life Happens!
I shouldn’t have eaten that third corn dog,” my friend Katie Brown moaned. We were strapped inside a round blue chair on an amusement park ride, and we just kept spinning . . . spinning . . . and spinning. . . .

I looked over at her. Her brown ponytail was whipping back and forth, and her skin looked positively green. (Although that may have been caused by the flashing lights on the ride.)

“Don’t puke on me! I just got these sneakers!” I warned her, laughing, and I saw Katie’s knuckles tightly grip the bar in front of us.

Luckily for both of us, the ride slowed to a stop. Katie and I climbed off. My legs felt wobbly.

“That was a close one,” Katie said, leaning against a tree. “Whew!”

I looked at my phone. “It’s almost five. We should get back to the table.”

It was a beautiful twilight, and Katie and I were with our friends Alexis Becker and Emma Taylor at the Maple Grove Carnival. The four of us own a business together, the Cupcake Club. A few weeks ago Alexis had submitted a vendor application to the carnival so we could sell our cupcakes there, and they’d accepted us!

“I like that we’re taking shifts,” Katie said as we walked past a bouncy house with little kids going crazy inside. “I’m glad I had a chance to go on the rides.”

“Even the Whirling Twirler?” I asked.

“Yes,” Katie insisted. “In fact, I could go for another corn dog about now.” She started looking around.

“Absolutely not!” I said. I grabbed her by the arm and started running toward our cupcake booth.

“But I love corn dogs!” Katie yelled behind me. “I would marry one if I could!”

We were both laughing so hard that I bumped right into someone. Luckily, it was someone we knew from school—George Martinez.

“Hey! The bumper cars are over there,” George said, pointing.

Katie bumped into him too. “My turn!”

“Ouch! You’re jabbing me with your pointy elbows!” George teased.

“Anyway, I’m doing serious business here,” George said, nodding to the booth in front of us. “I need to buy my ticket to win the tickets to the La Vida Pasa concert before they do the drawing.”

I nodded. “I bought mine earlier! So you might as well not bother buying your ticket, because I’m going to win.”

“More like the saying, ‘life happens,’ ” I replied. “Come on, you’ve heard me play them before. They’re so good!”

“Oh yeah,” Katie said. “They sing all in Spanish, right?”

“Sí, amiga,” George answered. “And they are muy bueno.”

He pulled some cash out of his pocket. “And now, if you’ll excuse me, I need to buy the winning ticket.”

“And we’d better get back to the table,” Katie said.

“Good luck!” I called to George as we left. “You’re going to need it.”

Normally, I’m not a person who teases, but George teases everybody all the time (well, mostly Katie), so I thought I should dish it back to him for once.

Our little booth wasn’t far away. My stepdad, Eddie, had set up a tent for us, and the park had provided everyone with tables. Ours had a pink tablecloth with our cupcake logo on the front.

Emma was handing a cupcake to a customer, and Alexis was putting change into our cashbox.

“How are we doing?” Katie asked after the customer had walked away.

“We sold sixteen more while you were gone!” Emma announced. “I think we’ll sell out before this ends at six.”

“We’ll sell the last hour, if you two want to go do the rides,” I said.

Emma looked at Alexis, and they both nodded.

“Whatever you do, don’t eat three corn dogs before you go on the Whirling Twirler,” Katie warned them.

Alexis’s green eyes got wide. “Did you really do that?”

“Not my smartest decision,” Katie replied.

“Well, I was thinking of getting a funnel cake,” Emma said. “But maybe I’ll do that after the rides.”

“Mmmm, funnel cake,” Katie said, and then she put her arms out in front of her and started to zombie-walk toward the funnel cake stand.

Once again, I grabbed her. “You’re not going anywhere,” I said. I took a look at the table. “We’ve got two dozen cupcakes left to sell.”

“We sold out of the vanilla with rainbow sprinkles,” Alexis reported. “But we always do. We need to push the maple walnut ones.”

“Those are the best ones!” Katie said. “Maple walnut cupcakes for the Maple Grove Carnival. People need to be more adventurous with their cupcake choices.”

We turned to see my cousin Sebastian and my stepbrother, Dan. Sebastian was the one who had called us the Cupcake Sisters.

“We’re the Cupcake Club, not Cupcake Sisters,” I told him.

I shook my head. Katie, Alexis, Emma, and I don’t look anything alike. I’ve got stick-straight black hair and dark brown eyes. Katie’s got wavy, light brown hair that matches her eyes. Emma is blond haired and blue eyed, and Alexis is a green-eyed redhead.

“Just because we’re all wearing the same T-shirt and we all have our hair in ponytails doesn’t mean we look like sisters,” I said.

“Yeah, he’s, um, entitled to his opinion,” Emma said awkwardly, and then she blushed a little bit.

“Come on, Emma. Let’s get to the rides before they close,” Alexis said, stepping out from behind the table. “We’ll be back at six to help clean up!”

Katie and I got behind the table, and Dan reached for a chocolate cupcake.

“That’ll be three dollars,” I said.

“Really?” Dan asked. “I used to be your official cupcake taster, remember? Doesn’t that count for something?”

“These cupcakes have already passed the taste test,” I said. “Besides, you’ve got all that sweet pizza delivery money. You can afford a cupcake.”

Dan rolled his eyes and fished in his pocket for the cash. Katie took it from him.

“What about me?” asked Sebastian. “I’m too young to deliver pizza.”

Sebastian is a freshman in high school, and Dan is a senior. Sebastian moved here a little while ago from Puerto Rico, and he and Dan bonded over heavy metal music, so they hang out all the time now.

Sebastian smiled. “Sure.” He picked one up and bit into it. “Yeah, that’s good.”

Then Dan and Sebastian walked off, and Katie started hawking our cupcakes.

“Homemade cupcakes here! Get your maple walnut cupcakes!” she yelled.

A couple came over right away, and each of them bought a maple walnut cupcake.

Katie moved to the front of the table. “Get your cupcakes here!” she sang, and then she busted out some crazy dance moves.

“Katie, what are you doing?” I asked.

“This is my happy cupcake dance!” she replied.

At that moment a group of girls walked past our booth. To be more specific they were the girls in the BFC (the Best Friends Club): Callie Wilson, Maggie Rodriguez, Olivia Allen, and Bella Kovacs.

“Nice dance, Katie,” Olivia said in the most sarcastic voice possible, and the other girls giggled.

“Thank you!” Katie replied, still dancing. Most of us had learned to just ignore the behavior of the Best Friends Club.

Callie broke away from the others. “I’ll have a chocolate cupcake, please,” she said.

Now, maybe Callie just wanted a cupcake. Or maybe she did it because she and Katie used to be best friends before middle school, and I know that Callie feels bad when the other BFC girls are mean to Katie. Either way, it was nice of her.

I handed Callie her chocolate cupcake and then checked my phone.

“It’s almost five thirty,” I told Katie. “They’re going to announce the winner of the concert tickets. I’m just going to get closer to the stage so I can hear, okay?”

I quickly made my way to the stage area, where all the announcements had been made throughout the day. It was almost dark now, and the park lights were shining. I got to the stage just as some members of the high school music club were getting to the microphone. I quickly took my ticket out of my pocket.

“We’d like to thank everyone who purchased a raffle ticket today. All proceeds are going to the music club,” a girl was saying.

I ran up to the stage. “I think I have the winning ticket,” I said, handing it to the girl. I still couldn’t believe it was true.

She and the boy checked the numbers. Then the boy handed me a white envelope.

I held back a scream of joy. “Thank you!”

As I raced back to tell Katie the good news, I passed George. He gave me the evil eye, but I knew he was only kidding.

“Sorry, George. Life happens,” I told him, and then I ran back to the cupcake booth. I couldn’t wait to tell Katie.

“Katie! I won! I won the tickets!” I yelled, waving the envelope.

Katie started jumping up and down. “Woo-hoo! Good for you!”

“You’re coming with me, right?” I asked.

“And I won’t really understand the words,” Katie went on.

“That’s okay,” I said. “You know my Spanish is terrible. I used to think one of their songs was about a lost dog, but it’s really about a lost love.”

Katie laughed. “All right, I’ll go. Thanks—it’s nice of you to give me the ticket. When is it?”

“Three weeks from now, on a Friday,” I replied. “This is going to be awesome.”