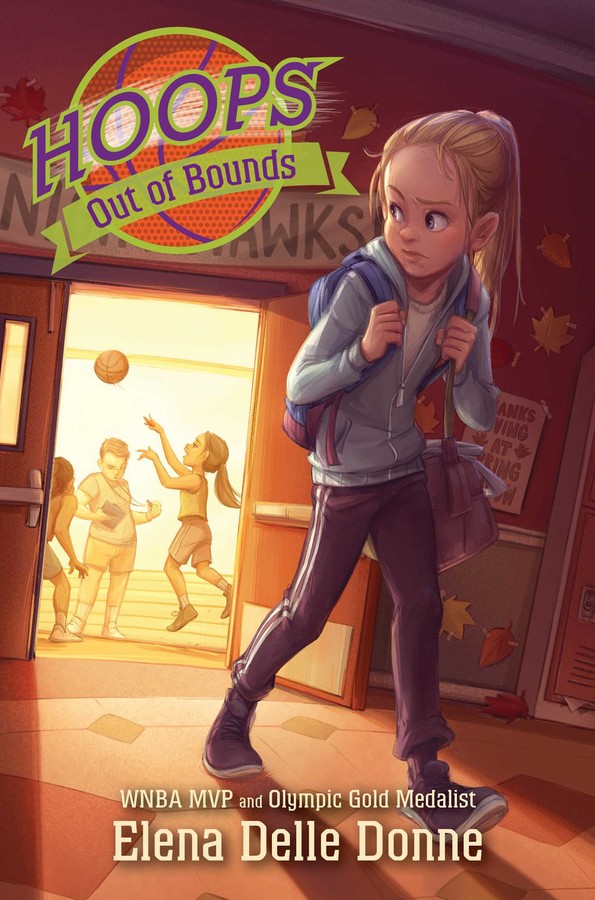 From WNBA MVP, Olympic gold medalist, and global ambassador to the Special Olympics Elena Delle Donne comes the third novel in a middle grade series with as much heart as there is game.

Elle is finally finding her groove and is excited about how her year is turning out. But when her team loses a major game against their rivals, Elle doesn’t know if basketball is worth it anymore. It feels like she can’t win—even when she’s improving and doing well, everyone always expects more from her.

With her changing attitudes on basketball, will she let everyone she knows down if she decides to take a break?

The Hoops series: Elle of the Ball, Full-Court Press, and Out of Bounds

If, like Elle, you’re a seventh-grade girl and already six feet tall, everyone notices you. And if, like Elle, you’re pretty good at basketball, everyone’s sure you’ll be a pro someday. But Elle isn’t so sure. Does she love basketball more than anything? What would she do if she didn’t spend so much time on the court? Elle loves being part of a team with so many of her friends, but the coach can be tough and even teammates can be mean. Written by a real-life WNBA star, the first three books in the Hoops series follow Elle as she plays a lot of basketball while also trying to figure out who she is and what she really wants.

1. How does Elle’s height impact her life? Describe the advantages and disadvantages, if any. How does she feel about it? Give examples from all three books.

2. Why does Elle play basketball? Think about both positive and negative aspects, and discuss whether you think she should keep playing. Make sure to give arguments for both sides.

3. If Elle didn’t play basketball, what might she do with her time? Name other activities that she enjoys, or things that she’s good at. What could she pursue in the future if she decides for certain not to remain on the basketball team?

4. Avery and Blake are Elle’s best friends. Describe her relationship to each of them. How do they make Elle’s life better? What conflicts does she have with them, and how are these issues resolved?

5. Elle loves her sister, Beth, very much. Why does she consider Beth to be a positive force in her life? Describe Beth and her role in the family. Find places where Elle discusses Beth with those outside of her family, and analyze what she says.

6. Describe other members of Elle’s family, including her extended family. How do her parents support her athletic activities and other ventures? What role does her brother play in her life? Talk about the pressure her grandparents and uncle put on her to play basketball, and how Elle feels about it.

7. How does Elle first encounter Zobe? How does he end up becoming the family pet? What does he add to the family and to Elle’s life? Discuss why he needs training and what it consists of. How might the training resemble coaching a basketball team?

8. Bianca gives Elle a hard time both on and off the court. What motivates her insults and hostility? How does Elle feel about Bianca’s behavior? When Blake and Bianca start spending time together, how does Elle react and why? Would you have reacted similarly?

9. Tiff is Bianca’s good friend, yet she also stays on good terms with Elle. How would you describe Tiff? How do she and Elle interact? Why can navigating friendships be difficult?

10. What do you learn about hijabs from Tiff and her mother? How does Tiff tie the hijabs into her wardrobe?

11. Being on the team helps Elle make new friends, one of whom is Amanda. Describe what Amanda and Elle have in common, and how you think Elle feels about her. How do you know? Another new friend is Caroline. How does Caroline’s younger brother, Pete, bring Elle and Caroline closer together?

12. The coach has the most criticism for her daughter, Patrice, and Elle. Analyze why she might be so hard on both of them. Do you think the negative focus of her comments is helpful? What else could she do to motivate those two players?

13. In Elle of the Ball, Elle is frustrated about the cotillion. Describe the cotillion and Elle’s reaction to different aspects of it. What are her objections to the dance and the preparation for it? How does she influence future changes in the cotillion? Have you ever objected to the way something was handled and worked to make it better in the future?

15. In Full-Court Press, Elle struggles with time management. What are some of the activities that she wants to do or has to do? What goes wrong when she doesn’t manage her time well? Explain what helps her start to get better at it. What advice would you have given her?

16. Describe Elle’s home, school, neighborhood, and town. What advantages does she have that a lot of kids don’t have? How do those advantages make a difference in her life and help her succeed? Does Elle understand the impact of these advantages? Do you think they put more pressure on her? How might she help other kids who don’t have the same advantages she has?

17. Elle tells her own story in a first-person narrative format. Why do you think the author made this choice? How might the story have changed if it had been written in third person? Did it make a difference to you as a reader that the author is a WNBA star? Explain your answer.

18. Why do you think schools have sports teams? Do you think sports teams have educational value? What might they teach you? Do you think they improve students’ lives? Explain your reasoning. List some reasons why different girls have chosen to play on Elle’s team.

Have students work in pairs to research therapy dogs and other therapy animals. After their initial research, students should narrow their focus to a particular type of therapy animal and the animal’s work. What does the animal do? How does it interact with humans? How is it trained? Have the students organize the information onto a poster to display in the classroom. Hold a class discussion about the different therapy animals and their work.

After thinking about Coach Ramirez, each student should write an advertisement for a middle school basketball coach. The ad should lay out the qualities that the student thinks are most important in a successful coach, and the kind of background they think would be helpful. Ask them to think about the potential coach’s education, athletic experience, work experience, and so on. Have students type up their ads and meet in small groups to compare what each person thought was most important.

Starting Out on the Right Foot

Elle, who has her own pregame routine, has also researched the pregame routines of WNBA players. Have students do similar research on the preperformance routines of athletes in different sports or of musicians, actors, public speakers, comedians, or even surgeons. Students should take notes on their research to bring to a classroom discussion about what they learned, why performers have such routines, and whether or not they think the routines help.

Author Elena Delle Donne is a highly successful basketball player in the WNBA. Have each student choose a different WNBA player to learn more about. They should find professional facts about the player, interesting details about her background, and career highlights. Then they can create a multimedia presentation about the player to share with the class. Have the class discuss the similarities and differences between these women’s paths to the WNBA and imagine what life might have been like for them when they were in elementary and middle school.

Volunteering at Camp Cooperation is a highlight of Elle’s year. What other volunteer activities can kids do? Have students draw from their own experiences to compile a list of ideas. Then have a class discussion about the benefits of volunteering both from the volunteer’s perspective and for the community or recipient.

Like Elle, many students struggle with time management. Have students jot down notes about what Elle does to improve her scheduling. Then have them ask adults and older students they know for tips on time management. Working in small groups, students should prepare and distribute a Time Tips brochure based on what they learned. Find templates by searching for the keyword “brochure” at www.readwritethink.org. 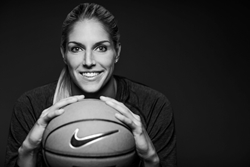 Elena Delle Donne has been a professional women’s basketball player since 2013, when she was selected by the Chicago Sky second overall in the WNBA draft. She was the 2015 WNBA MVP and won the gold medal with the USA’s women’s basketball team in the 2016 Olympics. She is the global ambassador for the Special Olympics and became the first national ambassador for the Lyme Research Alliance. Elena also plays host to De11e Donne Academy, a basketball camp that runs throughout the year, where she mentors and coaches girls ages seven to eighteen. She now plays for the Washington, DC, Mystics.