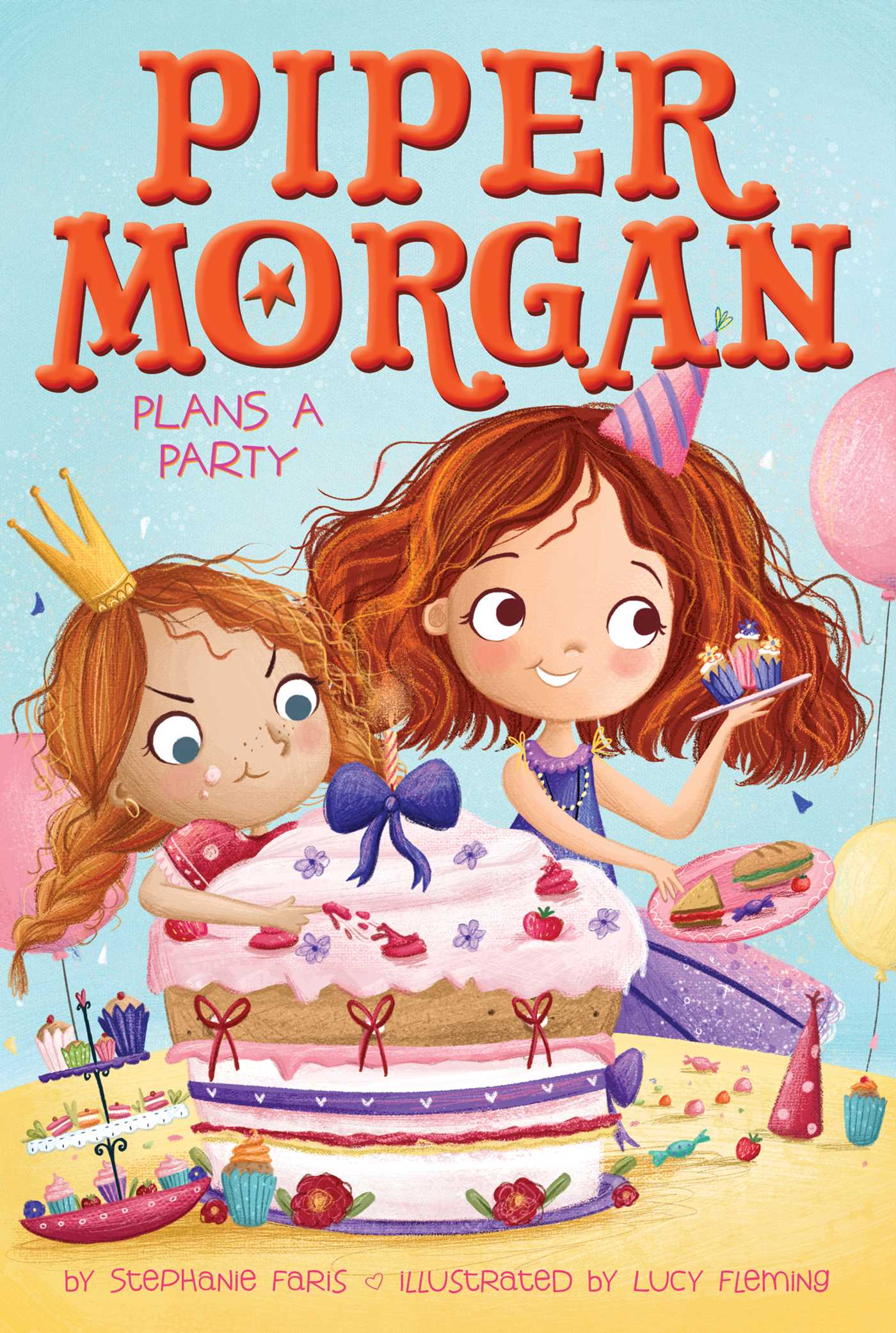 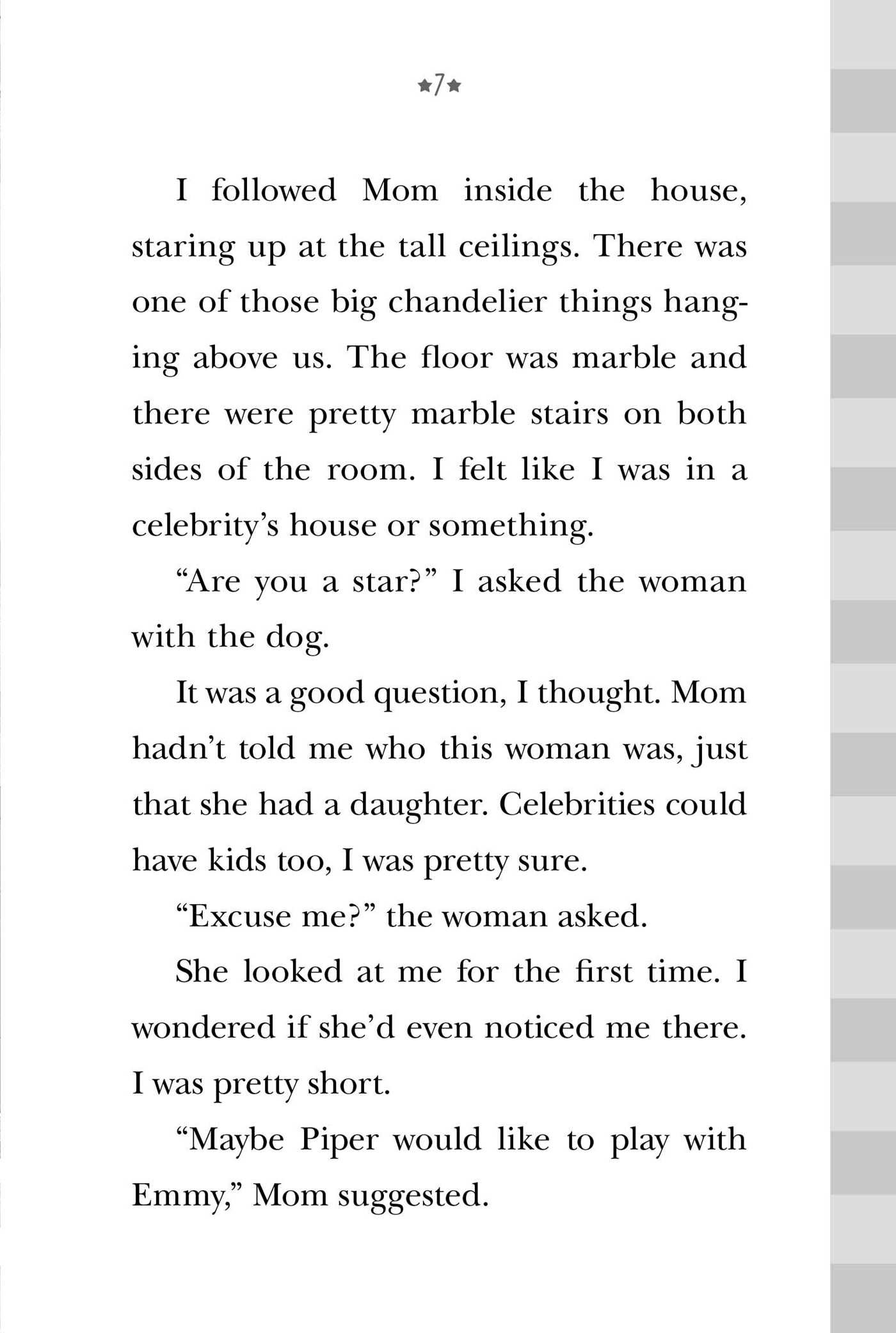 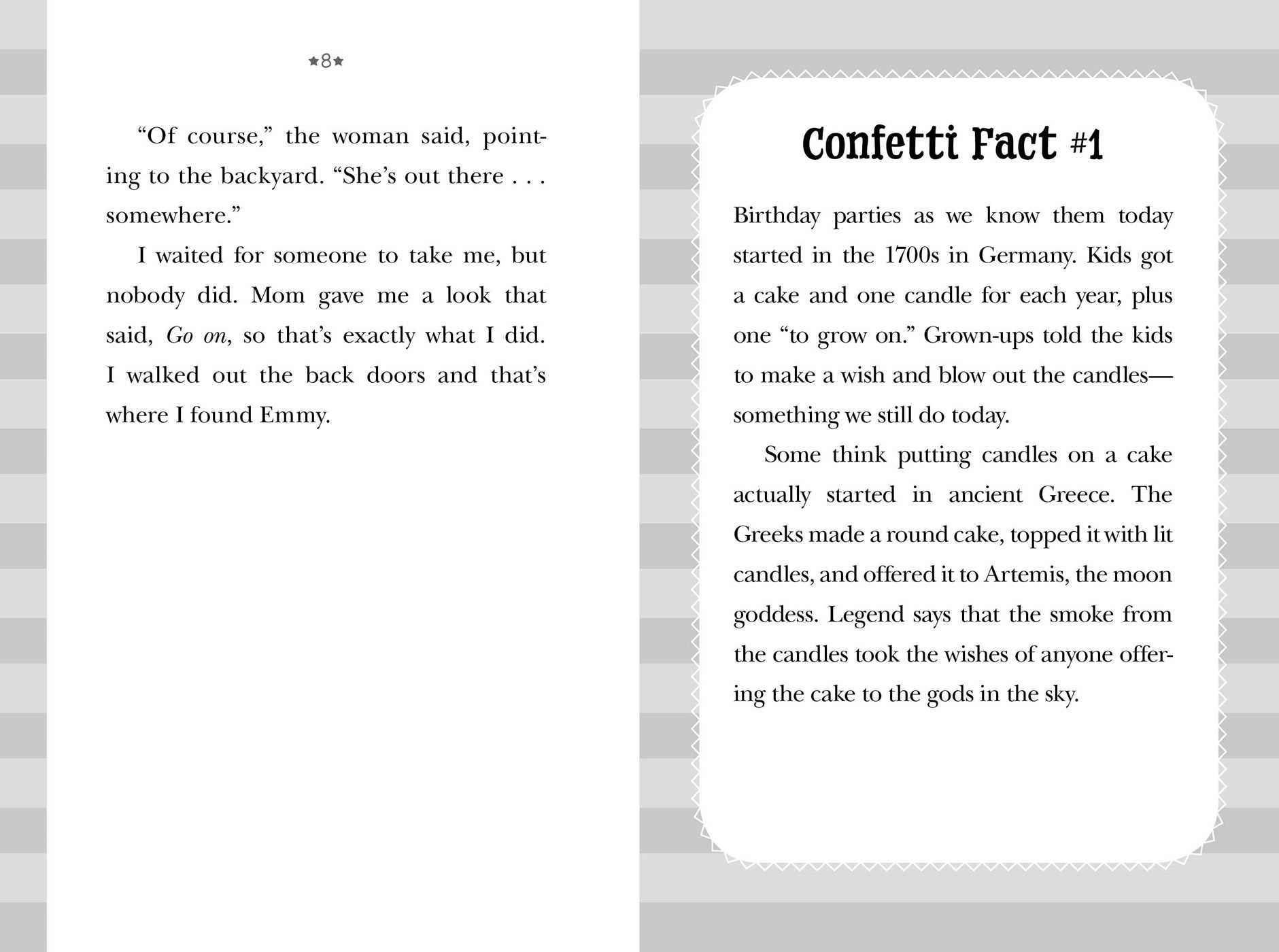 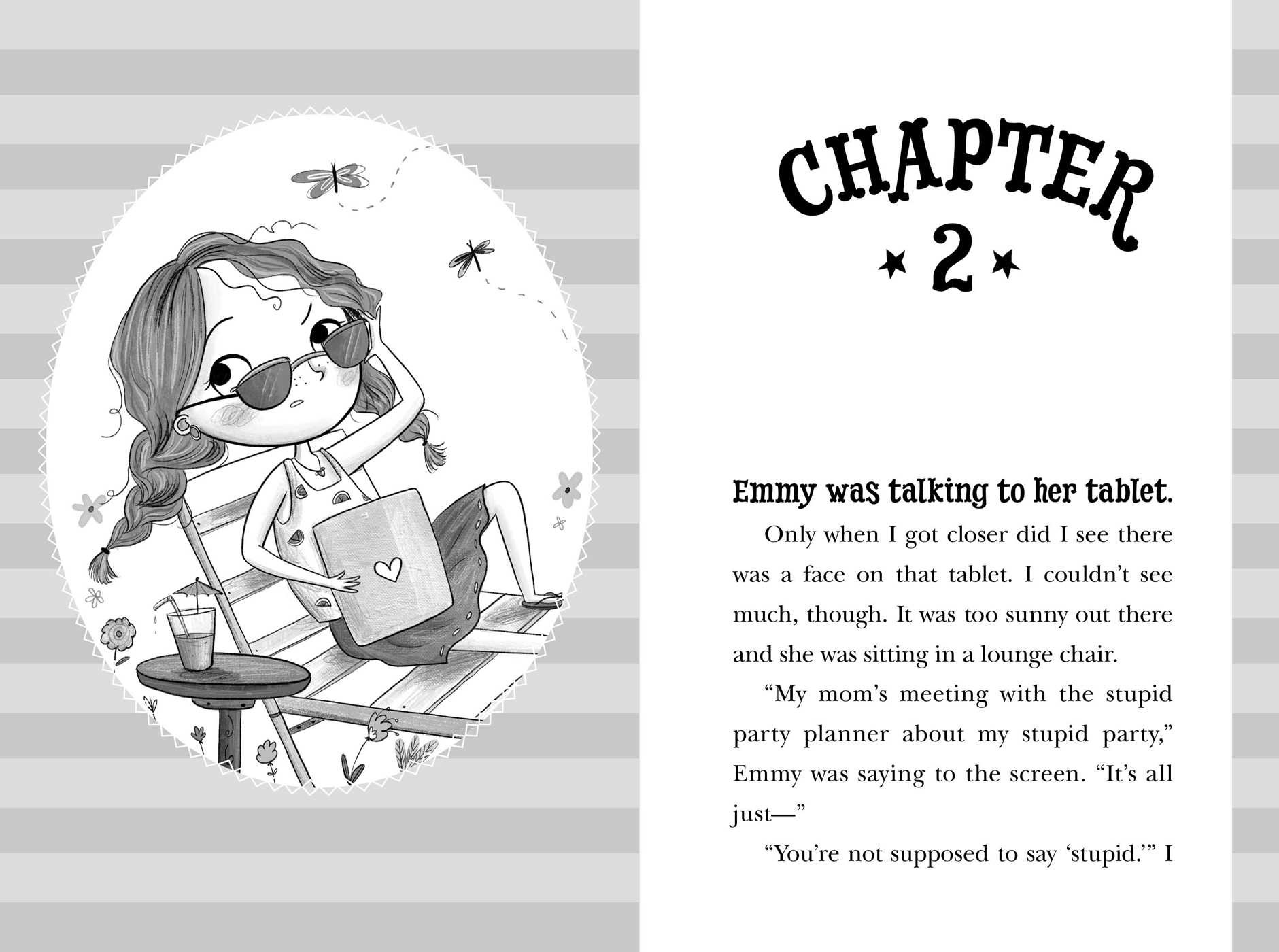 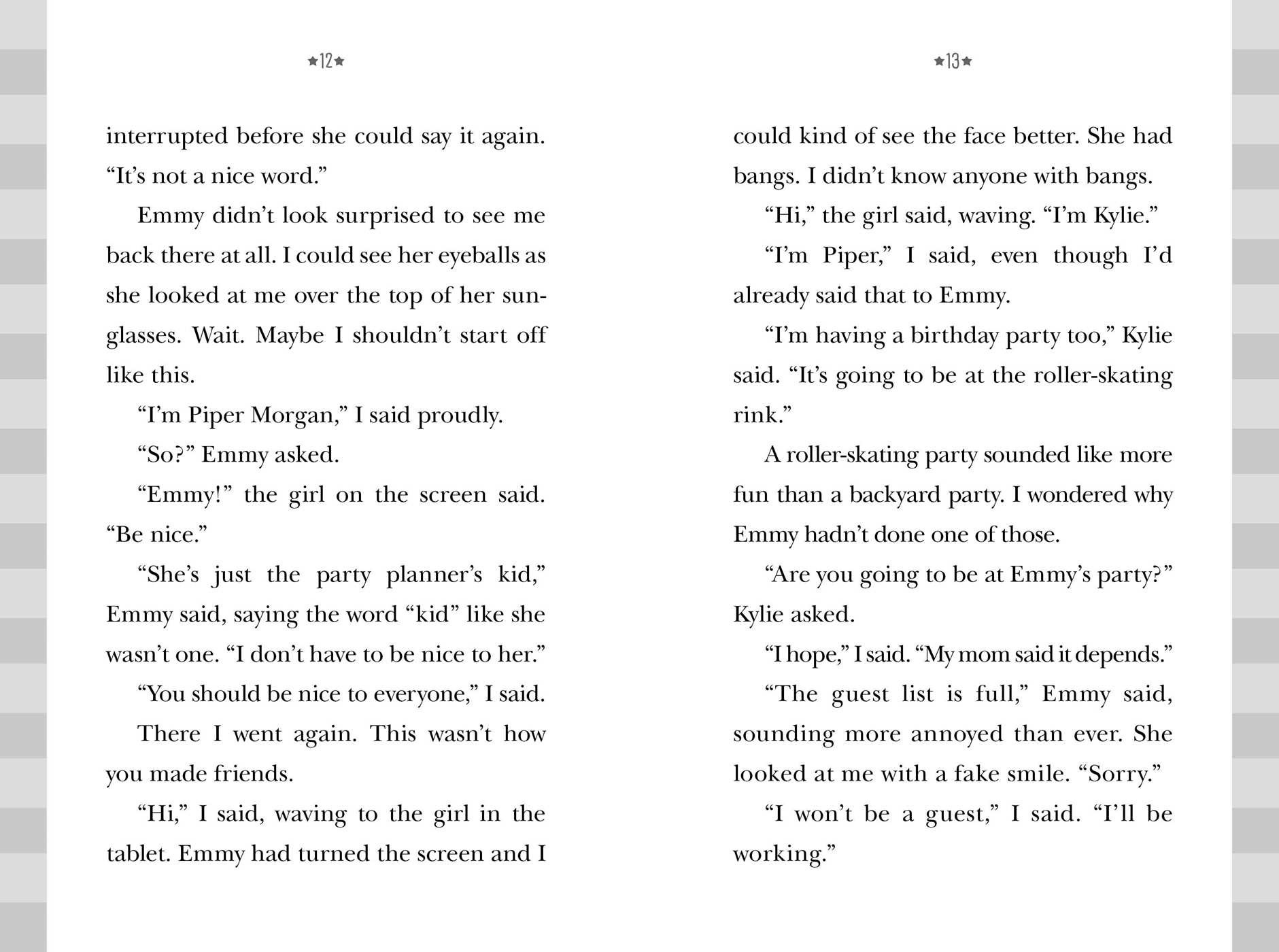 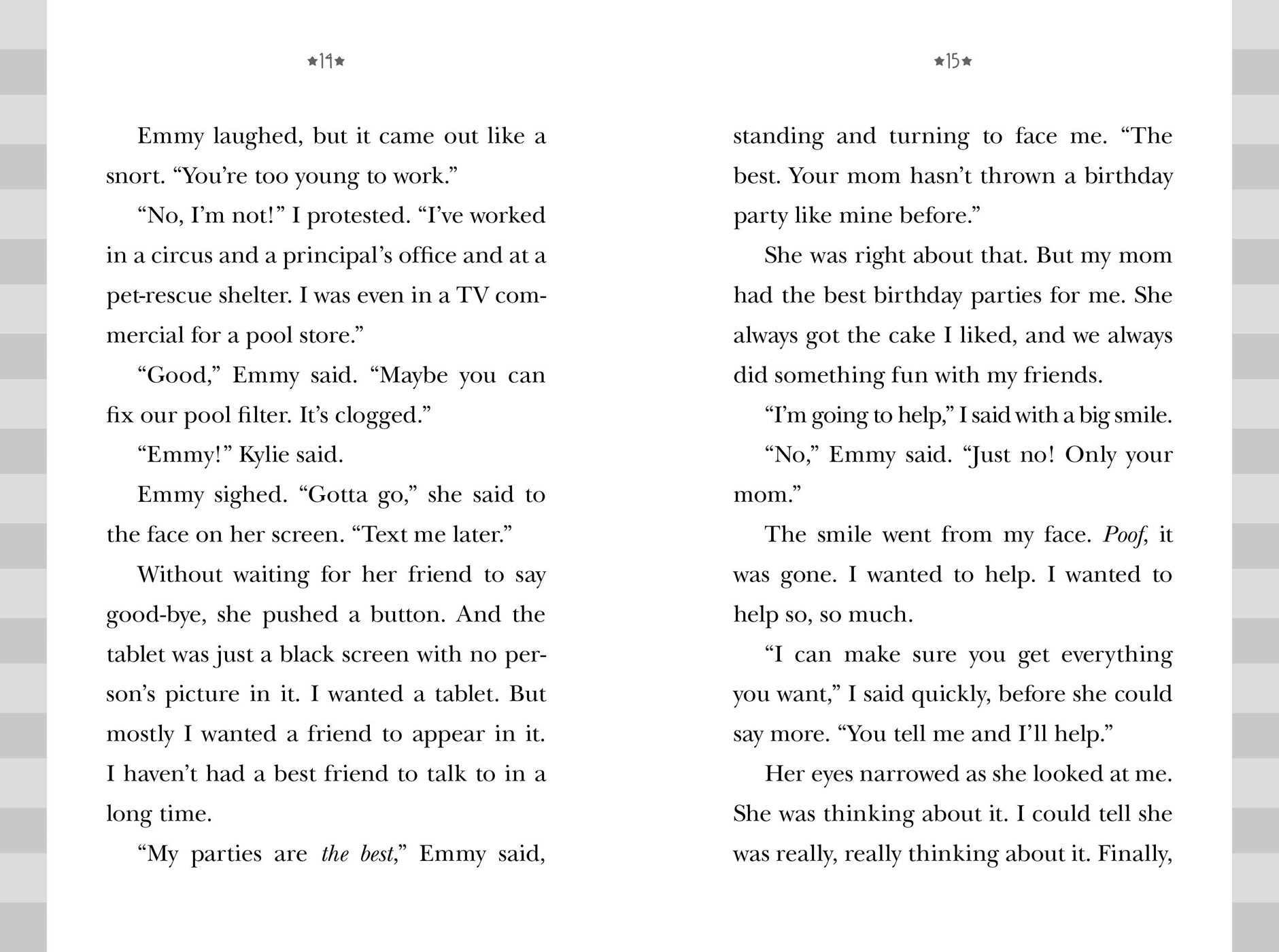 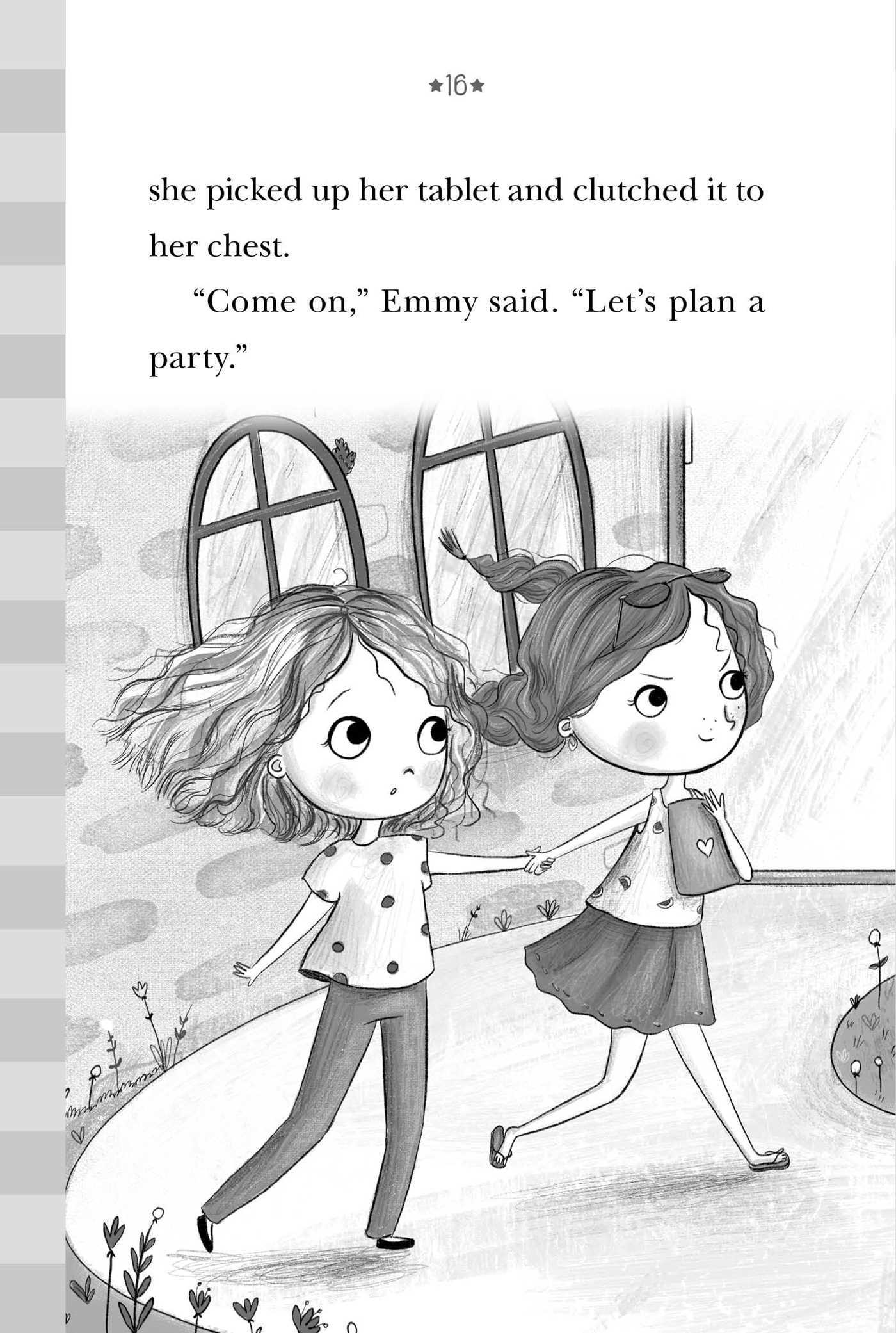 Piper tries to plan the perfect party in the fifth book of the charming Piper Morgan series.

Piper is excited to help her mom plan a big party for another girl her age. After all, who doesn’t love a good party? But when Piper and her mom arrive, they are in for an unpleasant surprise: A spoiled little girl, a huge mansion, and a list of impossible demands from the birthday girl that includes a real-life princess and grape jelly beans. How will they ever pull off the show-stopping party that Emmy is demanding? It seems like no matter what they suggest, Emmy is never happy. Can Piper help her mom pull off the best party ever? Or will the party turn into a big fat mess?

“Are we lost?” I asked Mom as she slowed the car and looked down a street we were about to pass.

“What do the directions say?” Mom asked.

Oh yeah. Directions. There was this sheet that had a list of weird things like “1.5 miles turn right on Montvale Lane.” I didn’t understand what that meant, but I just read them to Mom when she asked.

We were on our way to a ranch. A middle-of-nowhere ranch. There would be real horses, and Mom said I could maybe ride them later if I was really good. It was up to my mom’s new client, who had asked us to this ranch. We hadn’t met her yet. Just talked to her on the phone.

The ranch is my mom’s new job. Well, sort of. My mom’s a temp worker, which means she does temporary jobs in lots of different places. This time her job is as an event planner. The event is a birthday party for a girl who lived on a ranch at this place in the mountains. Mom says the people having the party are what you call “loaded.” I think that means “really rich.”

The hard black road turned into a dirt road when we got closer. Then there was a super-long fence, and that’s when I saw them.

I don’t know what that saying means, except “be quiet” for people named Piper. Because it’s similar to my name, you see.

I tried to turn all the way around in my seat to see the horses, but it was hard in the booster seat I had to sit on. That was okay, though, because there were more horses there. And there. And there.

I was so busy looking at the horses, I almost missed the big, ginormous house up ahead. It was the biggest house I’d ever seen. It was probably even bigger than the school I used to go to before we started moving around. I wondered what it would be like to live in a house that huge.

“The little girl’s name is Emmy,” Mom said. “She’s just a little older than you.”

“She’s going to be nine!” I guessed. Because I’m seven years old. I kind of wished she was younger than me, because sometimes that meant I got to be boss, which was really awesome. It hadn’t happened for a long, long time, though.

I got to carry Mom’s folder on the way to the door. I had to hold it carefully so that it wouldn’t bend. There were important papers in there that she had gotten from her new boss. Her new client was named Amie with an “ie.” I saw her name on Mom’s folder full of party-planning ideas.

Mom rang a doorbell, but I didn’t hear anything through that huge wooden door. There were windows on either side, but you couldn’t see through the glass because it was so pretty and colorful, like glass in a church.

After the longest wait ever, the door opened. The fanciest woman I’d seen in my entire life was standing there, holding a small puppy. It looked almost as cute as my nanna’s dog, Oreo.

“Yes?” the woman asked, looking over the top of my mom’s head.

“Julie Morgan,” my mom said. “My boss sent me over to get information about your event.”

“Of course,” she said. “Come in.”
Stephanie Faris

Stephanie Faris knew she wanted to be an author from a very young age. In fact, her mother often told her to stop reading so much and go outside and play with the other kids. After graduating from Middle Tennessee State University she somehow found herself working in information technology. But she never stopped writing. When she isn’t crafting fiction, Stephanie is indulging her gadget geek side by writing for online technology sites. Her work is regularly featured on the small business blogs for Intuit and Go Payment and she is a featured columnist for SmallBizTechnology.com. She lives in Nashville with her husband.

Lucy Fleming has been an avid doodler and bookworm since early childhood. Drawing always seemed like so much fun, but she never dreamed it could be a full-time job! She studied art and practiced drawing every day, and in no time, went on to graduate from the University of Lincoln (UK) with a degree in illustration. She lives and works in a small town in England with her family and a little black cat. When not at her desk she prefers nothing more than to be outdoors in the sunshine with a hot cup of tea.