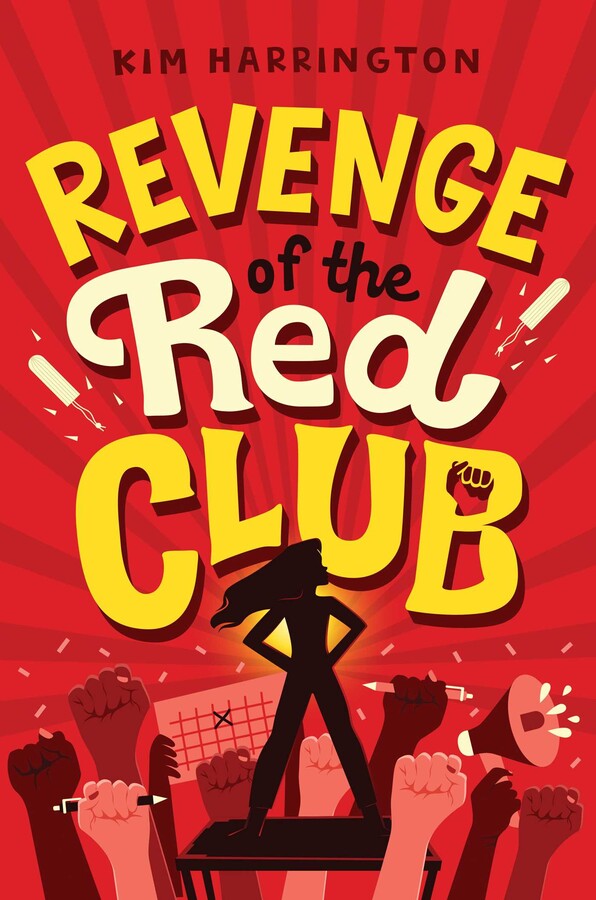 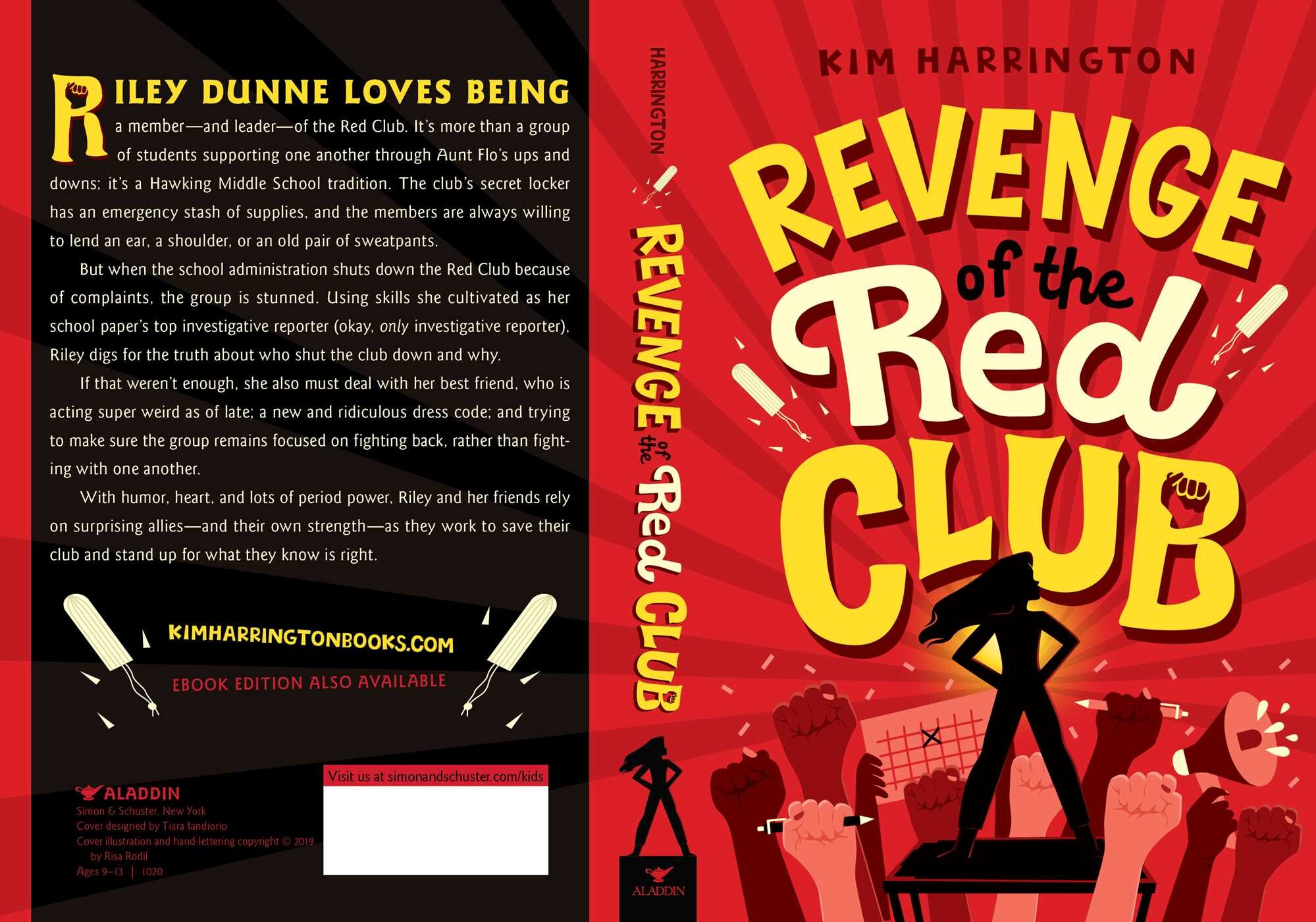 Revenge of the Red Club

By Kim Harrington
PRICE MAY VARY BY RETAILER

A tween reporter discovers an important and beloved club at school is being shut down—and uses the power of the pen to try and activate some much-needed social change in this period-positive and empowering middle grade novel about the importance of standing up for what you believe in.

Riley Dunne loves being a member of the Red Club. It’s more than a group of girls supporting each other through Aunt Flo’s ups and downs; it’s a Hawking Middle School tradition. The club’s secret locker has an emergency stash of supplies, and the girls are always willing to lend an ear, a shoulder, or an old pair of sweatpants.

But when the school administration shuts the Red Club down because of complaints, the girls are stunned. Who would do that to them? The girls’ shock quickly turns into anger, and then they decide to get even.

But wallpapering the gym with maxi pads and making tampon crafts in art class won’t bring their club back. Only Riley can do that. Using the skills she has cultivated as her school paper’s top investigative reporter (okay, only investigative reporter), she digs for the truth about who shut the club down and why. All the while dealing with friendship drama, a new and ridiculous dress code, and a support group that is now more focused on fighting with each other than fighting back.

Can she save the Red Club before this rebellion turns into a full-scale war?

CHAPTER 1
WE WEREN’T SUPPOSED TO LOOK at our phones during school hours, but I slid mine out of my pocket anyway. I had to see if the new edition of the Hawking Observer had posted. My middle school’s newspaper was hosted on the school website. We had a sportswriter, an advice columnist, a reviewer, and one intrepid investigative reporter (that was me).

I loved seeing my byline, Riley Dunne, beneath a story. Though one of these days I had to get a new photo. The one they used was from two years ago, when I’d entered Hawking Middle in sixth grade. Sure, I still had the same mousy-brown hair and wore the same hoodie-and-jeans ensemble most days. But now I was two years older and had recently gotten my braces off.

This new article was a biggie. I’d completed an in-depth investigation into the supposedly gluten-free chicken nuggets at lunch, which had given my friend Cee a no good, very bad day. She had celiac disease, so eating anything with gluten was harmful. After some before-school cabinet snooping, I’d found that our cafeteria’s food supplier had switched brands, and the new breading was certainly not gluten-free.

I refreshed the page again. Still no update. I hoped my editor hadn’t killed the story. But Ms. Bhatt was usually pretty cool about my investigative reports, and she hadn’t mentioned having a problem with the article.

Math class was going to start any minute, so I put my phone away. Then I looked up and saw the new girl, Julia Alpert, coming down the aisle in white jeans and a cute purple top that stopped right at the waistband. She seemed sweet, but kind of shy.

Stella Duval looked her up and down from one row over. “You’re not supposed to wear white pants after Labor Day. You know that, right?”

Stella had more rules for fashion than the entire US government had laws. She dressed each day like school was a beauty pageant, which wouldn’t be bad if she didn’t judge other people who didn’t go all out. Personally, I thought if you wanted to wear sweats, go for it. You wanted to wear a dress and heels when it was snowing out? Get it, girl. But Stella had somehow appointed herself the unelected fashion judge of our school.

Julia didn’t respond. She just stared down at her desk. I opened my mouth to make a snarky comment back to Stella, but before I could, Mr. Barlow blew into the room like a human tornado. Papers flew off the top of the pile he was carrying, and he nearly knocked over a cup of coffee on his desk when he laid them down.

“I have your tests graded,” he announced, and a rumble of nervous chatter went through the room. Chairs squeaked as kids shifted in their seats.

With that news at the forefront of my brain, I stopped thinking about my article and started worrying about algebra. It was a tough class in general, but that test had been even harder than most. Mr. Barlow walked the aisle, passing the exams back facedown on students’ desks. This was supposed to somehow keep students’ grades private. But you knew exactly how someone did as soon as they flipped their test over. Eighth graders weren’t exactly known for their poker faces.

I watched as Ava, my best friend, got her test in the seat beside me. Her face fell, and I saw a flash of a seventy-something as she slapped the test back down. She hadn’t studied much. She hadn’t had time. Ava was a competitive gymnast. Her parents drove her forty minutes almost every day to an award-winning gym because she’d surpassed the one here in town. Even weekends, for hours and hours. Ava was good. Like Olympics good, in my opinion. But because of all the time she put into gymnastics, she didn’t have as much time for other things—like grades, having a social life, etcetera. I was the only friend she actually spent time with outside of school. We’d lived next door to each other our whole lives, but it was getting harder to find time to get together.

Mr. Barlow headed down my row next. My stomach curled up into a tiny ball. I tried to look for any hint in his face, like disappointment, or OMG, you totally rocked this. But I saw nothing. This test was so hard. What if I’d bombed it?

He placed the paper facedown and moved on behind me. I gingerly turned it over. Eighty-nine! I blew out a breath so hard it almost blew my test off my desk.

“I know this test was difficult,” he said, returning to the front of the classroom. “But I’m not here to hand out easy As. I’m here to challenge you. And I think every single one of you can rise to that challenge if you put the effort in.”

He lifted a marker and wrote a problem on the whiteboard. “Everyone got number three wrong, so we’re going to go over that one together. I need a volunteer for the board.”

No one raised their hand.

“Okay, I’ll just call on someone.” His eyes scanned the room. I immediately began rummaging in my backpack on the floor. He certainly wouldn’t call on me if I was super busy looking for a pencil or whatnot.

Poor Julia, though. What a day. First Stella called her out on her post–Labor Day wear, and now this. But as she stood up to walk to the board, things suddenly got way, way worse.

Julia had an uninvited guest—Aunt Flo, the most obnoxious, unwelcome visitor. And Julia certainly hadn’t been expecting Flo to show up. I didn’t think she even knew she was here. But due to that dark red stain on her white jeans, the whole class would know soon.

Julia started her walk down the aisle.

I yanked my hoodie over my head. I’d be cold in just a T-shirt, but this was more important. I ripped a sheet of paper from my notebook and stuffed it in my pocket. Then I dashed down the aisle, swooped my arms around her, and quickly tied the sweatshirt around her waist.

“You need this,” I whispered.

I continued down the aisle and tossed the crumpled-up piece of paper from my pocket into the trash. Then I casually walked back to my seat. Nothing to see here. Just had to throw some scrap paper away.

But unfortunately, some people had seen. Bad people. The front of the class was oblivious, but Brody Scruggs and a couple of his buddies from the back were snickering and laughing with one another.

Mr. Barlow turned around. “Is there a problem?”

They clammed up and shook their heads. But as soon as Mr. Barlow turned away to hand the marker to Julia, evil grins spread across their faces once again.

Ava gave me a nod and whispered, “Good work,” under her breath.

I only wished I’d been faster. Or that Julia’s Aunt Flo hadn’t decided to visit on a day that she got called up to the board. Or that she hadn’t broken the Labor Day white-pants rule.

“I hope you’re not going to take that sweatshirt back,” Brody sneered.

“Why wouldn’t I?” I asked, giving him a fake bewildered look.

He rolled his eyes. “You know why.”

Mr. Barlow turned around. “Is there a problem in the back of the room?”

I nonchalantly began scribbling numbers in my notebook, not a care in the world. Brody huffed beside me. But I doubted that he was upset about getting in trouble for talking. He got in trouble a thousand times a day. What had really gotten under his skin was that he was unable to get under mine. I didn’t give him the satisfaction of getting upset, and I wouldn’t let Julia do it either.

I smiled as I looked at the numbers I’d written down. It was time to introduce the new girl to the Red Club.

Kim Harrington is the author of Clarity (a 2012 ALA Quick Pick for Reluctant Readers), Perception, The Dead and Buried, Forget Me and Revenge of the Red Club. She is also the author of the Sleuth or Dare and Gamer Squad series. She lives in Massachusetts with her husband and son. When not writing, she’s most likely reading, watching one of her favorite TV shows, or fantasizing about her next vacation.

Revenge of the Red Club

By Kim Harrington
PRICE MAY VARY BY RETAILER