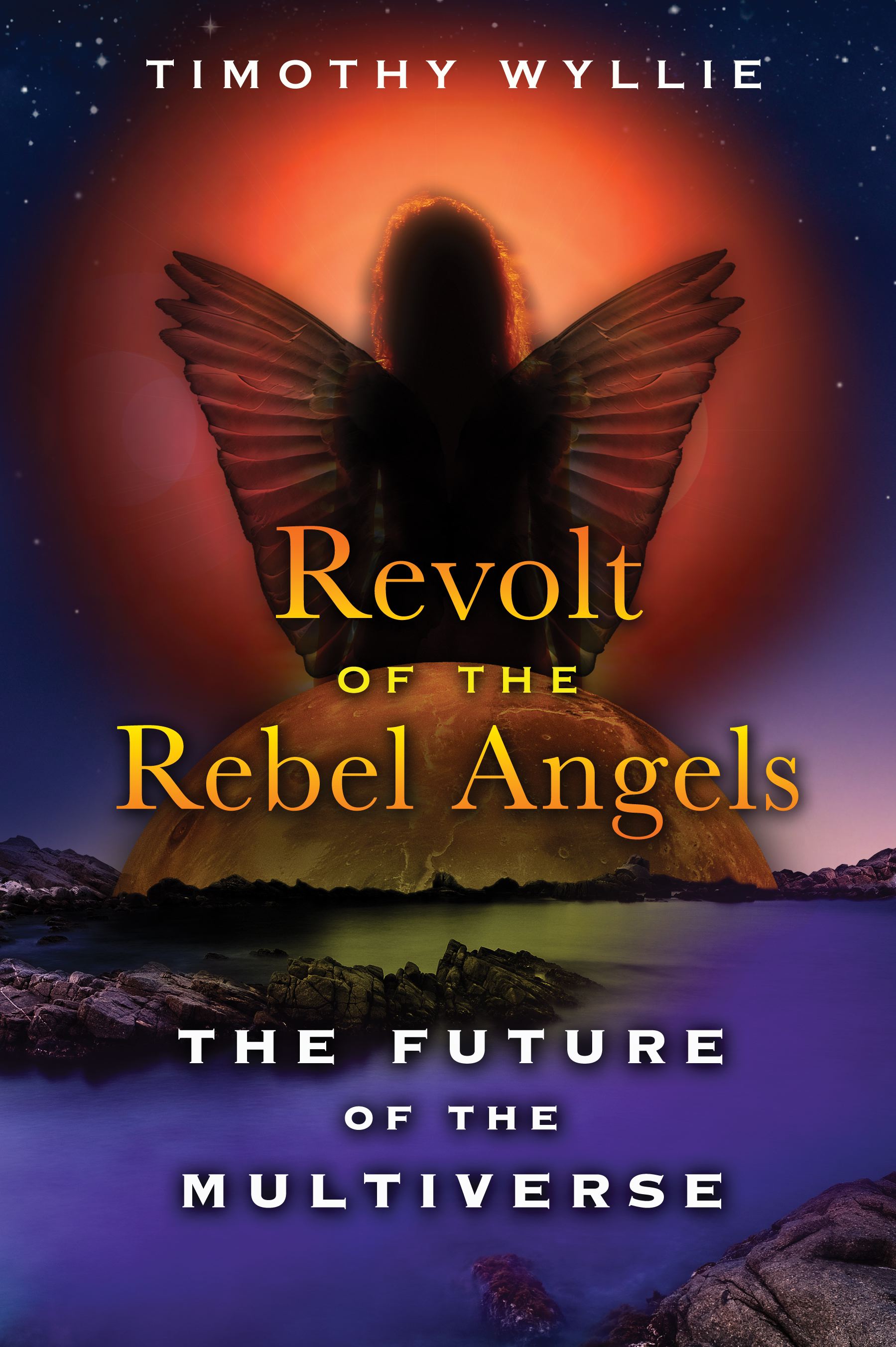 Revolt of the Rebel Angels

The Future of the Multiverse

A rebel angel’s perspective on the Lucifer Rebellion 203,000 years ago and her insight into its past and future effects on consciousness

• Explores how the angelic revolt led to Earth’s celestial quarantine for more than 200,000 years

• Draws parallels between the Process Church and the Lucifer Rebellion

After 200 millennia of celestial quarantine in the wake of Lucifer’s angelic revolt, Earth and the rebel angels isolated here are being welcomed back into the benevolent and caring Multiverse. With this redemption comes a massive transformation of consciousness and a reconnection to our cosmic destiny. But why did the angels revolt and how has that event shaped our planet’s past and its future?

Writing through Timothy Wyllie, rebel angel Georgia shares insights from her half a million years stationed on Earth as a watcher and from her part in the angelic revolution. She reveals details of the Lucifer Rebellion, including the role played by Planetary Prince Caligastia and his team of angelic administrators--thought by some to be the Nephilim or Anunnaki of Sumerian myth--who followed Lucifer into the rebellion, ultimately leading to the quarantine of Earth and 36 other planets. Interweaving her story with events from Wyllie’s life, Georgia draws parallels between Wyllie’s involvement with the Process Church in the 1960s and the events of the angelic rebellion and celestial quarantine. She explores the rise and fall of the island civilization of Lemuria, or Mu, as well as Atlantis and the Maya.

Georgia reveals there are more than 100 million rebel angels currently granted mortal incarnation on Earth at all levels of society and in all countries--most of whom are still unaware of their angelic heritage. Now that we are free of Prince Caligastia’s behind-the-scenes manipulations, the stage is set for the rebel angels to begin redeeming their past and help Earth realize its significance in the wondrous destiny of the Multiverse.

Revenge Served Cold, Lemurian Art and Architecture, the Storm, and Being Kind

As Watchers we’re required to choose our destinations, which, I assume, is part of our preparation for a mortal incarnation. And so it was that before I had much chance to think about reporting back to Caligastia I flew off to Vanu’s Lemurian capital, which was built on one of the larger islands south of the equator.

My first reaction on arriving was one of astonishment. Although I had been to Lemuria before, many things had changed since my last visit. The capital, though not yet fully completed, was a wonder to behold. Built over a series of smaller islands, it was connected by bridges and hollowed out with underwater tunnels and interconnecting canals. Small skiffs skimmed the water--which made me think of water-taxis from another era.

The buildings were massive and seemed to grow naturally out of the sea, which often lapped at their stone skirts. Wide, flat platforms formed of enormous interlocking blocks of granite stretched out into the ocean, with larger boats tied up alongside them and a hive of human activity loading and unloading the goods that traveled between the islands.

Fish of all sizes and species were laid out on the polished obsidian slabs in the open markets and women dressed in brightly colored sarongs, some with pitchers balanced atop their heads, moved in a relaxed flow between the open stalls. People, in general, appeared confident and happy with their lives. Overall, it was a prosperous sight.

As I moved around the city I was struck by the apparent simplicity of life, especially compared to what I’d just been witnessing on Zandana. Although both worlds were roughly parallel in terms of the timing of the emergence of intelligent life and the arrival of their Princes’ missions, Earth’s overall development was badly retarded by the chaos and confusion Caligastia had been sewing since the rebellion. Yet, here in Lemuria I was finding something different, something rather more encouraging. The culture hadn’t yet reached the level of refinement that I saw in the city of Zandan, but neither did the people seem so bewitched by their own self-importance. For instance, whereas the wealthy Zandan citizens built splendid houses and took great pride in their personal possessions, the Lemurians enjoyed living in small huts perched a dozen feet above the water on bamboo poles sunk into the lava and coral.

As I traveled around I found the contrast between the two worlds growing more extreme. The islands of Mu, for example, spread in their thousands in a long chain straddling the equator, had evidently discouraged the growth of cities. The population appeared to be distributed relatively evenly throughout the islands. The only large aggregations of huts were around the three main power centers. These were the rare places where, I was told later, it had been found that the telluric fumes seeping up through volcanic fissures in the rock could produce trance-inducing effects in some people.

The villagers were unaware of the consciousness-altering potential of the fumes that seeped into their huts every once in a while. The fumes didn’t affect everyone in the community; adolescent girls appeared to be most vulnerable. It was a subtle influence, by all accounts, nothing like the group madness that could befall those villagers who, in later ages, unknowingly ate bread infected with the ergot fungus. Here on Mu, there were no hallucinations, no screaming fits, no foaming at the mouth or tearing of hair; nothing to really bother the natural rhythms of the villagers’ lives. It was simply that a few of their young girls would periodically fall into a trance and some would even speak in strange riddles of unknown places.

Lemurian civilization around forty-five thousand years ago was a spiritually charged culture. Much of what might be dismissed as superstition today was intensely relevant to the citizens of Mu. Their connection with Mother Earth and with natural events allowed them access to her secrets. A sudden change of temperature, the direction of the flight of birds, the quality of the wind or rain, the forms of the clouds, the pattern of ripples on the surface of water, the smoke from volcanic vents; all these and more were regarded as signs or portents. Not only was this “superstition” a constant reminder to the Lemurians of their place in the natural order of life, but it permitted a ready interface whereby the midwayers could subtly influence human behavior when required.

If, for example, one of Vanu’s midwayers wished to guide an individual Lemurian in a particular direction to accomplish a task of mutual interest, he’d be likely to work in conjunction with the primary local nature spirits. They, then, might coordinate aspects within their realm so as to ensure, by the flight of birds or the direction of the wind, that the Lemurian would have natural signs to follow.

The Lemurians were evidently still a communal people, frequently living in large extended families, their pole-houses connected by a web of bridges and platforms suspended above the waves. Children played their games, running in and out of the huts and sometimes swinging like monkeys from the rope bridges before dropping, squealing with pleasure and fear, into the water below.

A small group of old men sat on three-legged wooden stools on a suspended platform formed at the nexus of three walkways. I could see they were playing a game of moving colored pebbles through a series of carved, concave indentations in a flat piece of polished wood. There was a lot of excitement and laughter between them, but I didn’t stay long enough to grasp the rules of their game. I was eager to see more of Mu before I had to report back in to Vanu the observations I had made.

“Included as well are the author’s own illustrations as well as some tantalizing tales on the rise and fall of lost civilizations, like Atlantis and the Maya. A massive transformation of consciousness as well as the shape of our planet’s ultimate destiny, will help us to reconnect with our planet as well as ourselves.”

“This book and series is recommended to everyone who is interested in where we have been and where we are going as a planet and as individuals. It will explain a little of what is out there. Once again I can hardly wait for the next volume.”

Revolt of the Rebel Angels

The Future of the Multiverse