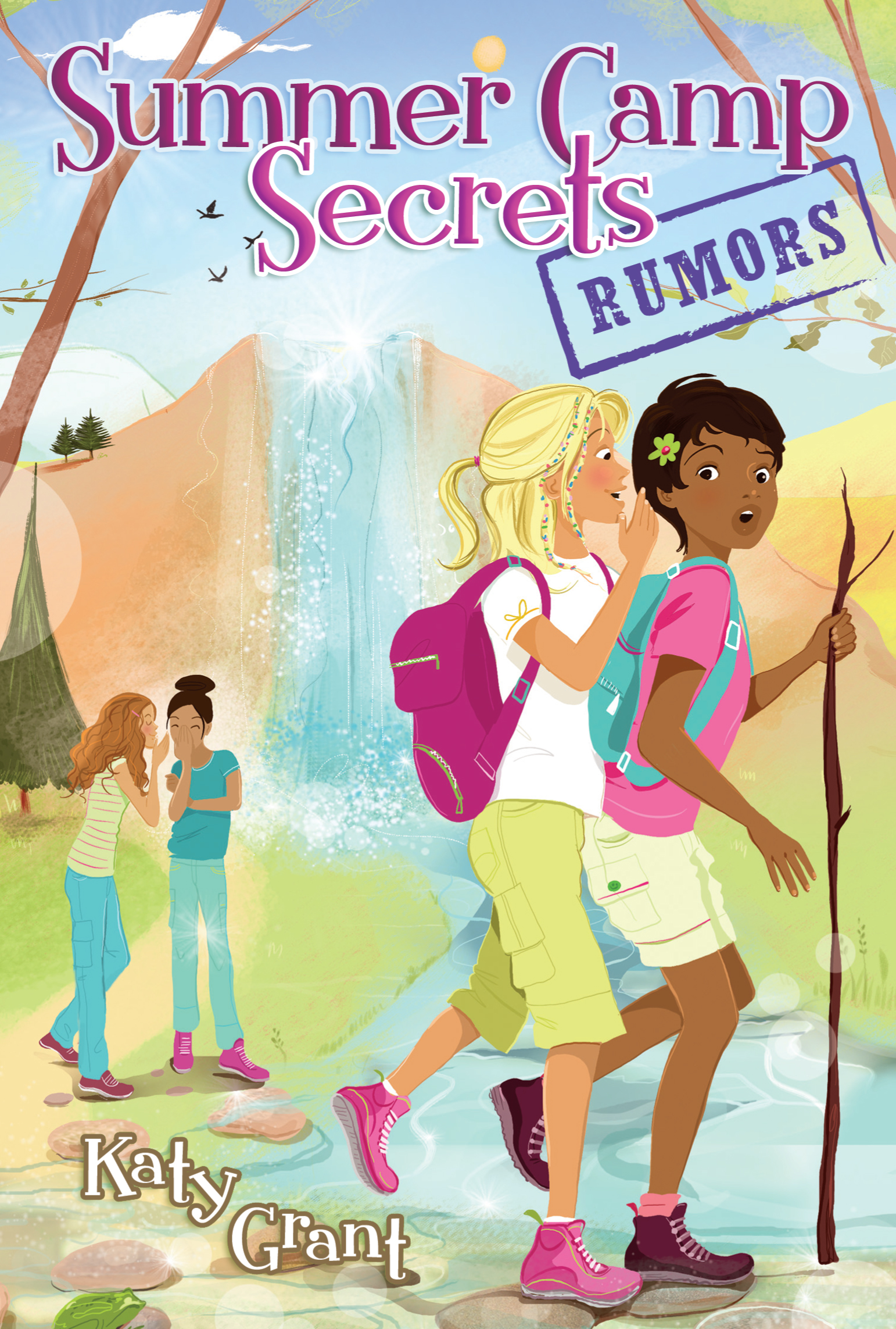 Kayla tries to sort out fact from fiction in Rumors—but sometimes it’s hard to know which of her friends she can really trust! Readers will be delighted with the latest additions to this anthology series of summer camp–based coming-of-age stories.

At least this was only temporary. I was stuck here at this summer camp for four weeks, and then we would move to the new house. I could put up with just about anything for four weeks.

As I looked around, I realized I was the only person standing still while all around me, everyone was moving. Climbing up and down the big hill in front of us. Waving to someone in the crowd. Asking questions or giving directions. Carrying suitcases, pillows, sleeping bags.

A car pulled up, and even before it came to a stop, a girl with long brown hair threw open the back door and jumped out. Two other girls ran up and hugged her. “What cabin are you in? Which counselor did we get?” At least some people were happy to be here.

A long line of cars was slowly creeping up the gravel road, and I watched scenes like this over and over. Sometimes the girl in the car got out slowly and looked around. No one ran up to her car and screamed and hugged her, so I could tell she was a new girl, like me. Her parents would stand there for a few seconds looking confused, until one of the counselors in the green shirts would say hello and give them instructions about what to do and where to go.

It reminded me of the time our family was in New York City on vacation, and we went to Grand Central Station and watched all the people coming and going in the big lobby.

But this was North Carolina, not New York. And we weren’t in the city anymore, that was for sure. I couldn’t believe all the nature I was seeing for the first time. Mama and Daddy put Samantha and me on the plane this morning, and as we were coming in for the landing, all I could see were green mountains, trees, and rivers everywhere.

Nearby the camp director and a big group of counselors were busy welcoming parents and girls. A counselor in a green shirt noticed I was by myself and walked up to me. “Hey! Can I help you find anything?”

“Oh, no thanks. I told my little sister to meet me here after she moved into her cabin.”

We were standing under shade trees in front of the dining hall. Behind us was a wooden footbridge across a stream, and hidden behind some trees was a little cabin that looked like it came right out of pioneer times, with a couple of rocking chairs on the porch and flowered curtains hanging in the open windows.

She glanced at the wooden name tag I was wearing around my neck. “Well, Kayla, it’s nice to meet you. I’m Libby. If you have any questions, just let me or one of the other counselors know, okay?”

“Thanks. Actually … is there a piano somewhere that I could practice on a little sometimes?”

“Oh, yeah. There’s a piano in each of the lodges. You can go in there any time during free time and practice.”

She walked off to talk to some other people. Then I noticed Samantha far away at the top of the hill, and when she saw me waving, she started running in my direction. The dozens of beaded braids in her hair were all bouncing as she ran. I’d worn my hair like that when I was younger, but I’d gotten a short haircut for the summer.

Three other girls were running with Samantha. By the time they got to me, they were all out of breath. “This place is so cool!” Samantha announced.

“I don’t like it. I love it! And these are my friends. We’re all in the same cabin. Junior Cabin Two. Gracie, Mary Claire, and Alyssa—meet my sister Kayla. She’s twelve. That makes her a Middler.” We’d just found out that there were three different age groups here at Pine Haven.

Alyssa, the one with big teeth and long, dark hair hanging in her eyes, looked me up and down. “Huh. You look older than twelve.”

“Well, I’ll be thirteen in September,” I told her. “Did you get your sheets unpacked and your bed made?” I asked Samantha.

She nodded. “I picked out a top bunk. And I thought there weren’t any bathrooms, but there are. Only they’re not inside the cabins. There’s this other building with faucets on one side and bathroom stalls on the other.”

“We found out the name for the bathrooms is ‘Solitary.’ Isn’t that weird?” asked Gracie, the smallest girl, with bright red hair. She was holding Samantha’s hand.

“And we’re the first ones to get moved into our cabin. Every cabin has eight girls and two counselors. So four more girls aren’t even here yet. But the four of us are already friends, and we just met ten minutes ago!”

Samantha was so excited she bounced up and down on her toes. I was glad she was fitting right in, but there was something I wanted to warn her about.

“Can I talk to you for one second?” I reached for her arm and led her down the path a little ways.

“Now what?” she groaned. “My friends are waiting for me.”

I sighed. “I want you to have fun here and everything, but remember one thing, okay? We’re only at Camp Pine Haven for a short time. Then we move to the new house.”

It wasn’t the first time we’d moved, and it probably wouldn’t be the last. I just didn’t want Samantha getting all attached to these girls she might never see again.

Samantha’s mouth opened in amazement, and her forehead wrinkled up. “What do you mean, a short time? We’re here for a whole month!”

“I know. A month sounds like a long time, but it’ll go by fast,” I warned her. I wanted to remind her that practically as soon as she made these friends, she’d be saying good-bye to them and starting all over again.

“I’m glad you’re meeting some other girls, but …”

“But what?” She glared at me with her dark brown eyes.

What was I supposed to tell her? Don’t bother to make friends because we’re just passing through? You think these girls are your new best friends, but next year you might not even remember what they look like?

“But don’t forget that I’m your sister, and I’m your real best friend,” I said finally. I tried to hug her, but she slipped out of my arms and danced backward a few steps.

“Okay. Whatever!” she said, shaking her head and making her braids bounce. She didn’t like it when I got too affectionate with her.

She ran back to Gracie and grabbed her hand. “Come on. Let’s go explore the rest of the camp.” And she was off with her new friends without looking back.

I just hoped she wouldn’t be too upset when camp was over. Friends come and go, but family is forever. That was one thing I’d learned from all the times we’d had to move. Maybe Samantha would learn that lesson soon. The sooner she figured that out, the better off she’d be.

I hadn’t met one single person yet, and I was fine with that. It wouldn’t be hard to go without friends for a month. I could put up with just about anything for a month.

Except maybe an earache and lima beans.

Katy Grant was born and grew up in Tennessee, and spent five summers at a girls' camp in North Carolina, first as a camper and then as a counselor. She now lives in the Phoenix metropolitan area with her husband and sons, where she teaches college and university classes in writing and children's literature.