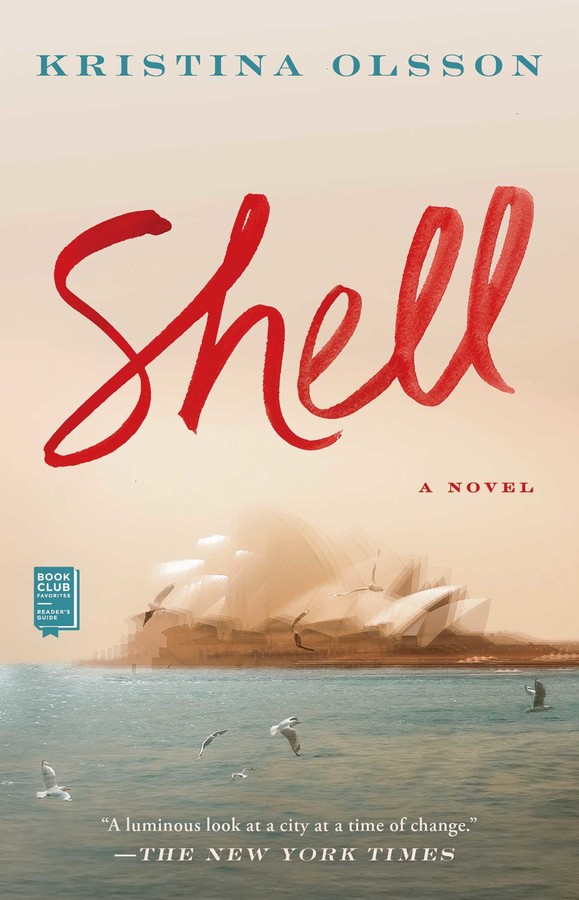 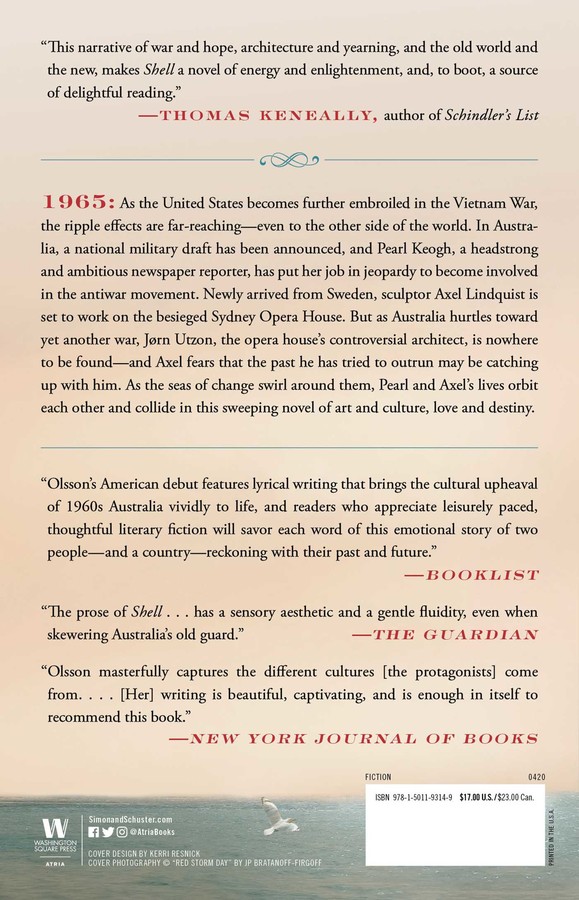 In this “luminous” (The New York Times) historical novel—perfect for fans of All the Light We Cannot See and The Flamethrowers—a Swedish glassmaker and a fiercely independent Australian journalist are thrown together amidst the turmoil of the 1960s and the dawning of a new modern era.

1965: As the United States becomes further embroiled in the Vietnam War, the ripple effects are far-reaching—even to the other side of the world. In Australia, a national military draft has been announced and Pearl Keogh, an ambitious newspaper reporter, has put her job in jeopardy to become involved in the anti-war movement. Desperate to locate her two runaway brothers before they’re called to serve, Pearl is also hiding a secret shame—the guilt she feels for not doing more for her younger siblings after their mother’s untimely death.

Newly arrived from Sweden, Axel Lindquist is set to work as a sculptor on the besieged Sydney Opera House. After a childhood in Europe, where the shadow of WWII loomed large, he seeks to reinvent himself in this foreign landscape, and finds artistic inspiration—and salvation—in the monument to modernity that is being constructed on Sydney’s Harbor. But as the nation hurtles towards yet another war, Jørn Utzon, the Opera House’s controversial architect, is nowhere to be found—and Axel fears that the past he has tried to outrun may be catching up with him.

As the seas of change swirl around them, Pearl and Axel’s lives orbit each other and collide in this sweeping novel “that brings the cultural upheaval of 1960s Australia vividly to life, and readers who appreciate leisurely paced, thoughtful literary fiction will savor each word of this emotional story of two people—and a country—reckoning with their past and future” (Booklist).

This reading group guide for Shell includes discussion questions and ideas for enhancing your book club. The suggested questions are intended to help your reading group find new and interesting angles and topics for your discussion. We hope that these ideas will enrich your conversation and increase your enjoyment of the book.

1. The title, Shell, most obviously refers to the shell-like shapes of the Sydney Opera House, but we see the image and concept of shells appear with many meanings and contexts at various points in the book. Look at some examples of moments when Axel or Pearl mention shells. What are the main themes that shells evoke for these characters? Do any of these interpretations of shells affect how you see the Sydney Opera House?

2. Apart from shells, there are other visual motifs that run throughout the novel, such as water and birds. Which other repeated images most struck you as you were reading? What were the thematic effects of these motifs—that is, how did they convey certain themes or affect the tone of the narrative?

3. Axel describes how the climate of Sweden “made him different” (p. 15). Do you agree that where you grow up—the weather, natural landscape, architecture—shapes who you are as a person? If so, what are some examples you see in your own life?

4. How do Axel and Pearl’s story lines parallel each other? How do their scenes together illustrate their different approaches to the similar emotional challenges of their lives? Do you think their connection influences their development over the course of the novel—and if so, how?

5. How does the Keogh family’s class background and understanding of dignity affect Pearl and her brothers? Where else in the novel do we see these ideas resonate?

6. Axel and Pearl both experienced the loss of a parent in their childhood. How did these pivotal and traumatic experiences influence their adult lives in similar ways, and in what ways did it affect them differently? To what do you attribute these differences?

7. Desmond Tutu famously said, “If you are neutral in situations of injustice, you have chosen the side of the oppressor.” How does this quotation relate to Axel’s understanding of Sweden’s neutrality in World War II?

8. Pearl makes a distinction between the Vietnam War, which she considers “all politics,” and World War II, which she believes was “a moral imperative” (p. 183). Do you think this is a valid distinction? If a nation’s involvement in a war is not for self-defense, how do you distinguish between unnecessarily going to fight in someone else’s war—a criticism leveled against Australia’s involvement in conflicts in the twentieth century—and getting involved out of a moral duty?

9. In the final chapter, beginning on page 247, the glasswork piece that Axel has been working on throughout the novel is described for the first time. Were you surprised to learn what he had created? If so, why?

1. Using some of the poetic turns of phrases in Shell, craft a “found poem” inspired by the novel. A found poem is written by taking words, phrases, or whole passages from an existing text (in this case, Shell) and creating new meaning by combining quotes, shifting the order, adding line breaks, or deleting text. Feel free to get creative with it, shaping the text to write about the characters or your own life, or even something more abstract!

2. Shell centers on a transitional moment in time, and when the novel ends, much is left unresolved: the Sydney Opera House is unfinished, its status in jeopardy; Axel and Pearl are to be separated as Axel returns home to recover; his glasswork is damaged and may or may not be fixed; and the Vietnam War rages on. Why do you think Kristina Olsson chose to end her novel on this moment of uncertainty? Regarding Axel and Pearl, what do you envision their futures will hold? With your reading group, consider writing a short story from Axel or Pearl’s perspective (or both!), set either one year or five years after the end of Shell.

3. As with the Sydney Opera House, the Statue of Liberty in New York Harbor is a famous landmark designed by someone foreign to the country that the work seeks to represent (the Statue of Liberty was designed by French sculptor Frédéric Auguste Bartholdi). Do you think there is insight that only a native resident can bring to monumental landmarks like these, or, alternatively, is there a benefit to seeing them from an outsider’s perspective? With your group, discuss some of your own favorite landmarks. How well do you think they capture the spirit of their location? 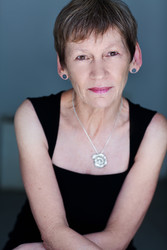 Kristina Olsson is a journalist and the award-winning author of the novels Shell, In One Skin, and The China Garden, and two works of nonfiction, Boy, Lost: A Family Memoir and Kilroy was Here. She lives in Brisbane, Australia.

“A luminous look at a city at a time of change, a time when the building of the Sydney Opera House was a reach for greatness.”

"Olsson masterfully captures the different cultures [the protagonists] come from...Olsson’s writing is beautiful, captivating, and is enough in itself to recommend this book."

"A beguiling, original, and beautifully written imagining of Sydney of the sixties. "

“A beautifully crafted novel about a fascinating time in our history. There is a luminous precision in every sentence.”

– Heather Rose, award-winning author of The Museum of Modern Love

“This narrative of war and hope, architecture and yearning, and old and new world, makes Shell a novel of energy and enlightenment, and, to boot, a source of delightful reading.”

– Thomas Keneally, author of Schindler's List and In the Name of the Father

"War, architecture, guilt, salvation, politics – this book has a little bit of it all...A fascinating look at Australia during the Vietnam War, the creation of the Sydney Opera House, and the ever-present battle between the violence of war and the beauty of art. Recommended."

"Olsson's subtle and nuanced tale displays how deeply the past—or at least one's perception of it—informs life in the present."

"Olsson's American debut features lyrical writing that brings the cultural upheaval of 1960s Australia vividly to life, and readers who appreciate leisurely paced, thoughtful literary fiction will savor each word of this emotional story of two people—and a country—reckoning with their past and future."

"A contemplative story of personal guilt and political upheaval."

"The prose of Shell has a sensory aesthetic and a gentle fluidity, even when skewering Australia’s old guard."

"Shell is a masterful novel. Olsson brings to vivid life a country at the precipice of self-awareness, at a moment of intellectual and ethical schism that will define its place in the wider world, and she does this brilliantly through intensely moving and personal stories of love and loss, of morality and betrayal. As ethereal, shimmering, and magical as the book’s beating heart, the Sydney Opera House, it is fair to say that Shell shares the architectural masterpiece's majesty."

"An ambitious canvas, a complex and provocative novel of ideas."

"The story of the construction of the Sydney Opera House, undeniably one of the 20th century’s great buildings, is one fraught with paradoxes and rich with wider context...this is a novel with a sharp eye, a warm heart and sprawling ambitions, painted on the most splendid canvas of all."

"Like a melody that resonates long after the song ends, Shell is one of those rare books that lingers in the reader’s mind weeks after finishing the final page."

"Kristina Olsson is such a graceful, wise and perceptive writer. The woman’s massive heart is one big literary taproot feeding all of us answers about the Australian condition."

Praise for The China Garden:

"Olsson is a gifted writer with considerable verbal flair."

"Olsson’s transformational novel is as inspiring, as moving, as elevating as Utzon’s transformational edifice. In its honoring and celebration of people, place, and principle, Shell sanctifies the greatest of our ideas and being, from love, courage and betrayal to creation and dissent. This book carried me along through stunning sentences to a space beyond of beauty and sadness, the potential of art, and the most moving of human intentions. It’s the kind of book that opens out its readers, making them think and feel. It’s the kind of book I’ll carry with me for all time."

"Olsson takes her time with this story, the characters are lovingly developed, the story carefully unfurled. The landscape and weather are also perfectly captured and are an integral part of the novel, almost as characters in their own right."

"A heartwarming and realistic tale."