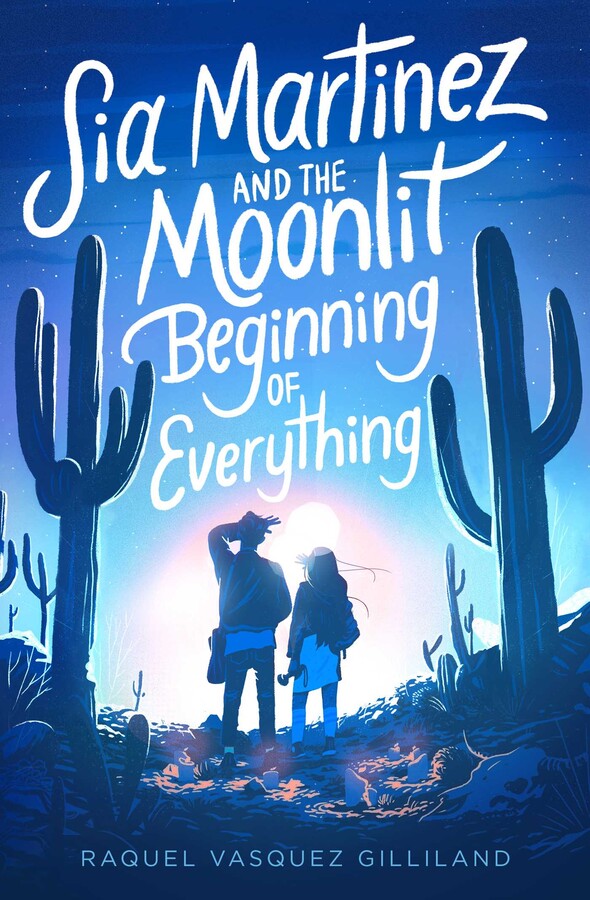 Sia Martinez and the Moonlit Beginning of Everything

By Raquel Vasquez Gilliland
PRICE MAY VARY BY RETAILER

“In a world where we are so often dividing ourselves into us and them, this book feels like a kind of magic, celebrating all beliefs, ethnicities, and unknowns.” —The New York Times Book Review

Aristotle & Dante Discover the Secrets of the Universe meets Roswell by way of Laurie Halse Anderson in this astonishing, genre-bending novel about a Mexican American teen who discovers profound connections between immigration, folklore, and alien life.

It’s been three years since ICE raids and phone calls from Mexico and an ill-fated walk across the Sonoran. Three years since Sia Martinez’s mom disappeared. Sia wants to move on, but it’s hard in her tiny Arizona town where people refer to her mom’s deportation as “an unfortunate incident.”

Sia knows that her mom must be dead, but every new moon Sia drives into the desert and lights San Anthony and la Guadalupe candles to guide her mom home.

Then one night, under a million stars, Sia’s life and the world as we know it cracks wide open. Because a blue-lit spacecraft crashes in front of Sia’s car…and it’s carrying her mom, who’s very much alive.

As Sia races to save her mom from armed-quite-possibly-alien soldiers, she uncovers secrets as profound as they are dangerous in this stunning and inventive exploration of first love, family, immigration, and our vast, limitless universe.

Raquel Vasquez Gilliland is a Mexican American poet, novelist, and painter. She received an MFA in poetry from the University of Alaska, Anchorage in 2017. She’s most inspired by fog and seeds and the lineages of all things. When not writing, Raquel tells stories to her plants and they tell her stories back. She lives in Tennessee with her beloved family and mountains. Raquel has published two books of poetry. She’s the author of Sia Martinez and the Moonlit Beginning of Everything and How Moon Fuentez Fell in Love with the Universe.

“In a world where we are so often dividing ourselves into us and them, this book feels like a kind of magic, celebrating all beliefs, ethnicities, and unknowns.” —The New York Times Book Review

“Gilliland weaves sci-fi and magic into a stunning contemporary story that sticks with you long after the first time you read it.” —BuzzFeed

“Magic dances on each page, along with love, heartbreak, and so much more. It’s a book unlike any other, one that even if you know how it ends, you’ll still be surprised.” —Culturess

“Luminous, genre-bending, and out of this world.” —Kirkus Reviews, starred review

“Impressively fluid. . . Sia is a complex and memorable protagonist who draws on all of the best parts of herself and her loved ones to grow, adapt, and overcome her losses.” —BCCB, starred review

“Amid the surprising plot twists is a thoughtful exploration of humanity, emphasizing that, though no one is perfect, no one is beyond redemption, either.” —Booklist

“Gilliland uses lush descriptions of setting and desert imagery paired with lively dialogue to craft a story that blends science fiction with Mexican folklore, all within a contemporary young adult novel that explores grief, friendship, immigration, consent, and the powerful bond between mother and daughter.” —SLJ

“The book teems with vivid imagery and explicit social commentary. . . . Vasquez Gilliland skillfully sows the seeds of science fiction and magical realism early in the story, and like Sia’s maíz, they have been waiting for just the right time to bloom.” —BookPage

"Sia’s story is a startlingly beautiful blend of so many things: mythology, spirituality, and the stark realities of racism and deportation in the U.S.; coming of age and first love; and all the best pop-culture sci-fi. And aliens! And a kick-ass girl full of heart! You’ll believe in these characters, and in the wonders around them. Go, Sia!" —Kristin Cashore, New York Times bestselling author of the Graceling Realm series and Jane, Unlimited

Sia Martinez and the Moonlit Beginning of Everything

By Raquel Vasquez Gilliland
PRICE MAY VARY BY RETAILER