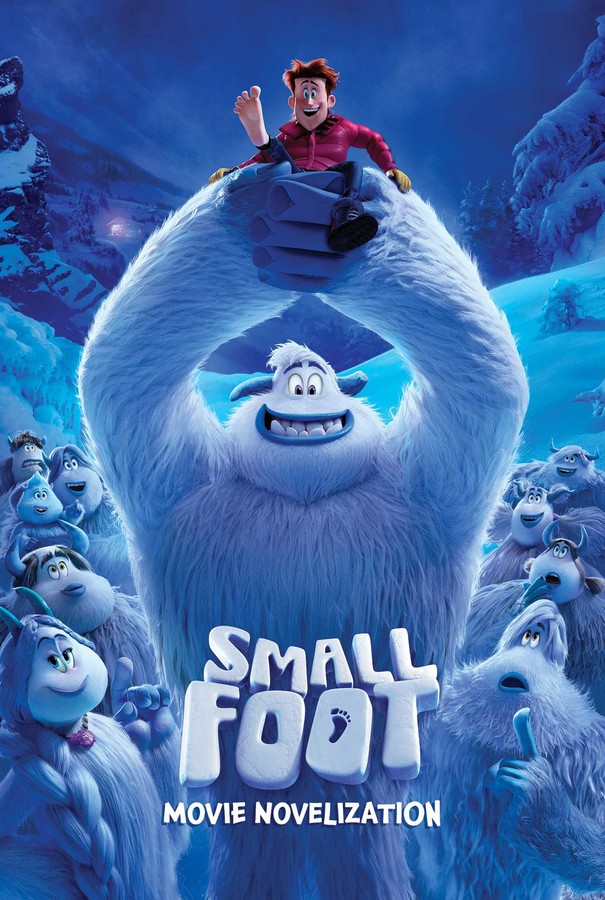 Yeti or not, here they come! Don’t miss this novelization based on the new big-screen animated adventure Smallfoot, from Warner Bros. Pictures.

Smallfoot turns a legend upside down when a bright young Yeti finds something he thought didn’t exist—a human! News of this “Smallfoot” throws the Yeti community into an uproar over what else might be out there in the big world beyond their snowy village. Smallfoot is an all-new animated story about friendship, courage, and the joy of discovery. Fans of the movie will love reading this hilarious retelling with a full-color insert, including stills from the film.

Smallfoot Movie Novelization Chapter One Doing What the Stones Say
The last grains of sand trickled from a bottle and fell onto a small wood lever that dropped on one end, raising a feather that tickled a hairy foot. The foot belonged to Migo’s father, Dorgle, who was asleep in bed, until the feather tickled him. He woke up and clapped twice, and fuzzy yellow snails puffed up and glowed, lighting up the room.

He jumped out of bed and walked past his son’s room.

The sound of his father’s voice startled the young Yeti awake. He sprang up, ready for action. Over the years he had grown to the size of a young pine tree. Shaggy white fur covered his body, from the top of his head down to the tips of his blue toes. Blue horns stuck out from the sides of his head, and when he yawned, his mouth opened to reveal enormous teeth.

Dorgle was a head shorter than Migo, but wider and furrier, with an impressive fur mustache. As Migo followed him out of the cave, more snails lit up the darkness with their natural glow. But Migo knew it wouldn’t be dark for much longer. He and his father had an important job to do.

They walked out onto a platform that looked out over the Yeti village. The other Yeti were still in their caves, waiting for the day to dawn.

Migo put a helmet on Dorgle’s head, which was flat across the top, rather than pointy like his own. Then he strapped a harness to his father’s chest. Dorgle climbed into a wooden seat that was part of a catapult-like contraption sitting on the platform. Migo began to turn a large paddle wheel that was attached to the seat by a rope. As Migo cranked, Dorgle’s seat slowly moved backward.

“Dad, I was thinking,” Migo said. “Gong Ringer is, like, a really important job, isn’t it?”

“It might be the most important,” Dorgle replied proudly.

“More than Stonekeeper?” Migo asked. “He’s the leader of the whole village.”

“But if I don’t ring the gong, the Great Sky Snail won’t rise and bring light to the village,” Dorgle pointed out. “And then everyone would be in the dark, including . . .”

Migo gasped. “The Stonekeeper! And he can’t do his job in the dark!”

Migo released a lever, and the seat lurched forward, sending Dorgle flying. With perfect aim he flew through a hoop at the end of the platform and then soared over the village to his target—a huge metal gong. He hit it headfirst, and dropped to the ground.

The sound of the gong rang through the village and bounced off the mountain peaks. Dorgle got up, shaking his head, and looked hopefully at the horizon. From the platform Migo did the same.

Very slowly the rays of light began to shine in the sky.

Migo couldn’t wait until it was his turn to bang the gong and wake the village. For now, he was happy to be helping his dad. He hopped off the platform and slid down into the village using his big Yeti feet like a pair of skis.

Snail lights were starting to come on in every cave as the Yetis woke up and got ready for a busy day. They popped their heads out of windows and doors to greet the morning light—and Migo, as he sailed past them.

Migo passed by a tall tower. At the very top, Yetis rode in a circle on unicycles, turning a wheel that made the tower spin around and around.

As the wheel spun, a pulley lifted up a block of ice—with a Yeti attached to it by his frozen tongue! The pulley dropped the Yeti—and the ice chunk—onto the top of a platform. Then the Yeti pulled his tongue off the ice block and walked away to join a group of Yetis striking an ice cliff with pickaxes.

Migo watched as a different Yeti jumped onto a chunk of ice and rode down the ice cliff, like an extreme athlete on a snowboard. She zoomed past other Yetis all doing the same thing.

When they reached the bottom of the cliff, the ice chunks had turned into smooth balls. The snowboarding Yetis dropped the ice balls off at a giant pile, where other Yetis polished them with their fur.

Migo smiled. “Looks like it’s going to be another perfect day.”

He slid down the main street of the village and skidded to a stop in front of an ice pop stand, where his dad waited for him.

Frigg gave him the ice pops. Dorgle gave one to Migo, who ate his. Dorgle applied his ice pop to his aching head.

Frigg turned to Migo and asked, “Isn’t today the day?”

“Yep!” Migo replied. “Just need a thumbs-up from the Stonekeeper after my practice run, and then I’m officially the assistant Gong Ringer!”

Erp, the village stonecutter, approached. “That’s why you’ll need this, Migo,” he said, handing him a shiny new helmet.

He walked up the path back home, humming a happy tune. Along the way he passed some cute toddler Yetis skating on the ice, using their big feet as skates just like Migo did.

Soozie barreled down a hill and hit a ramp that launched her into the air. She landed on a shop awning, bounced off, and crashed into Migo. He laughed.

“Well, the helmet works,” he said, standing up and helping the young Yeti up from the ground.

He marched down the street with the little toddlers at his heels. They walked past a huge pile of the polished ice balls. On the hill above, a group of Yetis were sending the ice balls shooting down a slide made of ice.

Migo picked an ice ball up from the pile, and the toddlers did the same. Then they got in line with other Yetis holding ice balls. When it was Migo’s turn, he dropped his ice ball into the mouth of a large statue.

Just then, Gwangi popped out from behind the statue. He had grown into an enormous Yeti with a round head and body with purple shaggy fur.

“Do you ever ask yourself why we do this?” Gwangi asked. “Something’s going on. I hear noises from deep within the mountain.”

“The Mountain Mammoths,” Soozie said. She already knew the stories of the stones.

Next, Kolka popped out from behind the statue.

“Mountain Mammoths? And you believe that?” Kolka asked.

Gwangi’s eyes narrowed. “All part of the cover-up.”

The kids looked at Gwangi and Kolka, wide-eyed. Migo swept them up and moved them away.

“Hey, kids, don’t listen to them,” Migo said. He stopped and lowered his voice. “They’re a little weird.”

Soozie looked back at Gwangi. “What’s he saying about a cover-up?”

“Whoa, whoa. No, guys!” Migo cried. “You’re questioning the stones, and you can’t do that!”

Soozie frowned, and Migo understood her skepticism a little bit. But he’d learned long ago that there was no point in asking questions.

“When you have a question, just stuff it down inside,” he advised. “We can make it a game! Let’s try it!” He took a deep breath and motioned pushing something down.

The little Yetis copied him.

“Great!” Migo said. But maybe it isn’t so great, he thought.

The toddlers followed him as he continued his walk, deep in thought. Over the years he must have dropped thousands of ice balls into that statue’s mouth. And thousands of times he’d wondered why he was doing it. And every time he’d asked, he’d gotten the same answer. . . . Because the stones say so!

And so he buried his questions deep inside, like he’d shown the kids how to do. It was a lot easier to just enjoy the beautiful day and the beautiful snow and not think about why things were the way they were.

“What could be better than this?” Migo asked, looking around the village. “It’s perfection!”

“No it’s not,” said Fleem, who was still shorter than all the other Yetis his age. Migo ignored him.

Kolka appeared next to him. “There’s gotta be more,” she said, and Migo just kept walking.

Then Gwangi bounded up to them. “We should be asking more questions,” he said, and Migo steered the toddlers away from him again.

“Ignore them,” he told the kids, wanting to protect them. “Look around us. The ice is glistening. Everybody is busy and happy doing their jobs. Life really is perfect!”

His words echoed down the street, and he closed his eyes, because he knew if he said it enough, and said it loudly, it almost felt like things really were perfect.

Almost . . . , repeated a little voice inside his head, and he did what he always did. He pushed it down, and he kept going.

More books in this series: Smallfoot