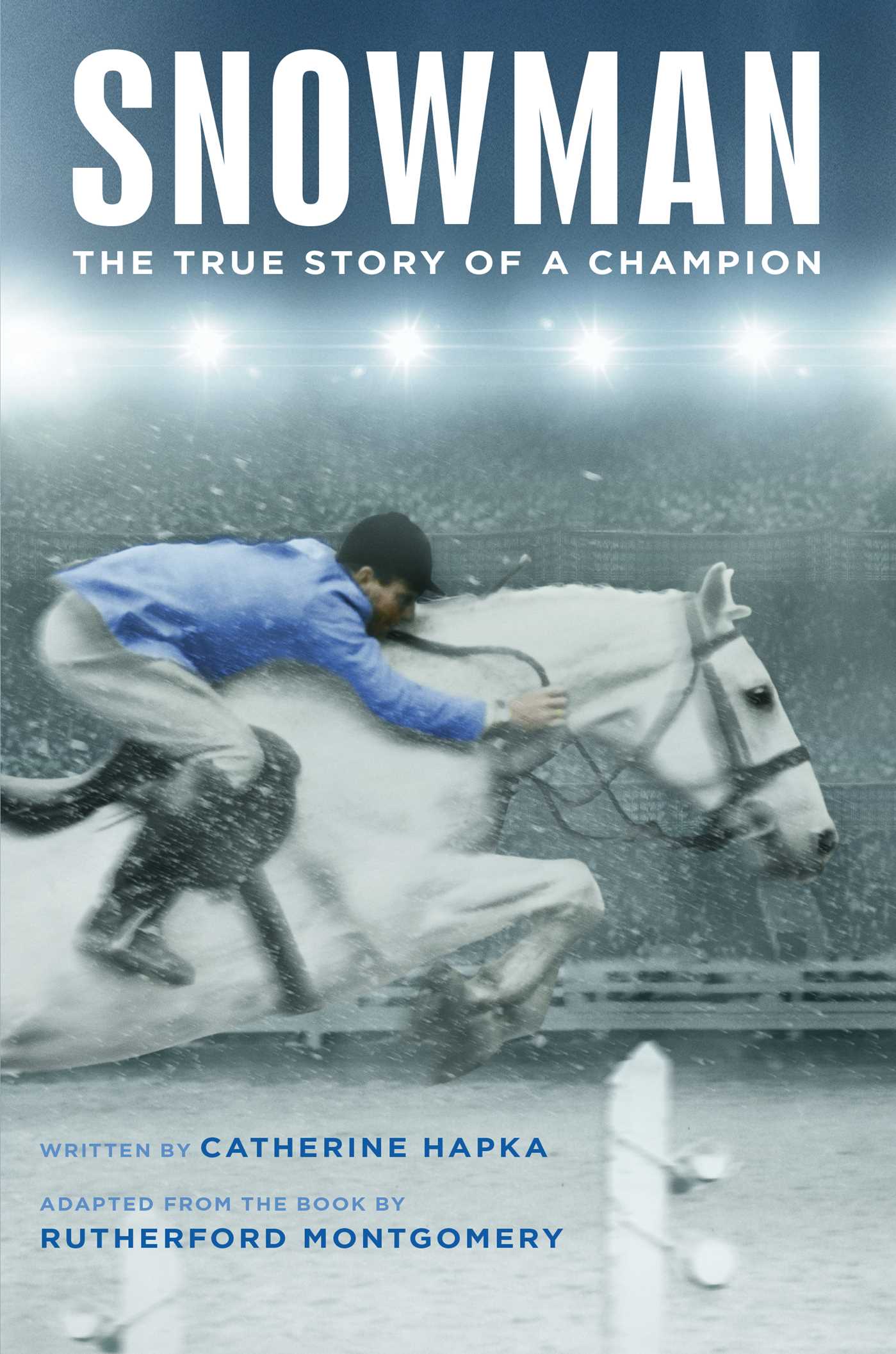 The True Story of a Champion

A twist of fate brings a man and horse together in this remarkable true story now available in a new version adapted by the author of the Marguerite Henry’s Ponies of Chincoteague series.

Snowman, an Amish plow horse, was bound for the meat market when Harry deLeyer, a Long Island riding instructor, spotted him at auction. After making eye contact with the gentle giant deLeyer decided to purchase him for $80.

At first, Snowman was just a horse that children rode during lessons, but when deLeyer sold him to a neighbor, the horse had other ideas. He would jump the high fences so he could return “home.” Harry then began training Snowman as a show jumper. Less than two years out of the plow fields, Snowman won the 1958 horse show jumping Triple Crown—the American Horse Shows Association Horse of the Year, Professional Horseman’s Association Champion, and Champion of Madison Square Garden’s Diamond Jubilee.

Snowman was inducted into the Show Jumping Hall of Fame in 1992.

The gray horse lifted his head from the trough where he’d been searching for stray scraps of hay. A slender teenage boy dressed mostly in black was hurrying toward the horse’s head.

“Come on, big fella,” the youth said, giving a yank to loosen the knot in the rope tying the gelding to the rail over the trough. Then he grabbed the horse’s worn halter and gave a cluck and a tug. The clip on the ratty halter dug into the horse’s face, but the gray gelding gave no protest. He was used to the small aches and pains of hard work and careless handling.

The horse followed without hurrying as the youth dragged him along the aisle of the auction barn. When the gray gelding had arrived, the place had been packed with horses of all shapes and sizes, tied side by side along both walls. People had wandered along the sunken walkway in between, occasionally stepping closer to lift a horse’s hoof or to flip its lip up to look for a tattoo and to check its teeth. None of the people had bothered the gray horse, however. And now, hours later, the aisle was nearly deserted.

Boy and horse turned the corner into the center part of the building, where the horse fell into step behind four others, all workhorses like him but mostly much older and stoutly built, with the thick legs and massive necks of draft animals. One of the big drafts had a badly galled shoulder, and a black gelding’s back was swayed from hard work and old age. All four showed ribs through their shaggy, unkempt coats.

The gray was showing the outline of ribs as well, and clearly hadn’t been groomed in a while. But unlike the others, who plodded along without raising their heads, he looked around with interest, pricking his small ears as he passed through a gate into the narrow sales ring bordered on both sides by tall wooden bleachers. Earlier, this place had been filled with people, too. Now, only a few remained. The gray gelding met the eye of one of them, a stocky man wearing a heavy mackinaw coat and a cloth cap with the earflaps pulled down against the chill of the unheated building. But the man barely seemed to see the gray before turning to look at the rest.

As the gray horse passed him, the man spat a wad of tobacco onto the ground. “Sixty a head,” he called in a raspy voice.

“Sold.” Another man, sitting at the wooden desk overlooking the ring, gathered the papers lying before him. “That’s all, folks.”

“This way.” The youth at the gray’s head tugged again on his halter, leading him back out of the ring with the others. “Sorry, pal, looks like it’s end of the road for you.”

The parking lot at New Holland Sales Stables was already clearing out when Harry deLeyer steered his station wagon past cars, horse trailers, and Amish buggies. A few people were still loading the horses they’d bought, but Harry paid little attention to them. He had been to the auction before and knew how it worked. Every Monday, all year round, people came from near and far to buy and sell horses. There, one could find anything from enormous drafts weary from pulling a plow to sleek, spirited show horses to furry ponies; from high-headed saddlebreds to Thoroughbred ex-racers to horses whose breeding was anybody’s guess. The buyers varied just as much. Amish farmers looking over the plow and buggy horses with a practiced eye. Trainers looking for a lesson horse or show horse at a bargain price. Families looking for an inexpensive pony for the kids. Many of the horses went home with such buyers, while other sales led to the area in the back known as “the kill pen.” That was where the meat buyers kept the horses they purchased, loading them up at the end of the day for one final trailer ride to the canning plant.

That day it was snowy and bitterly cold, and Harry saw one of the meat buyers loading his truck as he pulled to a stop. He grimaced, partly because he knew the fate of the unlucky animals being loaded. It was very different from how he remembered things from his childhood in Holland, where a horse that had served his owners faithfully earned a pleasant retirement grazing in a sunny pasture.

Harry was also disappointed to be arriving at the sale so late. He’d had a flat tire on the long drive down from Long Island, New York. In those days, changing a tire was no simple matter—Harry had had to go to a service station for a new inner tube, which had put him far behind schedule. Now, he could see that the auction was over. That was too bad, since he’d been hoping to find a lesson horse for the stable he’d managed at an exclusive private school, the Knox School for Girls, for the past couple of years.

Still, he’d made the long drive through the snow from his home farm on Long Island all the way here to Pennsylvania. He figured he might as well take a look at what was left.

Harry climbed out of his car and stretched, his blue eyes never leaving the meat buyer’s trailer. When he looked inside, the horses stood empty-eyed and resigned, no longer interested in what was going on around them.

All except one. A gray gelding was looking around, ears pricked. He was just as beat-up and dirty as the others, but there was something about him that caught Harry’s attention—especially when the horse turned and met his gaze. Was Harry seeing things, or had the gelding just winked one big brown eye at him?

“I’d like to look that gray horse over,” he told the meat buyer in his thick Dutch accent, nodding toward the gelding.

Harry merely smiled. “Mind getting him down so I can have a look?”

The buyer shrugged and then unfastened the ramp he’d just latched. He lowered it, and before he could reach for the gray, Harry was inside grabbing the horse by the mane.

The gray gelding stepped down, stumbling halfway and sliding ungracefully to the ground. Harry let go and jumped out of the way. Although the meat buyer had already removed the halters from the horses in his truck, neither he nor Harry was particularly worried that the battered horse would try to run away, and indeed, the gray stood still once he was out.

Harry looked him over carefully. The horse stood a little more than sixteen hands by his estimation, and he was perhaps eight years old or thereabouts. He was solidly built, though certainly no draft horse despite the harness marks across his chest. Harry was surprised to note the small ears—“Arabian ears,” he would call them. Other than those ears, the horse’s best quality seemed to be his large, kind eyes. The rest of him showed the signs of hard work and poor care. His mane and tail were unkempt, and his hooves were chipped and dull, with only one worn-out shoe still clinging on by a couple of nails.

But he wasn’t as thin as some of the horses that ended up in the buyers’ kill pen, and his basic conformation was adequate. Besides, there was just something Harry liked about him. He might not be anything special, but seemed easy-going and quiet, so he might do as a lesson horse for some of the bigger girls at the Knox School. . . .

“How much do you want for him?” Harry asked the meat buyer.

The man looked surprised, but was quick to nod when Harry offered eighty dollars—ten for profit and ten for delivering the horse to Harry’s farm on Long Island.

“You just bought yourself a horse, mister.” The meat buyer grinned, probably thinking that Harry had just paid way too much for a useless horse.

Harry was thinking much the same thing himself. Still, he couldn’t help smiling at the gray gelding as he led him back up the ramp into the trailer.
Catherine Hapka

Catherine Hapka has written more than 100 books for children and adults. She’s written for series as a ghostwriter and has also authored original titles. She lives in Pennsylvania.

The True Story of a Champion

SEE ALL
See more by Catherine Hapka
Thank you for signing up, fellow book lover!