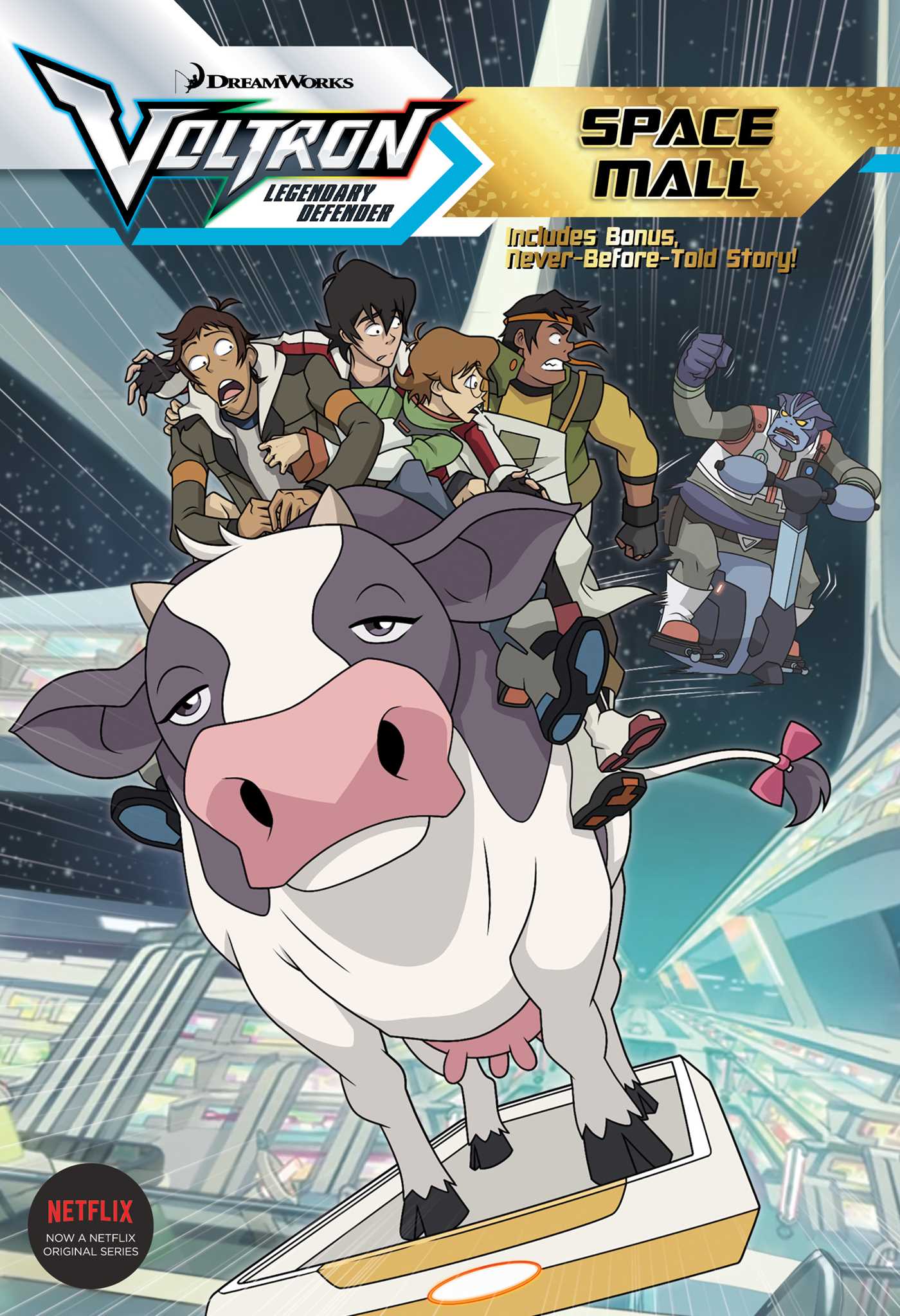 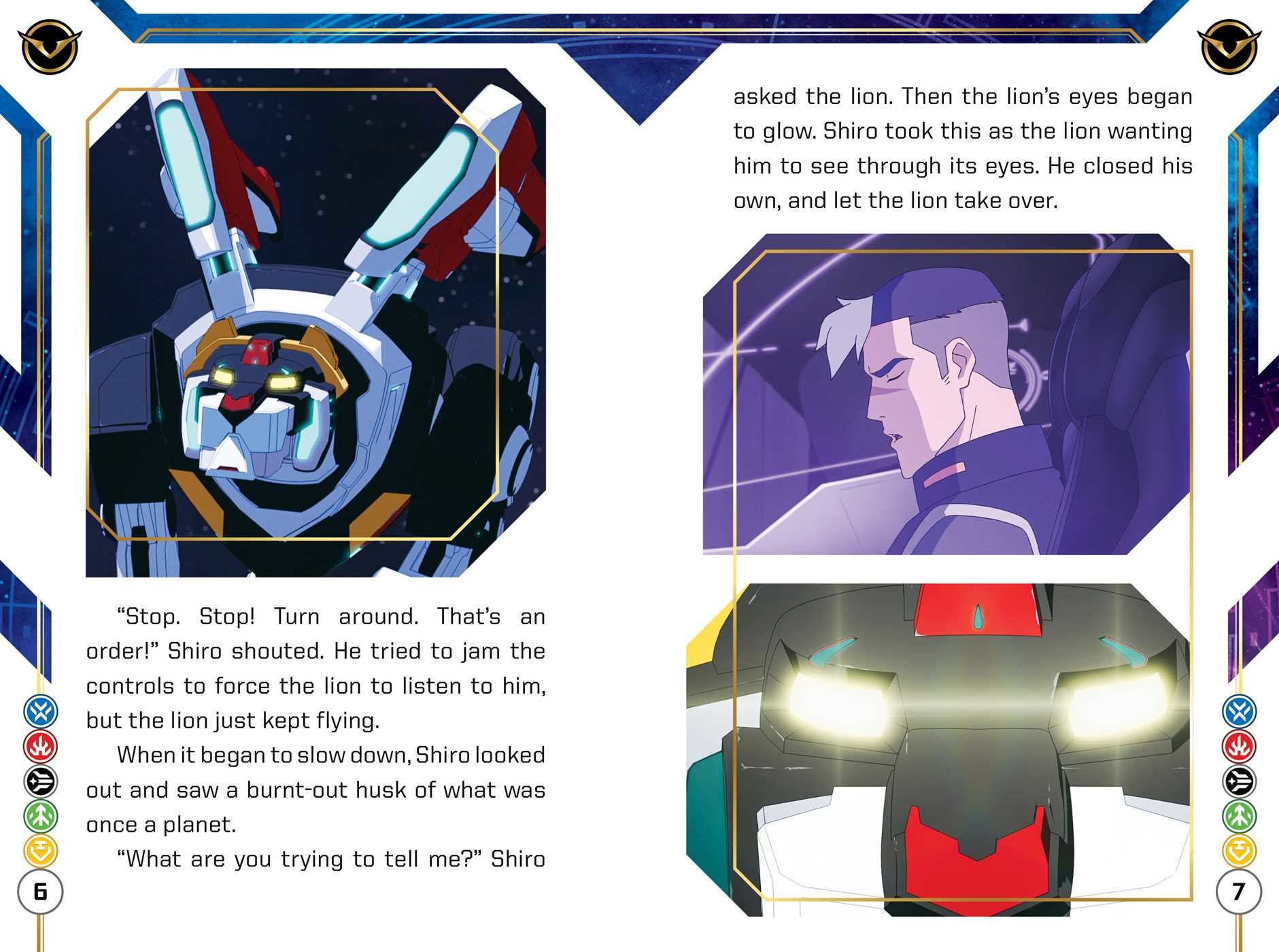 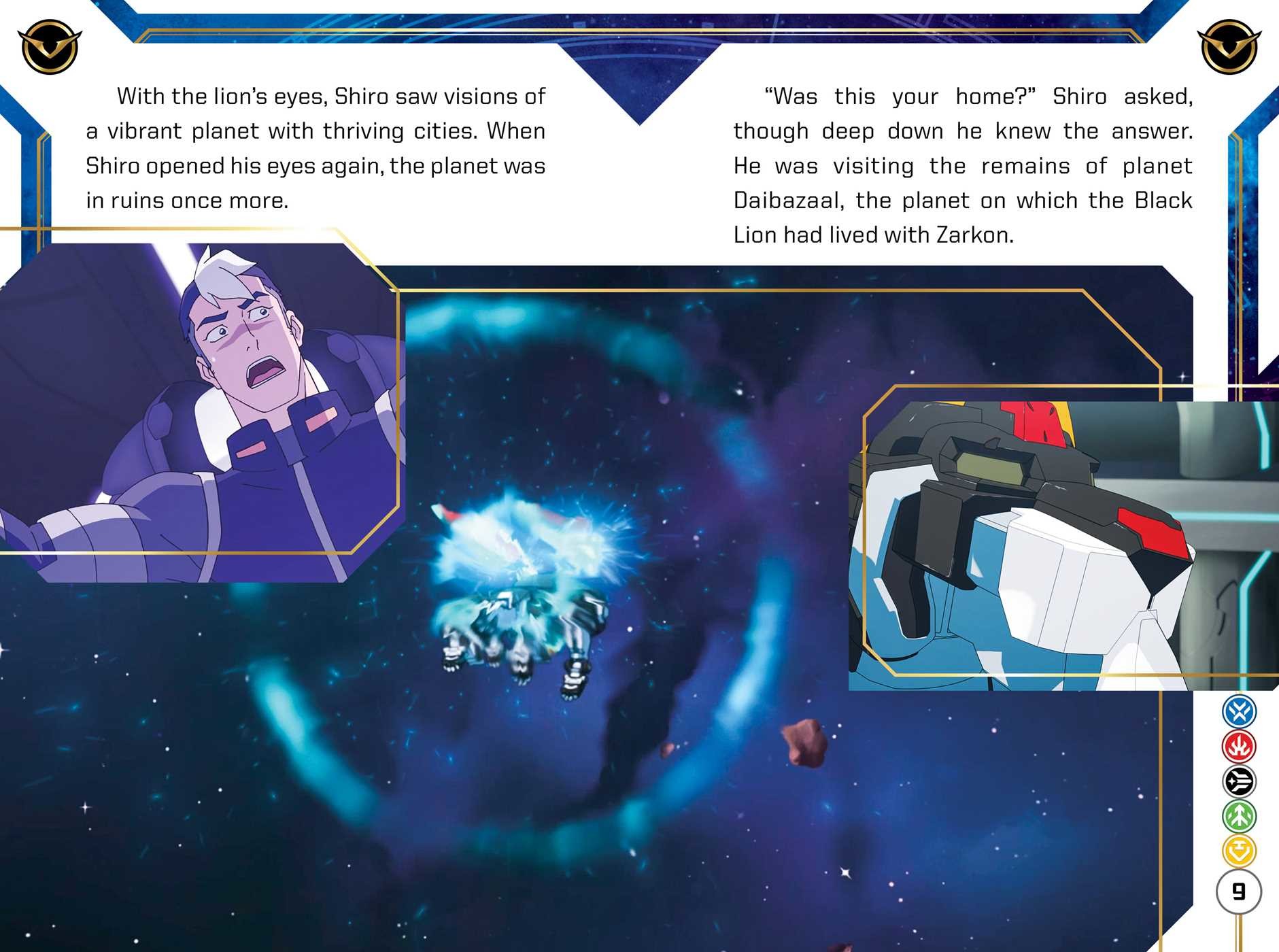 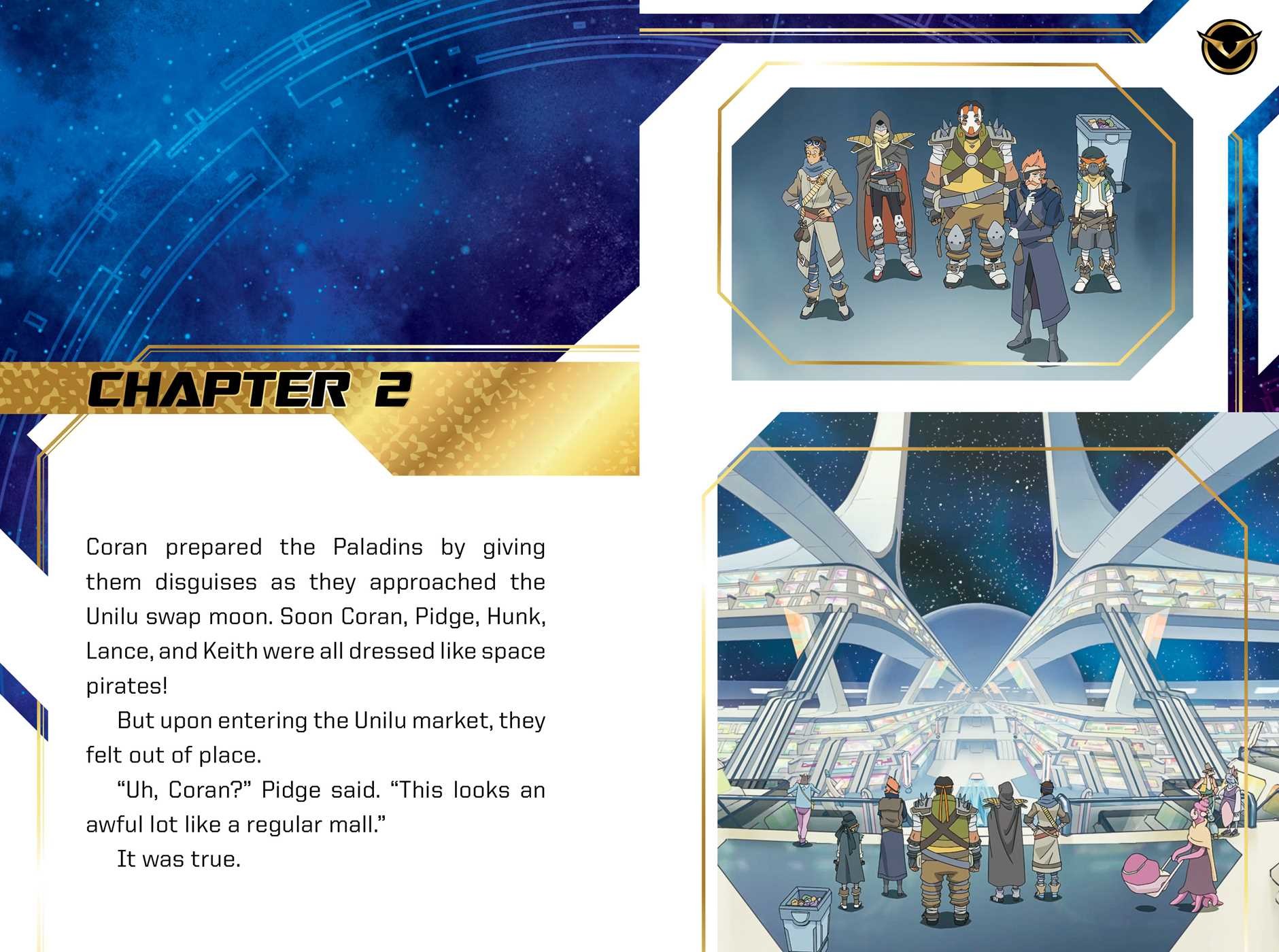 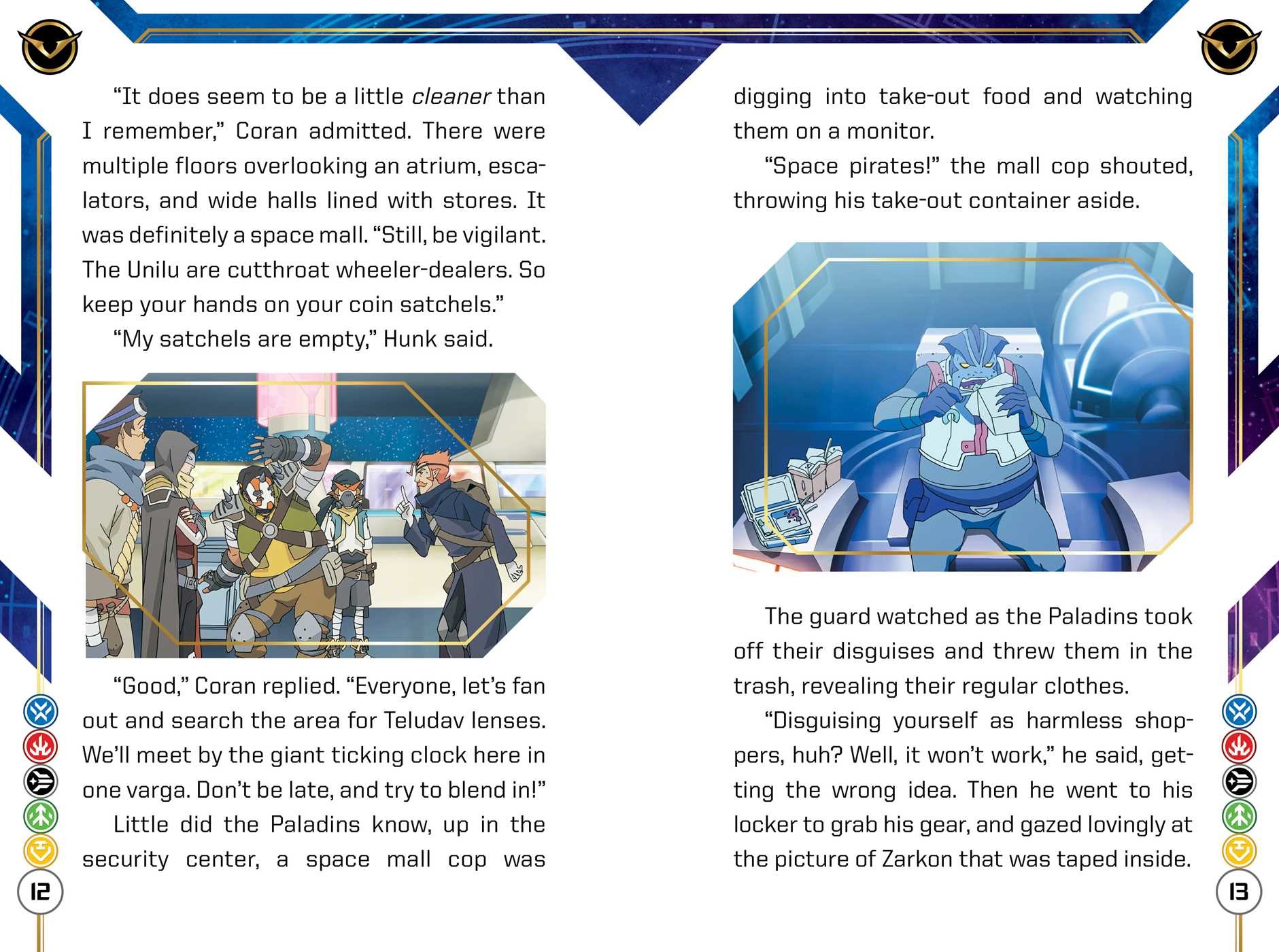 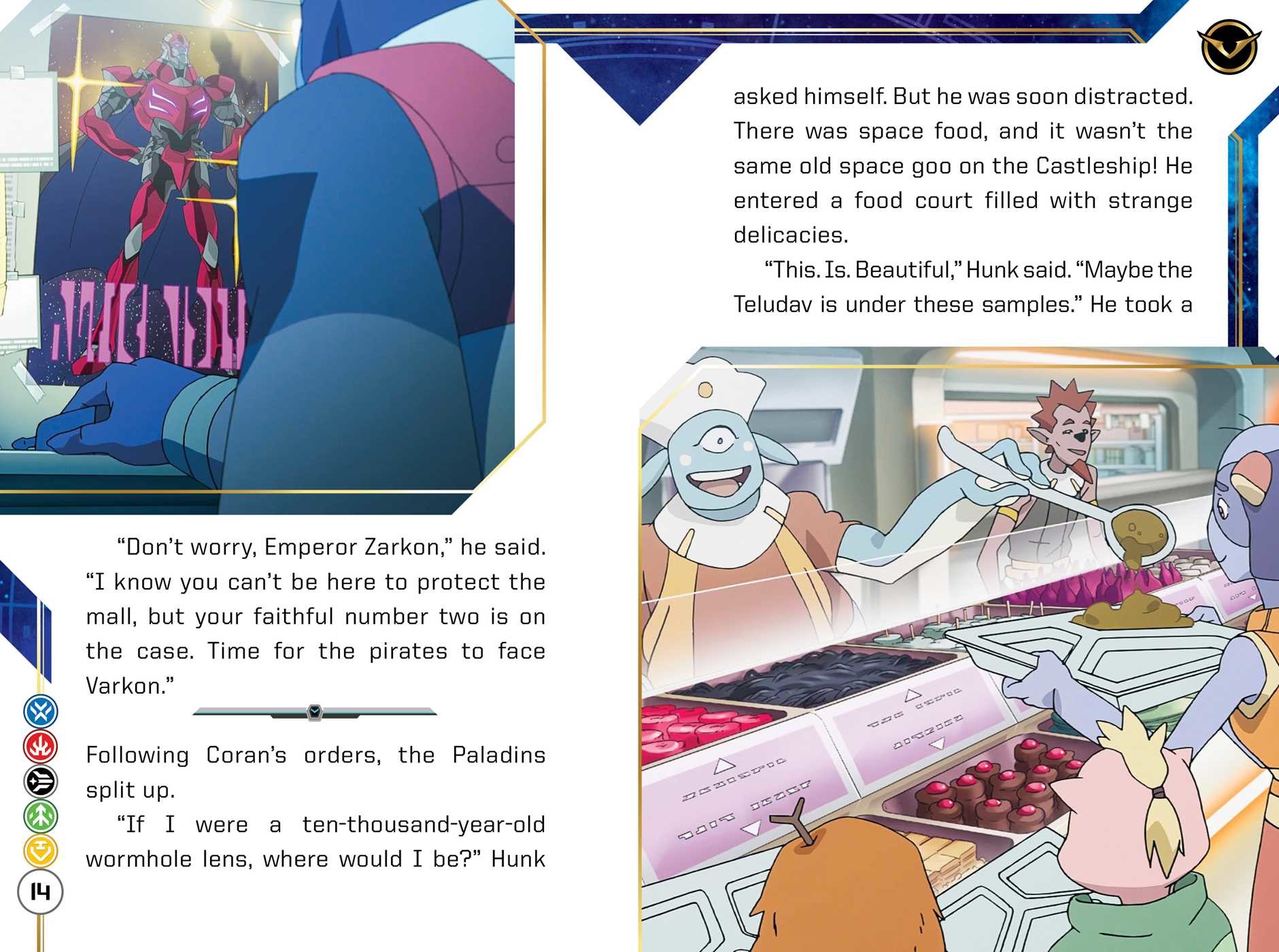 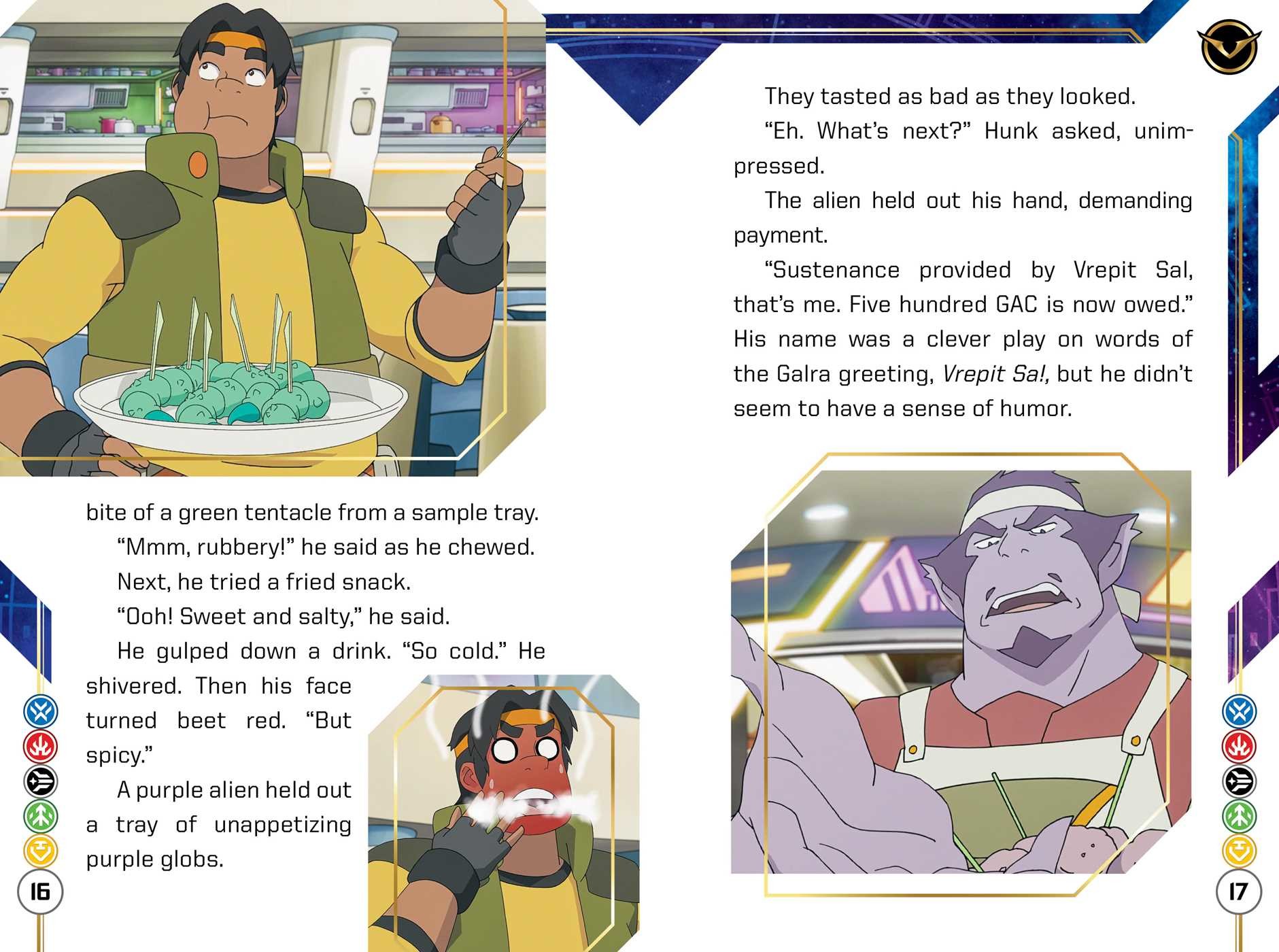 What’s the only thing scarier than Emperor Zarkon? Space Mall Cop Varkon, and he has it out for the Paladins of Voltron in this collectible chapter book retelling of the hottest new Netflix series, Voltron Legendary Defender from DreamWorks Animation!

Welcome to the Space Mall, the universe’s last resort against fair-priced goods. Here, you can purchase a whole set of Teludav lenses, all for the low, low price of your first-born child—or being the shopkeeper’s butler for one year. While Shiro works on forming a stronger bond with the Black Lion, the other Paladins navigate the galactic Space Mall, and try to avoid getting caught by Varkon (and his trusty hoverbike) in the process!

This hardcover edition includes a new, never-before-told story from the Space Mall!

Space Mall CHAPTER 1
Ten thousand years ago, Voltron was piloted by five original Paladins. One of those Paladins was King Alfor, Princess Allura’s father. Another pilot, the Paladins had just learned, was Emperor Zarkon.

Zarkon had flown the Black Lion, making him the original Black Paladin. It was through this connection that he was able to track Voltron—and attack the lions. If the Paladins were to have any chance against Zarkon, Shiro would have to form a new bond with his lion.

“One that’s stronger than his,” Shiro said.

Meanwhile, Coran and the other Paladins needed to get new Teludav lenses for the Castleship. Their lenses had recently broken. Without them, they couldn’t travel via wormholes and had even less of a chance of escaping Zarkon’s next move.

“I think I may know where we can get some,” Coran said. He showed everyone a picture of a swap shop run by the Unilu space pirates.

“Coran!” Allura protested. “You’re not suggesting going to one of those filthy swap moons? The last time you went, those space pirates took you for everything you had.”

Coran smiled, lost in thought. “Of course you had to bargain,” he told the Paladins. “No one could bargain like the Unilu. Now, let’s ready a pod for our mission.”

“Shotgun!” Lance shouted, and ran at full speed to get the pod’s front passenger seat.

“What? No, you have to be in the hangar to call shotgun!” Hunk said, running after him.

“You and I have some work to do,” he said. “What do I have to do to strengthen our bond?”

“Stop. Stop! Turn around. That’s an order!” Shiro shouted. He tried to jam the controls to force the lion to listen to him, but the lion just kept flying.

When it began to slow down, Shiro looked out and saw a burnt-out husk of what was once a planet.

“What are you trying to tell me?” Shiro asked the lion. Then the lion’s eyes began to glow. Shiro took this as the lion wanting him to see through its eyes. He closed his own, and let the lion take over.

With the lion’s eyes, Shiro saw visions of a vibrant planet with thriving cities. When Shiro opened his eyes again, the planet was in ruins once more.

“Was this your home?” Shiro asked, though deep down he knew the answer. He was visiting the remains of planet Daibazaal, the planet on which the Black Lion had lived with Zarkon.