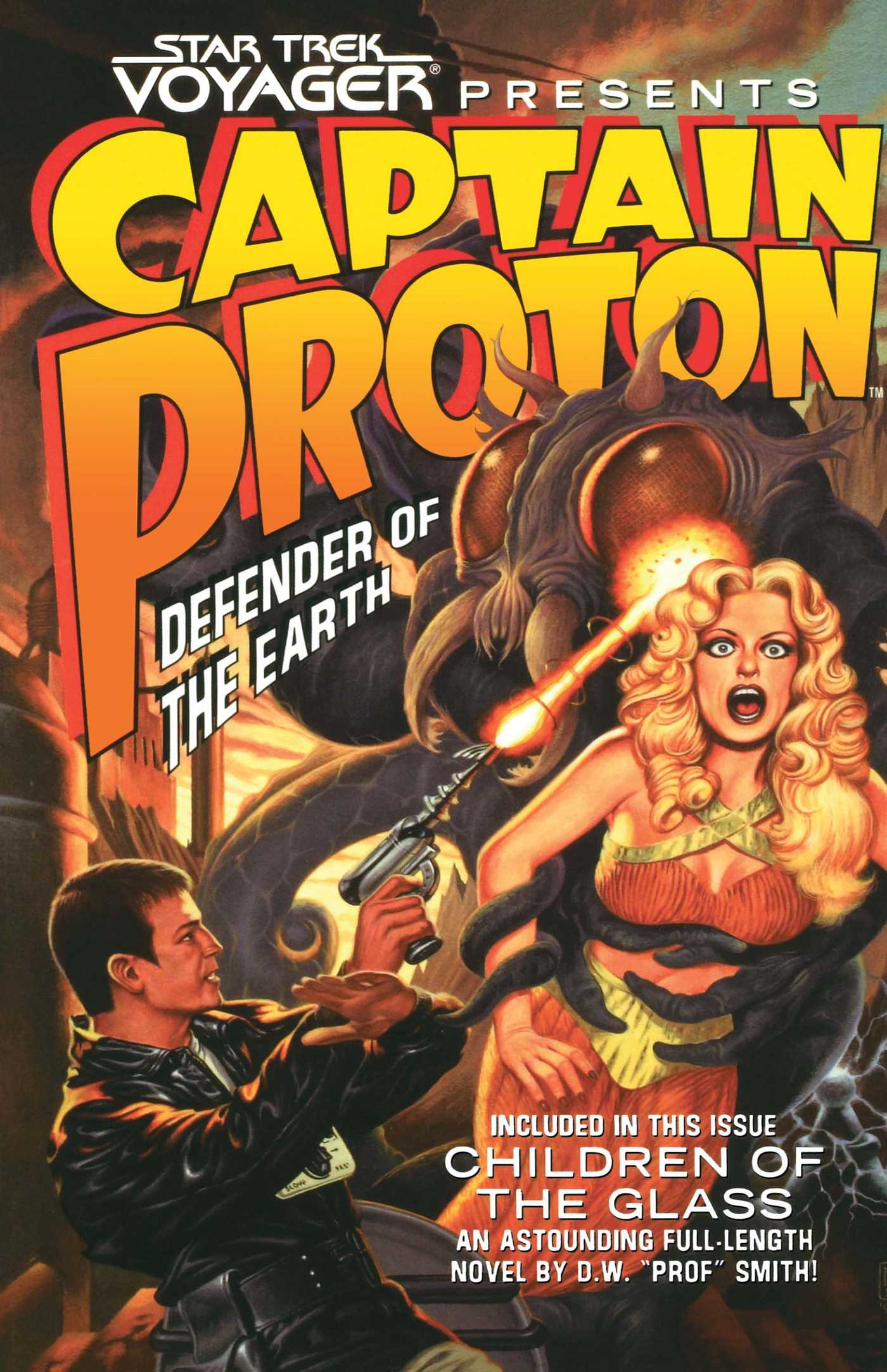 Return with us now to those thrilling days of yesteryear when Real Men with ray guns and beautiful women in beguiling outfits battled hideous monsters from outer space! Return with us to the days when Captain Proton ruled the skyways!
When the queen of an evil space empire kidnaps Captain Proton's faithful secretary Constance Goodheart, it's only the first step in her diabolical plan to conquer the Incorporated Planets. It soon becomes clear that there is more to her plot than meets the eye when, on the very edge of death, Captain Proton is saved by a power Not Of This Universe. Caught in an eons-old fight between two alien races, who can Captain Proton trust? No one -- not even his sidekick, ace reporter Buster Kincaid. Can Captain Proton save the Galaxy from the forces of evil and save Constance Goodheart from the Giant Demon Squid of Greyhawk II?
Extra! Dr. Chaotica plots the Death of the Patrol, Constance Goodheart must find Captain Proton before she shrinks to a size too small to be seen, and Buster Kincaid faces the Swamp of Doom!

Chapter One: A Door Opens

The Interspacial Cross-Galactic Door opened about two feet behind Constance Goodheart's chair as she leaned forward to daintily sip her soup, a chicken bisque flavored with the thick richness of the Jovian Emir plant. The Door opened with a faint sucking sound, as if Constance had made a rude noise with her soup, which she never would have done. In all the years Constance had been Captain Proton's secretary, he had never heard her make a rude noise. Lots of screams, but never, ever rude noises. That type of thing was just not in her nature.

With a second rude noise, the Interspacial Cross-Galactic Door shimmered, then stabilized just above the carpet, covering everything with a faint blue tinge.

Captain Proton had reserved the private dining room of the Moon's most famous restaurant, Tranquillity Fine Dining, just for the occasion of having a nice, quiet dinner with his secretary, Constance Goodheart. With so much going on around the galaxy, with so many problems, it had been a long time since they had had a dinner together when they could just sit and talk. Both Captain Proton and Constance had been looking forward to the evening and the wonderful food always served by Chef Henry of Tranquillity.

Now it was ruined!

"Move!" Captain Proton shouted at Constance as the rude noise made him look up and he saw the door. He instantly recognized it for an Interspacial Door from the shape and the blue tint of everything close by. Such doors were very expensive to operate, took massive amounts of power, and were illegal on every world in the Incorporated Planets.

But Captain Proton had learned that something being illegal never stopped the bad elements of the Galaxy.

Constance looked up at Captain Proton over her soup, a small drop of the bisque glistening on her lip like morning dew on a rose petal. There was an innocent expression on her face and a puzzled glint in her eyes.

He tried to reach across the table, to pull her out of danger, but before he could get a hold of her arm, a tall, powerful-looking woman stepped out of the door and leveled a weapon at him.

The first thing Captain Proton noticed right off was that the new woman in the room wore very little clothing. In fact, that detail was hard to miss. She had on what looked to be a brass -- or maybe copper -- bodice held firmly in place by leather straps over her shoulders and under her arms. The bodice looked sharp enough to be a deadly weapon in a close, hand-to-hand fight. Captain Proton had no intention of getting close enough to find out.

Her skirt was short and golden and revealed her stomach above the waist and powerful legs below the hemline. Her hair was the color of a setting sun, almost red in its richness.

And she was tall. Taller than Captain Proton by a few inches at least.

The weapon she held was almost transparent and very, very large. Frozen in position reaching for Constance, Captain Proton found himself looking right down the very, very large barrel. He was fairly certain he could see the firing chamber inside.

Using his years of training and lightning-fast reflexes, he dove sideways just as the woman fired, exploding his chair into sawdust and spilling his bisque all over the expensive moon carpet.

As he rolled he noted that the weapon fired a high-energy pulse beam. He'd never heard or seen anything like it before. But that didn't mean much. The Galaxy was a very large place and high-energy pulse weapons were possible.

Captain Proton rolled and came up with his ray gun, a small weapon he always kept tucked into his boot just for such emergencies, even when dressed up and dining out in a fine restaurant.

The tall woman fired at him again!

Captain Proton rolled to the left, just in time to get out of the way.

Another tall, muscular woman, dressed exactly like the first, appeared through the door and grabbed Constance by both arms, picking her up as if she weighed nothing more than a leaf. Captain Proton knew that Constance weighed a great deal more than a leaf, which made that second tall woman extremely strong.

Captain Proton rolled again and this time came up firing, making sure he didn't hit Constance. He winged the first tall woman in the arm. She spun around and smashed to the ground as two more very large, very tall women stepped through the Interspacial Door. They were all dressed the same and looked the same. And both new women had weapons drawn, aimed, and ready to fire.

Rolling out of the way wasn't going to save him this time. But he had an old saying he lived by: When facing terrible odds and no chance of survival, doing something is better than doing nothing.

Right now he was about to be blown into just a little more than a wet spot on the wall, a distasteful stain that would ruin a perfectly good dining room in a wonderful restaurant.

Again his instincts took over and he sprang toward the swinging door that led into the kitchen, smashing through it just as the wall behind him was destroyed by two high-energy pulse beams from the two new visitors.

Captain Proton tumbled into the kitchen and crashed into a serving table, sending dishes full of salad and shrimp flying in all directions. Two chefs started to come toward him, but he waved them back out of danger.

He shoved himself up onto one knee, picking crustaceans out of his hair, ray gun still aimed at the door, ready to take on anyone who followed him.

In the dining room, Constance screamed again. But in mid-scream the sound was cut off as if someone had stopped a recording in mid-note.

No one came through the door after him.

Then he realized what was happening. The women didn't care about him. He was expendable, something that had simply been in the way.

Captain Proton moved quickly back to the door and pushed it open just enough to peer into the smoke-filled private dining room.

The wounded woman was being helped through the Interspacial Door by one of the similarly attired women. Two others stood guard.

There was no sign of Constance. She must have already been taken through to the other side of that portal.

Captain Proton swung the kitchen door open and fired again, hitting one attacker solidly in the brass bodice, sending her tum-bling backward and through the Interspacial Cross-Galactic Door.

The remaining invader fired, exploding the door frame right above Captain Proton's head and sending him sprawling backward into the kitchen from the shock.

By the time he had scrambled to his feet and gotten back to the edge of the now destroyed kitchen entrance, all the invaders were back through the Interspacial Cross-Galactic Door and it was shimmering, about to vanish.

They had taken Constance!

With no regard now for his personal safety, only thinking of rescuing Constance, he rushed back into the dinning room and dove full-out through the air for the shimmering Interspacial Cross-Galactic Door. His thought was to get through the Door before it closed, then deal with the women on the other side.

If he lived long enough.

Considered one of the most prolific writers working in modern fiction, USA TODAY bestselling writer, Dean Wesley Smith published far over a hundred novels in forty years, and hundreds of short stories across many genres. He currently produces novels in four major series, including the time travel Thunder Mountain novels set in the old west, the galaxy-spanning Seeders Universe series, the urban fantasy Ghost of a Chance series, and the superhero series staring Poker Boy. During his career he also wrote a couple dozen Star Trek novels, the only two original Men in Black novels, Spider-Man and X-Men novels, plus novels set in gaming and television worlds.