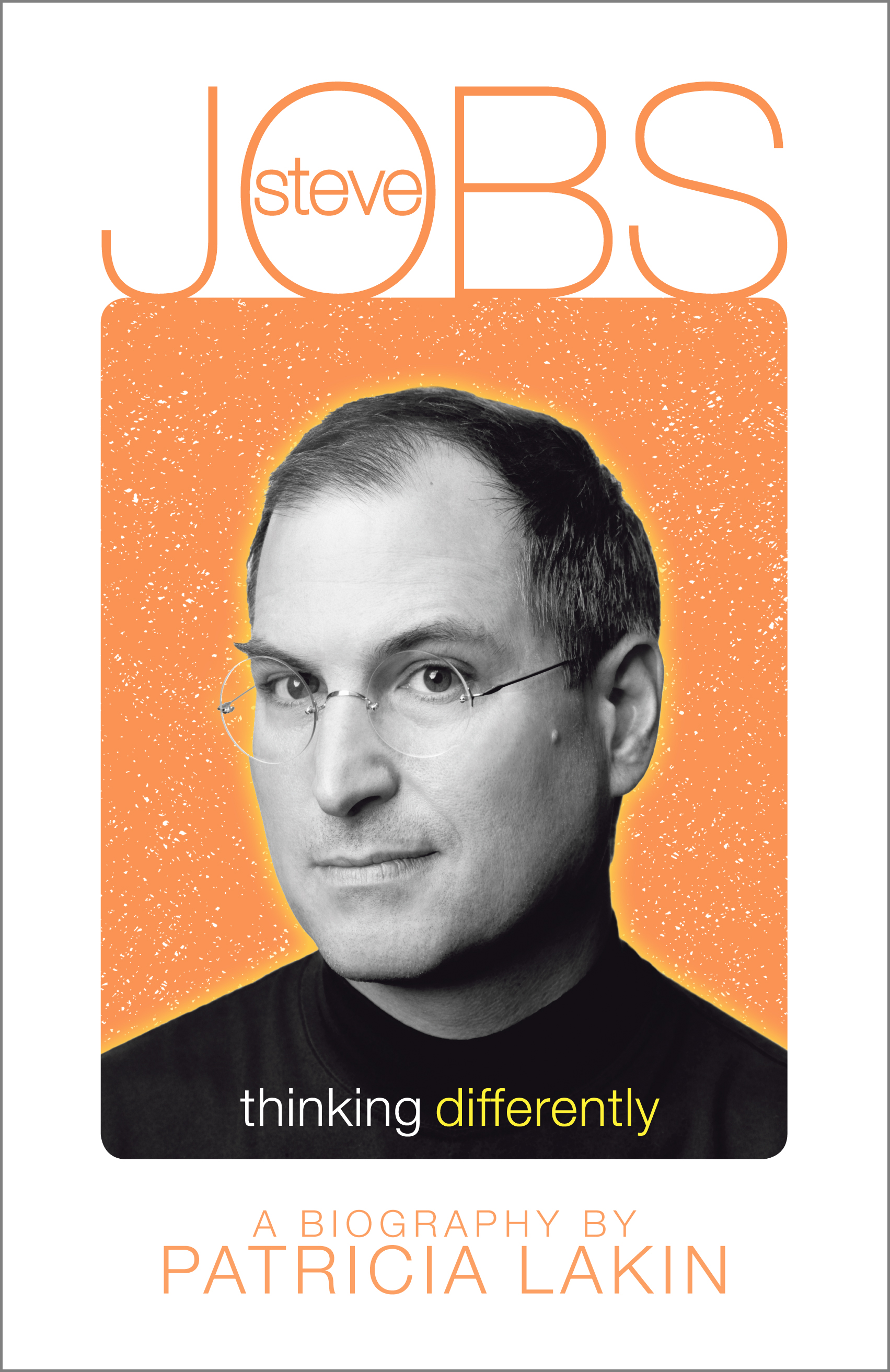 Written especially for a young audience, a must-read biography of Steve Jobs: visionary, entrepreneur, inventor, and cofounder of Apple.

Visionary. Pioneer. Little terror. Entrepreneur. Inventor. College dropout. Creative genius. These are just a few of the words used to describe the late Steve Jobs, cofounder, chairman, and chief executive officer of Apple Inc.
Available in both paperback and hardcover, Patricia Lakin’s biography for middle-grade readers tells the captivating and inspirational story of the ‘Thomas Edison’ of our time.

Steve Jobs CHAPTER 1 BEGINNINGS
GIVING UP A CHILD FOR adoption has to be an extraordinarily difficult and heart-wrenching decision. But in 1955, one particular couple felt they had no choice.

Abdulfattah “John” Jandali and Joanne Scheible were graduate students at the University of Wisconsin who wanted desperately to complete their education. They believed their studies would end, their subsequent careers would be nonexistent, if they chose to keep their child. And so, in San Francisco, California, on February 24, 1955, when their baby boy was born, they put him up for adoption.

Joanne Scheible, the baby’s birth mother, felt strongly that the adoptive parents had to be college graduates. Her first choice was a lawyer and his wife. But that couple wanted a girl.

The next family on the adoption agency’s list was Clara and Paul Jobs. They were delighted to adopt either a boy or a girl and open their home and their hearts to this infant.

The Jobses—unbeknownst to Joanna Scheible at first—were not college graduates. Clara Jobs had only finished high school. She worked as an accountant. Paul Jobs hadn’t even completed high school. He had served in the coast guard during World War II and worked as a machinist.

When Joanne Scheible discovered that the Jobses weren’t college graduates, she revised her conditions: In order for the adoption to go through, they had to promise they would send the child to college. The Jobses simply wanted to nurture and love their baby boy. How they would pay for his education was a question they would tackle in the future. But promise they did. Papers were signed and the adoption became official. A family was born. They named their son Steven Paul Jobs.

At the time of the adoption, Paul and Clara lived in a small apartment in San Francisco. Soon after Steven came into their lives, they moved to an inexpensive rental home in South San Francisco. In 1958 the Jobses added to their family once again when they adopted a baby girl, whom they named Patty.

Steve was inquisitive, energetic, and imaginative. As a toddler, he often woke up at four o’clock in the morning. To make sure they could get their rest, his parents bought him a rocking horse to play with. They also put a phonograph in his room with records by Little Richard, a rock-and-roll singer popular in the 1950s. Maybe Little Richard was their favorite artist and that’s why they chose his music. But it was an interesting choice: Little Richard’s songs, from “Good Golly, Miss Molly” to “Tutti Frutti,” were fast-paced and loud—not exactly music to relax to. During those few early morning hours, their son could safely “rock” in more ways than one.

Many women in the 1950s were stay-at-home mothers, and Steve was fortunate that Clara was able to spend a great deal of time with him, even teaching him to read before he started school. When not at work, Paul was a constant presence in Steve’s life too.

Paul had a workbench in his garage, and when Steve was about five or six years old, his father sectioned off a part of it for him. “Steve, this is your workbench now,” he said. He kept his tools and workbench clean and in perfect order, and while many parents might have been reluctant to let a young child “invade their space,” Paul welcomed Steve to share his tools, his space, and his own joy in creating.

Paul liked to buy old cars, fix them up, and sell them. Refurbishing those cars gave him some experience working with a car’s electronics parts and exposed Steve to the auto’s inner workings. Paul passed along not only his fascination with electronics but also his pride in workmanship. He often told his son that when building something, every part should be well made and put together with precision and care, whether the part showed or not.

Steve said of his father, “He can fix anything and make it work and take any mechanical thing apart and get it back together. That was my first glimpse of it. I started to gravitate more toward electronics, and he used to get me things I could take apart and put back together.”

Even though Steve knew how to read and build things when he started at Monta Loma Elementary School in Mountain View, it was still a difficult time for him. “School was pretty hard for me at the beginning. . . . When I got there I really just wanted to do two things: I wanted to read books, because I loved reading books, and I wanted to go outside and chase butterflies. You know, do the things that five-year-olds like to do.”

It’s possible he didn’t have teachers who knew how to reach—or teach—him. And it’s possible that the controlled, structured environment—having to sit still at a desk from early morning until midafternoon—was uninviting and a challenge for Steve. He said of that time, “I encountered authority of a different kind than I had ever encountered before, and I did not like it. And they really almost got me. They came close to really beating any curiosity out of me.”

Also, Steve was a bit of a loner, used to getting his own way. When something didn’t go as he wished at home, he’d storm off and cry. Those qualities may have made it more difficult for him to fit in with his classmates at school. His way of dealing with the day-to-day life at school that he thought was boring and a waste of his time was to make mischief. Lots of it.

In third grade Steve’s partner in crime was his buddy Rick Ferrentino. They let snakes loose in the classroom and set explosives off in the teacher’s desk. With Rick, more complex pranks were possible.

Outside the school, all the kids’ bikes were lined up and locked in the bike racks. Steve and Rick found out who owned each bike and traded their own bike lock combinations for that person’s combination. When they amassed all the combinations for each of the bike locks, they went into action.

They opened every bike lock and reattached it to someone else’s bike. When school was dismissed and the kids went to open their locks, they couldn’t figure out why their locks weren’t opening. Steve recalled the outcome years later: “It took them until about ten o’clock that night to get all the bikes sorted out.”

In fourth grade the principal was determined to separate the two boys. By chance, Mrs. Imogene “Teddy” Hill, who taught an advanced fourth-grade class, volunteered to take one of the boys. She was assigned to be Steve’s teacher. He would later remember her as “one of the other saints of my life.”

Imogene Hill followed her own instincts growing up. At the age of three, she acted onstage and went by the name “Little Imogene.” She was part of a sister-and-brother dancing act and was described as being a bundle of energy. She kept up her love of acting even in college.

She was now a married woman and a dedicated teacher. Perhaps her love of theater and performing made her an unorthodox teacher. Or perhaps she was simply a passionate teacher who wanted to inspire every student in her classroom. Whatever it was, she must have been sizing up this particular fourth-grade boy to figure out how to reach him.

After the first few weeks of school, she approached Steve with a challenge: If he took a math workbook home, completed it all on his own, and got 80 percent of it correct, she’d give him a huge lollipop and five dollars. Steve responded. He accepted the challenge, succeeded, and got the candy and the five dollars. He said, “She got hip to my whole situation in about a month and kindled a passion in me for learning things.”

As Jobs recalled, “She got me kits for making cameras. I ground my own lens and made a camera. . . . I think I probably learned more academically that one year than I’ve ever learned in my life.”

Fourth grade with Mrs. Hill has to be considered a turning point in Steve’s life. In a 1995 interview he said, “I’m a hundred percent sure that if it hadn’t been for Mrs. Hill in fourth grade and a few others, I absolutely would have ended up in jail. I could see those tendencies in myself to have a certain energy to do something. It could have been directed at doing something interesting that other people thought was a good idea or doing something interesting that other people maybe didn’t like so much.” He went on to say, “When you’re young, a little bit of course correction goes a long way.”

At the end of the school year, Steve had done so well academically that the administrators had him tested. He scored so high that the school system wanted to advance this former troublemaker directly to high school.

Luckily for Steve, his parents thought sending an eleven-year-old to high school was a terrible idea. They agreed to have him skip one grade (fifth) but no more than that. So, in the fall of 1966, Steve entered sixth grade at Crittenden Middle School in Mountain View. 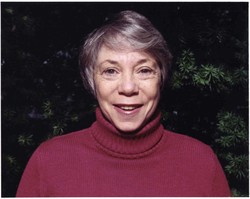 Patricia Lakin, a former elementary school teacher and an award-winning author, has written more than fifty published works. Her books, both fiction and nonfiction, span multiple age groups—from toddlers to middle graders. Patricia lives in New York City with her husband, Lee Koenigsberg. They have two grown sons, Aaron and Benjahmin. When not reading, writing, or researching, she can be found traveling with Lee to far-off places in the world.

"Even reluctant middle-grade readers will devour Patricia Lakin's (the Max & Mo series) biography of Steve Jobs--a fascinating portrait of a kid who breaks nearly every rule and yet rises to astronomical heights."

More books in this series: A Real-Life Story