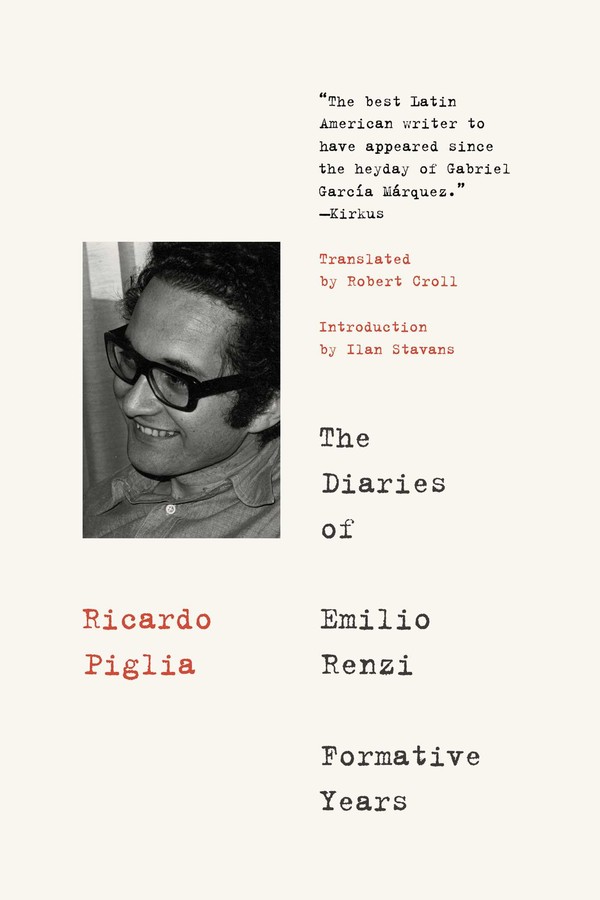 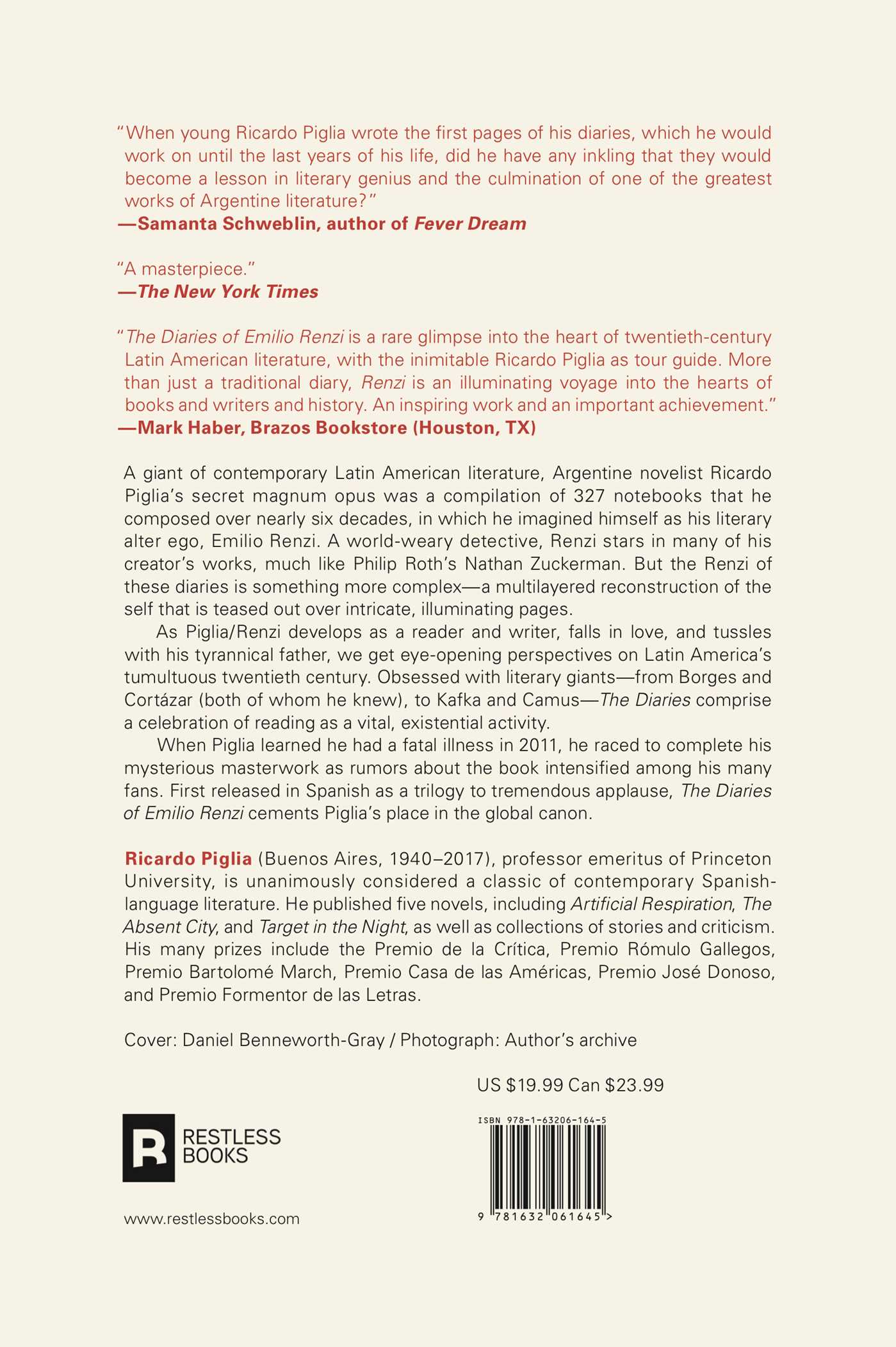 “Cognizant of his impending death, Piglia, the Argentine titan of letters who died of A.L.S. in January, prepared his 327 notebooks for publication in a trilogy…. Splendidly crafted and interspliced with essays and stories, this beguiling work is to a diary as Piglia is to “Emilio Renzi”: a lifelong alter ego, a highly self-conscious shadow volume that brings to bear all of Piglia’s prowess as it illuminates his process of critical reading and the inevitable tensions between art and life.” —Mara Faye Lethem, The New York Times Book Review

A giant of contemporary Latin American literature, Argentine novelist Ricardo Piglia’s secret magnum opus was a compilation of 327 notebooks that he composed over nearly six decades, in which he imagined himself as his literary alter ego, Emilio Renzi. A world-weary detective, Renzi stars in many of his creator's works, much like Philip Roth's Nathan Zuckerman. But the Renzi of these diaries is something more complex—a multilayered reconstruction of the self that is teased out over intricate, illuminating pages.

As Piglia/Renzi develops as a reader and writer, falls in love, and tussles with his tyrannical father, we get eye-opening perspectives on Latin America’s tumultuous twentieth century. Obsessed with literary giants—from Borges and Cortázar (both of whom he knew), to Kafka and Camus—The Diaries comprise a celebration of reading as a vital, existential activity.

When Piglia learned he had a fatal illness in 2011, he raced to complete his mysterious masterwork as rumors about the book intensified among his many fans. First released in Spanish as a trilogy to tremendous applause, The Diaries of Emilio Renzi cements Piglia’s place in the global canon.

“Splendidly crafted and interspliced with essays and stories, this beguiling work is to a diary as Piglia is to “Emilio Renzi”: a lifelong alter ego, a highly self-conscious shadow volume that brings to bear all of Piglia’s prowess as it illuminates his process of critical reading and the inevitable tensions between art and life. Amid meeting redheads at bars, he dissects styles and structures with a surgeon’s precision, turning his gaze on a range of writers, from Plato to Dashiell Hammett, returning time and again to Pavese, Faulkner, Dostoyevsky, Arlt and Borges. Chock-full of lists of books and films he consumed in those voracious early years of call girls, carbon paper, amphetamines and Heidegger, this is an embarrassment of riches — by turns an inspiring master class in narrative analysis, an accounting of the pesos left in his pockets and a novel of Piglia’s grandfather (named Emilio, natch) with his archive of World War I materials pilfered from Italian corpses…. No previous familiarity with Piglia’s work is needed to appreciate these bibliophilic diaries, adroitly repurposed through a dexterous game of representation and masks that speaks volumes of the role of the artist in society, the artist in his time, the artist in his tradition.”

“For the past few years, every Latin American novelist I know has been telling me how lavish, how grand, how transformative was the Argentinian novelist Ricardo Piglia’s final project, a fictional journal in three volumes, Los diarios de Emilio Renzi—Renzi being Piglia’s fictional alter ego. And now here at last is the first volume in English, The Diaries of Emilio Renzi: Formative Years, translated by Robert Croll. It’s something to be celebrated… [It] offer[s] one form of resistance to encroaching fascism: style.”

“[A] masterpiece…. everything written by Ricardo Piglia, which we read as intellectual fabrications and narrated theories, was partially or entirely lived by Emilio Renzi. The visible, cerebral chronicles hid a secret history that was flesh and bones.”

“A valediction from the noted Argentine writer, known for bringing the conventions of hard-boiled U.S. crime drama into Latin American literature...Fans of Cortázar, Donoso, and Gabriel García Márquez will find these to be eminently worthy last words from Piglia.”

“When young Ricardo Piglia wrote the first pages of his diaries, which he would work on until the last years of his life, did he have any inkling that they would become a lesson in literary genius and the culmination of one of the greatest works of Argentine literature?”

“Ricardo Piglia, who passed away earlier this year at age seventy-five, is celebrated as one of the giants of Argentine literature, a rightful heir to legends like Borges, Cortázar, Juan Jose Saer, and Roberto Arlt. The Diaries of Emilio Renzi is his life's work...An American equivalent might be if Philip Roth now began publishing a massive, multi-volume autobiography in the guise of Nathan Zuckerman…It is truly a great work...This is a fantastic, very rewarding read—it seems that Piglia has found a form that can admit everything he has to say about his life, and it is a true pleasure to take it in.”

"Here through the Boom and Bolaño breech storms Ricardo Piglia, not just a great Latin American writer but a great writer of the American continent. Composed across his entire career, The Diaries of Emilio Renzi is Piglia's secret story of his shadow self—a book of disquiet and love and literary obsession that blurs the distinctness of each and the other."

“In 1957, Argentinian writer Ricardo Piglia started to write what would become 327 notebooks filled with the thoughts of his alter ego, Emilio Renzi. Piglia’s final literary act before his death in January 2017 was to organize and publish these works as Renzi’s diaries. Formative Years, the first of three volumes, covers the years 1957 to 1967, detailing Renzi’s development into a central figure of Argentine literary culture. In epigrammatic diary entries filled with memorable observations, Piglia details Renzi’s political education, relationships, views on Argentinian politics, and experiences during this remarkably productive era of Latin American fiction. As a fictionalized autobiography, it is, like the work of Karl Ove Knausgaard, of My Struggle fame, part confession and part performance. Renzi meets and corresponds with literary luminaries like Borges, Cortázar, and Márquez, and offers insightful readings of Dostoevsky, Kafka, Faulkner, and Joyce. Ilan Stavans (Quixote: The Novel and the World, 2015) provides a wonderfully informative introduction. Fans of W.G. Sebald and Roberto Bolaño will find the first installment in Piglia’s trilogy to be a fascinating portrait of a writer’s life.”

“In this fictionalized autobiography, Piglia’s ability to succinctly criticize and contextualize major writers from Kafka to Flannery O’Connor is astounding, and the scattering of those insights throughout this diary are a joy to read. This book is essential reading for writers.”

“The Diaries of Emilio Renzi is a rare glimpse into the heart of twentieth-century Latin American literature, with the inimitable Ricardo Piglia as tour guide. More than just a traditional diary, Renzi is an illuminating voyage into the hearts of books and writers and history. An inspiring work and an important achievement.”

“The great Argentine writer…. In a career that spanned four decades, during which he became one of Latin America’s most distinctive literary voices."