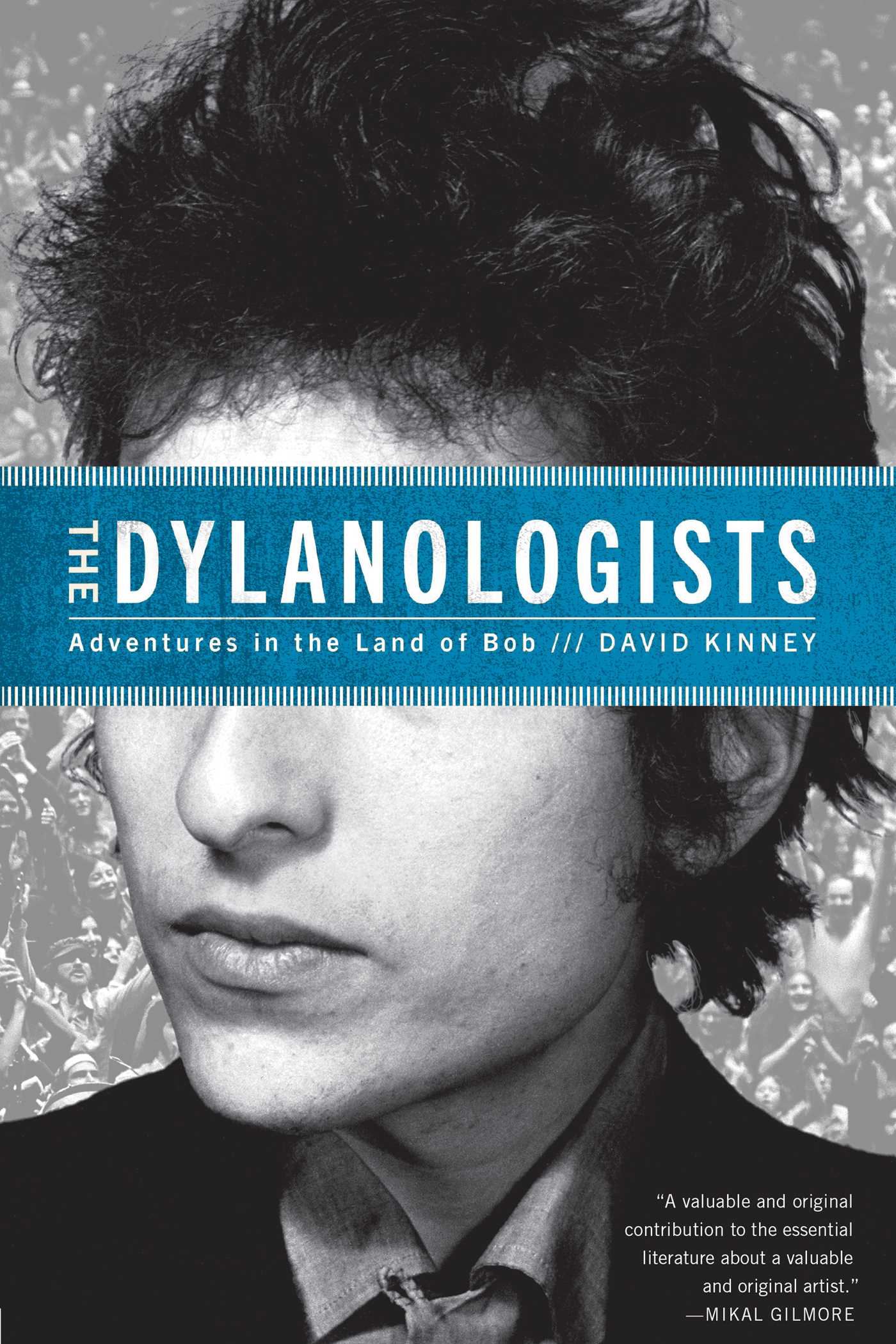 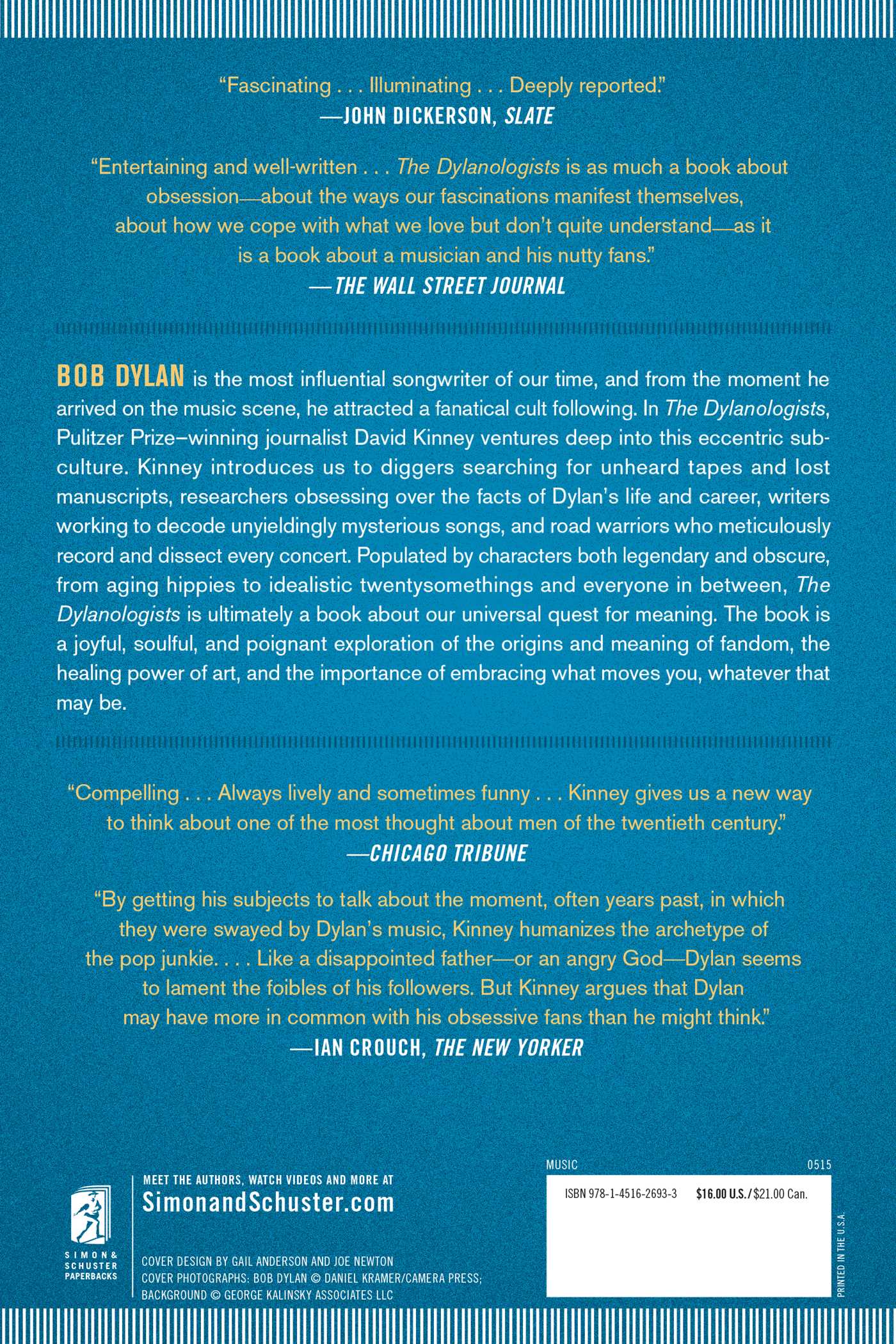 Adventures in the Land of Bob

By David Kinney
PRICE MAY VARY BY RETAILER

A joyous and poignant exploration of the meaning of fandom, the healing power of art, and the importance of embracing what moves you, “The Dylanologists is juicy…artfully told…and an often moving chronicle of the ecstasies and depravities of obsession” (New York Daily News).

Bob Dylan is the most influential songwriter of our time, and, after a half century, he continues to be a touchstone, a fascination, and an enigma. From the very beginning, he attracted an intensely fanatical cult following, and in The Dylanologists, Pulitzer Prize–winning journalist David Kinney ventures deep into this eccentric subculture to answer a question: What can Dylan’s grip on his most enthusiastic listeners tell us about his towering place in American culture?

Kinney introduces us to a vibrant underground: diggers searching for unheard tapes and lost manuscripts, researchers obsessing over the facts of Dylan’s life and career, writers working to decode the unyieldingly mysterious songs, fans who meticulously record and dissect every concert. It’s an affectionate mania, but as far as Dylan is concerned, a mania nonetheless. Over the years, the intensely private and fiercely combative musician has been frightened, annoyed, and perplexed by fans who try to peel back his layers. He has made one thing—perhaps the only thing—crystal clear: He does not wish to be known.

Told with tremendous insight, intelligence, and warmth, “entertaining and well-written…The Dylanologists is as much a book about obsession—about the ways our fascinations manifest themselves, about how we cope with what we love but don’t quite understand—as it is a book about a musician and his nutty fans” (The Wall Street Journal). 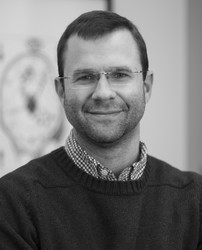 David Kinney is the author of The Dylanologists and The Big One. A Pulitzer Prize–winning journalist, his writing has appeared in newspapers around the world, including The New York Times, The Washington Post, and The Boston Globe.

“Fascinating . . . Kinney’s tale of the peculiarly symbiotic triangle between Dylan obsessives, his music, and the inscrutable man himself poses some interesting conundrums. In one sense, the people who follow Their Bob around on tour, scrounge his unreleased studio recordings or buy the manger he was born in are like refugees from a Coen brothers reality show: ‘Inside the Hoarders of Highway 61.’ But there is also a tantalizing sense that Dylan, as hostile or plain indifferent to them as he might appear, has his reciprocal moments too.”

“Entertaining and well-written . . . The Dylanologists is as much a book about obsession—about the ways our fascinations manifest themselves, about how we cope with what we love but don’t quite understand—as it is a book about a musician and his nutty fans.”

“The book, a compelling study of Dylan’s most fervent and studious fans, is always lively and sometimes funny, but Kinney never finds humor at the expense of the obsessives he profiles. By presenting sympathetic, respectful portraits of people who were inspired by Dylan to write, read, travel, archive, and rethink their lives, Kinney gives us a new way to think about one of the most thought about men of the twentieth century. . . . What’s more exciting is the way The Dylanologists shifts the perspective of a well-known history: Kinney recounts an important artist’s excursions into electric guitar, Christianity and even Christmas carols not for the purpose of examining what these periods mean to Dylan’s life or artistry, but what they mean for the lives and artistry of the people who experienced them. By celebrating these merits—be they the ingenuity to cull incredible collections or the wherewithal to reinvent oneself—Kinney’s subjects prove themselves more creative than kooky.”

“By getting his subjects to talk about the moment, often years past, in which they were swayed by Dylan’s music, Kinney humanizes the archetype of the pop junkie. . . . Most of the fans that Kinney talks to aren’t fools or stalkers. They have simply developed an usually strong affinity for an artist and his music. . . . Kinney’s own fandom seems to have lapsed a bit into skepticism, yet he never mocks the continued devotion of those who still believe.”

“[A] must-read book . . . While there are countless books about Bob Dylan’s life and music, Kinney approaches Dylan from a different angle—the followers, scholars and kooks.”

“In Kinney’s hands, what might have been a fans-only romp becomes instead a surprisingly touching mosaic of stories about the meanings that people (even Dylan himself) seek so energetically from art and artists.”

“Entertaining . . . While there’s no shortage of Dylan biographies or analyses of his work, The Dylanologists offers an interesting examination of Dylan’s cultlike band of followers who seem to put their lives on hold while dedicating themselves to the performer and his music. Fans will certainly enjoy this book, but so, too, should readers who seek a fascinating examination of a strange subculture.”

“Juicy . . . Artfully told . . . The Dylanologists is an often moving chronicle of the ecstasies and depravities of obsession.”

“What’s worse, waking up an alcoholic or waking up as the editor of a Bob Dylan fanzine? . . . David Kinney’s The Dylanologists is the best book about music that has nothing to do with music. By holding a mirror up to the obsessives, the completists, the weirdos and the garbologists (those who literally go through Dylan’s bins looking for clues), Kinney provides the final word on the tragi-comedy of intense, unrelenting fandom . . . [and] reveals that Dylan himself is actually a red herring; what Dylanologists are actually after is a meaning in their own lives.”

“Outrageous . . . Truly fascinating . . . Perhaps the only thing more inscrutable than Bob Dylan is the cavalcade of misfits and muckrakers that parade through this earnest exploration of the artist’s even more curious brand of devotees. . . . Alternately funny, intriguing, and shocking.”

“The Dylanologists is about people who care deeply about Bob Dylan—some obsessively, following him, studying him, as a central and powerful touchstone of meaning and guidance in their lives. Their fixations might seem quaint, even absurd, but David Kinney allows these people their genuine and hard-earned profundity. As we learn about their lives and thoughts, we also learn about Dylan’s, with insights that are compassionate, good-humored, troubling and revelatory, and that feel humane and accurate. This is a valuable and original contribution to the essential literature about a valuable and original artist. It’s also an absolutely pleasurable read.”

– Mikal Gilmore, author of, Shot in the Heart

“The Dylanologists is a wonderful book—well written, insightful, and smartly reported. In chronicling Bob Dylan’s fans, David Kinney provides a clear-eyed portrait of the artist and the country that created him.”

“We have come to the metafictional stage of Dylan historiography—books not so much about the man as about his fans, his sources, his very relics. Kinney’s is fascinating, from his portrait of a pharmacist who has schemed to purchase not only Dylan’s childhood home but his high chair, to fans who somehow appear in the first row at every show. These are spooky sketches of a fringe culture in the twenty-first century, a world that could only exist because of Bob Dylan.”

– Daniel Mark Epstein, author of, The Ballad of Bob Dylan

Adventures in the Land of Bob

By David Kinney
PRICE MAY VARY BY RETAILER