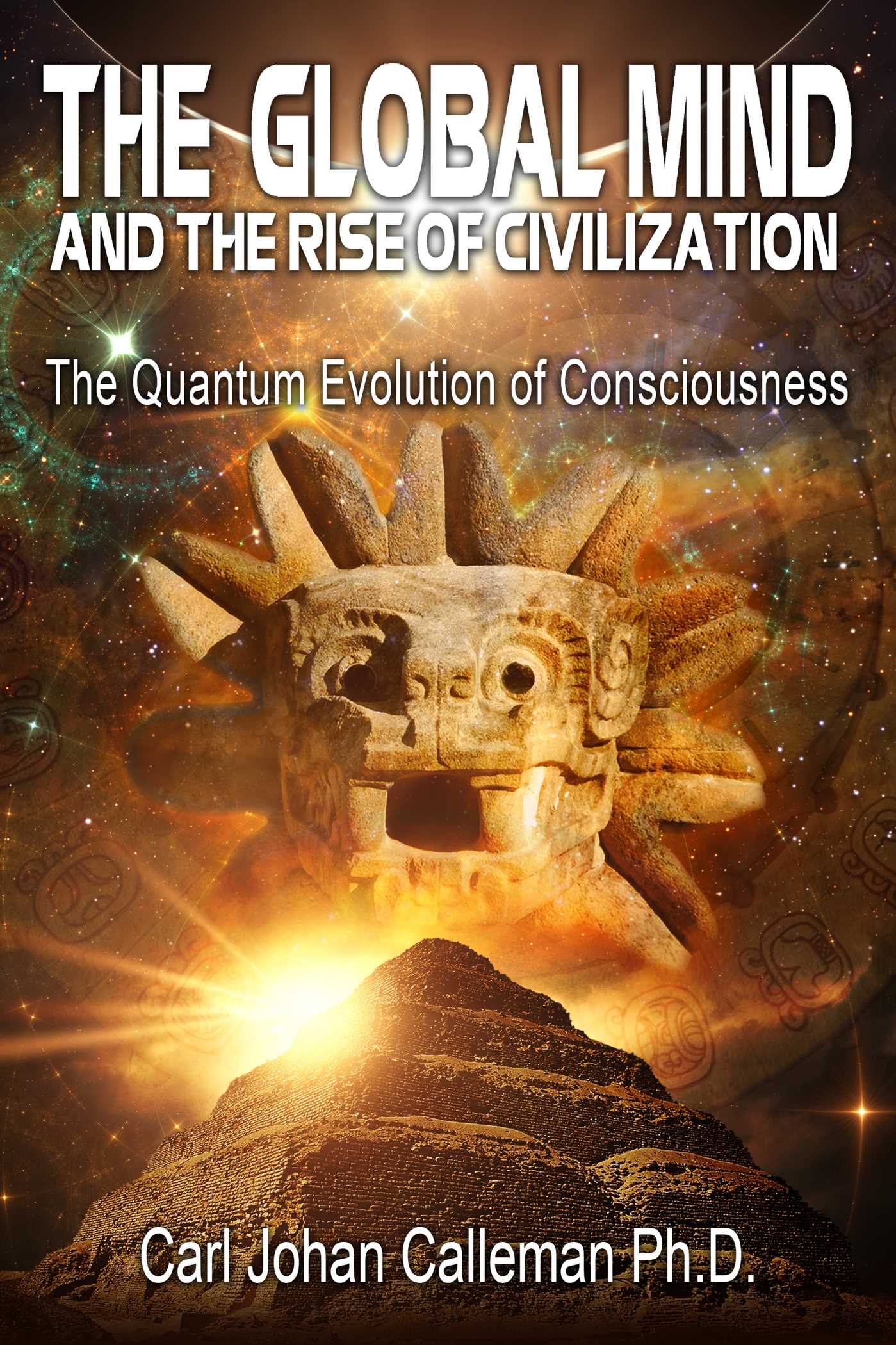 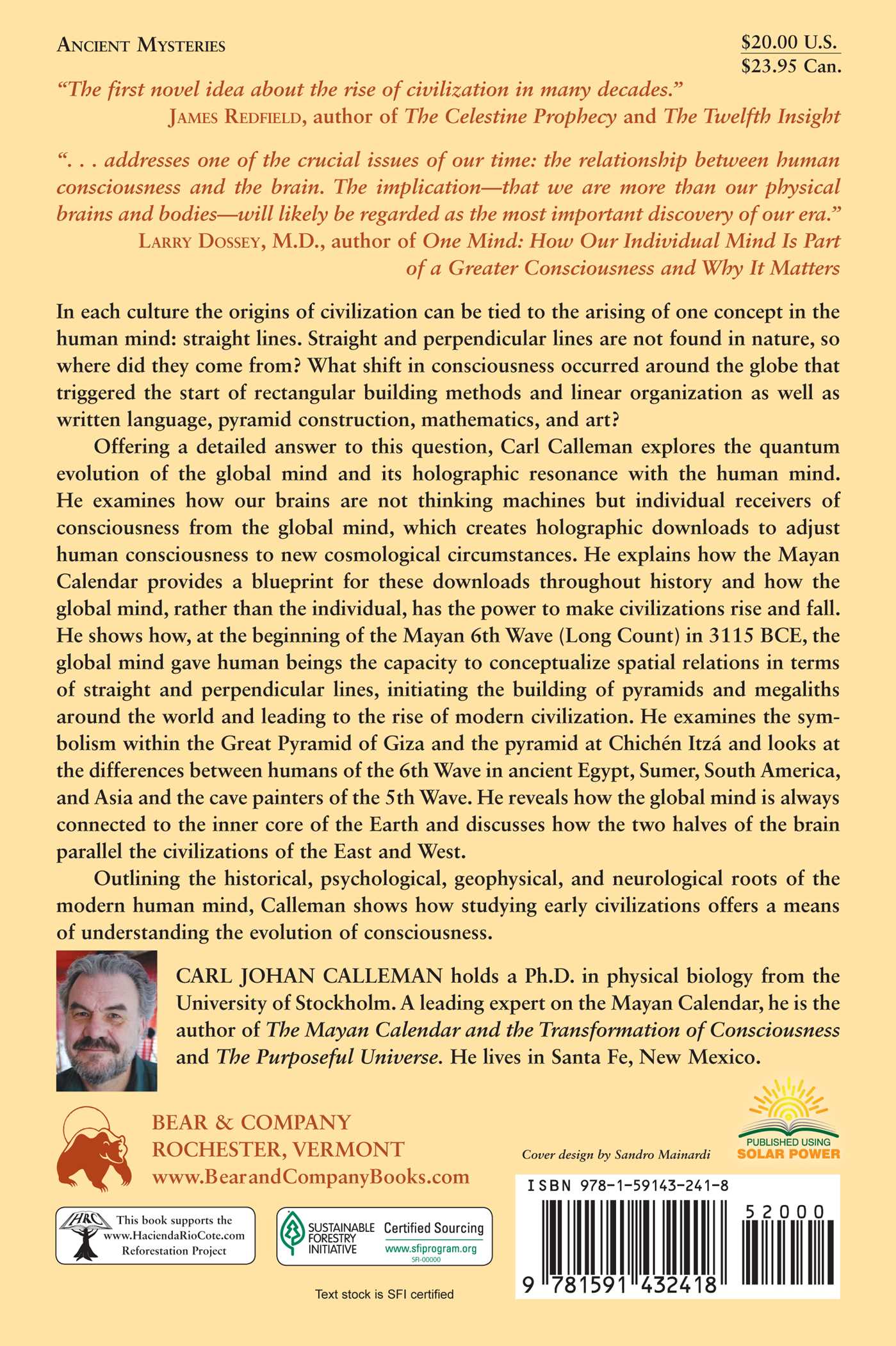 The Global Mind and the Rise of Civilization

The Quantum Evolution of Consciousness

In each culture the origins of civilization can be tied to the arising of one concept in the human mind: straight lines. Straight and perpendicular lines are not found in nature, so where did they come from? What shift in consciousness occurred around the globe that triggered the start of rectangular building methods and linear organization as well as written language, pyramid construction, mathematics, and art?
Outlining the historical, psychological, geophysical, and neurological roots of the modern human mind, Calleman shows how studying early civilizations offers a means of understanding the evolution of consciousness.

The Dawn of the Human Mind

Civilization is known to have appeared quite suddenly around 3100 BCE. In the words of the English Egyptologist Toby Wilkinson, who studied rock carvings in pre-dynastic Egypt, “there is still a major gap in the record, still a ‘missing link.’ So many of the aspects that distinguish Pharaonic culture seem to have come into being quite suddenly, without any discernible predecessors.” Therefore, anyone who contemplates for instance Egyptian civilization will have to face up to the fact that its most spectacular creations emerged soon after the institution of its first dynasty, rather than at its height or end. To get a sense of how early the pyramids were in Egyptian history we may consider that Cleopatra (69-30 BCE), the last pharaoh of Egypt, was closer to our own time than she was to the erection of the Great Pyramid.

With this knowledge as a background--that the construction of the Egyptian pyramids marks the approximate starting point of civilization--we may now return to the question: “Why were these pyramids built?” Our most important hint is then that they were built at the time of beginning of the Long Count calendar. Another related hint is that they had been preceded by the world’s oldest rectangular structures that derive from the time of activation of the pre-Long Count. This implies that these two calendars may mark shifts in the evolution of geometric structures. Maybe then, if we understand why the Maya set the beginnings of these two creations to the years 8240 and 3115 BCE, respectively, we may also understand why rectangular buildings and pyramids start to appear around these particular times. We will then of course have to take their calendar system seriously and explore if there is a reality to what they called “creations” and their relationship to the geometry of what humans created. If these calendars then turn out to reflect new creations and waves of evolution, bringing new frames of mind into existence, the enigma of the pyramids would be resolved if we only knew how the minds were altered--and by what.

For this we are in a fortunate position, since the Maya did indeed provide an explanation as to why their Long Count calendar began at the time it did. According to the late Linda Schele at the University of Texas, who has played a significant role in deciphering Mayan glyphs, it is inscribed at the Tablet of the Cross at the site of Palenque that at the beginning of this calendar, “the First Father erected the World Tree,” so that “the light could enter.” To understand this at first enigmatic description, we need to be aware that according to the Maya, the World Tree (what most other cultures refer to as the Tree of Life) was the origin of the four directions. The inscription in Palenque then continues: “it was made proper, the Raised-up Sky-Place, the Eight-House-Partition, is its holy name, the House in the North.”

Carl Johan Calleman holds a Ph.D. in Physical Biology and has served as an expert on chemical carcinogens for the World Health Organization. He began his studies on the Mayan calendar in 1979 and now lectures throughout the world. He is also author of The Purposeful Universe, Solving the Greatest Mystery of Our Time: The Mayan Calendar and The Mayan Calendar and the Transformation of Consciousness. He lives in Santa Fe, New Mexico.

“The first novel idea about the rise of civilization in many decades.”

– James Redfield, author of The Celestine Prophecy and The Twelfth Insight

“The Global Mind and the Rise of Civilization addresses one of the crucial issues of our time, on which our future may depend: the relationship between human consciousness and the brain. The evidence shows that mind and brain are not identical, as we have been led to believe. Minds are capable of things that brains cannot do. The implication--that we are more than our physical brains and bodies--will likely be regarded as the most important discovery of our era. Let Calleman be your guide on this exciting journey.”

– Larry Dossey, M.D., author of One Mind: How Our Individual Mind Is Part of a Greater Consciousness a

“In The Global Mind and the Rise of Civilization, Carl Johan Calleman formulates a unique outlook on human civilization, one that is deeply rooted in metaphysical changes in human consciousness. The effect is to reconcile diverse aspects of symbolism, myth, and theology, drawn from a wide range of ancient cultures.”

– Laird Scranton, author of The Science of the Dogon and Point of Origin: Gobekli Tepe and the Spiritu

“Calleman examines how the two hemispheres of the brain have parallels with the East and West civilizations and suggests that the global mind is connected to the Earth’s inner core. …fascinating book.”

The Global Mind and the Rise of Civilization

The Quantum Evolution of Consciousness