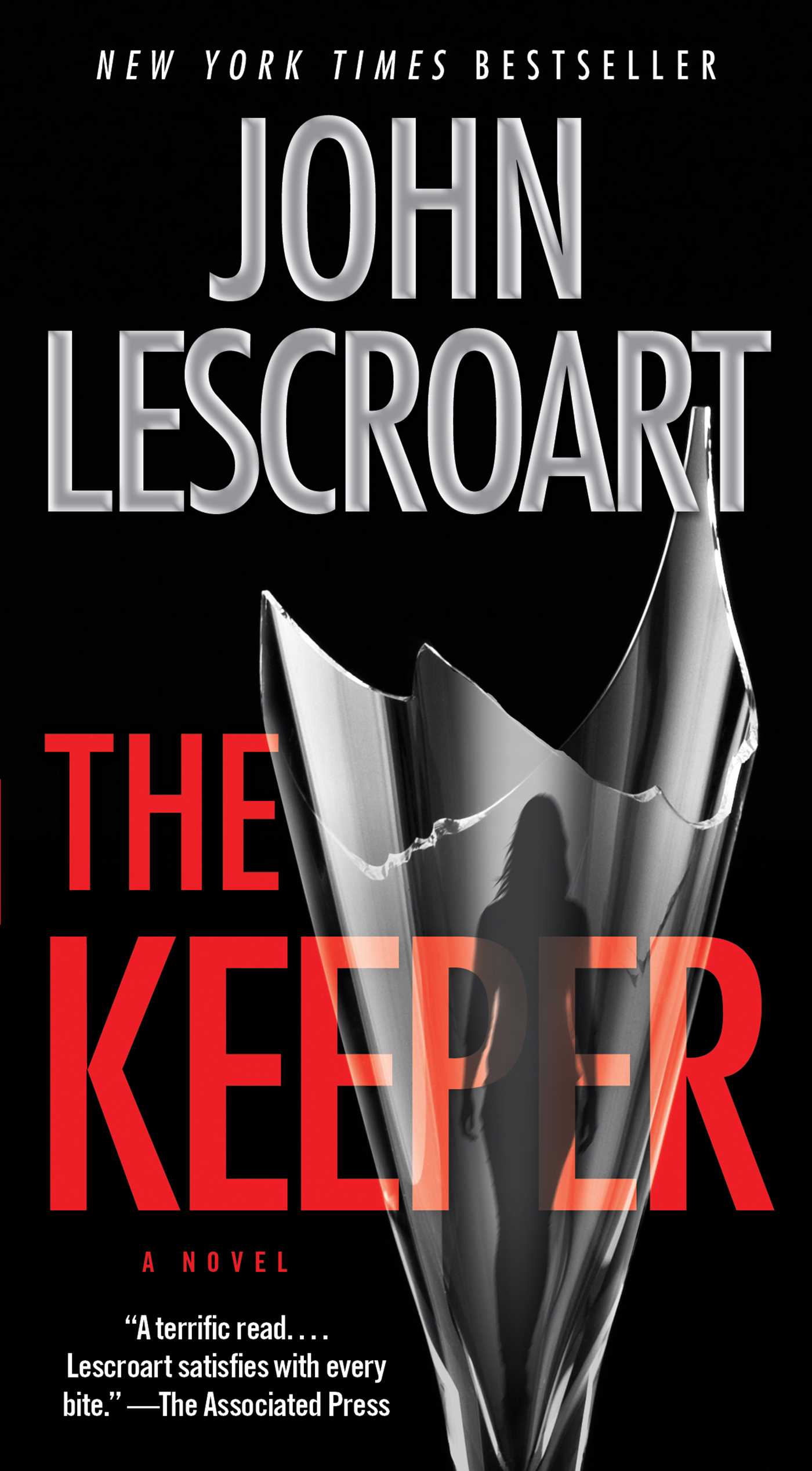 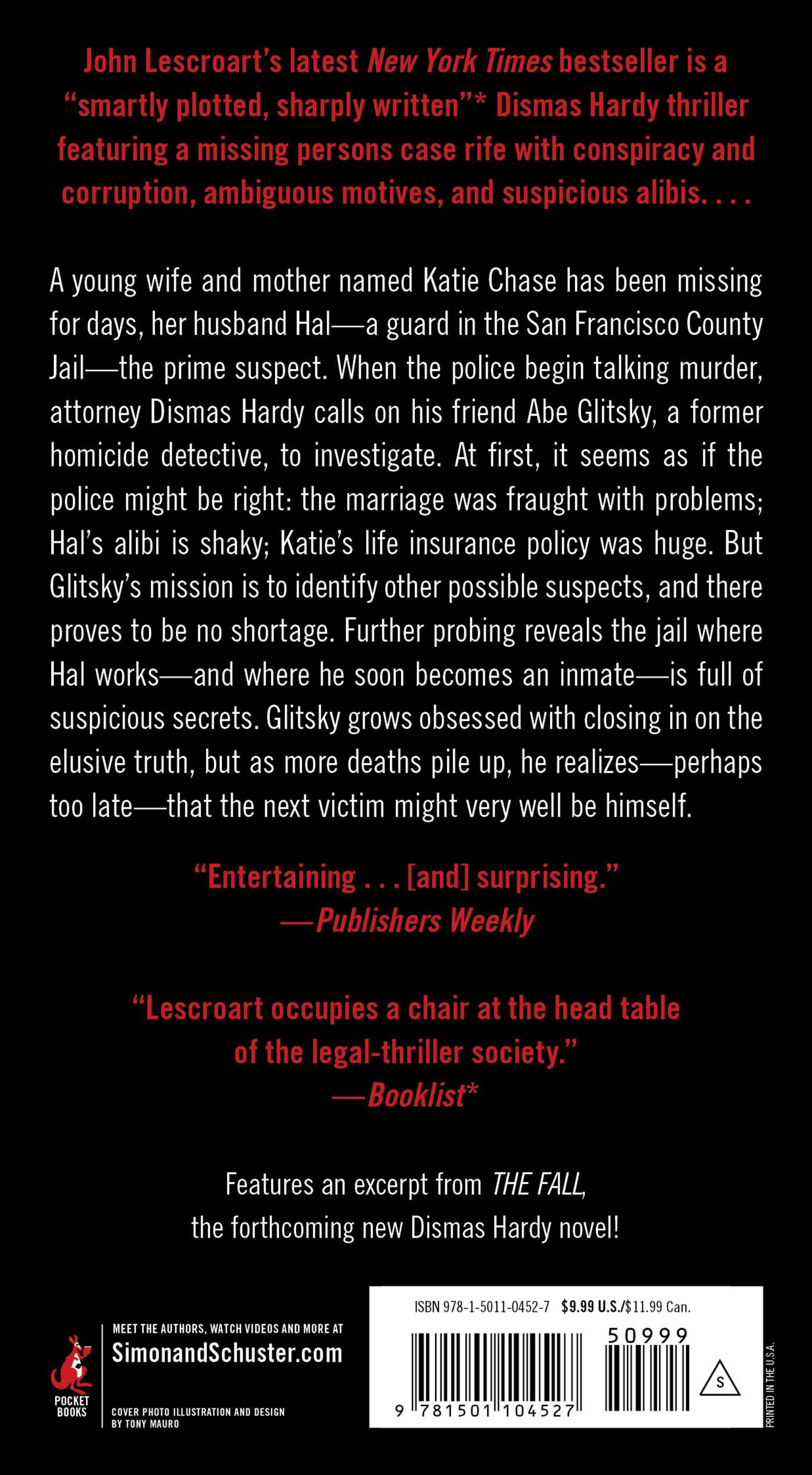 From New York Times bestselling author John Lescroart, a riveting novel featuring Dismas Hardy and Abe Glitsky on the hunt for clues about a woman who has gone missing.

On the evening before Thanksgiving, Hal Chase, a guard in the San Francisco County Jail, drives to the airport to pick up his step-brother for the weekend. When they return, Hal’s wife, Katie, has disappeared without a clue.

By the time Dismas Hardy hears about this, Katie has been missing for five days. The case strikes close to home because Katie had been seeing Hardy’s wife, a marriage counselor. By this time, the original Missing Persons case has become a suspected homicide, and Hal is the prime suspect. And the lawyer he wants for his defense is none other than Hardy himself.

Hardy calls on his friend, former homicide detective Abe Glitsky, to look into the case. At first it seems like the police might have it right; the Chases’ marriage was fraught with problems; Hal’s alibi is suspect; the life insurance policy on Katie was huge. But Glitsky’s mission is to identify other possible suspects, and there proves to be no shortage of them: Patti Orosco—rich, beautiful, dangerous, and Hal’s former lover; the still unknown person who had a recent affair with Katie; even Hal’s own step-mother Ruth, resentful of Katie’s gatekeeping against her grandchildren. And as Glitsky probes further, he learns of an incident at the San Francisco jail, where Hal works—only one of many questionable inmate deaths that have taken place there. Then, when Katie’s body is found not three blocks from the Chase home, Homicide arrests Hal and he finds himself an inmate in the very jail where he used to work, a place full of secrets he knows all too well.

Against this backdrop of conspiracy and corruption, ambiguous motives and suspicious alibis, an obsessed Glitsky closes in on the elusive truth. As other deaths begin to pile up he realizes, perhaps too late, that the next victim might be himself.

AT SEVEN-FIFTEEN on the Monday morning after Thanksgiving, Dismas Hardy sat at his dining room table, the San Francisco Chronicle spread out before him. He reached for his mug of coffee, took an all but unconscious sip, put it back down.

His wife, Frannie, coming in from the kitchen behind him, put her hands on his shoulders, then kissed the top of his head. “Are you all right?”

“I don’t know. You’re sighing just about every ten seconds.”

“Give or take.” In her bathrobe, fresh from a shower, she pulled out a chair and sat as Hardy sighed again. “Like right there,” she said. “You’re also not zipping through the paper the way you always do.”

Hardy looked down, turned a page. “Am, too.” He sat back. “Okay, so the kids stay here for five days, and the whole time I’m aware of how much space they’re taking up and the energy it takes to keep up with them, and by yesterday I am really, really ready for them to get back to their school lives and out of here. And now this morning I wake up and they’re not here and I wish they were. How does this make any sense?”

“Of course,” Hardy said. “Perfect in every way, as we’ve raised them to be. But I barely get used to seeing them and they’re gone again. Then I want them back.”

“Kids,” she said. “Can’t live with them. Can’t kill them. Meanwhile, do you think you can spare me a piece of the paper?”

Hardy sighed again. Reaching up, he tore off a corner the size of a postage stamp and slid it across to her.

“Thank you,” she said. “Now could you please spare me a section of the newspaper? Any section would be fine.”

“I know I did. That was an egregious error, and I deserved what I got.” Striking quickly, she pulled the front section over to her. “How have I tolerated living with you all these years?”

“That must be it.” She scanned the headlines, turned the page, and after a minute or two gave a quick gasp.

Hardy looked over. “What?”

But she was reading and didn’t respond. Her hand went to her mouth.

Now she looked up, puzzled and pensive. “Katie Chase,” she said. “One of my clients. It says here she’s gone missing.”

“Looks like Wednesday night.” Frannie kept scanning. “Her husband, Hal, went to pick up his brother at the airport, and when he came back, she was gone.”

“I don’t know. That’s all it says here, missing from her house.”

“Any signs of a struggle?”

“I don’t know. It doesn’t say.” She looked across at him. “She’s got two kids, Diz. One and three. That’s part of why she was seeing me.”

“What’s the other part? No, wait, let me guess. Her marriage.” Then he shook his head. “But the husband’s got an alibi.”

Frannie lifted then lowered her shoulders. “They have their problems. This just in: Raising kids isn’t easy. You said it yourself. Hal was at the airport. Maybe somebody snatched her. Maybe she ran away.”

“And left her kids?”

“Maybe they weren’t there. Maybe Hal took them with him to the airport.”

“Because toddlers are so much fun to be with? Especially at an airport. No, they were home with her.”

“So what happened to them?”

“They’re still home,” Hardy said. “They’re fine. If they weren’t, that article would have said something about it. It’s only her. She either left on her own or somebody took her. And sorry, but nobody kidnaps adults.”

Hardy finished her thought. “Either way, I admit, it’s not good. And speaking of other things not good, you should read ‘CityTalk’”—a popular daily column in the paper—“third overdose in the jail in the last three months.”

“Overdose in the jail? How do you get drugs into the jail?”

“I’m going to rule out the Tooth Fairy.” 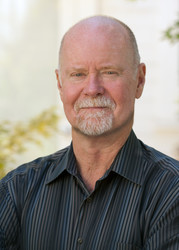 John Lescroart is the author of twenty-eight previous novels, including the New York Times bestsellers The Ophelia Cut, The Keeper, The Fall, and Fatal. His books have sold more than ten million copies and have been translated into twenty-two languages. He lives in Northern California.