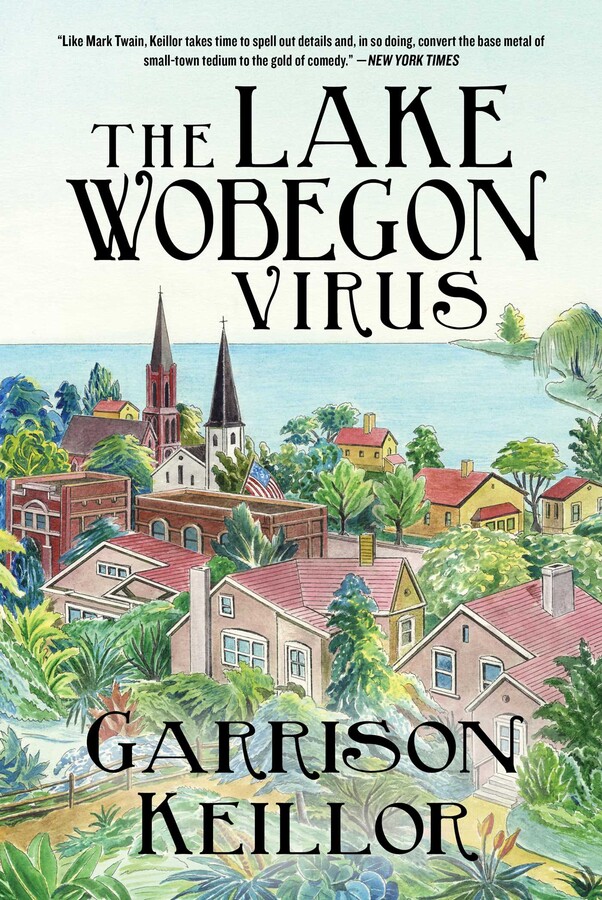 By Garrison Keillor
PRICE MAY VARY BY RETAILER

Bestselling author and humorist Garrison Keillor returns to one of America's most beloved mythical towns, beset by a contagion of alarming candor.

A mysterious virus has infiltrated the good people of Lake Wobegon, transmitted via unpasteurized cheese made by a Norwegian bachelor farmer, the effect of which is episodic loss of social inhibition. Mayor Alice, Father Wilmer, Pastor Liz, the Bunsens and Krebsbachs, formerly taciturn elders, burst into political rants, inappropriate confessions, and rhapsodic proclamations, while their teenagers watch in amazement. Meanwhile, a wealthy outsider is buying up farmland for a Keep America Truckin’ motorway and amusement park, estimated to draw 2.2 million visitors a year. Clint Bunsen and Elena the hometown epidemiologist to the rescue, with a Fourth of July Living Flag and sweet corn feast for a finale.

In his newest Lake Wobegon novel, Garrison Keillor takes us back to the small prairie town where for so long American readers and listeners have found laughter as well as the wry airing of our foibles and most familiar desires and fears—a town where, as we know, "all the women are strong, all the men are good-looking, and all the children are above average."

"It sure is great when a writer can help readers like me get through a difficult subject with humor, and Garrison manages to do this with four to five out-loud laughs per page. . . . The poetry Garrison included in this slim volume about our second favorite small town in America, Lake Wobegon, is great fun."—Cholla Needles Arts & Literary Library

Praise for the Lake Wobegon Novels
Pilgrims
"The real success of Pilgrims lies in its rich comic observation of Americans in Italy, with their strange mixture of awe at the Old World and disappointment in its poor service culture. These pilgrims, like Chaucer’s, prefer to pass the time telling stories about what they know."—The Telegraph

“In Pilgrims, Keillor weaves the same magic of his radio shows and his live appearances: He describes our own hopes and disappointments in such a way that pain and pleasure are mingled in an instant, and it’s impossible to keep from laughing.” —Santa Barbara Independent

Liberty
“Keillor began his Lake Wobegon stories back in the eighties, and the latest in the sequence, Liberty, shows an undiminished gift for catching all that is wry and understated in the mid-American sense of humour.” —The Telegraph

“This is a wonderful comic exploration of the crisis of late middle age, animated by Keillor's witty use of language.” —The Independent

“There are quite a few subplots bubbling along quietly until everything erupts in a madcap denouement that combines elements of the Keystone Kops, I Love Lucy and Monty Python. Keillor's pacing and command of smalltown plot is impeccable; just at the moment when Clint's obsession with a genealogical discovery has become unbearable, the rug gets pulled out from under him. It's a Keillor novel that does what Keillor novels do: entertain and color nicely within the lines.” —Publishers Weekly

“One of the things that makes him popular is that he doesn't seem so very different himself from the parallel-world Minnesotans whose lives he describes with such forlorn fondness. They are judged not from above, but from the side, in a way that seems neighbourly.” —The Guardian

“Like Mark Twain, Keillor takes time to spell out details and, in so doing, convert the base metal of small-town tedium to the gold of comedy. . . . Everyone knows that it’s not the joke that counts so much as how it is told, when, where and to whom, though none of these are as important as who does the telling. In the mind’s eye, the doings in Liberty are mildly amusing; in the mind’s ear, they’re hilarious.” —The New York Times

Pontoon
“With all their familiar elements, Keillor’s Lake Wobegon books have become a set of synoptic gospels, full of wistfulness and futility yet somehow spangled with hope.” —Thomas Mallon, The New York Times

“It will have you tearing through the pages.” —The Guardian

Wobegon Boy
“Keillor is trying to get at a simple truth, the vexing double whammy of modern life: it can be miserable while making you feel guilty about feeling put upon, since for most of us nothing especially bad or dramatic happens until friends and relatives start dying. Keillor is deft at using the occasion of family death to lighten the book's mood. In his best sequences, he perfectly captures the strange way that funerals can be fun—everyone is together, there's a joint excuse for warmth and all hands are on their best behavior.” —The New York Times

“As always with Keillor, a plot is the longest possible distance between two points, since he can't resist an anecdote, diversionary episode or fond recollection along the way, and these are so many and so rich that forward motion is sometimes barely visible. But who could complain about such set pieces as the death, funeral and wake of John's father, the account of the family fortune that escaped to Buenos Aires, the theological chapter on the Dark and Happy Lutherans (even the Wobegon atheists are Lutheran, for that, of course, is the faith of the God they don't believe in). Among all the fun and games is a very real sense of abiding American character and mores, a passionate devotion to qualities of courage and compassion that makes Keillor's books salutary as well as delightfully daffy.” —Publishers Weekly

“There's a laugh on virtually every page of this fresh reimagining of the young-man-up-from-the- provinces novel, even during the truly touching extended sequence that describes John's return home for his father's funeral and reconciliation with exasperating friends and relations he thought he'd seen the last of…Drollery raised to the level of genuine comic art.” —Kirkus Reviews

Leaving Home (stories)
“If Lake Wobegon defined the essential and slightly sentimentalized American town, Leaving Home portrays it in a state of flux and recombination. But though divorce, military service, and big-city money hover near the periphery, Wobegon endures, anchored in the firm conviction that you don't have to be a big shot to have a good time, that, as far as happiness goes, it doesn't get much better than having a cool beer at Wally's Sidetrack Tap. Once again, Keillor has shown himself to be in superb command of his craft, dusting and polishing American lore and idiom up to a warm glow, and handling his characters with equal measures of humor and affection.” —Kirkus Reviews

“Keillor has a rare gift for celebrating and finding humor in commonplace events, and his affection for his characters and for small-town life shines through…Some tales are wildly hilarious, others gently poignant but all are simply wonderful.” —Publishers Weekly

Lake Wobegon Days
“Lake Wobegon Days is about the way our beliefs, desires and fears tail off into abstractions—and get renewed from time to time. . . . This book, unfolding Mr. Keillor's full design, is a genuine work of American history.” —The New York Times

“A comic anatomy of what is small and ordinary and therefore potentially profound and universal in American life . . . Keillor’s strength as a writer is to make the ordinary extraordinary.” —Chicago Tribune

“Keillor’s laughs come dear, not cheap, emerging from shared virtue and good character, from reassuring us of our neighborliness and strength. . . . His true subject is how daily life is shot with grace. Keillor writes a prose that can be turned to laughter, to tears . . . to compassion or satire, to a hundred effects. He is a brilliant parodist.” —San Francisco Chronicle

By Garrison Keillor
PRICE MAY VARY BY RETAILER