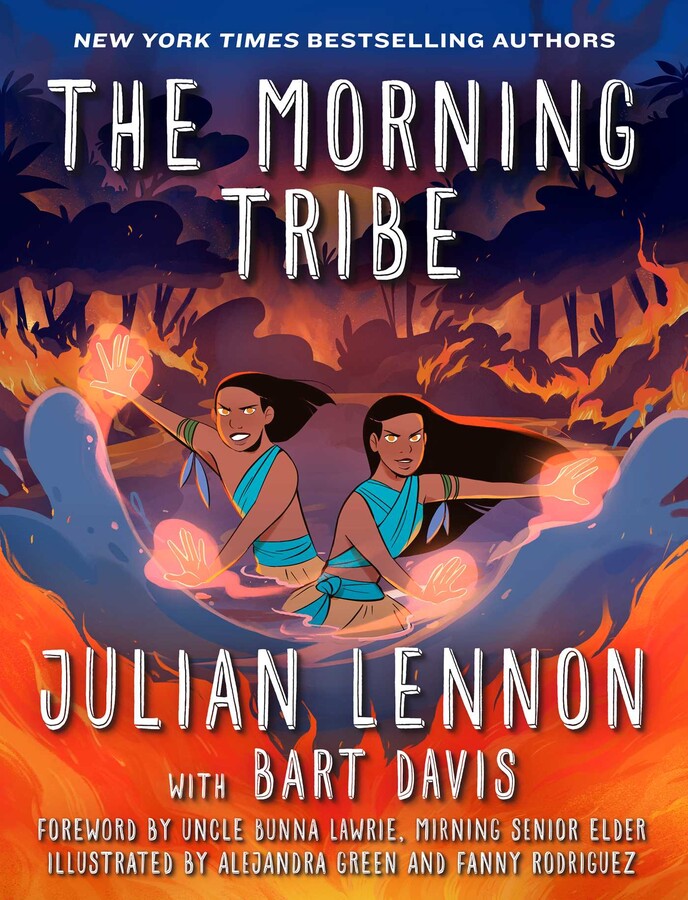 Winner of the 2021 World Literacy Award!

The Morning Tribe is a middle grade action-adventure graphic novel that showcases young people protecting our critical environment and teaches that we are all part of the struggle to save the Earth’s future and sustain the human race.

When twins Dawn and Dusk, young members of the Amazon rain forest’s Morning Tribe, discover that their homeland is being threatened by Global Agricorp mercenaries, they gather their friends and rise to the challenge of protecting it.

Though they’re naturally smart, strong, and quick, the twins also each have special abilities. Dusk is stronger, faster, and more powerful as the sun sets. Dawn is farther-sighted, a better swimmer, and a gifted acrobat as the sun rises. They are at the height of their power together at midnight.

But young Tom Toll, estranged son of Agricorp’s boss, ventures alone into the forest intent on destroying the people of the Morning Tribe, and finds himself in danger. He is saved by Dusk and Dawn and a deep bond forms between them as Tom gains an understanding not only of the forest, but of shared values and a greater global mission. When the trio of youngsters save Tom's father and the Agricorp crew, who are attempting to burn the rain forest, it changes the relationship between father and son into a positive one forever.

The Morning Tribe's theme and content derive from the work of the White Feather Foundation created in 2007 by Julian Lennon—recipient of the UNESCO 2020 Cross Cultural and Peace Crafter Award—that has been active in the rain forest for more than a decade. A portion of the proceeds from book sales will go to support the environmental and humanitarian efforts of The White Feather Foundation.

Julian Lennon is a Grammy-nominated singer-songwriter, photographer, documentarian, and philanthropist. Born in Liverpool, England, Lennon is an observer of life in all its forms developing his personal expression through his artistic endeavors. In 2007, Lennon founded the global environmental and humanitarian organization The White Feather Foundation, whose key initiatives are education, health, conservation, and the protection of indigenous culture.

Bart Davis is an international bestselling author of novels and nonfiction books. His most recent is Black and White: The Way I See It, the biography of Richard Williams, father of tennis champions Venus and Serena Williams. He has also written two feature films and a wide range of print articles. Davis lives in New York City.

“Julian Lennon does a masterful job of bringing together the appeal of a graphic novel for younger readers with an artful balance of action, meaningful dialogue, and valuable teaching on many topics, unified by a theme of environmental preservation and man-made dangers to Earth’s rainforests. Lennon unwraps issues in an engaging and empowering manner that truly inspires.” —Yolanda Kondonassis, multiple Grammy-nominated classical musician, environmental activist, and author of My Earth, My Home: A Kid’s Book About Why Protecting Our Planet Matters

"I’ve always admired Julian Lennon's singing, because for all he has seen of the world, his melodies contain such childlike wonder... his words too. Buy this book, and his words turn into actions."
–-Bono

"It's rare to find a beautiful book that speaks directly to kids, in both a playful and thoughtful way, about something as important as caring for our planet and all of its inhabitants. Touch The Earth combines this magic with true hand-to-page interactivity deftly woven into the narrative (and illustrations), creating a story I believe both kids and adults will want to read over and over again."
-–Laurie Berkner

"When a book takes you on an adventure, it's a good thing and allows you to think about something in a new way. When a book also reminds us how to treat what we have, it's even better because it's a win win. That's exactly what Julian has done with his book... he's given us a Win Win."
–-Whoopie Goldberg

"The first in Julian Lennon's White Feather Flier Adventure trilogy, Touch the Earth takes readers on a journey in a magical plane that allows them to send clean water to the thirsty, clean oceans of pollution, and 'make the world a better place.'"
–-New York Magazine

"Lennon's debut picture book, the first in a planned trilogy, asks readers to hop aboard a magical airplane, the White Feather Flier (a name inspired by his father and his own environmental and humanitarian foundation), and go on a 'helping adventure' to protect the planet's oceans and water supply. [The illustrations] ... have a sweet-natured directness that may light up younger eyes."
-–Publishers Weekly

"[Touch the Earth] is a fun book AND it’s an educational one as well.... The book helps teach kids a wonderful lesson for Earth Day and every day beyond.”
–Peanut Butter and Whine

“The artwork is beautiful... It really is stunning."
–TODAY

"I was immediately impressed with the interactive nature of the book. Although not all books lend themselves to this style, books that include elements of interactivity help resonate with kids more so when there's a lesson to be learned. Some books ask questions of kids, and some books, like this one, encourage kids to touch the picture, lean into the story, and really feel like they're in the book."
–-Motherhood Moment

"A passion project that comes from the heart, this stunningly illustrated book is inspired by the white feather he was given by his father when he was young."
–-Mom and More

"Healing the world’s ills is the mission of this gentle outreach to young children. The authors successfully engage readers in their cause without raising any alarm bells. Instead, they employ an age-appropriate, interactive format where kids are asked to touch a button icon to 'travel' to the earth’s trouble spots, including places without accessible medical care, oceans now in danger due to climate change, cities lacking sufficient green space, and disappearing rain forests. There is no call for activism—just a solid introduction to the idea that caring for our planet is a shared responsibility. The imaginary means of travel is a white feather flyer, the origin of which is explained by Lennon in the back matter. Coh’s soft hues and playful cartoon illustrations set a pleasing tone, and the spare text delivers an impactful message with just the right dose of seriousness for the intended audience. VERDICT: Suitable for Earth Day or for conversations about working together for the common good." —School Library Journal

"The affable text congratulates readers at every stop... offering a streamlined vision of the rewards of doing one's part. Set against a backdrop of calming teal tones, Coh's cheering matte pictures portray Earth's dramatic healing in bursts of vivid color. A concluding singsong poem echoes the rallying cry of Lennon's tale, which should spark productive dialogue." —Publishers Weekly, on Love the Earth