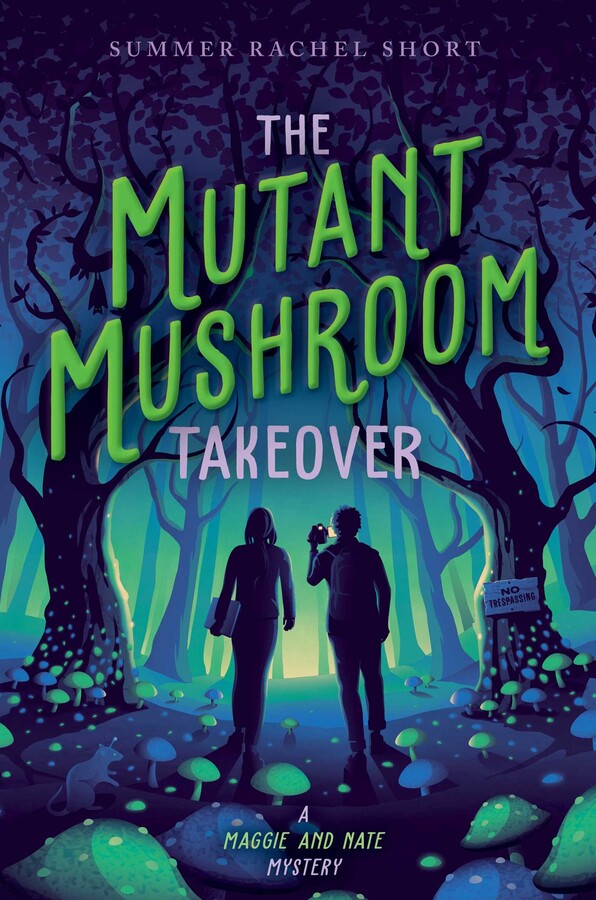 “Packed to the gills with fun.” —Kirkus Reviews

Stranger Things meets The Miscalculations of Lightning Girl in this lightly spooky debut about Maggie, an aspiring young naturalist, and her YouTuber best friend, Nate, who use their smarts and science to solve the mystery behind a mutant fungus that’s threatening the town.

Ever since Magnolia Stone’s scientist dad left Shady Pines to find a new job, Maggie’s been stuck in her gramma’s mobile home with her grumpy older brother, Ezra. Now she’s on a mission to put her family back together by winning the Vitaccino Junior Naturalist Merit Award.

When Maggie and her best friend, Nate, a wannabe YouTube star and alien conspiracy theorist, scout out a rare bioluminescent fungus, Maggie is certain she’s a shoo-in to win. But after animals around town start sprouting unusual growths and Ezra develops a bluish glow and hacking cough, Maggie wonders what they’ve really stumbled onto.

As things in Shady Pines become stranger and more dangerous, and conversations with her dad get complicated, Maggie must use her scientific smarts and Nate’s impressive knowledge of all things spooky to put things back in order and prevent these peculiar glowing mushrooms from taking over their home.

Chapter One CHAPTER ONE
This is one marvelous mutant. A bona fide scientific wonder.

The black and gold moth flutters to the overgrown honeysuckle bush. It’s the Hemaris diffinis, more commonly known as the bumblebee moth. But this is no ordinary specimen. This baby’s got a third antenna sprouting from the tip-top of its head––tall and skinny with a dusty bulb at the end.

I creep forward and focus the camera’s lens––it’s vintage 1998 and requires a little finessing. I’m milliseconds from snapping the picture of a lifetime when a door behind me bangs open. An orange sneaker zips past my nose toward the moth. The Hemaris diffinis dodges it, sailing high above my mobile home’s aluminum roof and well out of photographic range.

I whirl around. “Nate Fulton! Are you trying to ruin my life?”

“What?” Nate frowns, his face so red in the blazing Texas heat that his freckles nearly go camo. “I probably just saved your life, Mags. Remember what happened to my Uncle Tony last summer? Nearly died when that swarm of bees went up his swim trunks. Stung his butt, like, a hundred times. Got anna-flap-tick shock.”

“It’s anaphylactic, and that wasn’t a bee. It was an ultra-rare mutant moth. I needed that photo!”

“For the contest thing?” Nate retrieves the sneaker and stuffs his toes back inside.

“It’s more than a contest. It’s Vitaccino’s Junior Naturalist Merit Award. There’s five hundred big ones at stake, plus a meeting with the head honchos. For the winners, anyway.” I scan the sky. The moth is nowhere to be seen. I slump to the ground and lean my back against the side of the trailer. Without the Hemaris diffinis, there’s no Merit Award and zero chance to make my case in front of the board of directors. My one shot for smoothing things over for Dad and bringing him back home to Shady Pines.

Nate straightens his Darth Vader ball cap. “I didn’t know it was a mutant moth. I’m no bugologist or anything.”

“Entomologist.” I rip a honeysuckle from the vine.

Nate rocks forward on his toes. “I know something that’ll cheer you up.”

I sip the honeysuckle’s syrupy nectar. “What if I don’t want to cheer up?”

I sigh. Nate’s intel could be anything from finding half a pack of gum in his shorts to buying a rare issue of Midnight Kingdom at the comic book store. “Spill it.”

Nate looks over his shoulder and drops his voice. “Not here.”

I follow his gaze. Glory, Nate’s hefty basset hound, is passed out in the weedy grass in front of his place. Otherwise, the trailer park is deserted.

“Headquarters.” He nods to the tree house between our trailers. The roof is rusty siding and the walls are discarded plywood. All of it’s held together with a combination of duct tape, nails, and bungee cords. It doesn’t look like much on the outside, but behind those walls are treasures like binoculars, fun-size bags of chips, and loads of old Nat Geo magazines. Our own private paradise.

Normally I’d shoot up that ladder like nobody’s business, but Shady Pines summers are brutal. Sweat’s already dripping down my back from chasing the bumblebee moth and I’m not sure I feel like hauling up the rope ladder for a bit of alleged news. “Pass.” I tug my knees to my chest. This wasn’t my first try for a prize-worthy photo, but those got botched too. Turns out opening the film canister to check on things is a big no-no with these old-timey cameras. That moth was my last hope.

Nate raises one hand, shielding his eyes. “Her death-ray glare… saps the life from my… bones.” He stumbles forward with a moan like he’s dying a slow, torturous death.

When I don’t say anything, he cracks one eye open. “I’m dying here, Mags. You really want that on your conscience?”

I should probably stay mad to teach Nate to quit butting in where he doesn’t belong, but I know he’s got a bottomless repertoire of dramatic noises he’ll unleash until I give in. “Fine. You’re forgiven.”

I thrust out one arm.

Nate grabs my hand and pulls me up. “You’re a lifesaver, Mags.”

“Uh-huh.” I trudge up the tree house ladder. “This better be worth it.”

“Oh, it is,” he promises as we slide onto the well-worn wooden slats at the top. Up here, we can see half the town––from Marble Falls, the fancy-pants neighborhood with the bad luck to share a border with Raccoon Creek Trailer Park, to the humongous green forest beyond.

I squish down into a red beanbag chair. “So, what’s the big scoop?”

“You’re gonna love it.” Nate grins. “My cousin Ricky came over this afternoon while I was nuking some corn dogs. He said he and his buddies were passing by Old Man Bell’s woods last night. Minding their own business, more or less. They saw something, Maggie. I’m talking confirmed paranormal phenomenon.” His eyes go all wide and mysterious, like the time he was sure aliens were making crop circles in Jerry Able’s cornfields. “Ghost lights.”

I stretch out my legs and cross my ankles. Ricky’s fourteen, and all he talks about are girls and racing his beat-up dirt bike. “It’s probably just security lights. All the houses in Marble Falls are getting them.”

“Ricky said the forest was glowing green and blue. The guys didn’t get too close, but Ricky was pretty sure the trees were moaning his name. This thing has The Conspiracy Squad written all over it.”

I should’ve known this had something to do with Nate’s YouTube channel. Every couple of weeks he puts out a new video and I usually get roped into it somehow or other. Last month it was snooping around the Thurston County Animal Shelter on the hunt for werewolves. It was a bust. But we did get to snuggle some super adorable calico kittens. Nate’s convinced The Conspiracy Squad is gonna go viral someday soon and rake in the big bucks. And maybe it will. But right now he’s only got about five subscribers, plus a few wack jobs who leave comments about Martians communicating with them through the fillings in their teeth.

Nate seems to read the hesitation on my face and starts up again. “You can’t pass up an opportunity like this. It’s once-in-a-lifetime good. Old Man Bell’s woods are already creepy and probably haunted by, like, a bajillion ghosts.”

“How’s that a selling point?”

“Uh, ’cause it sounds totally awesome. And now that we’ve got solid reports of paranormal happenings, we’d be nuts not to check it out.”

I don’t believe in ghosts, but the place does stir something cold and creaky in the pit of my stomach. Around town there are a thousand different rumors about the old man and his land. Some say the place is cursed and that strange people walk the woods at night. Others say he catches kids and cooks them up in his oven, like the witch from Hansel and Gretel. Either way, I’ve always steered clear.

Nate cracks his knuckles. “What do you say, Mags? You in?”

“Those woods have NO TRESPASSING signs all around them. I can’t risk getting busted. They don’t give Merit Awards to eleven-year-old criminals. Besides, I’ve gotta finish my application.” Though without the pictures of the bumblebee moth, I’ll need to come up with something else quick. The application has to be postmarked by tomorrow.

“You wanna study bugs and trees, right? What better place to go than Old Man Bell’s ginormous woods? I’m practically handing you your Junior Science Nerd badge on a platter.”

“There’s no badge. It’s a cash prize and a meeting with the board, remember?”

“Whatever.” He spins his hat around backward. “Are you going to investigate with me or not?”

I strum my fingers on the wooden floor. Nate has a point. Old Man Bell’s woods offer hundreds of acres of unexplored wildlife. “We’d have to be in and out. Snap a few photos and then scram.”

Nate steeples his fingers like an evil genius plotting his Greater Thurston County takeover. “Assemble our gear and meet outside Headquarters after sundown. We’ve got to be ready for anything. Ghosts, vampires, aliens.”

“Or security lights. Don’t forget about that possibility.”

Nate reaches for the rope ladder. “Rendezvous at twenty-one-hundred hours.”

“Is that nine or ten o’clock?”

“Couldn’t you just tell me?”

Nate’s already halfway down the ladder. “And don’t forget the garlic!”

I hang my head over the edge of the tree house. “Garlic?”

“In case of glowing vampires. Sheesh Mags, stay with me.”

Nate drops to the ground and trots off to his trailer. As I head down the ladder, there’s a hum in the distance. Right on schedule, a crop duster flies low over Old Man Bell’s land. White rains down from the little plane. I’ve always wondered why a place that doesn’t produce any crops needs a daily dose of herbicides or whatever’s in that thing. But who knows what Old Man Bell’s thinking? He’s an eccentric hermit. Maybe he just really hates weeds. 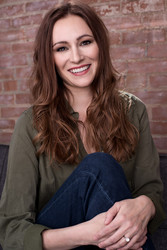 Summer Rachel Short lives in north Texas with her husband, three kids, and their Maine Coon cat, Emme. Before spinning tales about mutant mushrooms, she worked as a science reporter for her university’s newspaper, where she wrote on topics including nanotech tweezers, poultry farm pollution, and the nighttime habits of spiders and snakes. Summer can often be found exploring new places with her family and dreaming up ideas for her next book. Learn more at SRachelShort.com.

"Packed to the gills with fun."

"A fun debut novel with an action-packed climax that will leave readers eager to scope out the weirder side of nature."