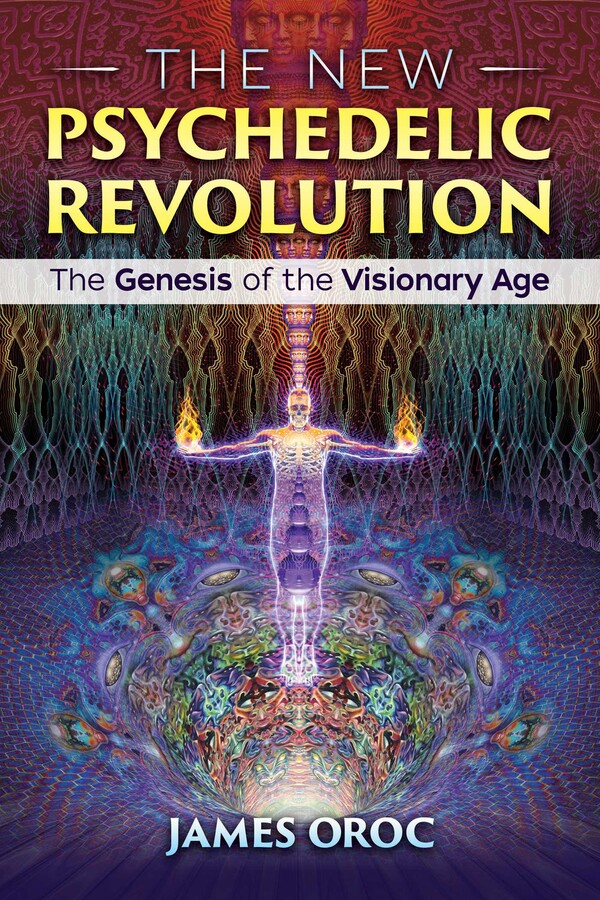 The Genesis of the Visionary Age

A bold exploration of modern psychedelic culture, its history, and future

• Investigates the use of microdosing in extreme sports, the psy-trance festival experience, and the relationship between the ego, entheogens, and toxicity

• Presents a “History of Visionary Art,” from its roots in prehistory, to Ernst Fuchs and the Vienna School of the Fantastic, to contemporary psychedelic art

After the dismantling of a major acid laboratory in 2001 dramatically reduced the world supply of LSD, the psychedelic revolution of the 1960s appeared to have finally run its course. But the opposite has actually proven to be true, and a psychedelic renaissance is rapidly emerging with the rise in popularity of transformational festivals like Burning Man and BOOM!, the return to positive media coverage of the potential benefits of entheogens, and the growing number of celebrities willing to admit the benefits of their own personal use. Along with the return of university research, the revival of psychedelic philosophy, and the increasing popularity of visionary art, these new developments signify the beginning of a worldwide psychedelic cultural revolution more integrated into the mainstream than the counterculture uprising of the 1960s.

In his latest book, James Oroc defines the borders of 21st-century psychedelic culture through the influence of its three main architects-- chemist Alexander Shulgin, mycologist Terence McKenna, and visionary artist Alex Grey--before illustrating a number of facets of this “Second Psychedelic Revolution,” including the use of microdosing in extreme sports, the tech-savvy psychedelic community that has arisen around transformational festivals, and the relationship between the ego, entheogens, and toxicity. This volume also presents for the first time a “History of Visionary Art” that explains its importance to the emergence of visionary culture.

Exploring the practical role of entheogens in our selfish and fast-paced modern world, the author explains how psychedelics are powerful tools to examine the ego and the shadow via the transpersonal experience. Asserting that a cultural adoption of the entheogenic perspective is the best chance that our society has to survive, he then proposes that our ongoing psychedelic revolution--now a century old since the first synthesis of a psychedelic in 1918--offers the potential for the birth of a new Visionary Age.

For those unfamiliar with the effects of psychedelics (or more specifically of LSD and psilocybin mushrooms) at a wide range of dosages, the title of this chapter may seem like an obvious contradiction--for what connection could there possibly be between these infamous “hallucinatory” compounds and the obviously highly coordinated physical pursuit of the unfortunately named “extreme sports”? Based on the tangled reputation that LSD has had since the mid-1960s it would seem impossible to believe that various experienced individuals have climbed some of the hardest big walls in Yosemite, heli-skied first descents off Alaskan peaks, 3 competed in world-class snow-boarding competitions, raced moto-cross bikes, surfed enormous Hawaiian waves, flown hang-gliders above 18,00 feet, or climbed remote peaks in the Rockies, the Alps, the Andes, and even above 8,000 meters in the Himalayas--all while under the influence of LSD. However in the often outlaw underground culture of extreme sports, the use of LSD or psilocybin mushrooms while skiing, snowboarding, mountain-biking, surfing, skateboarding, and so on, is in fact common throughout North American ski-and-sports towns, where they enjoy an almost sacred reputation. According to the legends of this tight-knit underground, many incredible feats have been accomplished by modern extreme-athletes whilst under the influence of psychedelics--a fact, which for obvious reasons, generally never gets recorded in the record books.

The reason for this radical disparity between the popular perception about the disabling effects of psychedelics and their apparent common usage amongst the fringes of the extreme sports community is mostly a matter of dosage and historical familiarity. LSD is extraordinarily potent, effective on the human physiology in the millionths of grams (μg), and very small differences in dosage can lead to dramatically different effects. In the first decade of LSD research it was commonly known and accepted that there was a wide-range of “LSD intoxication” that occurred across the range of dosage (20μg –1500μg+), with only the mid-tohigher dosages producing what became known as “psychedelic” effects. At the lower dosages, a state known as “psycholotic” was also recognized, where in many cases cognitive functioning, emotional balance, and physical stamina were actually found to be improved.

This recognition of the varying effects of LSD was lost after the popular media demonized LSD with the help of the various myths and excesses of the ’60s “Love Generation.” When LSD made the jump from the clinic to the underground, its early explorers were 4 universally fascinated with the higher dosage entheogenic experience, while the more subtle effects at lower dosages were largely forgotten or ignored. The first “street” LSD in the 1960s was thus generally between 250μg and 500μg, a potency powerful enough to guarantee the casual user a truly psychedelic experience. LSD is somewhat unusual however in that a user can build a fast tolerance to the compound after regular (daily use), and while one’s initial experiences on even a single dose can be dramatic, before long veteran “acid-heads” may be increasing their own dosage ten-fold--thus requiring much stronger hits than the average user. It was the high dosage of this early street acid, in combination with the complete ignorance of its early users, that would be responsible for the high number of “acid-casualties” that gave LSD is fearsome reputation. However, by the 1980s both Deadheads and the Acid-House generation had realized to drop the dosage of street acid to between 100-125 μg. These days a hit may be as low as 50 μg … or as little as 10 percent as powerful as a hit of 1960s acid, which is a dosage well below the true psychedelic threshold for most people and, for an experienced user suitably inclined, can certainly fall within the psycholotic category.

There was always a strong contingent of experienced psychedelic users among the extreme sports community due to the little realized fact that the seeds of the extreme sports revolution were actually planted with the dismantling and dispersal of Psychedelic Culture in the late 1960s and early 1970s. As countless numbers of counter-culture refuges left the major cities and moved out to small towns in the country in the Back-to-the-Land movement, most were looking for new paths to fulfillment after the spectacular promises of the brief Psychedelic Age had failed and a new age of uppers and downers was emerging.

These “hippies” bought with them a newly found cultural respect for the land that had come directly from the use of psychedelics, since the use of psychedelics in nature inevitably 5 increases the spiritual appreciation of one’s role in nature, and of Nature itself. (There are many commentators today who believe that the modern environmental movement was born out of the fact that 25 million people took LSD in the late 1960s.)

At the same time as this sudden influx of these “freaks” to the beaches, deserts, and mountains of the world, technological advances in minor cult-like sports were suddenly allowing ordinary individuals unprecedented access to the wildernesses of the world--in the mountains, the ocean, and even the air--as a new kind of athlete took the concept of “finding oneself in the wilds” to a whole new definition. The invention of these highly individualistic sports (such as surfing, skateboarding, snowboarding, BASE jumping, tow-in surfing) that sought to use existing terrain in new and inventive ways generally raised the ire of the status quo, and so most extremesports begin life as “outlaw sports” of some kind or another, with their participants regarded as rebels. The attraction of these types of sports for the newly arrived psychedelic-era refugees is obvious, and most of the leading figures of this era were clearly cultural rebels living well outside of the norms of society. For this particular branch of the psychedelic tree, the oceans, deserts, and great mountains of the world were now being recognized as the ultimate “set and setting”--a realization common to mystics and sadhus since the beginning of recorded time.

Journalist, photographer, and artist James Oroc was born in the small South Pacific nation of Aotearoa. Since 1998 he has been pursuing and reporting on the cutting edge of extreme sports in more than 40 countries around the globe, his work appearing in magazines, films, and on MTV Sports. He has been a member of the Burning Man community since 1999, and he is also involved in the documentation and advancement of “Alternative Culture.” Oroc resides in the Dominican Republic.

– Alex Grey, artist and author of Sacred Mirrors and Net of Being

“Compelling, adventurous, and visionary, this book is packed with fascinating and useful information and inspiration. James Oroc is a fine storyteller as he leads us through a twisty tale that is part personal odyssey, part well-researched ramble through the past and present of psychedelic art and culture, and part love letter to humanity and our potential for awakening to the wonder and beauty of life.”

“James Oroc’s book is a timely reminder to translate our psychedelic visionary insights into action: to make our minds manifest. Oroc proposes that we can create the future we want to live.”

“An important and fascinating book for anyone interested in the bold psychedelic visionaries whose work and legacies will continue to shape and be felt by our culture for generations to come. Oroc explores the practical application of psychedelics in the modern world and advocates the immense value that they bring.”

"The New Psychedelic Revolution is the most comprehensive book covering emerging psychedelic culture, from the interaction entheogens, to visionary art and psychedelic culture. It’s definitely worth the read, and I can assure that you’ll gain insights are hard to find elsewhere without direct experience!"

The Genesis of the Visionary Age