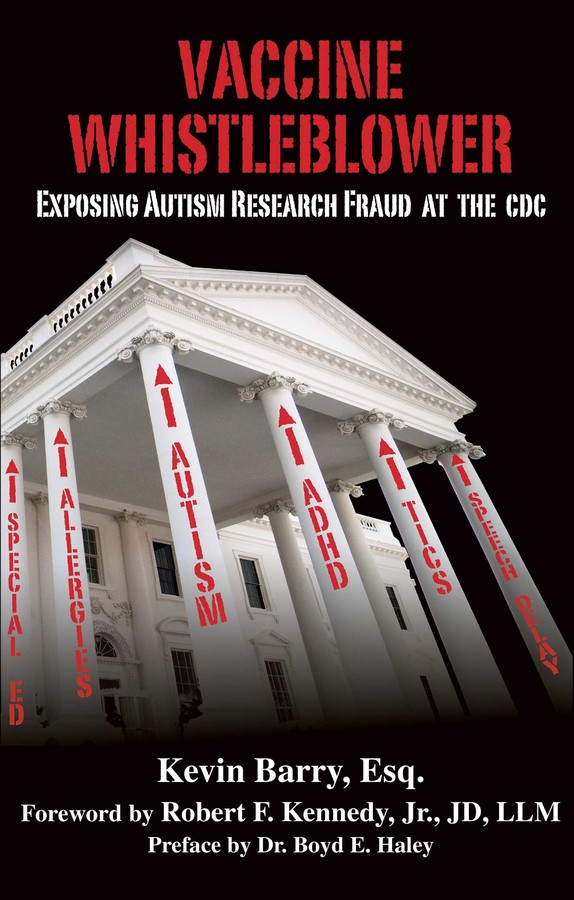 Vaccine Whistleblower is a gripping account of four legally recorded phone conversations between Dr. Brian Hooker, a scientist investigating autism and vaccine research, and Dr. William Thompson, a senior scientist in the vaccine safety division at the Centers for Disease Control and Prevention (CDC).
Thompson, who is still employed at the CDC under protection of the federal Whistleblower Protection Act, discloses a pattern of data manipulation, fraud, and corruption at the highest levels of the CDC, the federal agency in charge of protecting the health of Americans. Thompson states, “Senior people just do completely unethical, vile things and no one holds them accountable.”
This book nullifies the government’s claims that “vaccines are safe and effective,” and reveals that the government rigged research to cover up the link between vaccines and autism. Scientific truth and the health of American children have been compromised to protect the vaccine program and the pharmaceutical industry.
The financial cost of the CDC’s corruption is staggering. The human cost is incalculable. Vaccine Whistleblower provides context to the implications of Thompson’s revelations and directs the reader to political action.

“You’ve had a definitive test as far as I’m concerned regarding Thimerosal safety. I mean, that study that Bill Thompson performed at the CDC in 2007. It was published in the New England Journal of Medicine.[It] was a wonderful study. I think that stands as a definitive study.”
—DR. PAUL A. OFFIT, the Children’s Hospital of Philadelphia,
interview in the film Trace Amounts
“I don’t know why they still give it [flu shots with Thimerosal] to pregnant women—that’s the last person I would give mercury to . . . Thimerosal causes tics . . . do you think a pregnant mother would take a vaccine that they knew caused tics? . . . Absolutely not! I would never give my wife a vaccine that I thought caused tics.”
—DR. WILLIAM THOMPSON, CDC senior scientist, author of multiple studies used to claim Thimerosal is safe, recorded phone conversation with Dr. Brian Hooker, May 8, 2014
“Now, we all know that vaccines can occasionally cause fevers in kids. So if a child was immunized, got a fever, had other complications from the vaccines. And if you’re predisposed with the mitochondrial disorder, it can certainly set off some damage. Some of the symptoms can be symptoms that have characteristics of autism.”
—DR. JULIE GERBERDING, CDC director (2001–2009), president, Merck Vaccines (2009–present), interview with Sanjay Gupta on CNN, March 29, 2008
“The CDC can’t solve a problem they helped start. It’s too risky to admit they have been wrong about mercury/Thimerosal. They are corrupt.”
—JIM CARREY, actor, via Twitter
“It’s hard to defend any of these actions [described by Dr. William Thompson about the internal workings of the CDC] and I am troubled because I worked hard with distinguished partners over six years to significantly increase the effectiveness of CDC vaccine safety. My efforts were rejected by both Bush and Obama [administrations]. The Thompson material is an incident and without support from his old or current colleagues will not motivate the CDC [to] reevaluate its program. I will continue to follow developments. We all know that the child vaccine program has significantly increased and that there are some children who will be affected. Predicting who is the ongoing challenge for the CDC and FDA.”
—BOB WRIGHT, cofounder and chairman of the board of Autism