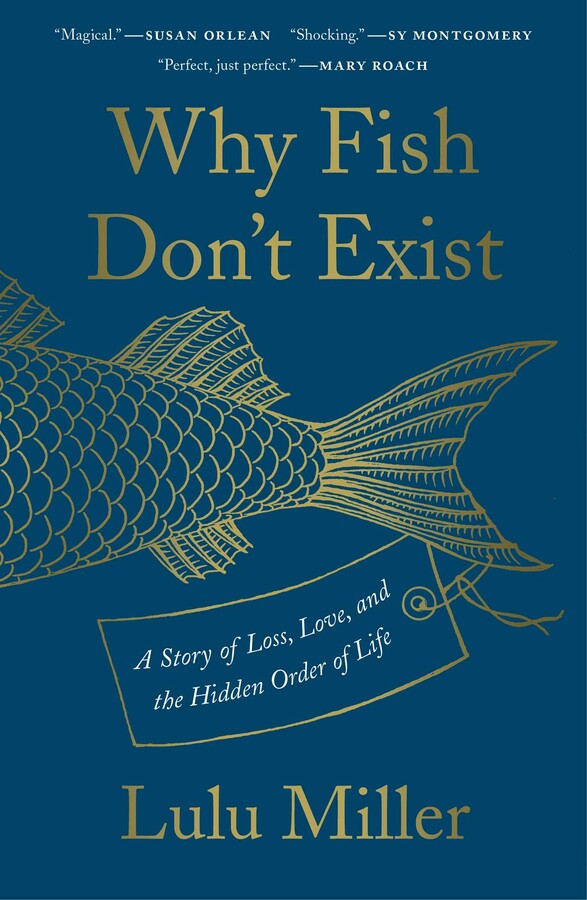 A Story of Loss, Love, and the Hidden Order of Life

By Lulu Miller
PRICE MAY VARY BY RETAILER

“At one point, Miller dives into the ocean into a school of fish…comes up for air, and realizes she’s in love. That’s how I felt: Her book took me to strange depths I never imagined, and I was smitten.” —The New York Times Book Review

David Starr Jordan was a taxonomist, a man possessed with bringing order to the natural world. In time, he would be credited with discovering nearly a fifth of the fish known to humans in his day. But the more of the hidden blueprint of life he uncovered, the harder the universe seemed to try to thwart him. His specimen collections were demolished by lightning, by fire, and eventually by the 1906 San Francisco earthquake—which sent more than a thousand discoveries, housed in fragile glass jars, plummeting to the floor. In an instant, his life’s work was shattered.

Many might have given up, given in to despair. But Jordan? He surveyed the wreckage at his feet, found the first fish that he recognized, and confidently began to rebuild his collection. And this time, he introduced one clever innovation that he believed would at last protect his work against the chaos of the world.

When NPR reporter Lulu Miller first heard this anecdote in passing, she took Jordan for a fool—a cautionary tale in hubris, or denial. But as her own life slowly unraveled, she began to wonder about him. Perhaps instead he was a model for how to go on when all seemed lost. What she would unearth about his life would transform her understanding of history, morality, and the world beneath her feet.

Part biography, part memoir, part scientific adventure, Why Fish Don’t Exist is a wondrous fable about how to persevere in a world where chaos will always prevail.


Picture the person you love the most. Picture them sitting on the couch, eating cereal, ranting about something totally charming, like how it bothers them when people sign their emails with a single initial instead of taking those four extra keystrokes to just finish the job—
Chaos will get them.
Chaos will crack them from the outside—with a falling branch, a speeding car, a bullet—or unravel them from the inside, with the mutiny of their very own cells. Chaos will rot your plants and kill your dog and rust your bike. It will decay your most precious memories, topple your favorite cities, wreck any sanctuary you can ever build.
It’s not if, it’s when. Chaos is the only sure thing in this world. The master that rules us all. My scientist father taught me early that there is no escaping the Second Law of Thermodynamics: entropy is only growing; it can never be diminished, no matter what we do.
A smart human accepts this truth. A smart human does not try to fight it.
But one spring day in 1906, a tall American man with a walrus mustache dared to challenge our master.
His name was David Starr Jordan, and in many ways, it was his day job to fight Chaos. He was a taxonomist, the kind of scientist charged with bringing order to the Chaos of the earth by uncovering the shape of the great tree of life—that branching map said to reveal how all plants and animals are interconnected. His specialty was fish, and he spent his days sailing the globe in search of new species. New clues that he hoped would reveal more about nature’s hidden blueprint.
For years he worked, for decades, so tirelessly that he and his crew would eventually discover a full fifth of fish known to man in his day. By the thousand he reeled in new species, dreaming up names for them, punching those names into shiny tin tags, dropping the tags alongside their specimens into jars of ethanol, slowly stacking his discoveries higher and higher.
Until one spring morning in 1906, an earthquake struck and toppled his shimmering collection to the ground.
Hundreds of jars shattered against the floor. His fish specimens were mutilated by broken glass and fallen shelves. But worst of all were the names. Those carefully placed tin tags had been launched at random all over the ground. In some terrible act of Genesis in reverse, his thousands of meticulously named fish had transformed back into a heaping mass of the unknown.
But as he stood there in the wreckage, his life’s work eviscerated at his feet, this mustachioed scientist did something strange. He didn’t give up or despair. He did not heed what seemed to be the clear message of the quake: that in a world ruled by Chaos, any attempts at order are doomed to fail eventually. Instead, he rolled up his sleeves and scrambled around until he found, of all the weapons in the world, a sewing needle.
He took the needle between his thumb and forefinger, laced it with thread, and aimed it at one of the few fish he recognized amid the destruction. With one fluid movement, he plunged the needle through the flesh at the fish’s throat. Then he used the trailing thread to stitch a name tag directly to the flesh itself.
For each fish he could salvage, he repeated this tiny gesture. No longer would he let the tin tags sit precariously in the jars. Instead, he sewed each name directly to the creature’s skin. A name stitched to its throat. To its tail. To its eyeball. It was a small innovation with a defiant wish, that his work would now be protected against the onslaughts of Chaos, that his order would stand tall next time she struck.

When I first heard about David Starr Jordan’s attack on Chaos, I was in my early twenties, starting out as a science reporter. Instantly, I assumed he was a fool. The needle might work against a quake, but what about fire or flood or rust or any of the trillion modes of destruction he hadn’t thought to consider? His innovation with the sewing needle seemed so flimsy, so shortsighted, so magnificently unaware of the forces that ruled him. He seemed to me a lesson in hubris. An Icarus of the fish collection.
But as I grew older, as Chaos had her way with me, as I made a wreck of my own life and began to try to piece it back together, I started to wonder about this taxonomist. Maybe he had figured something out—about persistence, or purpose, or how to go on—that I needed to know. Maybe it was okay to have some outsized faith in yourself. Maybe plunging along in complete denial of your doomed chances was not the mark of a fool but—it felt sinful to think it—a victor?
So, one wintry afternoon when I was feeling particularly hopeless, I typed the name David Starr Jordan into Google and was met with a sepia photograph of an old white man with a bushy walrus mustache. His eyes looked a little hard.
Who are you? I wondered. A cautionary tale? Or a model of how to be?
I clicked through to more pictures of him. There he was as a boy, suddenly lamblike, with spilling dark curls and protruding ears. There he was as a young man, standing upright in a rowboat. His shoulders had filled out and he was biting his lower lip in a way that could almost be classified as sultry. There he was as a grandfatherly old man, sitting in an armchair, scratching a shaggy, white dog. I saw links to articles and books he had written. Fish-collecting guides, taxonomic studies of the fishes of Korea, of Samoa, of Panama. But there were also essays about drinking and humor and meaning and despair. He had written children’s books and satires and poems and, best of all, for the lost journalist seeking guidance in the lives of others, an out-of-print memoir called The Days of a Man, packed tight with so many details about said days of said man it had to be broken into two volumes. It was nearly a century out of print, but I found a used-book dealer who would sell it to me for $27.99.
When the package arrived, it felt warm, enchanted. As if it contained a treasure map. I slid a steak knife through the packing tape, and two olive-green tomes spilled out, each glittering with gold letters. I made a huge pot of coffee and sat down on the couch, the first volume on my lap, ready to find out what becomes of you when you refuse to surrender to Chaos. 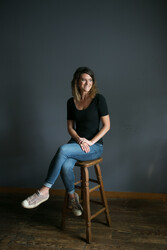 Lulu Miller is the cohost of Radiolab, cofounder of NPR’s Invisibilia, and a Peabody Award–winning science journalist. Her writing has been published in The New Yorker, VQR, Orion, Electric Literature, Catapult, and beyond. Her favorite spot on earth is Humpback Rocks.

“What a delightful book... Ms. Miller [spins] a tale so seductive that I read her book in one sitting.”
— The Wall Street Journal

“Some years back, Lulu Miller disappeared down a very strange rabbit hole that led her to places neither she nor you would ever be able to anticipate. I highly recommend you follow her down the hole, because of her singular and gigantic gifts as a writer and storyteller, but also because of what's down there: love, chaos, strychnine, a gun, dangerous delusions, heroic dandelions, a cow, a snorkel mask through which grander truths are revealed... This book is perfect, just perfect. It's both lyrical and learned, personal and political, small and huge, quirky and profound.”
— Mary Roach, New York Times bestselling author of Stiff

“I want to live at this book’s address: the intersection of history and biology and wonder and failure and sheer human stubbornness. What a sumptuous, surprising, dark delight.”
— Carmen Maria Machado, author of Her Body and Other Parties

“A great escape… [and] an extended reflection on how to weather the storm during trying times.”
— Outside

“Unconventional… What initially seems like an homage to an indomitable scientist [turns] into a philosophical tale about the limitations of tidy narratives and the dangers of unyielding belief.”
— Undark

“Riveting. Surprising. Shocking, even! Why Fish Don’t Exist begins with a mesmerizing account of the life of distinguished biologist David Starr Jordan—and then, quite unexpectedly, turns into so much more. Narrated in Lulu Miller’s intimate, quirky voice, this is a story of science and struggle, of heartbreak and chaos. This book will capture your heart, seize your imagination, smash your preconceptions, and rock your world.”
— Sy Montgomery, New York Times bestselling author of The Soul of an Octopus

“Lulu Miller moves gracefully between reporting and meditation, big questions and small moments. This book is a magical hybrid of science, portraiture, and memoir — and a delight to read.”
— Susan Orlean, New York Times bestselling author of The Library Book

“Stunning and brilliant and completely un-sum-up-able… I love this book so much!”
— John Green, New York Times bestselling author of Turtles All the Way Down

A Story of Loss, Love, and the Hidden Order of Life

By Lulu Miller
PRICE MAY VARY BY RETAILER