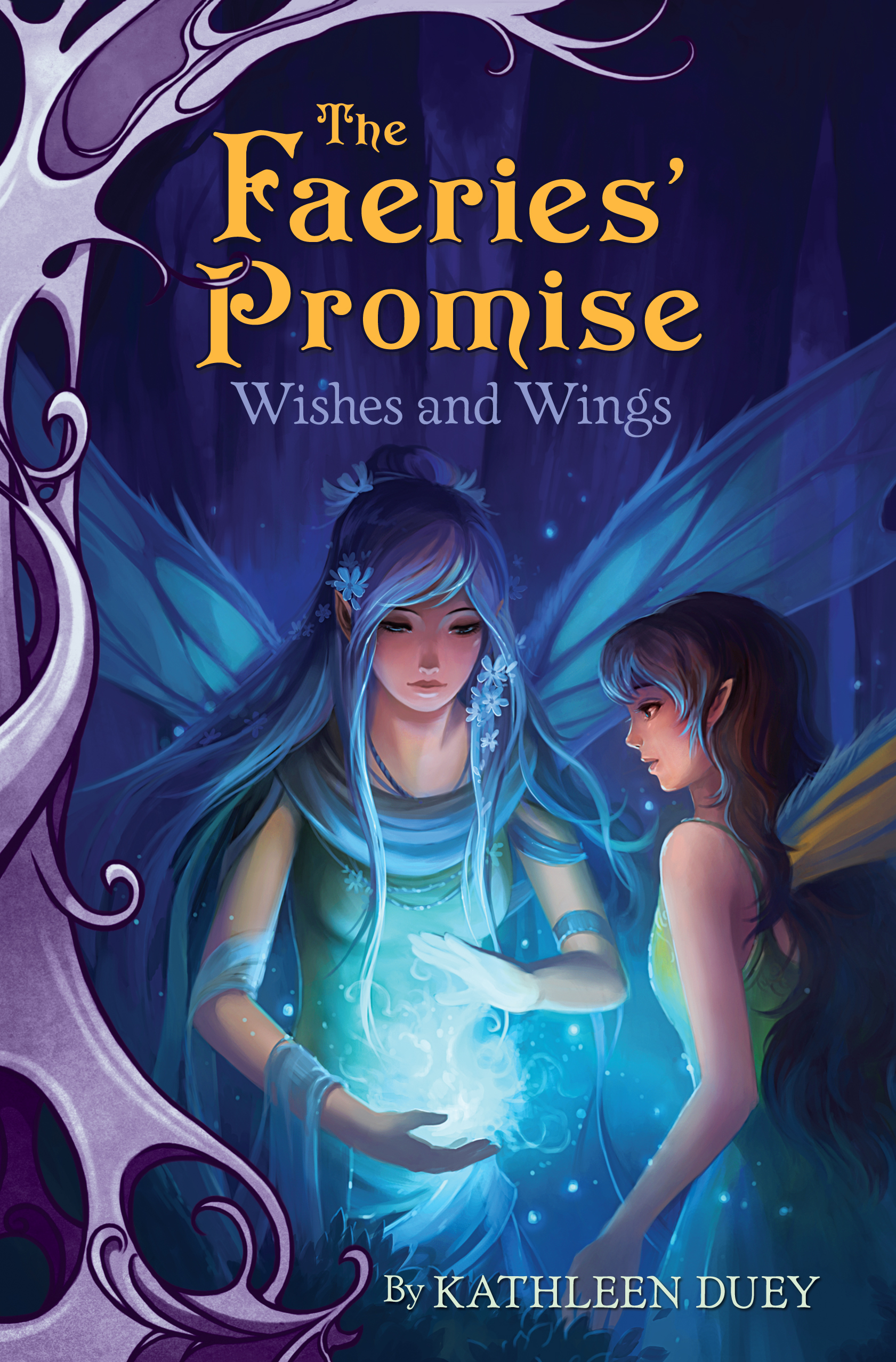 Alida has escaped Lord Dunraven’s castle and defied his law to find her exiled faerie family. Using new magic to protect themselves, Alida and her family make the dangerous journey home, back to their beloved meadow near the human village of Ash Grove. When Dunraven’s greed threatens the villagers with starvation, Alida wants to help them. But if Lord Dunraven’s guards find out that fairies are helping humans, her family will be in terrible danger.

It was a chilly morning.

The faeries were lining up, getting ready to leave. Everyone was busy. Gavin was helping carry crates of food.

Alida was scared and excited all at once. It was wonderful to be back with her family after all the years she had spent alone, locked away in Lord Dunraven’s castle.

It had eased her heart to finally tell her parents about the silent little room in the stone tower and about her friendship with Gavin. She told them how he had risked his life to help her escape—and that she had freed him from Lord Dunraven’s prison.

Her father said he was proud of her. Her mother hugged her and told her she was brave.

Her mother had decided it was time for them to return to the meadow near the human town of Ash Grove—which meant they would be breaking old Lord Dunraven’s law.

Sooner or later his great-grandson would find out. Alida was so afraid he would send his guards to find her.

The thought of even seeing the guards again scared her breathless. The idea of being taken back to Dunraven’s castle terrified her.

Alida glanced at her mother.

She was walking fast, checking things, making sure the faeries were lining up, getting ready to begin the journey home.

Alida was glad her mother would be leading the way. She had planned everything.

She had insisted that all the faeries wear clothing the color of oak leaves and grass and evening sky—so they would be harder to see in the forest shadows. She had even asked the weavers to make a brown shirt for Gavin.

It was still easy to spot him near the end of the line, though surrounded by her aunts and uncles. Eleven-year-old human boys were taller than faeries, even the grown-ups.

Alida looked into the faces around her. Almost everyone was smiling.

They had hated living so far from their home, and they all had long lists of things that they missed. Her aunt Lily wasn’t sure they should defy Dunraven’s law by going home. But she agreed the berries here weren’t as sweet as the ones in the woods near Ash Grove.

“Almost everyone seems happy to be going back,” Alida said when her mother came to stand beside her. “Except Aunt Lily.”

Her mother smiled. “My sister is opinionated, and she isn’t the only one who thinks this might be dangerous. But it’s time to go home. If we do, maybe one day the dragons and the unicorns will decide to go back too.”

“I hope so,” Alida said. “I saw unicorns from Lord Dunraven’s tower once. They were beautiful.”

Her mother smiled again. “It makes me very glad to know that. I was afraid they were all gone from the forests forever.”

“I wonder where the dragons are,” Alida said.

“Don’t worry,” her mother told her. “They’re hiding somewhere, too. They have to be.”

Alida watched her mother walk back down the line, stopping to answer questions, bending low when a little blue-winged boy tugged at her sleeve. She wasn’t dressed in a fancy gown this morning; she didn’t look like a faerie queen. She looked like someone on her way to work in a garden.

Alida spotted her father at the end of the long line.

He had helped the weavers make magically strong harnesses for their goats. The wheelwrights had made stout little carts for them to pull.

Those carts were all lined up now, loaded with everything the faeries would need. Two of them were stacked with cheese and all the food from their root cellars. They had taken apart all their graceful wooden tables and packed them with care too.

Their big wooden plates and cups were heavy, though, so they were in strong willow baskets tied to the sides of the carts.

They had packed their precious glass jam jars too.

Alida remembered them from when she was little.

They had only thirty of them, a gift from a human farmer’s wife long ago.

Alida fidgeted, watching her sister peer into one of the carts, checking her harp.

All the faerie instruments had been wrapped in soft quilts, then packed very carefully.

Alida wished they could play music as they traveled.

It had always lifted everyone’s heart.

But she knew it wouldn’t be safe.

Someone might hear the music—and they had to stay hidden.

Alida’s mother had explained it to everyone the night before.

If Lord Dunraven was looking for them, he would almost certainly expect them to go deeper into the woods to hide.

He might think they would go as far as Lord Ermaedith’s lands or even farther.

The last place he would expect them to go was the meadow he knew about—the one faeries had lived in for thousands of years.

That meadow was barely a two-day walk from the village of Ash Grove.

And Ash Grove was only a three day journey from Dunraven’s castle.

Thinking about it like that made Alida feel cold and shaky.

Then she heard her mother’s voice, clear and strong.

“Parents will carry their babies,” her mother was saying. “Anyone who needs help will get it. The elder faeries can take turns riding in the cart with benches. Our oldest children will be leading the milk cows. We have brought flasks of rainwater. Use it sparingly, and we might not have to drink from streams.”

When she finished, there were many questions. Once she had answered them, she looked at Alida’s father.

He stepped forward. “Anyone who needs anything can ask me. I will walk last in line, to make sure no one gets lost or left behind.”

Alida saw everyone nodding, getting used to the idea that they would be walking.

They all could have flown, of course.

They could have carried everything through the air, including the elders and the babies—even the goats and cows. But Lord Dunraven and his guards were always prowling, watching the roads and the sky. So the faeries would use mostly the narrow, hidden paths the deer and the wolves used.

The cows and goats could graze along the way. The faeries would be able to pick wildflowers to eat and her mother had brought cheese for Gavin.

He had offered to walk ahead of them where they were most likely to see humans. Alida watched him. He was smiling, nodding at something someone had said. The faeries had been scared of him at first. Some of them had never seen a human. Now they understood why he was Alida’s best friend.

His grandmother lived in Ash Grove with her oldest friend, Ruth Oakes. They were both kind and brave, and without them Alida might never have found her family.

“Are you all ready to begin our journey?” Alida’s mother called out.

Most of them, anyway.

Now that the time had come, the ones who weren’t sure were grumbling. One of Alida’s oldest uncles was frowning. But when Alida’s mother began to walk, everyone followed.

More books in this series: The Faeries' Promise