Frank Fox came to the United States from his native Lodz, Poland in 1937.  During the War he served in Military Government in France and Germany.  He earned a doctorate in history from the University of Delaware and taught at Temple and West Chester University.  He was the recipient of multiple research grants from the American Philosophical Society and the Eleutherian Mills (DuPont) Foundation.

His writings have appeared in a variety of scholarly and popular publications, including: French Historical Studies, Pennsylvania Magazine of History and Biography, East European Jewish Affairs, New York Magazine, PRINT, The World & I, and Affiche.

Frank’s New York Magazine cover story (September 9, 1974), titled, Why Nixon Did Himself In!, was a behavioral examination of Nixon’s Need To Fail.  The story, with its cover illustration of Nixon hanging himself, was a sales spectacular for the publication.

The Philadelphia Port of History Museum in 1984, held an exhibit of his Polish Poster Collection.  By special arrangement, Drexel University acquired the Frank Fox Collection, consisting  of hundreds of original, spectacular Polish Posters and they have held multiple exhibits of his collection.

He also contributed a chapter on Polish Poster Art for Tony Fusco’s reference work “Posters” (New York, 1994).  His essay “Poland and the American West” was published by Washington State University Press and in Western Amerykanski, a catalog for his 1999 exhibition of a part of his seminal collection of Polish Posters at the Gene Autry Museum of Western Heritage where he was the Guest Curator.

Dr. Fox had edited and translated from Polish,  a controversial wartime memoir, Am I A Murderer? Testament of a Jewish Ghetto Policeman published in 1996 by Harper/Collins, and has written poetry for a cantata based on that work, which premiered in Philadelphia in 1977.  This moving cantata was performed by bass voice, flute, piccolo, clarinet, bass clarinet, violin, viola, cello and piano with the score by Sylvia Glickman and Frank wrote the libretto.

In 1996 he was Guest Curator at the Katonah Museum of Art (Katonah, NY) where he mounted a breakthrough poster exhibit of his combative Solidarity-era Polish Posters entitled, Combat on Paper. He created a whole publication explaining the background and significance of the posters in the exhibit.

In 1998 he was invited to lecture at the National Museum in Warsaw on the occasion marking the 30th anniversary of the Polish Poster Museum.

His 1999 book, God’s Eye, Aerial Photography and the Katyn Forrest Massacre (West Chester University Press) gave historians worldwide a new perspective on the culprit of this wartime atrocity on Poland.

He was awarded the 2000 Josef Casimire Hofmann Award by the Polish Heritage Association of the Southeast for his lectures and volume titled "Combat on Paper" on Polish Poster Art.

He was also awarded the 2004 Distinguished Service Award by the American Council for Polish Culture in recognition of his scholarly contributions to promote awareness of Polish culture to fellow Americans. 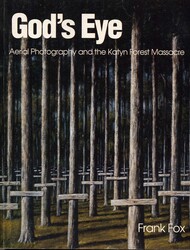