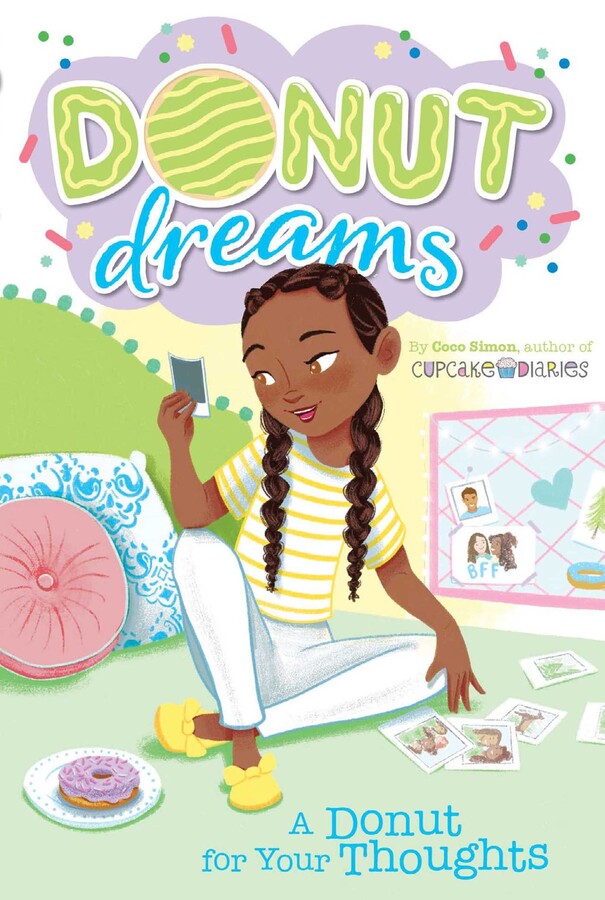 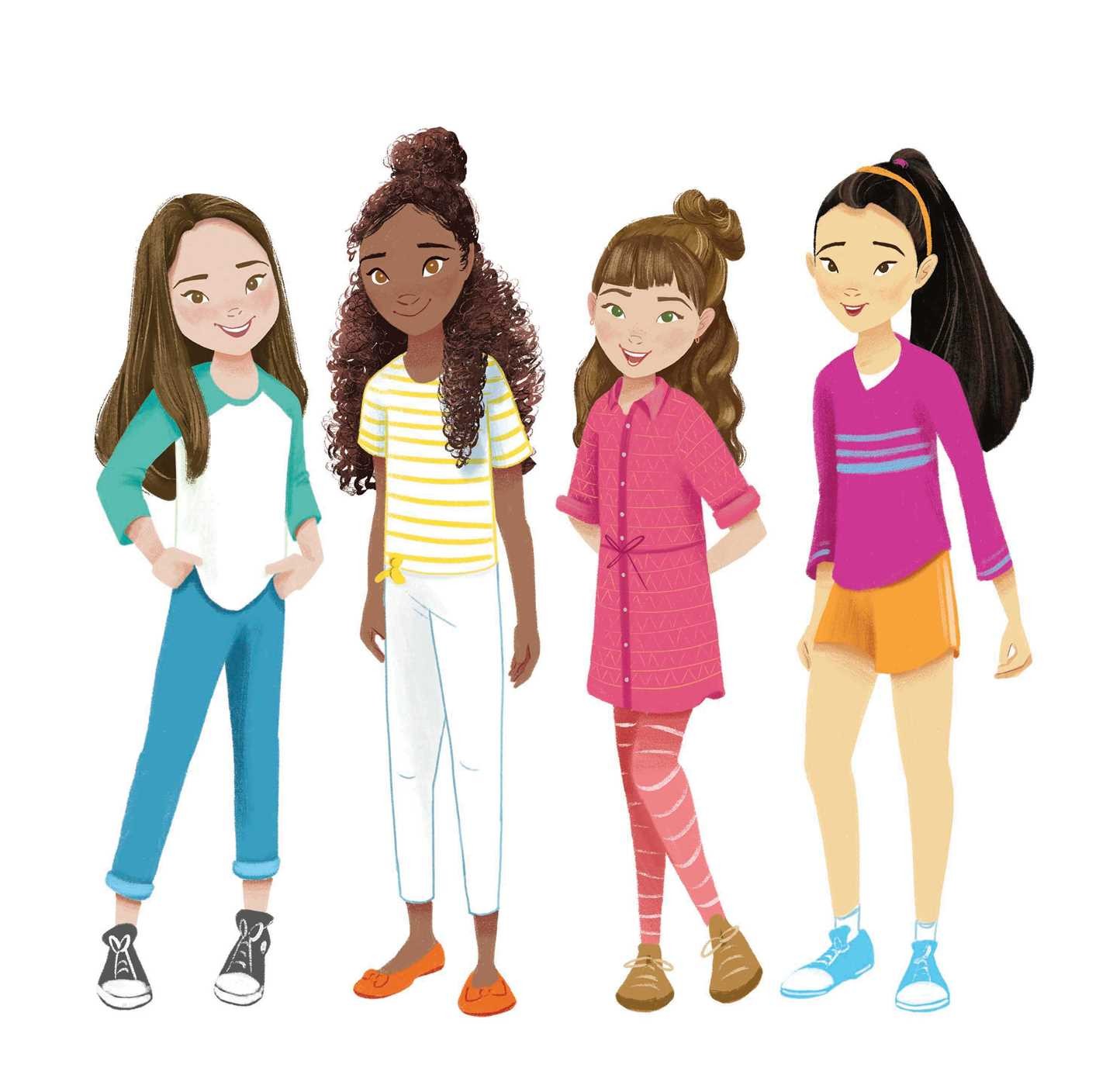 A Donut for Your Thoughts

Casey adjusts to unexpected changes in the fourth delicious book in the Donut Dreams series from the author of the Cupcake Diaries and Sprinkle Sundays series!

Everything’s better with a donut.

Casey thought that coming back from sleepaway camp would mean picking up right where she left off. But when she gets home, it seems like everyone has changed at least a little bit—even her BFF Lindsay. Not only that, she made a new friend at camp, a boy named Matt. Casey can’t decide for sure if she likes him as a friend, or if she like-likes him. And Casey’s middle school has a tough assistant principal…her mom! With so many changes stirring things up, will Casey find herself in a sticky situation?

Chapter One: The Dream Team

Chapter One The Dream Team
“Casey Peters to the rescue! Yasss!”

I hung up the phone and tossed it onto the bed, pumped the music up loud, and danced around my room.

It was Monday after school and I had nothing planned, so I was excited to get called in to work with my BFF, Lindsay Cooper, at her family’s restaurant, which also happens to sell the most delicious donuts ever made.

Back in the day, Lindsay’s grandparents, Grandpa and Nans Cooper, opened the Park View Table, which is now a booming family business in Bellgrove, Missouri. True to its name, it sits right across the street from and has a dashing view of, you guessed it, the park!

Between Nans’s finesse in the kitchen and Grandpa’s tight ship on the floor, the Park is the only restaurant in town worth talking about, with its legit menu and flawless service.

Nans initially started the Donut Dreams counter in the Park to stack enough dough (so to speak!) to send Lindsay’s dad, their oldest child, to the university of his dreams. Unlike his brother and sister, who stayed close to home, Mike Cooper ended up going away to school in Chicago.

There, he fell in love with Lindsay’s mom, Amy, and traveled to Europe with her. Amazingly, out of all the places they could have chosen to live in this whole wide world, they came right back to Bellgrove to put down roots and have kids—Lindsay and her younger brother, Skylar, aka. Sky.

Lindsay’s dad took over Donut Dreams, and Lindsay’s mom became an art teacher at Bellgrove Middle School until she passed away a few years ago.

My mom says it was Amy Cooper’s choice to settle here instead of some big city or foreign land. Mom knows this because my mom and Lindsay’s mom were the original BFFs! They even ended up having Lindsay and me at the same time, literally. Lindsay and I first mingled cries in the hospital, since we were born one day apart. Our oldest photo together is with our moms in the hospital nursery. And the rest is history.

My mom loves to tell me how Lindsay and I used to stare at each other in the hospital and smile and coo to each other. She just assumed we were just friendly babies, but we never did that with anyone else.

Then a few weeks after we both were home with our families, my mom brought me over to Lindsay’s house for a visit. She says the minute we saw each other again, we reached out for each other and cooed and giggled and laughed. True BFFs from the start!

I guess Lindsay’s mom actually preferred the charmed small-town life that Lindsay and others hope to escape. I totally understand why Lindsay wants out—going to school with the same kids since kindergarten, everyone is always in your business, that sort of thing.

But small-town life also has its perks. Not only delectable donuts, but also this feeling of safety and being known by everyone you see.

The truth is, Donut Dreams is more than just a pretty name for a donut spot. People patiently wait in line here just to sink their teeth into the pillowy sweetness of a banana cream or elderberry jelly donut.

Without Nans’s bright idea, Lindsay’s parents would never have met in Chicago, which means my best friend wouldn’t be my best friend, because Lindsay wouldn’t even be a thing in my life.

And where, oh where, would I be without Lindsay Cooper?

I feel honored to be the only non-family member who works at the Park on days like today, when one of Lindsay’s cousins has a cold or a big exam.

All of Lindsay’s aunts, uncles, and cousins are employees at the restaurant. The only family member of hers who isn’t recruited to work at the restaurant is her brother Skylar, aka. Sky, who’s nine.

I pranced over to my dresser and pulled out my yellow Donut Dreams T-shirt, the back of which read THE DREAM TEAM. Thankfully, I keep my room pretty neat—except for the closet and under the bed, that is—so I wasn’t tripping over stuff looking for my stretchy jeans when my mom popped into my room carrying a load of clean laundry.

My mom is the assistant principal of Bellgrove Middle School, where I just started going this year. Ever since she got her back-to-school hairdo, I admired how her reddish-brown ringlets framed her perfect round face.

“Casey, it sounds like New Year’s Eve in here!” she was shouting. “What’s going on?”

I lowered the music. “They need my help at Donut Dreams today,” I said. “Is it okay if I work for a few hours, Mom? Pleeeease?”

I already knew what the answer would be. As long as I ace my schoolwork and keep my room somewhat tidy, any opportunity I have to be responsible is all right with Laurie Peters.

“I hope you’ll always be this enthusiastic about work,” Mom said with a laugh. “Go ahead and make some dollars… not eat empty calories!”

Mom knows me to a T. Lindsay and I always manage to sneak in a donut or two when no one’s looking.

Mom left my room, and I went back to zipping around in search of my comfiest jeans to wear (why is it that even though my room is pretty neat, I can never find what I want to wear when I want to wear it?).

I finally found them and paired them with the bright Donut Dreams shirt that makes me feel like a superhero whenever I slip it over my head.

Even though I see Lindsay all the time, it was still exciting to work with my BFF. Plus, every time I was at Donut Dreams, I felt inspired.

Let’s just say, there’s something dreamy about spending time in a place so creative and colorful!

A Donut for Your Thoughts