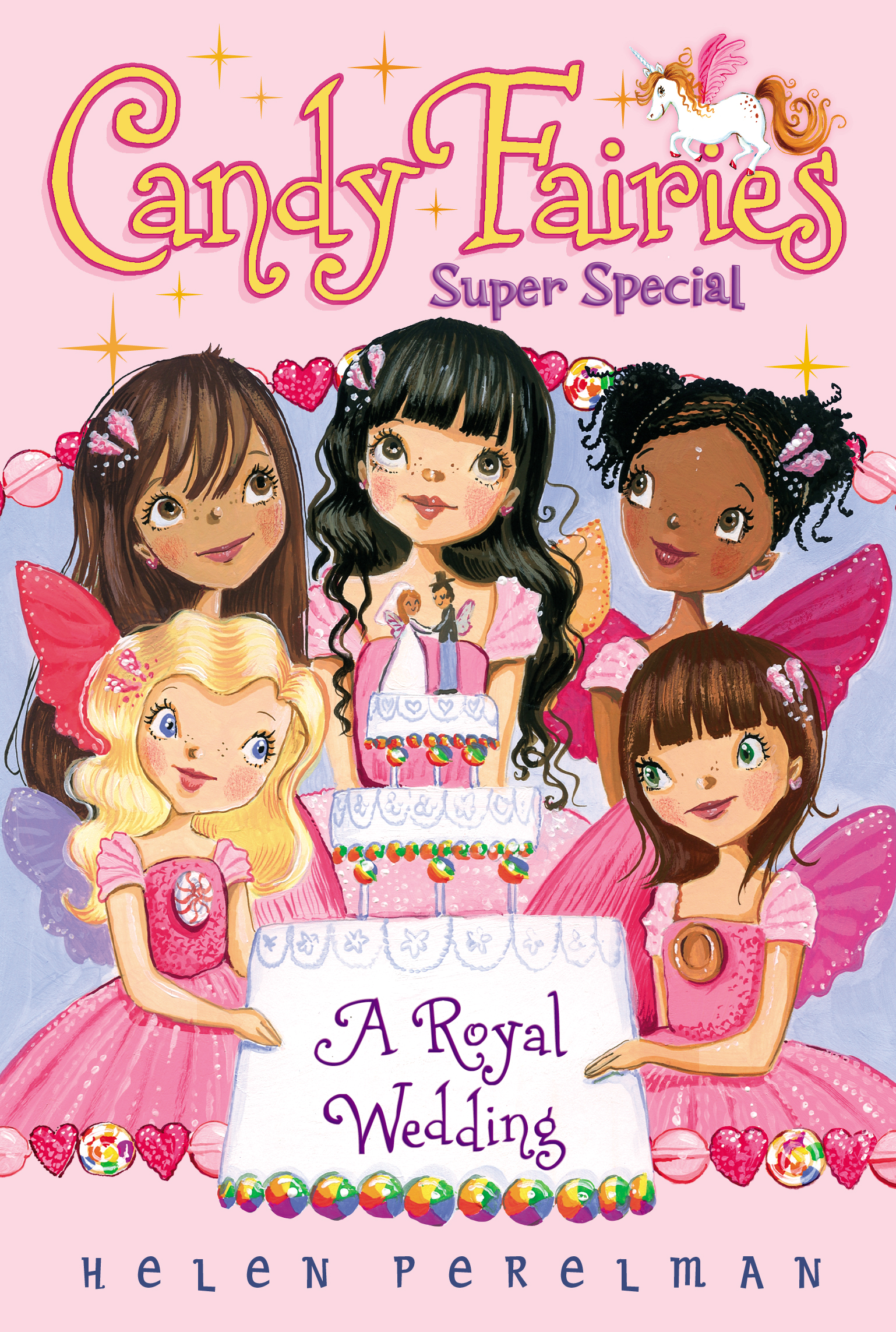 Take part in the sweetest celebration Sugar Valley has ever seen in this Candy Fairies super special!

Princess Lolli is getting married! From the engagement party to the wedding, from the bouquet to the dress, there is so much to be done—and the Candy Fairies are eager to help. At first the Candy Fairies aren’t sure they’ll be invited, but then Lolli asks them to be her Gumdrop Girls (aka flower girls) and to make her beautiful lollipop bouquet! But preparation for the royal wedding won’t be without its up and downs…

This extra-long Candy Fairies adventure is full of delicious details and fanciful festivities!

The Big Scoop
Melli the Caramel Fairy swooped down to the sugar sand beach at Red Licorice Lake. The sun was slightly above the top of the Frosted Mountains. She knew she was early for Sun Dip and her friends wouldn’t be there for a while. Sun Dip didn’t officially start until the sun started to sink behind the Frosted Mountains. Melli fluttered her wings. She couldn’t wait to share her news!

Spreading her blanket, Melli smiled to herself. She had made fresh caramel hearts for a Sun Dip snack and displayed them on a plate. Sun Dip was her favorite time of day. The colorful sunset in Sugar Valley was the perfect time to be with friends. And Melli had the best four friends in the world.

She didn’t have to wait too long for her Chocolate Fairy friend Cocoa to arrive. Cocoa’s golden wings were easy to spot in the late afternoon light.

“I thought I was going to be first today,” Cocoa said. She looked at her friend. “You look like you are bursting with some sweet news.”

Melli giggled. “I am!” she squealed. “The most delicious news!”

“Hold on!” Raina the Gummy Fairy cried from above. “I have the most scrumptious news of all!”

Dash the Mint Fairy whizzed past Raina and landed next to Melli. “Gee, everyone is extra-early today,” she said. “What’s the great occasion?”

“They have news to share,” Cocoa said, nodding to Melli and Raina.

“Well, spill!” Dash said as she settled down on Melli’s blanket. “Please don’t tell me we have to wait for Berry.”

Berry the Fruit Fairy was almost always late to events. Her friends knew this about her and always expected her to be the last one to arrive.

“She’s probably trying on some new outfit,” Dash said. Dash was more interested in sledding and speed racing than in all the fashions that Berry liked to talk about.

“Maybe,” Cocoa said. She looked over at Melli. “I don’t think Melli and Raina are going to be able to wait. Go ahead, Melli.”

Dash pointed her wings at Melli. “But Melli was here before you. She should share first.”

Sitting up straight, Melli grinned. “Well . . . ,” she said slowly. She wanted to savor the moment. “Princess Lolli wanted to work on a new caramel-apple dipping technique for the Caramel Moon Festival,” she said. “And she chose me to help!” Melli’s wings flapped and she lifted off the blanket. “I am going to Candy Castle in a couple of weeks so I can meet with her. Today I have been trying different kinds of caramel for the dip.”

Cocoa flew over to her friend and gave her a tight squeeze. “I am so proud of you!” she said. She knew Melli loved the fall festival, which happened during the full moon in the tenth month of the year. One night of the year, the candy corn crop was picked under the full Caramel Moon and there was a big festival celebration.

“You are so lucky,” Dash told her. “It’s not often that anyone gets alone time with Princess Lolli.”

Dash looked down at the plate in front of Melli. “Are these fresh caramels?” she asked.

Melli laughed. Dash might be the smallest fairy, but she had the largest appetite. “Yes,” she replied. “I couldn’t use this batch for the dipping because the caramel was too hard, but it was perfect for shaping hearts.”

“Yum!” Dash said. “I think I am going to love this special project of yours,” she added.

“I will be making lots of caramel,” Melli said proudly.

Raina stood up. “Now it is time for my news!” she exclaimed. “I’m sorry Berry still isn’t here, but you are not going to believe this announcement.”

“Announcement?” Cocoa asked. “What are you talking about?”

Raina took a deep breath. “I was at Candy Castle this morning,” she said. “And I saw this!” She took out a copy of the Daily Scoop. “It’s a special edition because this news is so delicious!”

Dash, Melli, and Cocoa crowded around the newspaper that Raina laid on the ground before them.

On the front page of the newspaper was a large photo of Princess Lolli and Prince Scoop. The headline across the top of the paper read A ROYAL ENGAGEMENT!!

“Can you believe Princess Lolli is engaged to be married?” Raina cooed. “Isn’t that the dreamiest thing ever?”

“ ‘The fairy princess is going to marry the fairy prince of Ice Cream Isles,’ ” Cocoa read aloud. “ ‘Prince Scoop is the son of Queen Swirl and King Cone. There has not been a royal wedding in Sugar Valley since Princess Lolli’s parents, Queen Sweetie and King Crunch, were married. This is going to be a supersweet celebration.’ ”

Berry had landed next to Raina, her large pink wings fluttering to a stop, just as Cocoa read the headline. Now her smile disappeared from her face. Cocoa turned to her. For someone who had just heard about Princess Lolli getting married, Berry didn’t look as happy as she’d expected.

“Berry, did you hear Raina’s news?” she asked.

Berry grimaced. “It’s not Raina’s news,” she said. “It’s Princess Lolli’s news!” She turned to look at Raina. “When did you hear? The engagement was announced just today.”

Raina pointed to the newspaper. “I was at Candy Castle this afternoon and I got the latest issue. Hot off the presses!”

Berry reached into her bag and pulled out her copy of the special-edition Daily Scoop. “I got the same news,” she said. “Only, you got to tell everyone first,” she added quietly.

“Raina really scooped you with the news about Scoop,” Dash teased.

Everyone laughed but Berry. She didn’t think that was so funny. She had wanted to spread the news of Princess Lolli’s wedding. A royal wedding was a very big occasion. Her head was spinning with fashion details and all that sugary royal glamour!
Helen Perelman